Space, the final frontier. Life on a starship can be stressful, from the long hours to the various cosmic level threats; sometimes, you just need to take a break. But this is Starfleet. Nothing can be done halfway. If you are going to relax, you gotta call in the special spa ships designed for relaxing. So leave your phaser behind, don’t use your tricorder (you’re getting a break after all!), and join us as we give you five thoughts on season 3, episode 4, “Room For Growth.”

One of the joys of a show like Lower Decks is that it allows us to see the aftermath of adventures that a Starfleet crew experiences. We’ve already seen how you deal with an evil alien entity turning your ship into an ancient tomb in the Next Generation episode “Masks.” “Room For Growth” is more interested in what happens after the credits roll. It turns out; that it’s a lot of work for one branch of the crew.

“Room For Growth” starts with engineering working practically around the clock for a week straight, fixing the changes by the alien-controlled Captain Freeman. While there have been plenty of moments where we follow the engineering crews of the various Starships we’ve journeyed with in the past, Lower Decks showcases just how much of the heavy lifting this crew has to do. Not only do they have to fix the systems that the visitor screwed up, but they also have to transform sacrificial alters back into control units, pull off temple panels, and ensure the ship is working in tip-top shape. Needless to say, they are tired, so Freeman orders that they destress by taking a spa day.

2. The treachery of Delta shift.

After the random mention here and there over the past two seasons, we finally meet the Delta Shift, the arch-rivals of our beloved ensigns. While they’re not quite a mirror to Boimler and the gang, there is a striking resemblance between the two factions. “Room For Growth” is mainly about a competition between the two groups of ensigns when they hear about the announcement of a room lottery.

Again, one of the benefits of a show like Lower Decks is the opportunity of seeing how the other half lives. While on main series shows, we are given glimpses into the private quarters of the crew, a chance to let their hair down, as it were. For the Cerritos ensigns, it’s a bunk city. Simple conflicts like Delta Shift trying to rig a lottery to get their own private rooms to make this show feel unique. For an ensign, having your room is quite the privilege, a chance to get some peace and quiet. But “Room For Growth” shows that having a room means breaking all the rules for some.

3. You can take the engineer out of engineering…

While Mariner, Tendi, and Boimler try to rig the room lottery to their favor, Rutherford and the engineering crew get some much-needed (incredibly forced) R&R on the DOVE, a floating spa. Much of the humor of these sequences come from the fact that, despite an order from their Captain, it seems that the engineering staff just has no concept of chill. Through a series of vignettes, “Room For Growth” shows the engineers fixing a stuck door, using a zen garden to create schematics for improving the ship’s engines, and using cucumbers to trick the stress bands into showing they are relaxed. While this is all well and good, Freeman has other thoughts.

Most of the humor from “Room For Growth” is Captain Freeman’s increasing frustration from watching her crew not calm down. While it’s funny seeing Freeman lose her cool and watch the puppy therapy do nothing for her, it does contribute to a rising concern that’s been building over these past couple of episodes. Has something happened to the command staff? Maybe I’m seeing things that aren’t there or overanalyzing things, but something just seems off about (specifically) Ransom and Freeman. Again, it’s the little things, how she tenses at the mention of the ship’s recent trauma being her fault. The anger that her generous gift isn’t appreciated. It all just feels different from previous seasons.

4. An unconventional tour of the Cerritos

While the engineers fail to relax, Boimler and the gang execute their shortcut to the panel to rig the room lottery, which takes us on a tour of some of the areas of a starship we don’t get to explore. Lower Decks loves throwing crazy new things onto a starship, and “Room For Growth” continues that tradition. From swamp rooms that produce hallucinogenic gas to the area inside the deflector disk with lower gravity, there are plenty of fun little mini adventures for the gang (and even an opportunity for Boimler to let his hair down.)

Of course, all of these little vignettes go wrong for the team. From Shaxs and T’Ana’s violent foreplay on the holodeck to Boimler almost torn apart by the deflector disk deflecting asteroids, “Room For Growth” is full of setpieces that are visually creative while also being funny. The hallucination sequence, in general, is incredibly vibrant and fun and shows what you can achieve on an animated Trek show.

5. No one gets left behind.

While the team eventually has some light bonding with the Delta shift, it’s simply another ploy to trick the Beta shifters. But when they make it to the panel, the crew makes a horrifying discovery. It’s not four rooms on deck one. It’s one room on deck four. This presents a quandary for the team, who among them is going to get the room? “Room For Growth” serves as another affirmation of the team’s love for one another. They would rather stay together in the bunks, as a team, instead of one person being away from the action. It’s a sweet moment that is, of course, immediately undercut.

While Delta shift gets the room, instead of one person taking it and leaving their friends behind, the four decide to share and make a cool clubhouse. It’s an excellent undercutting of the big heartfelt moment at the end of the episode, a partially broken Aesop that only a comedy show can pull off. While the team strengthens their bond in “Room For Growth,” the room might be a point of contention for at least a week or two.

So there you have it, from a vacation gone wrong to a pointless adventure, the Cerritos crew is at it again. What did you think of the episode? Sound off below, and we’ll see you next week! 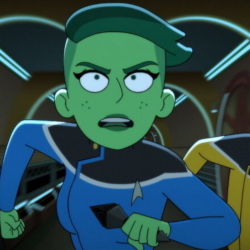 Space, the final frontier. California-class ships don’t often get called to the big leagues, but they get a chance to shine from time to time; if it’s at one of Starfleet’s most famous bases, all the better! While it might just be a gift delivery negotiation, a critical mission is still important, damn it! So […] 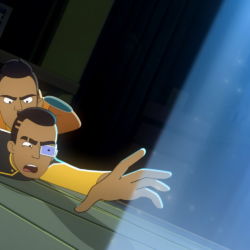 Space, the final frontier. For the crew of the Cerritos, life can be pretty thrilling. From crystal-loving alien attacks to Pakled schemes, it’s probably one of the most exciting second-contact assignments. Still, no ship is above its grunt work, and the Cerritos is no exception. In true Lower Decks fashion, we get to see a […] 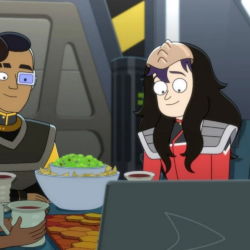 Space, the final frontier. While the Cerritos is back in action, things for Beckett Mariner have gotten pretty dire, as her more or less arch rival is in charge of every element of her day-to-day life. With her Starfleet career on the line, Mariner has to toe the line, no matter how bad the situation […]