Episode 5 of What If…? promises Zombies. It delivers Zombies. Lots of zombies. So many zombies. If you love zombie stories, this is a good one.

Yet, there were things that even I liked about What If…Zombies?

Zombie stories would be horribly grim and one-note without humor. This episode remembers that immediately with the tone of the beginning, as Bruce Banner slowly realizes that his friends are eating people. Even the Watcher joins in with “Oof. That happened.”

My favorite jokes included Happy’s “I’m not single, I’m saving myself for Thor,” t-shirt, Okoye’s offering of hand sanitizer to Hope, and Bruce hitting himself to bring out the Hulk.

There’s also the wonderful “how to survive a zombie apocalypse” video made by Peter, the constant one-liners from the survivors, and the hilarious Scott Lang. Or, I should say, Scott’s head in a jar cracking dad jokes.

An end-of-the-world story also must contain noble sacrifices made for the good of humanity. In this story,  Wasp’s death, which clears the way for the last survivors to reach safety, and Okoye’s “Wakanda Forever”  hit the hardest. But there are other moments as well: Vision giving up the Mindstone because he believes he’s failed humanity, Bruce’s decision to stay behind hoping the Hulk can survive a zombie horde, and Happy’s quiet “blam.”

These deaths should not be in vain. But given the ending, they probably are. If you want to know why I hate zombie stories, this is part of the reason why.

Perhaps it’s because I’ve been through numerous Parker Spider-Men in my lifetime, including four live-action actors, but I didn’t miss Tom Holland. Hudson Thames is an admirable replacement. He’s hilarious in the handmade short film, “So You Wanna Survive the Zombie Apocalypse.” But when he opens out to why he believes humanity can survive, it’s beautiful. You believe Peter can be the one to bring the world back to life.

Of course, this being a zombie story, that optimism may be misplaced. But the point of these tales is not for the good guys to win but to showcase how some can find hope in the darkest times.

I’m still not sure what to make of Stan’s voice work. The lines “I should be sad but I’m not,” regarding Sam’s death, and “I guess this is the end of the line” to zombie Cap are oddly lifeless and I have no idea how to read them.

4. What about that Hope? Why is it always her fault?

This is the second of five episodes in which Hope’s choices led to horrific events. First, she’s fridged in episode three, “What If Earth Lost Its’ Mightiest Heroes?” and now she’s the one who helped bring her mother back, complete with the zombie virus. She’s also used for puns twice in this episode.

That’s a high percentage right now of Hope causing problems for this series, especially combined with the fridging that also led to the universe being destroyed in episode 4.

What If…? has nine episodes total for this first season. Let’s hope they mix it up a bit more.

5. There are plot holes.

The biggest one that comes to mind is Vision’s decision to destroy the Mindstone before our remaining heroes can get away. Vision says he wants to atone but wouldn’t it be better to wreck the Mindstone, thus unleashing the zombies, after the jet takes off?

I also have a lot of zombie questions. For instance, these zombies seem to need to eat. But if everyone is turned into a zombie, there’s no fresh flesh for them. So how are they surviving? Do they just eventually disintegrate if there’s no living beings to eat? Another question: how much brain power do they retain? Most of the zombies shamble around but Cap still knows how to use his shield, Hawkeye can still fire arrows, and Tony can obviously still work the Iron Man suit. And, of course, there’s Wanda who can still seemingly call on her power even though she’s dead. That implies the virus doesn’t kill everyone because, if it did, the souls would be gone and Wanda’s magic presumably wouldn’t work.

Still alive works, too, to explain Scott’s head. Wait, no, it really doesn’t. Sure, his body is cured but how does it survive without any support system? I suspect the answer is that the writers thought that a headless Scott Lang was funny. And it is but…?

I’m overthinking this, yes? Another reason why zombie stories don’t work for me.

A final, bonus note regarding T’Challa.

He survives this episode, a relief because I had no desire to see him die on-screen. But among his last words in this episode are: “In my culture, death is not the end.” I don’t know if Boseman’s T’Challa will appear again in this series but those are fitting final words for him. 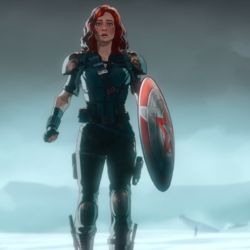 Five Thoughts of What If…? Episode 9 “What If the Watcher Broke His Oath?”

The Watcher has a soft spot after all. But not for Killmonger. 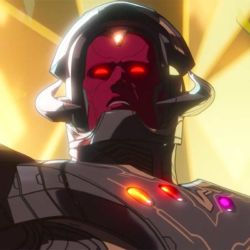 Five Thoughts of Marvel’s What If…? “Ultron Won?”

What does UltronVision want to destroy? Oh, just the Multiverse. 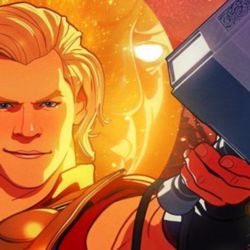 Five Thoughts on What If…. “Thor Were An Only Child?”

All Thor wants to do is fill the world with a party. Is that so wrong?