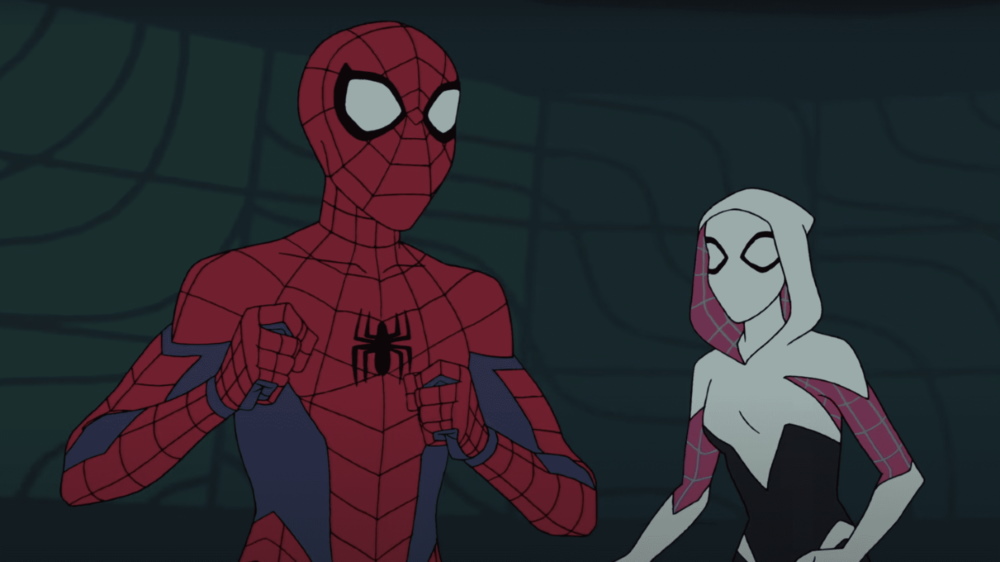 Hello there, true believers! Thanks for swinging by for another installment of Marvel’s Spider-Man: Maximum Venom on Disney XD. After saving the earth from the threat of the symbiote known as Venom, Spidey’s work is far from over! Being a teenage superhero can be hard, especially when your first date is ruined by a villainous attack! Pull up a web and enjoy as we give you five thoughts on season 3, episode 6, “Maximum Venom.”

1. With everything going ok, it’s time to celebrate!

It seems like everything is going pretty smoothly for Peter Parker at the beginning of “Maximum Venom.” He and his friends were able to take back Horizon High, his mentor Max Modell is back at the helm, and he’s even impressed Iron Man who offers him a full-time spot on the Avengers. While things aren’t perfect, it seems like the team has earned a well-earned party. While it’s clear that we’re not going to have 40 minutes of dance shenanigans, it’s a fun setpiece of the calm before the storm. Plus, who doesn’t like awkward promposals and awkward teens in suits?

Max interrupts to show his newest invention, a portal that can connect to anywhere, including Venom’s homeworld, revealing Max as Venom’s new host! While it wasn’t exactly the most graceful of reveals, (Max sweats a LOT in the early part of “Maximum Venom,”) it quickly establishes some important stakes. Venom is not back to assimilate the world, he’s back to destroy it, and this time he’s brought friends.

2. Maximum Venom (and his much more threatening sisters)

While Peter defeated Venom back in “Web of Venom,” it turns out that just enough had survived to infect Max Modell. While this time it took Venom longer to take control, the longer amount of the time gave Venom a realization that he could quietly control Max’s decisions. This was not a symbiotic relationship, instead, it has become a parasitic one. Venom’s explanation to Peter has some nice visuals of the slower takeover of Max, including the symbiote taking over the bloodstream and creating pitch-black eyes. The Venom of “Maximum Venom” is just that, a superior version of the symbiote with Max’s intellect and Venom’s brute strength.

Like other episodes of the third season, “Maximum Venom” creates scenarios for all of the members of the team to part of the action. This time, Venom brings three of his sisters from the home planet to recover the seed and destroy the planet. While the sisters look cool, there is very little to their personalities. Scream, Scorn, and Mania are just crueler, unhinged versions of Venom. The only thing that makes them at least a little bit interesting is that they seem pretty done with Venom, who has not only failed but has seemingly become pettily obsessed with a petty little feud. They were simply forces to be reckoned with rather than actual characters.

3. The Amazing Adventures of Grady and MJ

It was exciting to see Felicia Day join the cast as Mary Jane, but it was disappointing that the show didn’t do anything with her. It’s not like you need to have her get in a suit and swing into action, but all we know about her is that she a) plays basketball and b) says lines to Peter who then has “aha!” moments for whatever situation he’s in. It was a pretty thankless role for her. But “Maximum Venom” does correct the ship a bit by giving her and Grady a charming b-plot as they search for their dates in Horizon High. It’s always fun seeing normal people deal with the attacks of supervillains and this episode is no exception.

The fun comes from having them showcase their abilities to keep up with their super-powered peers. While Grady is a screw-up, he does use his intellect for some clever plans that mostly succeed, using his knowledge of the school to take them to the next level and MJ gets to use her athleticism to keep the Venom egg out of the hands of the sisters. Plus, the two characters just have wonderful banter, with MJ lampshading just how absurd Horizon High is and Grady trying his best to defend it. As far as b plots go, this was one of the more memorable ones this season.

4. An over the top end game that is silly in all the right ways.

Peter tries his best to break through to Max and remind him that all is not lost and he can fight back. Once again, there are some cool visuals in the mind space of Venom as Peter tries to reach out to Max, with Peter sinking into an endless void of ooze. But that is not what makes this end game over the top and silly, no, that honor goes to the SYMBIOTE SPACE DRAGON THAT VENOM SUMMONS TO NEW YORK! Yes, “Maximum Venom” features a multiple eyed space dragon that just starts to wreck Horizon High, even Peter has to stop and appreciate how that’s a new one.

There is also the triumph of Max finally snapping out of his funk and take control. Not only can he regain control of his mind, but he can also take advantage of the symbiotes strength and fight back against the menace he accidentally created. There is also the fun about hearing Fred Tatasciore, who voices the Hulk in many of Marvel’s animated shows, getting to say “smash” is his mild-mannered professor voice. The final conflict with Venom goes over the top in a lot of fun ways and just has that comic book climax feel that you want from a story with this many Venoms.

5. The future is what you make of it.

With Horizon High destroyed again, Max decides that perhaps it’s time to hang it up for a while. (Once again, this all does kind of work better when Horizon is a tech startup instead of a weird high school for teen geniuses.) At the beginning of “Maximum Venom,” Peter is presented with a choice from Iron Man, he can join the Avengers but will be sacrificing his friends and family. With the loss of Horizon High, the offer is tempting but Peter chooses a better solution.

With the help of Iron Man, Peter gets his team and a couple of other friends like Grady and Harry Osborn to start their own technology company called “W.E.B.” a place where they can continue to invent and create, but also work together as a team. This gives Peter a chance to have his cake and eat it too. They can continue to create and work together, even if they’re not all going to the same schools. It was a hard year for Peter and his friends, but their future is what they make of it.

So there we have it. ‘Spider-Man: Maximum Venom’ is in the books. It was interesting seeing them go to longer episodes and shorter seasons, some things worked but often felt rushed. In any case, it will be interesting to see Peter’s post horizon world and what the future has in store for the team. What did you think? Sound off below!