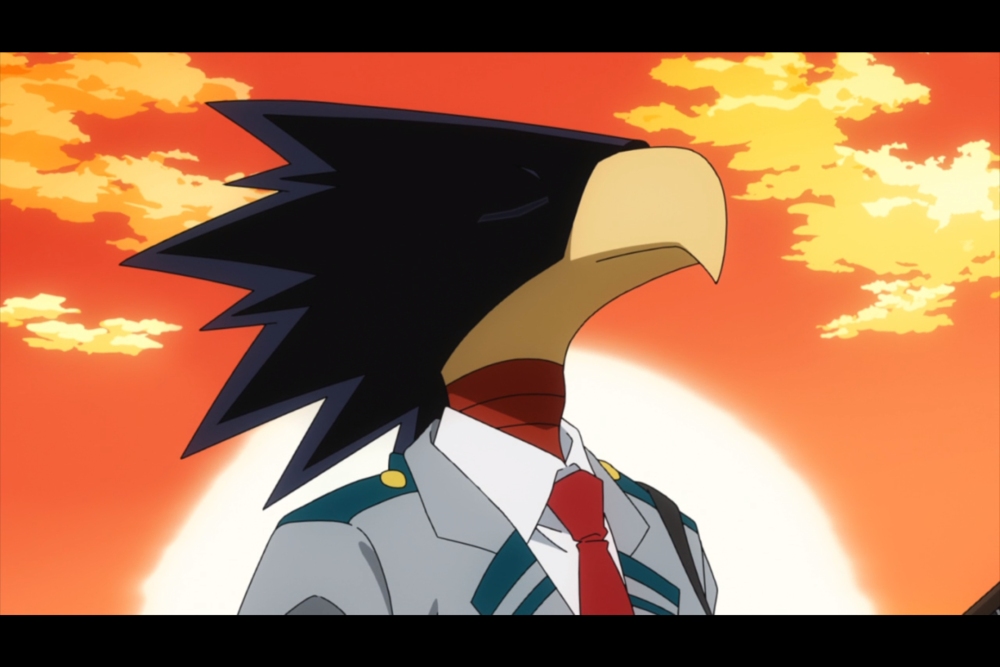 The arc continues this week, folks, as we see more of My Hero Academia and the students planning for the festival ahead of them. We see more of the… threat, I suppose, that the gang is completely oblivious to in Gentle Criminal, and some interesting plot points are revealed on this episode! Read on!

1. The small-time criminal
The episode opens with the increasingly adorable La Brava re-uploading Gentle Criminal’s videos to a new channel, as his accounts are regularly deleted due to the nature of his work. It’s this kind of attention to superhero detail that I love with MHA – like, yes, of course, it would be tough for an active criminal to become popular on the mainstream web, but I love the dedication that La Brava puts into making sure the video is up there for all to see. The fact that she can’t help but swoon and be in awe of Gentle Criminal’s first video every time is excellent character work, as well.

We also get a neat little tidbit that shows how well and how casually MHA handles worldbuilding. Gentle Criminal mentions the heroes of the world, whilst also bringing to light the fact that there are more criminal factions that just All For One’s empire: there’s Oji Harama the ‘Peerless Thief’ and the leader of the Meta Liberation Army, Destro (a possible reference to Marvel’s Mutant Liberation Front?). It’s a ton of fun to unpack!

2. What it means to them
One of the neat things explored in the last episode was whether the idea of having a festival at a school targeted by villains every second Tuesday is really a good idea. Ultimately, it came down to the 1-A kids getting supercharged full of emotion for the fact that the students outside of the hero course have had to suffer these hits without being directly related to the events going on, and so the gang decided to put on a show for their sakes. The show explores this even deeper in this episode, with Bakugo overhearing that those students in question felt like they shouldn’t be babied by the hero kids who think they can make it better.

It was an unexpected but refreshing take from a mainstream anime! We later see this idea explored from 1-A, and more specifically, Bakugo’s side, as he volunteers to join the band, acknowledging that while the other students may not want to be ‘saved’ in this way, Bakugo wants to do it just to spite them and that they need to do it for their own mental relief!

3. The scene that made me cackle on a public train
Soon, we start seeing the members of 1-A’s rockstar band take formation. Naturally, Kyoka is voted by the rest of the gang to participate, and she volunteers to play bass, but we also see some more unlikely picks come forward. A tidbit that I loved finding out about Bakugo’s past is that he was ‘forced’ to attend music lessons, and so he joins the band initially because he wants to prove to people that he can easily do a difficult thing like playing the drums. We then see a few others stake their claims at trying to be singer, with the leering Minoru and Aoyama trying and falling short pretty hard before we see Kyoka voted to give her shot.

I’m not sure if this was dubbed over with another singer’s voice, and I couldn’t easily find out, but Kyoka stuns the crowd with a song filled with English lyrics that float over us, with the students specifically calling it ‘sexy’ and ‘husky’. I also nearly cried laughing when we saw Minoru, Aoyama and the other potential singers so wildly and visually moved by how good Kyoka is. Definitely a gag worth watching for.

4. Control
We eventually see some more shots of people joining the band, with my personal favorite being Fumikage slaying on guitar like the closet emo-King that we all knew he was. Eventually, the show decides to go very School of Rock on us and involve everybody in the class in some aspect, like special effects or dancing, which is fine but very high-school traditional. The narrative then moves to Izuku having the first one-on-one chat he’s had with All Might in quite some time.

Izuku gripes about how he struggled to control 20% of his max power back in the Shie Hassaikai arc. In response, All Might decides that we’re at the part of the narrative where he can reveal more tricks to Izuku, like the idea of expelling long-range shots of strength. It’s very anime but I love it.

5. Eri’s back in town
Izuku continues to train with All Might, quickly discovering that he had already figured out the technique to off-shoot energy during his battle with Overhaul, which is a neat narrative style of overlapping training that I quite enjoyed. Having Izuku consider the ramifications of All Might using his power at 100% and completely nerding out over the numbers is a lot of fun, too. The show does a great visual representation of Izuku finally understanding this long-range power, with the great shot of tension-and-release that comes down to Izuku merely flicking his finger forward.

The episode ends in a super delightful way as we see Lemillion and Izuku taking Eri to meet the rest of the school for the first time, showing her on the first steps to rehabilitation. The relationship between Lemillion and Eri, in particular, is honestly beautiful and I get great big brother vibes from him.

That’s it for the week, folks! Let me know in the comments if you chuckled as much as I did at a seemingly insignificant part of the show!