We are more than halfway through the season and are starting to rocket towards an endgame. The pieces are falling into place, the characters are coming together, the plot lines are converging. Read on for our Five Thoughts and remember spoilers ahead.

1. Gully Troy is going to be a problem at the worst possible time

In the last episode, Alfred found out word of his affair with Melanie Troy has started to spread. He’s rightfully paranoid since he knows how dangerous her husband Gully can be. When we start this week Melanie is waiting for Alfred in his office at the club. After he pulls a gun on her in surprise he then uses the same smooth talk on her we saw last week. I’m not sure which is more dangerous. Somewhere along the lines it appears that Alfred has developed feelings for Melanie, but it certainly wasn’t shown on screen. His affair with her was part of his downfall a few weeks ago and now caring about her is apparently meant to show that he’s still a good guy.

Alfred and his mother are putting the finishing touches on packing up their house. Gully comes to pay a visit and offer Alfred the proverbial “one last job,” which Alfred smartly refuses. There is another inconsistency here. Gully knows that Alfred didn’t want to do the jobs in the first place. He only went along with the robberies to get the money to leave the country. So when Gully acts surprised and suspicious that Alfred isn’t interested in another job because of “a plane to catch” it doesn’t make sense. It just does the shorthand of letting Gully know something is up despite not having a strong logic behind it.

When Gully approaches Melanie about Alfred he has no way of knowing she’s involved. But somehow he knows and pushes Melanie to admit it. At first she plays it cool, but when he presses and starts to get violent with her she admits it. She admits it in the most graphic language she can trying to hurt Gully in the only way she can. Gully then proceeds to try and kill her. It’s a very violent scene and seeing a much larger man attack and beat a small woman was not easy to watch. Despite Gully’s training and size Melanie manages to stab him with some broken glass and make her escape. Even though she needs to run for her life she still has time to grab a coat and a scarf before she leaves. It’s chilly in London.

Melanie runs straight to Alfred for help and shelter. She knows she isn’t safe and Gully will kill her the first chance he gets. The solution? Take her to America with you, Alfred. Yes he really offers her this.

I’m betting Gully will show back up again when it is least convenient for Alfred. He’ll be deep into his hero game saving London and Gully will show up for one last show down.

Throughout the season I’ve been reminded of Casablanca. Alfred’s job running a neutral club in a city occupied by fascists echoes Bogart and Rick’s Café Américain. Alfred has got the personal office upstairs just like Rick has in his gin joint. Even his affair with a married woman could be considered a reference despite it not being a tragic love story. This episode takes those small similarities and hammers them home.

About halfway through we have a moment at the club where a handful of Raven Union soldiers show up and start singing Rue Britannia. I wondered if they were going to pull a Casablanca and have the rest of the crowd all sing together an opposing song. Which they do, but it doesn’t strike the same emotional chord as Casablanca does. Probably because the song they drown out is already a British patriotic song. It’s not a song that needs to be pushed down by Britains showing their patriotism. Tough when you are in a civil war instead of World War II.

Towards the end of the episode we arrive at an airfield and again I’m reminded of Casablanca. The hanger with the one plane that is the last way to freedom. So when the theme song starts to play and Alfred, his mother, Dave Boy, and Melanie start walking towards the plane I knew Alfred wouldn’t be getting on it. He knows he needs to stay behind and fight for his home. Melanie does get on the plane, which I was glad about. “Here’s looking at you, kid.” I figured they were just going to kill her off so this is a much better end to her story.

Wayne also decides to stay behind to fight the good fight. They end with dropping the line “I think this is the beginning of a beautiful friendship.” Which at least confirmed I wasn’t pulling Casablanca references out of my imagination.

Do yourself a favor and watch Casablanca if you haven’t seen it. Actually, watch it even if you have seen it.

3. Getting the band back together

Lucius and Thomas make their report on Stormcloud to their superiors at the CIA and much to their chagrin the US won’t intervene. They can deny they even know about the weapon and would just like to see the war come to a quick end. Which a massive chemical attack on London would do. Thomas stops Lucius from pushing any further because he knows they won’t change any minds. We are then treated to one of those scenes were the setting changes and they just pick up the conversation like nothing has happened in between.

This last course of inaction by the US is what it takes to spur Thomas into action. He’s going to share his info with Martha and he knows Martha will share it with the League. This might be the moment when Thomas has finally earned Martha’s respect. He’s been self-serving quite a bit with only a hint of the altruism that Martha is looking for. Thomas wants to get Martha and his sister out of England on the same plane as Alfred and fam, but Martha is not having any of that. She knows the stakes and is not abandoning the fight.

With Alfred, Thomas, Martha, and Lucius all staying in England it allows us to get all the heroes together. Alfred notes that Aziz is still a “conniving bastard” which is true, but they are going to do something about Stormcloud. Thomas drops a small nugget here about going to med school, which Martha approves of. Another tiny step towards Crime Alley.

Yes, dear reader, our true hero Bet Sykes has returned after a week off. Last we saw her she had made a promise to Browning to stop hurting people which she breaks right off the bat here. After getting called for help by Harwood’s assistant, Bet and Peggy spring into action to break Harwood out of his house arrest. They make short order of the guards and surprise Harwood with a rescue.

Harwood knows that Salt is behind everything. He knows escaping and going into hiding won’t stop Salt, so he concocts a plan. Harwood announces he’ll surrender to Salt personally tomorrow and tells Peggy and Bet it’s to buy them some time. This plan doesn’t make any sense. He’s already surrendered. He’s under house arrest. He can’t go anywhere or get out. What else is there for him to surrender? It seems like Salt understands this at first calling it “empty theatrics,” but then immediately relents. What does Salt hope to get out of this? We get a hint of what Harwood wants to do, but I do not understand why Salt agrees to it.

Harwood is a bad guy. The Raven Society are bad. But Salt is much much worse. Harwood knows that Salt is only able to hold on to power under Harwood’s name. Salt has no legitimate authority and no loyalty from the army. Harwood knows the only way to stop Salt and Stormcloud is for Harwood to die. Without Harwood the Raven Union will need to pick a new leader and not just go along with Harwood’s deputy Salt.

Harwood sends Bet and Peggy away to get Gaunt with the explanation he’ll make a distraction. Despite Salt’s protestations the soliders shoot and kill Harwood as he charges on Salt. It’s made to feel heroic because Salt is truly despicable, but again Harwood is a villain. He’s a fascist leading a civil war in England. Let’s not forget that.

The good good guys are together, the good bad guys are together, the bad bad guy is on the ropes, it’s time for things to come to a head. How will Salt maintain power? How will Pennyworth and the League stop Stormcloud? Will they join forces with Gaunt and the Sykes? Will Bet get to keep her happy ending? Oh yeah and will Martha tell Thomas about her pregnancy? Maybe we’ll find out next week in “The Hangman’s Noose.” 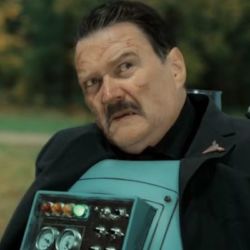 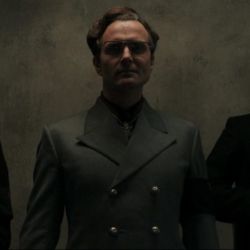 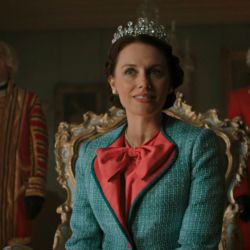