You’ve seen Smallville, you’ve seen Gotham, you’ve seen Krypton, now get ready for Pennyworth — another DC superhero prequel show. Set in 1960s London, Pennyworth gives us the backstory on how the Waynes got their loyal butler and show off some of the skills Alfred later puts to use as the original guy in the chair for a vigilante.

The draw is clear for creators and for DC. Creators can tell a mostly original story in a universe that has a built in fan base. DC gets to exploit their IP without fear of over-saturating their biggest characters. Matt Reeves can make a Batman movie without competing with a Batman on television. The show introduces us to a young Alfred Pennyworth fresh out of military service and getting back into civilian life. Alfred is looking to use his skills to start his own security consulting service when he bumps into a young Thomas Wayne.

1.This show is definitely rated TV-MA

Every chance they get to drop an f-bomb, they do. Toss in a little bit of violence and some nudity – – you’ve got a DC show they couldn’t play on The CW. It occasionally feels gratuitous but never gets into “fuck Batman” territory. The violence also never hits Titans level gore. Certainly never expected to see Alfred as a bouncer in a strip club though.

2. The cast is overall really strong

Pennyworth has lots of fun character actors that seem to enjoy their roles. Jack Bannon does a great young Michael Caine and Paloma Faith really sells her villainous Bet Sykes. Alfred’s parents (played by Dorothy Atkinson and Ian Puleston-Davies) are exactly as you’d imagine them–an older English couple in the 60s who wants their son to follow in the family business of service after his time in the military. The only exception is Ben Aldridge as Thomas Wayne. He felt a little wooden and out of place at times, but that might be because he’s the only Yank. Not sure that multi-billionaire would be a forensic accountant, but it gives the elder Wayne a reason to get into danger.

As a Yank myself there were many moments when I had no idea what people were saying. The various accents and use of 60s English slang gave the show an authentic feel, but there were times that I legitimately didn’t know what they were talking about. During an intense dinner scene with Esmé and Alfred’s parents her father was described as a dean and a vicar which is something I needed to look up after the fact.

On the same night Alfred meets Thomas Wayne he also meets Emma Corrin’s Esmé. A good portion of the episode is dedicated to fleshing out their relationship. We get some dates and a tense meet the parents scene. I liked her chemistry with Bannon, and her character seemed genuinely interesting. That’s why it’s even more disappointing when she ultimately is just used as the damsel in distress to kick start the plot. She’s kidnapped by Bet so the villainous Raven Society can get to Wayne. Even when she gets a chance to fight back it’s mostly ineffectual and ultimately only serves to advance Alfred’s plot. This drives Alfred through the rest of the episode while we are left to wonder if he will sacrifice Wayne to save Esmé. We of course know this won’t be the case.

The hair, the clothes, the sets, the Queen! If you’ve ever wanted your superhero shows with a side of Mad Men and a splash of royalty there is a lot to like here. The production design went to great lengths to make the setting feel authentic. The manor/headquarters of The Raven Society felt like a place Alfred could get comfortable and it’s hidden dungeon area was seriously creepy. The streets of London had a fantastic lived-in quality. The cars all looked great and period correct and, in what I feel like was an Animated Series nod, they put some zeppelins in the sky. I first expected a bit of a Bond vibe based on the advertising, but despite the similar setting it didn’t end up feeling that way. Alfred isn’t quite a sociopathic killer like 007 and mentions several times that he doesn’t like violence. 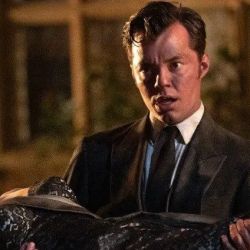 Pennyworth returns one last time for what could be our last glimpse into the beginnings of Batman’s butler. This episode once again picks its name from a singer famous in the 1960s and once again it’s completely irrelevant to the plot.Spoiler warning!1. We’ve forgotten or ignored many things leading up to this pointLet’s recap how […] 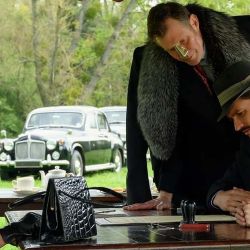 Pennyworth is back with its penultimate episode following our favorite future butler. Where does last week’s Raven Society rally leave London? How is Alfred going to get out of prison after being arrested for murder? Come along dear reader and find out, but beware the spoilers that follow!1. He’s Never Gonna Give Her UpThe police […] 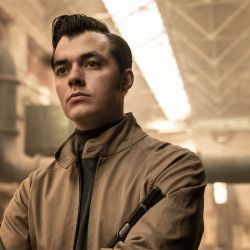 Pennyworth is back with another episode following our favorite future butler on his way to becoming Batman’s manservant. This episode is named after Sandie Shaw, another singer famous in the 60s. That continues to be the only connection with the majority of the titles. With only three episodes left we’ve got a lost of loose […]