Welcome back, leapers! This week, Sam invents a bunch of horror novels and tries to walk, again, in high heels. Let’s go!

The best episodes of Quantum Leap are those that play with convention a bit and require you to think for more than a minute about what the objective is and/or how Sam will struggle to meet it. This episode, for all but the final 5 minutes or so, does that in spades. There’s a deep mystery that keeps deepening, bringing in new elements that seemingly don’t fit, and sending Sam through the motions the entire time. It’s an incredibly engaging episode that made me sit up and pay attention in a way that these episodes rarely do. But then…

2. A goddamned dream, and not even one that makes any sense

So, let me see if I can properly explain what happened here. Early in the episode, Sam is scared by the cheapest Halloween costume known to man, and falls down the stairs. In that moment, he blacks out, and lives the entire episode in a dream. That’s annoying, but here’s the kicker: he wasn’t really dreaming, as he knew that Tully, the man he needed to save, was on a ladder outside of the house, because that happened in the dream. So he basically lived a fake leap that was also a horror novel, likely inspired by the not-Crowley book he was reading before he fell down the stairs.

For a show that often makes sure to give its viewers emotional resonance above all else, this landed impossibly flat. Yuck.

3. I should’ve seen this coming

So in this episode, Sam leaps into a horror writer from Maine. I presumed that they couldn’t/didn’t want to use Stephen King by name, so this was essentially Sam leaping into a King facsimile. I didn’t take note of the kid who hangs around him named, you guessed it, Stevie. Sam unwittingly gives him the ideas for Carrie and Christine, and the show cast him as, essentially, horror obsessed Paul from The Wonder Years.

4. The only girl I’ve ever loved is Samuel in drag

One of the cornerstones of Quantum Leap is that when Sam leaps into a woman, it is usually a memorable episode. This is both because Scott Bakula gets to do his fish out of water thing and Dean Stockwell his “ugh, I want to fondle my friend” routine, but also because it usually means that there’s a deeper issue at play here. This week, Sam leaps into a beauty pageant contestant with two goals: to win third place and to keep a fellow contestant from dropping out.

This episode, in addition to the usual QL commentary on the cruelty of heels and women’s undergarments, digs a little into male/female power dynamics and grooming. One of the nice things about the series is that, even when dealing with ‘issues,’ it rarely devolves into after-school special moralizing, and while it gets close to that line today, it never quite gets there, thankfully. Sam, of course, teaches the photographer creep a lesson, there’s a comment about being mystified by a fighting women, and everyone goes home happy after Sam channels the Killer and does “Great Balls of Fire” while dressed as Carmen Miranda.

The first time I really got into Quantum Leap, it was when I was watching reruns on Syfy in 2000-2004 as a college student. They always used the same opening credits, regardless of the season, and it must’ve been the season 5 credits, as it has moments from all three of the seasons I’ve rewatched so far, and more. I always get a little charge when we see an image from those credits in the episode itself. We got a few from the two-part premiere this season, and we get another one today, with Sam in a white dress and umbrella doing a dance routine as part of the pageant. I sat up like Rick Dalton and pointed like a seal at the screen. I loved it.

The Oh Boy Teaser: We aren’t given a ton of context here, but Sam leaps into a situation fraught with danger. This is a classic episode, and I’m excited to revisit it. 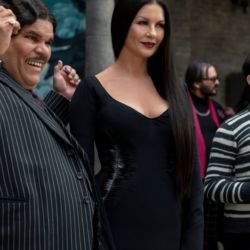 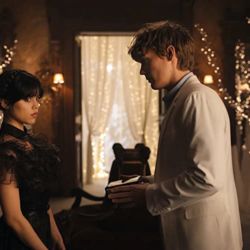 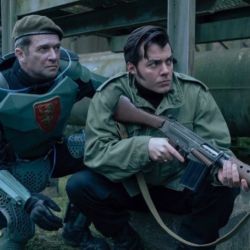