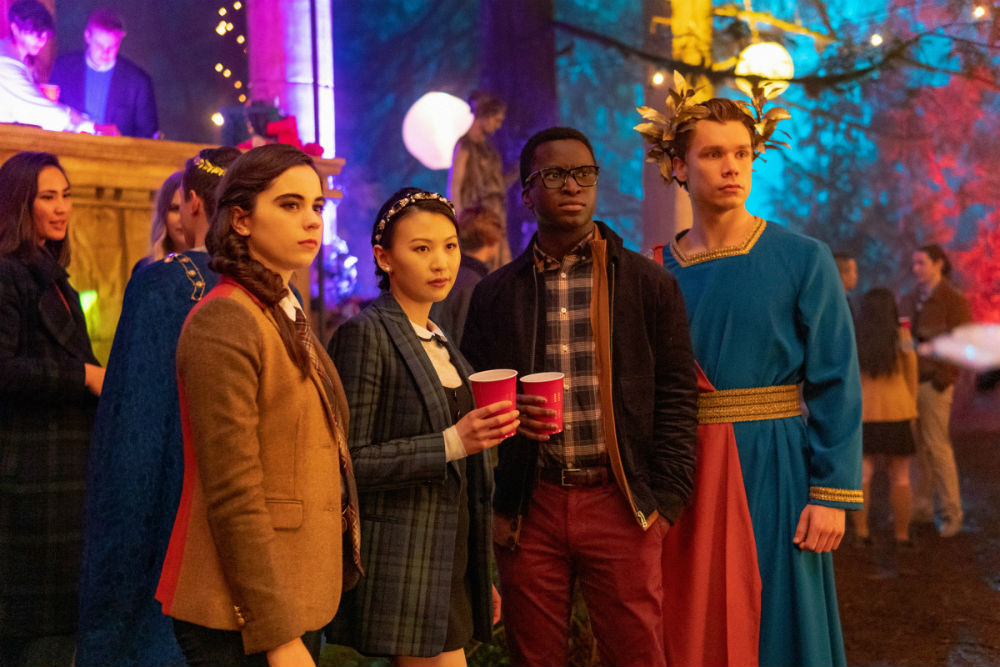 Welcome back all you Riverdale fans! I’ve never been as simultaneously full of theories, vindicated, and utterly pissed at half the characters as I am this week. WOW. I’d never call Riverdale a high caliber show but this week hit all the right buttons. I’m excited for the back half and you all should be too.

1. I Come to Bury Hiram, Not to Praise Him

Veronica’s had a tough go of it as of late. She’s learned that her father has an ALS-esque disease that’s harming his body and his pride and she’s still fighting to be a rum business owner, which, I’m not entirely sure is legal since she’s under 18? For the sake of the show I’ll let it go but, like, seriously, how’s Hiram not just come down on her as a minor selling alcohol?

Anyway, Veronica is conflicted because he’s her dad and yeah, he’s a kingpin piece of shit who trusts his first child who he left in Florida to run his rum operation more than her, which, to be fair, makes sense, even if she is Hiram 2.0, because first born child who’s trusted with a rum business and is Hiram 2.0. Veronica’s hurt about Hermosa being told about the disease and not her is also understandable because, much as she wants to have nothing to do with him, he is family and she cares about him in the same twisted way he cares about her. Though, again, fuck Hiram and everything he stands for. He’s not a good person but he is still a person and I think Riverdale has really nailed that this season in ways previous ones have not.

This manifests itself in Veronica’s reckless abandon, fucking in the music room, Dionysian bacchanals, and keeping a fucking flask of rum at school? V, the hell were you thinking. . .oh, right. You weren’t. It’s over by episode’s end, or right before it at least, because if it weren’t, Jughead’s murder certainly would shock the system. It’s a nice arc but it being over and done so quickly is still annoying. The status quo must be maintained.

2. My Heart is in the Coffin there with Jughead

Watching Jughead get railroaded this week is a bitter pill to swallow. It’s heartbreaking not because it comes out of nowhere, though it did blindside me in its intensity and veracity, but because it shows just how long of a con this seminar group has been playing. DuPont is clearly in on the whole thing, and is probably the instigator for Mr. Chipping’s death, in part because he had a conscience and in part because he wanted to be head of the seminar. My guess is the reason he drove, or helped drive, Mr. Chipping to suicide is that Mr. Chipping was recruiting scholarship students and, because Jug was actually better than the rest of the seminar, he saw that as a challenge to the blue blooded nature of the institution.

I thought DuPont simply turned a blind eye to the kind of shit Brett, Donna, Thomas(?) and. . .damn, they really only bothered to develop two of these characters, didn’t they? Anyway, DuPont was ignoring their antics but it seems now like he’s been a more active participant. And, of course, it was plagiarism that they used to kick him out, the very thing he accused DuPont of doing. The mirroring of his grandfather and him isn’t perfect but it’s pretty close, what with DuPont getting the rights to a Jones piece and then passing it off as his own but “legally.”

It’s still pretty fucked up and seeing Jug buckle at the end was fantastic pay off to it all. It feels like a defeat and I think the show is stronger for it than for having him fight. It adds a different layer to the Ides of March bacchanal and provides Jug with a new reason for his desperation. For months, the rest of the students were always one step ahead of him and Betty. Now? Maybe he’ll finally pull out in front.

3. I Thrice Presented Him a Selling Contract, Which He Did Thrice Refuse: Was this Ambition?

Arch’s life has spiraled out of control. Sure, he’s had numerous attempts on his and his friends lives at the hands of his neighbors, his father was shot, survived, and then shot and killed, and he was sent to prison for a killing he didn’t do, but apparently none of that matters to good ol’ Mr. Honey. He’s a super stickler for the rules in a way Principal Weatherbee never really was, which sucks because he got increasingly sidelined until last season’s The Farm debacle. Mr. Honey finds it dishonest to walk with your friends when you will have to repeat the year, which. . .is fair. He doesn’t have to be a dick to it to this kid who’s had WAY too much life happen to him in such a short span of time, but he does have a point.

Archie’s priorities were on the center and his drive to go to college was only after a spur of the moment decision. I get why Mr. Honey said no. I get his incredulity. I also get that he’s being a huge barrel of monkey scrotums.

But that’s not all for Arch. He’s drowning under his responsibilities and wanted to divest himself from his two businesses but, after considering things, he couldn’t do it. It’s a stubborn thing but he made moves to not be as active. Mr. Keller is the new foreman and he’s rededicating himself to the gym/center. He’s had to grow up quickly. It hasn’t been easy but he’s getting there.

4. You All Did See That in the Ad Space

This isn’t about the episode itself but about midway through, without missing a trick, the show transitioned into an anti-smoking ad featuring Cheryl and I was cracking up. Smoking is bad, don’t do it, but these commercials always crack me up. It’s done in the most Riverdale way too! I love it.

5. But Let Not Therefore My Good Friends Be Grieved

It took a little over half the season but we’ve finally reached the scene before the scene that’s been teased since last season — the “death” of Forsythe Pendelton Jones III. Let’s break this down because I have a lot of ideas. For one, the fact that Betty didn’t know something was up baffles me but I also was under the impression that she had a plan. Turns out I was wrong about that and she fell right into the gang from Hell’s trap. I was, however, pretty close with my prediction from the mid-season finale about how the scene plays out, though I didn’t expect Donna to have found out a new secret phrase but I’m not surprised that they are the ones who set Betty up to take the fall rather.

First: I don’t believe Betty killed Jug. Sure, Donna says it induces a fugue state that makes you want to kill those you’re close with but my guess is that it didn’t actually do anything more than get her to dissociate. They don’t show the scene and instead cut back to her holding the rock, a scene we were privy to a few weeks back. My theory is that Brett or Donna or the like hit Jughead and planted it on Betty. That, or they primed Betty to actually fugue out and left before witnessing anything, and then Jug snapped her out of it and they faked the “death” together. We know Betty’s a pretty good actress when you get right down to it. Are there holes in this theory? Yeah but it’s what I’m going with. The whole thing is a set up and I’ll be damned if they actually have Betty kill Jug.

Second: There are too many unanswered questions for this to be as it seems. Betty clearly has no idea what’s going on, Jug seems to have kept her in the dark though that could be a feint as well, and Charles is seemingly unconnected to all this so there goes the set up/plan to trap Donna & co ideas, at least until we have more information. Jug told Betty to trust him and that he’d explain everything later. Was that a death flag or an indication of a plan to create the perfect murder?

Why did Jughead wear the Rabbit mask? Why did he ditch it later on? There has to have been a reason. Why the switchblade but we’re never shown him using it? Was he gonna stab Brett? That doesn’t seem like him because it’s not a smart move, not because he wouldn’t cut a bitch. Finally, there’s the scene from the end of last season. It’s in the woods, with a big fire, and is marked Spring Break. They’re not there yet, right? Perhaps it is March 15th and I got the date wrong, in which case, there’s still something afoot.

I still think Jug is pretending to be dead to better draw out the Stonewall Preppies. How they fake the body later on and why they agree never to talk about what happened? We’ll see. And all my theorizing may be for naught, if Riverdale has the chutzpah to kill off a main character. We’ll see. There’s still 9-10 more episodes to go.

That about does it for now! What did you all think of the episode? You excited to have finally caught up to the main death? You think it’s gonna take or is the reason we didn’t get a stinger for Riverdale after the episode is because of the big spoils? Let me know in the comments and I’ll see you all in two weeks for “How to Get Away with Murder,” the episode, not the Shonda Rimes show. Until then, stay out of the woods at night. Beware the ghost that lurks behind the tree, that sees your smile, that wants your blood. Beware the four who draw pleasure from pain and whose blood runs blue when the moon wanes. 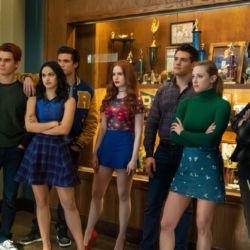 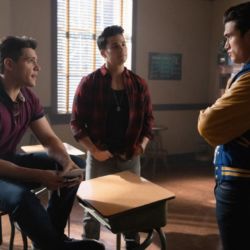 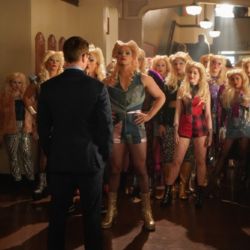 So. . .remember how I slagged off The CW’s schedule for putting this episode off for a month (and then an additional week?) Yeah, turns out it was because someone on set had Covid-19 and production was halted. I hope everyone on set was safe and healthy and the ones who were not have since recovered. The same is true for you, dear readers.