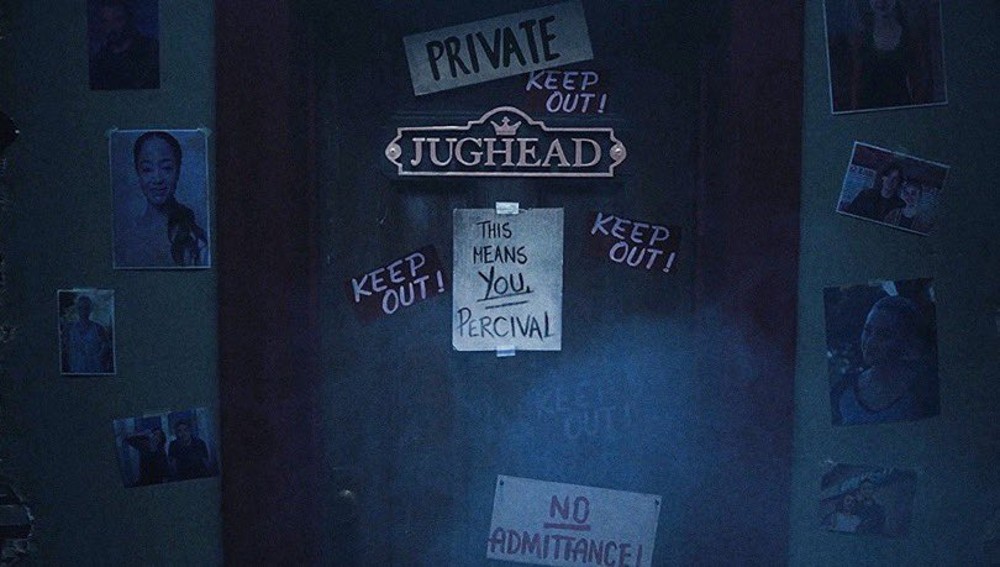 Welcome back all you Riverdale fans! This is a whirlwind of a finale. I don’t even know what to tease or talk about here. There’s so much going on, the costumes are over-the-top and amazing, and-

Wait. Hold up. Why is there one more episode on my schedule? CW. Don’t do this to me. Don’t you dare. What could possibly be more final than a literal battle between heaven and hell?

Oh. I guess that works.

1. I Play POT OF GREED. It Allows Me To Draw Two Plot Points From My Deck.

There were so many tiny little moments in “The Stand” that I could write about, starting from the casual use of the Holy Grail to seal the hellmouth beneath Pop’s – a statement that’s so ludicrous I forgot to mention how it bubbled up what looked like blood and how it’s a 10-second intro segment. I want to focus instead on the ill-fated attempt to negotiate with Percival.

Is it weird that I think this was an important narrative beat to hit? I feel a little weird saying that because of course Percival wasn’t going to negotiate both because why would he and because negotiating in good faith would go against what he represents. They were essentially negotiating against themselves, something that is about as American as apple pie nowaday. But I still like how they go in to try, knowing it likely won’t work but prepared to use the opportunity to try everything. Sadly, and not unsurprisingly, it doesn’t work – both the negotiations and the assassination attmept, which ended in a hilarious flower effect – but they at least get what they went in for, right?

Were they seriously going to bring the bodies to the mine without checking them?! There’s no way that was ever a serious consideration. Even without the ominous Jughead narration or Percival’s mustache twirling comments to Twyla, the gang is smart enough to double check Percival didn’t try to fuck them? I can’t believe I even have to ask these questions.

Seriously. That scene was more infuriating than anything else in the episode. Until Betty was like “I want to see her,” I was nearly screaming at the TV. Writers. You’re better than that. All you needed was someone to express skepticism that it was too easy and then follow that thought to its logical extension rather than it be happenstance.

Also, can I just say, Cheryl’s assertion that the body had to be whole to bring them back is horseshit, top to bottom. If you’re gonna set up a rule, make it CONSISTENT. Jason wasn’t whole, 10 years decomposed as he was. Polly wasn’t, as far as I remember. What about that child you yoinked out of heaven too? What body did he have? What about that three day bullshit before the souls disappear?

I shouldn’t be this mad about these made up powers being extra made up but it’s real annoying when they can’t even stick to a consistent set of rules TWO FUCKING EPISODES IN A ROW.

3. Abuelita’s Got An (Invisible) Gun

Definitely the highlight of the episode is the multi-scene attack on the gang by people close to them. Sure, the Battle of the Babylonium is fun and has some absolutely hilarious moments – Twyla getting ninja stars to the face being a prime example – but it cannot hold a candle to the sheer over-the-top nature of those scenes. And I cannot believe I’m saying this but the phrenetic camerawork and piecemeal chopping of scenes actually made it better. It built tension, heightened the danger, and created anticipation for what was to come.

Toni & Fangs not being attacked surprised me and the same was true for Tabitha & Jughead but my guess is that the show could only fit so many scenes in without it being overwhelming and, in universe, Veronica, Betty, Archie, and Cheryl were the four most vulnerable. I’d say they were all alone but Cheryl was with Heather. Or at least she is until Jason shoots Heather with an arrow in the shoulder. Great aim dude.

While the attack on Archie & Cheryl are pretty standard, if not a little silly, the people who attack Veronica & Betty, as well as the cinematography surrounding it, is downright ludicrous. Glenn, who you’ll remember was dismembered by TBK at… some point this season, was stitched back together somehow and lumbers around until he gets a chainsaw to the head by Betty. The aftermath scene with Polly, and the cutaway to the garage? Classic. But you know what’s even better than that? 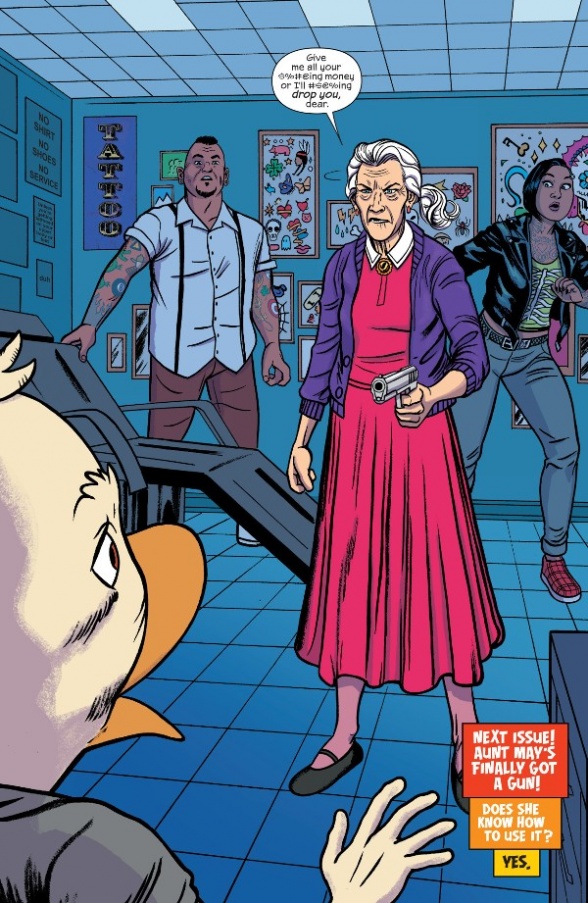 The sheer absurdity of Veronica being attacked by her Abuelita with a shotgun before she’s paralyzed by a neurotoxin cannot be expressed in mere words. At first I thought it was Hermosa but she’s basically been written out of the show. I’m glad it wasn’t because Abueltia was perfect. No notes.

4. You Activated My Trap Door!

They got him! Percival was taken out by his own hubris and also, like, 20 special knives. What an ending for this ghoul. And it came on the heels of his ridiculous chair disappearing act that left him nakid for no reason.

I love the sequence of events it takes to defeat him. For one, the use of Rivervale as the loophole for Tabitha’s “we only win 2 ways and both ways Jug dies” is ingenious. For another, watching our core five get the chance to kick the shit out of Percival is so satisfying. If only real life let us beat up the personification of our ills.

I also really liked Percival’s stupid coat? Him plus the mace was oddly menacing too. And the “ironic” punishments he brought out? Fantastic. 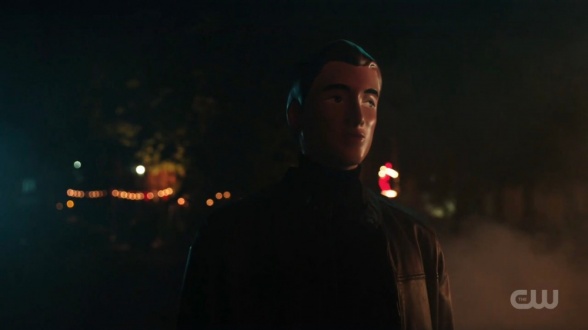 This was my favorite. I can’t believe that damn dummy keeps coming back.

Then, THEN we get the mind games scene. I was expecting a tense battle of minds, an eleventh hour win or loss, or even just an Ingmar Bergman pastiche with dominos. What did we get? Cole Sprouse hamming it up a little, Percival smugly tearing up some comics, and then the greatest pan in the episode, maybe even the season. It was triumphant, bleak, and funny.

But you know what the kicker of it all was? Tabitha’s broken time powers bringing Percival back before he was immortal and getting sucked to hell thanks to the scariest thing Mr. Cypher ever created: exploitative contracts. I laughed so hard when Mr. Cypher busted out the contract with a huge 666 on it. I did wonder why this was happening with 10 minutes to go but I wasn’t going to question it. I was having too much fun.

5. I Place One Episode In Defense Mode

Last season, the finale felt like a big old nothingburger transition between the real end, the emotional denouement, and our sojourn into the extra weird. This season, things are flipped around a bit and we’re going into the actual finale on the heels of this episode, which was a real culmination of everything.

I have to give it to the writers. They not only integrated Rivervale in a fun and plot-important way but they managed to make Percival feel like a real threat rather than a frustrating annoyance the writers couldn’t let lose. I genuinely thought we’d be going into the next episode with Percival having won, or at the very least with the real final battle happening then. I was wrong! And I’m equal parts mad and excited.

Actually, I think I’m more curious than anything else. It looks like we’re getting a quieter, more character focused episode and I have no idea what that will yield. It will let everyone deal with the shit from this season – though I doubt Alice Smith will learn anything – all while knowing there’s a comet on the way to kill them all.

Whoops. Right. Forgot about that. Yeah, turns out Percival did a spell to change the course of the comet as his big temper tantrum moment right before being sucked into hell. We’ll see if that cliffhanger is actually true or if it’s resolved in 2 minutes like most.

Can you tell I’ve become inured to Riverdale’s antics?

That about does it for now! What did you all think of this whopper of an episode? Were you confused by the Baby Anthony age-up too? Were you cheering as Percival got his clock cleaned? Let me know in the comments and I’ll see you in a week for the SEASON FINALE AHHHHHH FINALLY. Until then, stay out of hell Riverdale.

1. Tabitha: “My sense of the divine is tingling.”

Percival: “May the other’s mental and cognitive abilities be shredded like so much cabbage.”

What? Are those my student loans? #riverdale pic.twitter.com/bjF1rTKkKF 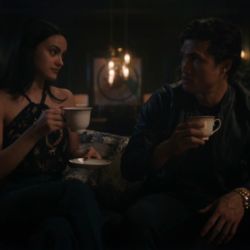 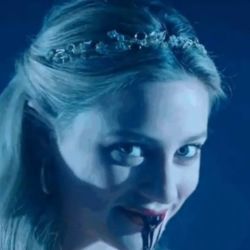 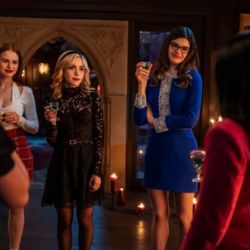 Five Thoughts on Riverdale‘s “The Witches of Riverdale”

Let’s hope that was that last break because I would really like to be done with this season of Riverdale. Don’t get me wrong. I’m loving the utter nonsense we’ve been getting. But this season started in November 2021. I just want to be free.