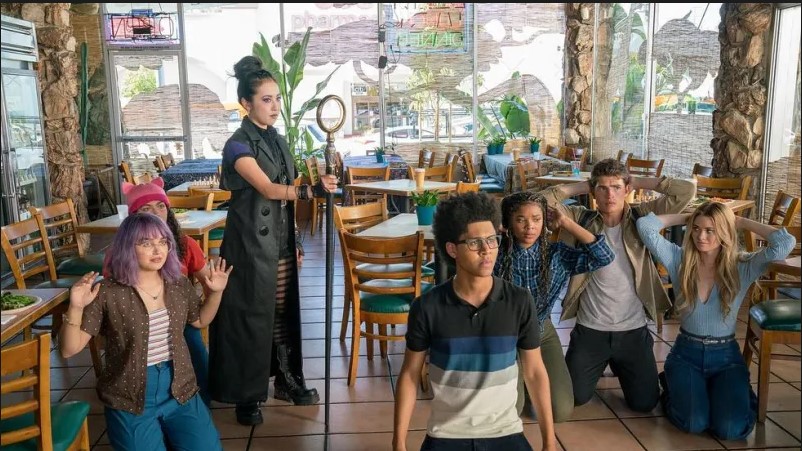 Runaways is back baby! And they’ve finally run away. The first season was arguably the best of any Marvel television and so far, the things the first season did right have been carried over but the stakes are even higher. On the run, they’re wanted by the cops and their parents. “Big Shot” is kind of all over the place but it’s clearly setting up something big for the upcoming finale. Let’s jump into this but be warned, there will be spoilers throughout.

“Big Shot” gives us the absolute best scene in the entirety of the series so far and I had to rewind it and watch it again because it was that good. As we saw at the end of last week, Molly got caught by Flores, PRIDE’s inside man on the police force. She did this to let everyone else get away but none of them were expecting her to be taken away from the hotel by Flores and his people. Molly has some fun and let’s them take her. Flores takes her to a secret location but the rest of the group is following and waiting for their shot. Molly, meanwhile, is in the room with Flores and he starts with the good cop/bad cop routine that goes straight to bad cop once Molly gives him sass. The sass that Molly gives him is fantastic. She calls him PRIDE’s bitch and a worthless crooked cop. She’s not scared by him and starts to even have fun taunting him and the whole thing ends with the rest of the group bursting in and realizing that she didn’t need them as they look at her hold Flores over her head. It’s AMAZING in every single way. Molly has really become a fun character this season as she’s grown more into herself after all she’s been through and this was a great spotlight for her.

2. The Parents Begin To Plot Again

Back at PRIDE headquarters, the parents are together again and Flores has come to see them after his interaction with Molly. He’s furious and done playing games with the group and tells them exactly what the kids are up to. They know that PRIDE, specifically Catherine Wilder, is responsible for what happened to Darius and Destiny and whoever else. Flores knows that all the kids have some kind of powers now and he’s really pissed off about it. He doesn’t know where the kids actually are but he knows that all this information they have is how they plan to take down the parents and he’s not stupid, he knows that could come back on him. Victor ends up with an idea – the kids aren’t scared of their parents anymore and it’s clear they don’t intend on coming home on their own so he suggests they take the kids down. Victor tells everyone that they are some of the smartest people in the world in science and technology and they should use that so his idea is to create weapons that will counter the kids. This is very interesting because this shows that he’s learned absolutely nothing. The issues here are not things that will be solved with force. There is no way that forcing the kids into a fight will get them to come home. It’s kind of cliche in a way because it’s another example of parents not understanding their teenagers, which I think the show should be above, but it’s more interesting to me because clearly Victor hasn’t changed that much. He’s still trying to strong arm his way into his son’s heart and it won’t work.

Livvie is with the runaways now, partially to help them with whatever Alex’s plan is and partially for her own protection. Livvie gets to go to the mansion and gets to spend time with everyone else  but there’s a lot going on here that she’s totally not aware of. She doesn’t know that Alex has this whole plan to get closer to AWOL and use him to their advantage. All of this is very complicated and a big part of why this episode feels so messy. Alex finds out from AWOL that Flores has been gathering evidence on PRIDE and he will give it to Alex if Alex promises to use the information but leave AWOL and the strike team out of it. Alex has to basically let one monster go free to catch another one and he ends up agreeing to it and that pisses off Livvie because she feels like Alex took all that she helped give him and used it against her. She feels that all he wanted to do was get back at his parents and not actually help her or Darius’s family and she’s right. So, no, Livvie doesn’t join them and she shuts Alex out of her life completely. I kind of hated all of this because it feels so needlessly complicated and it’s so apparent that all of this will backfire on the kids immediately.

In the mix of all this drama with Alex and AWOL is the drama between AWOL and Flores. They do what all stereotypical crooked cops in fiction do, they turn on each other immediately when things get tough. AWOL goes and makes his deal with Alex so he can basically take out Flores with ease, which is what he does. He kills Flores and takes his place as PRIDE’s inside man but there’s definitely something else here and I don’t think AWOL plans on stopping with just PRIDE. He also goes back on his deal with Alex and the one he secretly made with Tamar and takes Livvie. This is where the season is ultimately leading I think, with the kids and parents facing off somehow with this strike team.

5. Freaky Friday and a Sick Dinosaur

This episode has two weird bits that don’t totally  match up with everything else going on. The first is Old Lace getting sick. Early on, we see Old Lace messing with some drone that flew by and it sprayed her with something. I thought it was water but it clearly wasn’t and now she’s sick and it’s impacting Gert. Gert is now sick and falling apart physically as Old Lace gets worse. The episode ends with Gert collapsing so now that’s a whole thing for the group to deal with. The second weird part here is whatever was going on with Tina and Stacey after the PRIDE meeting. Tina gets very silly while eating a cake and Stacey gets very mean and secretive with Dale. The two of them start to act very differently and then they get dizzy and come back to Earth. Did they switch bodies? Is Jonah somehow back as a spirit and trying to take over one of the parents? I don’t know but it was weird and very felt out of place in the episode. 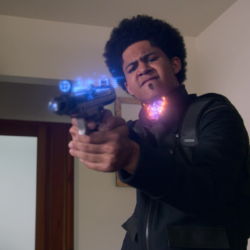 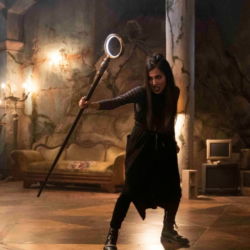 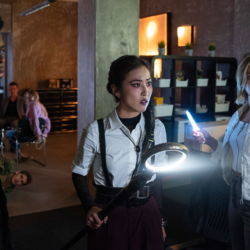