With a dangerous Mugato is found on a planet they are not indigenous to, the crew are tasked with with finding out what’s going on while Tendi is forced to confront her passive nature by forcing those who have yet to do their yearly check up to get it over and done with.

1. Boimler and Rutherford get to carry an episode

Much like Tendi and Mariner in the last episode, Boimler and Rutherford get the rare opportunity to showcase their friend dynamic, which was less explored last season. This is a good direction to take both characters as they share a friendship that highlights aspects of their characters in ways that aren’t always at the forefront. For example, Rutherford seems equally intimidated by Mariner’s experience and natural prowess as a Starfleet Officer. Boimler, on the other hand, seems to act less like a sidekick when he and Rutherford are working together. Breaking up the show’s formula continues to give them opportunities to explore different character dimensions.

The main plot of the episode revolves around Rutherford and Boimler slowly beginning to believe in a rumor that Mariner was part of a Black Ops team in Starfleet and that is why she remains an Ensign. When aspects of the mission seem to confirm this for Rutherford, Boimler soon follows and they begin to run away from their friend as much as the Mugato.

When Mariner tells them that it was just a rumor she made up to keep other ensigns at a distance, she is a little offended that her two real friends believed it. Rutherford openly admits that Mariner is so cool that it made more sense to them that she was on some sort of secret mission.

Despite Tendi’s people-pleasing nature, her determination and hard work override her non-confrontational demeanor as she begins ruthlessly going through the list of crew members as they become less and less petulant until she gets to the end of her list.

It turns out Dr. T’Ana is the very last name on Tendi’s list and hoped that D’vana wouldn’t be able to have made it through due to her passive nature. After an intense but comical chase scene through the Cerritos, Tendi manages to scan her boss and breaking her arm for her trouble.

Despite lacking badass qualities that Mariner has become famous (or infamous) for, Rutherford and Boimler show their own personal skills can help save the day as well. After it is discovered that a group of Ferengi poachers are responsible for the Mugato problem, the poachers slowly capture everyone apart from Rutherford and Boimler. They both decide instead of jumping in to save the day, guns a-blazing, they show the Ferengi poachers that it would be more lucrative long-term for them to start a wildlife sanctuary for the Mugato.

This is cleverly alluded to at the start of the beginning of the episode when they are both playing a dorky diplomacy game and talking about how if nobody wins than everybody wins. Mariner who writes herself off as the negotiating type of cadet manages to beat the two of them at their own game at the end of the episode, despite not fully understanding the rules.

When Shax and his team of redshirts return from their mission, Dr. T’Ana begins aggressively flirting with Shax who is awake but incapaciteted in the sick bay. Despite putting such little focus on the bridge crew, Star Trek: Lower Decks always makes you always feel like there is always something eventful taking place within the typical cast of a Star Trek show on the bridge.

In this we see, Dr. T’Ana’s passing interest in Shax from the end of last season seeming to have progressed further while we were following the antics of the others. 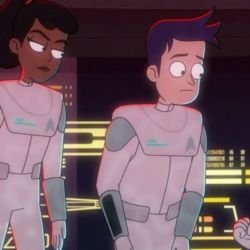 Captain Freeman considers taking a promotion. But first, she must assist her fellow Captain in her First Contact mission. When things go awry, it’s up to The Cerritos crew to avoid total catastrophe.1. The Captain’s LeavingCaptain Carol Freeman, like everyone on The Cerritos is trying to climb up the chain of command within the Federation. […] 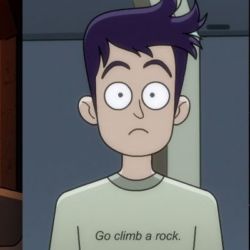 Boimler, in a desperate attempt to find a “bridge buddy,” pretends to be from Hawaii in order to speed time with a bridge member. Meanwhile, we see what it’s like to be a lower deck crewmate on Vulcan and Klingon starships.1. Bridge BuddiesIn preparation for a 12 hour warp, Boimler plans on hanging out with […] 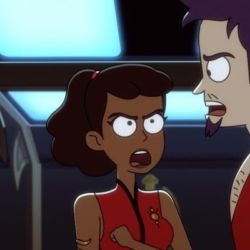 A Starfleet Drill Instructor arrives on The Cerritos to run simulations that have lower deckers and the bridge crew swap duties.1. Ensigns as Bridge CrewThe four Ensigns, particularly Mariner, seem eager to show up their superior officers and pass the exam with flying colors. But Tendi and Rutherford soon realize the difficulty they would face […]