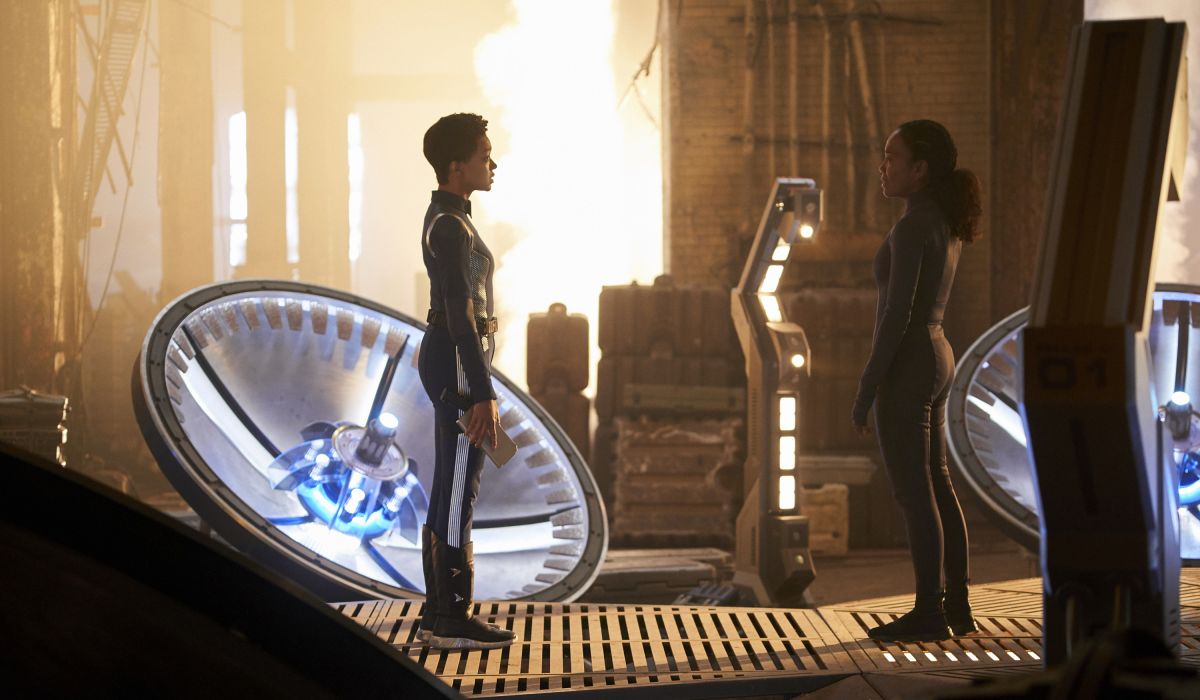 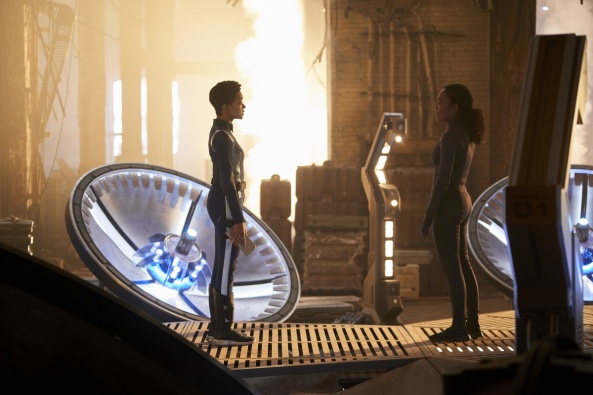 I don’t mind this oft used storytelling trope as long as it provides background information we care about. In this episode we flashback to Michael Burnham’s childhood; a childhood on a Vulcan colony, specifically, the Doctari Alpha Research Outpost. This opening scene gives us a glimpse into a family life 10-year-old Michael had with her scientist parents, as well as a brief encounter with the war-like Klingons that led Michael to believe her parents had died. But, as we see, her mother survived, by using the time-jumping suit she designed. The Red Angel suit. After this flashback, we’re back with Burnham, in the present day, on Discovery; she’s convinced she was hallucinating when she saw her mother, as Michael was herself close to death, but Georgiou, her mother figure for years, tells her otherwise — her mother is alive.

Time is a flat circle. Whether you attribute this concept to Rust Cohle or Nietzsche, Dr. Burnham, Michael’s mother, addresses the idea of time and its mutability. George Orwell insists time is changeable in his novel 1984, and this episode only supports that idea. The Party of 1984 may have been changing the past through memory and written history, and in turn changing the future, but in the world of Star Trek, one person is changing the past by physically traveling through time and influencing the past herself. That one person, Dr. Burnham, states that time depends on the observer, that time is fluid, that the future can be changed. Dr. B has spent her time trying to save Michael and save humanity from the artificial intelligence named Control. Michael views her mother’s mission logs and sees the future through her eyes; all of the time she has spent alone, attempting to thwart Control’s destruction of the human race, over and over and over again. It’s a difficult existence, one that has forced Dr. B to deny her love for her child, a denial that is for the greater good of humanity. An angel willing to sacrifice possible personal joy in order to, well, save the universe. Michael’s mother belongs to the future now, and the future wants her back, so her time in the present is short lived.

This episode was heavy on plot, and a convoluted plot at that. Something felt a bit sloppy in terms of resolving the mystery of the Red Angel and her purpose within the universe. Maybe this is the only way the story could play out; an artificial intelligence personified as Control will have to eventually assume a human form in order to make a modern audience care; a disembodied voice like that of HAL 9000 in 2001: A Space Odyssey doesn’t quite cut it for those born after the year 2001. Modern audiences have come to expect more. I am not one of those people. Something is lost when Control takes over Leland; he’s not creepy, he’s just angry. This being said, Leland himself is humanized when he tries to fight off Control; he may be a man of questionable moral character, but he’s still human; we see him struggle with his morality and humanity when he confesses his role in Michael’s parents’ death, but Control is just blank, emotionless AI that cannot be emotionally reasoned with. It leads to a lack of depth within a character, even if it is just AI. HAL was creepy with his emotionlessness, as only disembodied voices can be, but Control struggles to connect with a human audience in any meaningful way.

I’ve probably mentioned prior to this that the TV shows and movies, specifically the science fiction TV shows and movies, that I enjoy are not super concerned with exploring mother/daughter relationships. We frequently see father/son dynamics as in Spock and Sarek, Kirk and David Marcus, Tom Paris and Owen Paris, and perhaps a father/daughter dynamic in Captain Janeway and Vice Admiral Janeway. But Discovery has spent a good deal of time exploring the mothers of its crew members; for example, Spock and Amanda, and in this episode, Michael Burnham and her mother Dr. Burnham. Her mother has a career and obviously looked for fulfillment professionally, as a scientist, as well as personally, with her husband and daughter; she’s a fairly complex character despite the fact we just met her recently. Her daugher followed in her footsteps and joined Starfleet to explore the galaxy in a way that is similar to her mother’s scientific exploration. Sadly, I have to say the interplay between Michael Burnham and her mother seemed forced in this episode; the acting seemed off to me and didn’t evoke an emotional reaction, but this doesn’t diminish the exploration of the mother/daughter relationship we see on screen in this episode.

I’m cheating and jamming all three of these characters into one thought. I’m going to try my best to link them together somehow. Here we go. Tyler is currently seen as a man of principle and honor; I mean, he was a Klingon, or still is a Klingon deep down inside, so this only makes sense. He doesn’t follow orders blindly and he questions his Section 31 superiors outwardly as well as inwardly. Leland, aka Control, wants Tyler to download the sphere data from Discovery’s memory banks. Dr. Burnham lets us know that if this does happen, all life in the galaxy will be wiped out. The stakes are high. Despite Leland/Control’s best AI attempt at manipulation, Tyler refuses. And so, Control has to convince Georgiou, who is much more sophisticated at deception and manipulation than Tyler, to download the data. She’s a Terran and she’s spent most of her life wielding deception and control in order to hold onto power. At first, Georgiou agrees to download the information in order to prevent the villain, Dr. B according to Control, from escaping with the data from the sphere. But, after Dr. B and Georgiou speak, Georgiou picks up on a phrase she utters that is also used by Control. She’s no dummy. She stops the download, takes Tyler into her confidence — I’m here for this duo — and fights Control in some hand to hand combat. Georgiou is the only one that can measure up to his skills, but even she can’t defeat the speed of an AI enhanced human. Back to the convoluted plot, Control escapes with about half of the downloaded data, despite the fact that Discovery photon torpedoed the hell out of the base. Oh, also, Control stabs Tyler, but he manages to get a message to Discovery revealing the truth about Leland’s new identity. Leland has been consumed with capturing Spock. Now, Control has no use for Spock as Dr. B has been discovered and he has made off with half the data necessary to complete his mission of total annihilation. The episode ends with Spock and Michael playing a game of chess. A game that uses the skills both will need to defeat Control. 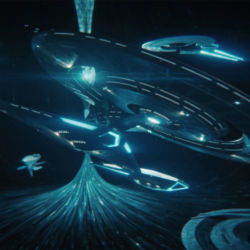 Five Thoughts on Star Trek: Discovery‘s “That Hope is You, Part 2”

Discovery season three concluded with Burnham and the crew continuing their fight to retake the ship from the Emerald Chain, Saru reaching through to Su’Kal, and a new captain.“That Hope is You, Part 2”Written by Michelle ParadiseDirected by Olatunde Osunsanmi1. Battle FatigueWhile Gene Roddenberry (who gets quoted at the end of this episode) described Star […] 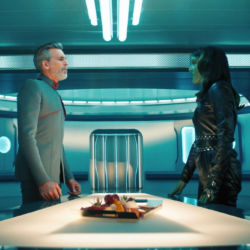 Five Thoughts on Star Trek: Discovery‘s “There Is A Tide…”

On the penultimate episode of Star Trek: Discovery season 3, Osyraa used the ship to enter Federation HQ, and began negotiating a truce with Admiral Vance. Meanwhile, Burnham and Booker boarded Discovery to rescue the crew and retake control.“There Is A Tide…”Written by Kenneth LinDirected by Jonathan Frakes1. Is that a Khan Reference?Remember Zareh, the […] 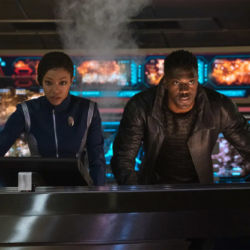 Hope you had a lovely Christmas Trekkies! So on this week’s antepenultimate episode of Discovery season 3, the crew detected a life sign in the nebula where the Burn began, and set out to rescue them. As Saru, Burnham and Culber went down to a dilithium planet inside the radioactive storm, Tilly took command of […]