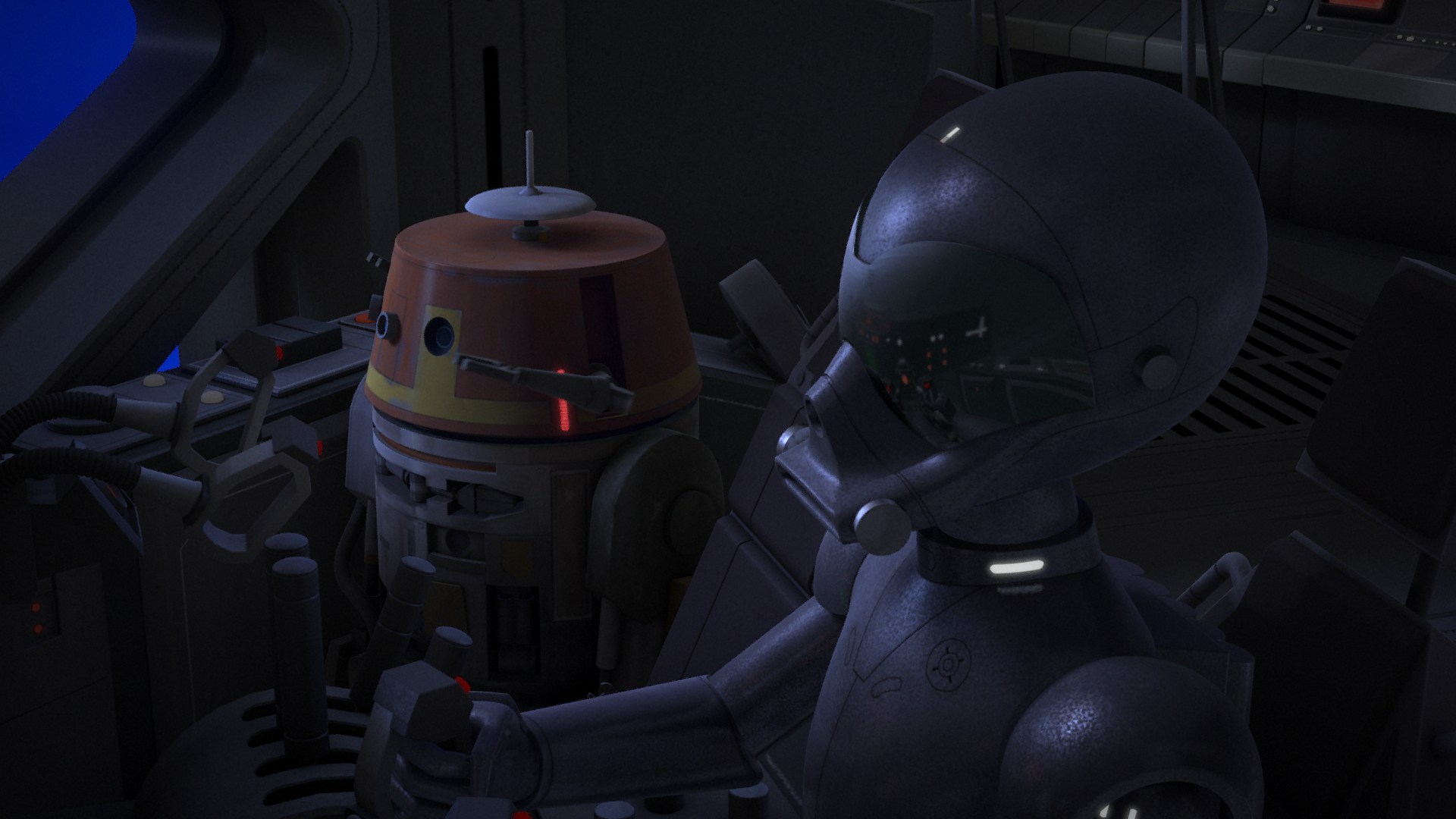 Well, that certainly was an episode. Y’know, after such a strong episode last time we checked in on Star Wars: Rebels with the focus on the Jedi characters on the show, I was worried when I found out the next episode would entirely be about Chopped. Now, while this isn’t quite as bad as I’d feared, it’s still one of those episodes that’s entirely about a side character I don’t really care about.

Still, let’s check out our Five Thoughts on the Star Wars: Rebels episode, “The Forgotten Droid”.

1. It’s Home Alone With A Droid

Like I said, I’m not Chopper’s biggest fan. I’ve always kind of felt like the character exists to bring that kind of kid-friendly slapstick to the show that Disney wants while being essentially the group’s R2-D2. That being said, there have been times where I’ve enjoyed his part in an episode, but those usually come in the context of a larger story.

Here, the entire episode is about how Chopper’s kind of a selfish asshole. I mean, the whole episode is about how he abandons his post in order to steal a support strut after being explicitly ordered not to. And because of that, he gets stranded and has to stow away on an Imperial cargo ship.

Sure, there’s a whole thing that goes into his backstory in the Clone Wars and his new “friend” (more on that in a sec), but I can’t tell if this episode was meant to make me sympathise with Chopper or think of him as more of an asshole because right now I’m kind of leaning towards the latter.

2. The Search For The Rebel Base

At least this episode wasn’t all about Chopper as there’s a sideplot about finally finding a suitable Rebel base. This has pretty much been the driving motivator for the majority of this season, but it’s always been weird to me that it’s mostly been mentioned as a side story in most episodes, like this one.

Like, the Rebels finally actually get a base in this episode, but it doesn’t feel like the accomplishment it should because the episode immediately switches focus back to Chopper. I was honestly hoping that the base would be Yavin IV or something important like that, but no they just show up there to show they do now have a base and that’s it. I was pretty disappointed in that.

That’s kind of all I got in the way of really complimenting this episode if I’m being honest. I really, really liked the design of the Imperial cargo ship and how it feel like it had Star Destroyer inspiration in the sort of pyramid shape while feeling like a Nostromo-style hauling ship.

Yeah, that’s kind of all I got here. Ship was cooler than Chopper this episode.

4. Being An Imperial Truck Driver

Actually, the character I was most interested in this episode was the captain of the freighter. The kind of schlubby, bored guy with a comb-over who probably joined the Empire on the prospect of become an important general (or even just wanted a steady job) and ended up being tasked hauling cargo from one end of the galaxy to the other with his only company being an inventory droid and some stormtroopers?

I would have rather had an episode about him.

Okay, so this was clearly the true goal of the episode. Chopper has been an obvious stand-in for R2-D2 throughout the series’ run so far as part of the fact that most of the Ghost crew are just the original trilogy characters with different names. Kanan is just a weird amalgamation of Obi-Wan and Han Solo, Hera is Leia, Ezra is Luke, Zeb is Chewie, Chopper is R2 and Sabine is… well, Sabine’s probably the most unique, but the rest still stands.

What I’m trying to say is I feel like this is a return to the feeling of Season One of Dave Filoni trying to make his own version of the Original Trilogy. While a lot of Season Two’s episode have pushed the characters away from those moulds and into something more unique, introducing AP-5 as the show’s version of C-3PO felt really regressive to me and I was really disappointed in it.