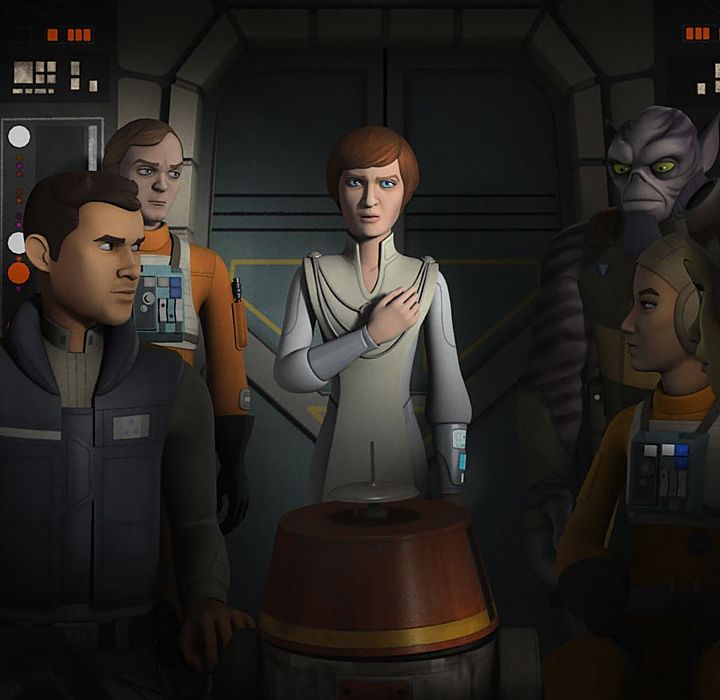 Things are finally starting to pick up for Star Wars: Rebels as the Season Three finale is only a handful of episodes away. As it begins to tie in to the events of Rogue One, this episode sees the Ghost crew escorting Senator-In-Exile Mon Mothma on an important mission that could see the birth of the Rebel Alliance.

Read on below for our Five Thoughts on Star Wars: Rebels‘ “Secret Cargo”. Spoilers, obviously.

This episode, while focused on one mission and maybe wasn’t the grandest of episodes, was actually one of the most historic moments for the show. While we have yet to see Mon Mothma’s formal Declaration Of Rebellion (which, I feel, is something that happened after the Battle of Scarif and the dissolution of the Imperial Senate), this is the point where Mothma officially joined the Rebellion and stood against the tyranny of the Empire.

I find it interesting, then, that this moment was couched in the tail end of this season. Sure, it was given it’s moment at the end of the episode, but I feel like Mothma herself kind of just showed up out of nowhere. I have to wonder if the people who aren’t familiar with canon understand the importance of this moment? I did like this episode a lot, but it really put into perspective that I wish this had been the moment the season as a whole had been building to, not something they just dropped in out of nowhere.

We’ve seen the Ghost crew go from a single cell to part of a larger squadron to part of the fully fledged Rebellion. Now they’re on the cusp of joining what will become the Alliance to Restore the Republic. This is the moment I’ve been waiting for. I can only hope that bringing Dantooine into the mix is a sign that Rebels is about to begin syncing up with Rogue One and the beginning of the Galactic Civil War.

I’ve ragged on the TIE Defender in the past, but mostly because, to me, it was the beginning of a very slippery slope of trying to recreate the elegance of the design of the TIE Fighters and failing completely. The Defender isn’t the worst offender in this, but it’s still one that looks pretty silly to me if I’m being honest.

That doesn’t matter, however, because this episode went a long way to pushing the TIE Defender as a serious threat to even a larger craft like the Ghost. It’s an interesting twist on Imperial ideology in starfighter tactics. Generally, Imperial TIEs are seen as a threat only in larger numbers due to their production line nature stripping away many of the multi-use functions you’d see in Rebel starfighters. It’s why an X-Wing will handily win over a single TIE, but will struggle against a pack of them.

Having the Defender be a TIE Fighter on the same level as a Rebel starfighter is a serious threat and we saw the lengths the Ghost had to go to, basically disabling itself in the process, of getting rid of it. These are going to be scary to deal with.

In this episode, we meet Gold Squadron of the battles of Scarif and Yavin IV fame. This already would have been a neat nod to how close we are to the beginning of the Original Trilogy that we’re starting to see figures like Jon Vander and Gold Squadron show up, but I really appreciated that we’re seeing a more diverse Rebellion in Rebels.

One of the things that always brings Star Wars down is it’s lack of representation in its actors. I will still joke about the fact that Lando Calrissian is the only black man in the galaxy during the Galactic Civil War. Here, though, the Rebel pilots of Gold Squadron felt more diverse, representative of the kind of multi-cultural, rag tag Rebel Alliance we saw in Rogue One. I like that, I hope this show keeps it up. I would like to see a less human-centric Rebellion, though. I need more aliens in this.

5. Closing In On A New Nope

I think this episode, more than anything, was meant to highlight just how much progress the show has made in its timeline. Rebels began five years prior to the Battle of Yavin and now we’re within a year or two of it. Events are starting to coalesce in such a way that we are very close to seeing the beginning of the Galactic Civil War and the formation of the Rebel Alliance and, with that, the events of Rogue One, A New Hope and beyond.

My question is this: will this show keep going beyond those events? It’s been pretty much confirmed that we’ll see the Ghost crew’s perspectives of the Battle of Scarif in either the next season or Season Five and I have to wonder if that will be the end point of the show or whether we’ll see the show evolve beyond that and follow their exploits during the rest of the Galactic Civil War. I don’t think we’ll get a solid answer either way any time soon, but it’s something to think about.