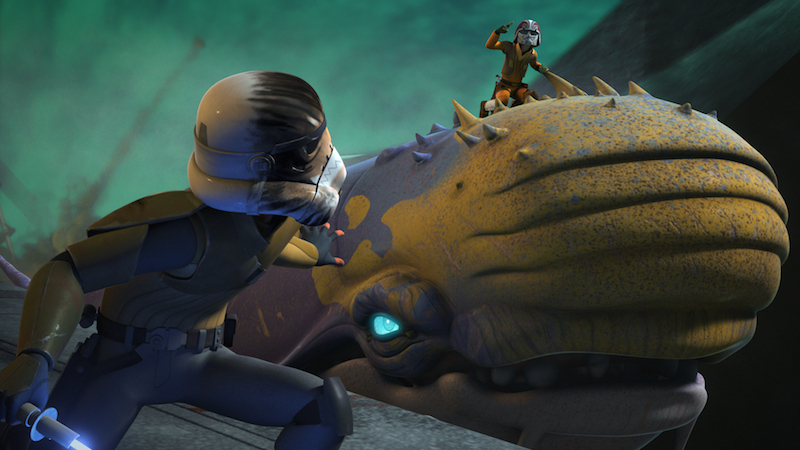 After what turned out to be an incredibly interesting episode last week that really forged the characterisation of Zeb into a new direction things got… a little weird this week. This certainly wasn’t my favourite episode of Star Wars: Rebels, but there were enough good moments to talk about.

Or, at least, there were enough good moments to have Five Thoughts about! Find out what they are down below, but what out for that spoiler warning. Just in case.

1. I’ve Got A Good Feeling About This

So this episode is about Ezra. We’ll get into the fact that I feel like there wasn’t much going on outside of Ezra’s storyline later, but for now let’s focus on what this episode explores about Ezra. We’ve known for a while that Ezra is particularly empathetic to nature and animals through his connection to the Force and this episode… kind of just reiterates that?

I have to wonder if Ezra’s connection to the Pergil is just foreshadowing for a storyline to come, but as it stands it feels like it existed to just reiterate the fact of “Hey, did you know Ezra is empathetic? Because he’s seriously empathetic, you guys!”

Hopefully this builds to something interesting because right now it’s one of the more disappointingly empty moments of the season so far, especially in the wake of how well Zeb was developed last episode.

My initial instinct was to snark the hell out of this, but, honestly, Star Wars has a history of creatures being able to survive in space as far back as Empire Strikes Back‘s asteroid slug. This isn’t the most out there concept Star Wars ever had, weirdly enough.

But space whales that can naturally enter hyperspace? That’s… okay. My suspension of disbelief is straining a bit here. And, much like my point with Ezra’s development, I sure hope this leads to something worthwhile as the last second revelation that the Pergil can naturally enter hyperspace feels… kind of pointless right now? I’m assuming this plot point is going to return, but as of it right now this entire episode feels like set up to something down the road at the expense of the story it’s telling in the moment.

Look, I get it. Hera doesn’t trust the Pergil because they’ve cause the deaths of some of her friends, but where did all of Hera’s level headedness go? She spends this entire episode weirdly trigger happy over a bunch of wild animals who wouldn’t even be bothering her if she wasn’t flying against them.

If the Pergil were out to destroy the Ghost at first, sure, I’d maybe understand why the show kept bringing up her distrust of them, but they were shown to be peaceful pretty much right away and that they were only running into the ship because it was flying right at them.

This felt like the most forced conflict the episode could have possibly had where someone had to be convinced that the giant, gentle space whales are actually ravenous ship-destroying beasts because… I guess something had to be accomplished? Ugh, this episode.

Y’know, at first I was really hoping to enjoy this episode. The running-low-on-fuel episode is something I loved in Firefly‘s ‘Out Of Gas’, but while that used the premise to explore the backgrounds of the characters and their history with the ship and how they all came together, this… didn’t do anything with the premise.

They were literally just complaining about being cold at the start of the episode and then forgot all about it.

This was an episode full of stuff that had potential to make an interesting episode – exploring Ezra’s Force Empathy, exploring new wildlife in the galaxy, the conflict with the Mining Guild over resources the Rebellion needs – but the episode never focused on element enough to make it more than just window dressing.

That was my first thought upon finishing this episode. After how fantastic the season has been so far, I was thoroughly disappointed in this episode. I’ll admit that I could look back on this episode after the end of the season and look on it fondly after seeing how someone these elements develop, but right now I feel like the episode was empty foreshadowing that didn’t hold a solid story in and of itself.

Which sucks because, like I said, there’s a lot here that could have made an enjoyable episode if it hadn’t been buried under the need to reinforce Ezra’s abilities to the viewers. I’m hoping that this is just a single stumble on the way to the finale, but yikes… after last week, this was a huge disappointment.