Well, season one of Stargirl is in the books. I wrote about the macro of the season on Monday, so this review will be purely focused on what happened in the final 40 minutes of this season. Let’s dig in.

No hour of TV, especially not CW-level TV, is ever truly perfect, and so I can’t laud total praise on “Stars and S.T.R.I.P.E. Part 2,” but it does a pretty great job of closing out the season one story. The cold open was a, pardon the pun, chilling vision of what happened when Project New America’s machine kicked on, with a young girl fearing for her father’s catatonic state. The two-part finale does a really good job of establishing why Project New America has good ideology but terrifying implementation.

It also shows how adaptable and well trained the JSA are. While I do have a little bit of problem with this junior JSA being able to take down the Injustice Society when their parents/namesakes failed, the show lays out a pretty clear plan for the kids to be successful. It was also nice to see Mike get in on the action by shattering Icicle with a pickup truck that I’m reasonably certain he couldn’t reach the pedals of.

The finale also continued the show’s penchant for teasing other DC properties, this time using the movie theater’s marquee and posters as easter eggs, with advertisements for films like The Haunted Tank, Prez, The Unknown Soldier, and El Robot.

This episode saw every member of the JSA, aside from Pat and Courtney, have some sort of major change to their character. We see Rick have the opportunity to kill Grundy, but see whatever humanity is left in him, and spare his life. Justin realizes his mission and, although he doesn’t really achieve it, he’s refocused now. Beth no longer has Chuck to rely on, at least for now. And Yolanda, just minutes after asking Rick to not kill Grundy kills Brainwave when he poses as his dead son.

I’m especially interested in Yolanda’s transformation. Of all the characters on the show, she has been the most black and white about right and wrong. Once Henry screwed her over, he was dead to her, no matter what else was going on with him. Despite her being so steadfast in the preservation of life, she now has to deal with the fact that she killed. Her killing saved the lives of millions of people, but she has to grapple with the fact that, like Project New America was going to kill in order to make things better, she had to do the same. It’s a surprisingly nuanced situation for Yolanda to find herself in.

We know how much of this series was inspired by/stemmed from the James Robinson “Starman” run, but there were two things in this episode that really pushed those buttons. The first was the portrayal of Solomon Grundy. While my notes wrote down “My Chemical Grundy” for his hairstyle, the idea of Grundy not just being a ruthless zombie is something from Robinson’s run. In his run, whenever Grundy dies, he comes back differently, and so one of his resurrections saw a gentler, child-like Grundy. We didn’t exactly get that here, but the idea that Grundy could be more than just a hulking monster is certainly reminiscent of that run.

But more than that, the introduction of The Shade in the episode’s last few minutes is really bringing the “Starman” connections. The Shade was a Golden Age villain, but became much more of a grey, if not at times heroic, character under Robinson’s pen. What role he’ll have in season two remains to be seen, but the Shade is a fantastic character, and should make a good addition to this cast.

The growing relationship between Pat and Courtney has been the high point of the season consistently, and this episode had multiple moments designed to specifically tug on the heartstrings. And yes, it was a bit manipulative in parts, but when it works this well, I really don’t care. This is one area where I feel like Stargirl works better than its source material, because while Courtney and Pat’s relationship grew in “Stars and S.T.R.I.P.E.,” it never felt as organic or deep as their relationship here.

When Courtney says “It’s me, your daughter” to Pat when he’s in the thrall of Project New America, it got a little dusty in my living room.

5. Building for the future

The last ten minutes of the episode are all about setting up season two, whether it was Shiv getting the Eclipso diamond, or Rick vowing to help Beth get Chuck back, or Justin going on a search for the other Seven Soldiers. But the biggest tease for next season is the revelation that Sylvester Pemberton, apparently, isn’t dead. The show did a nice reverse job on the reveal of Courtney’s dad here, and when it panned up to be Joel McHale, it was a fun little shock.

That said, mark my words: this is a shapeshifter or some sort of trick. He’ll try to get the Cosmic Staff back from Courtney, and it’ll turn out to not be him. Or maybe this is where the show introduces Ted Knight, to build Court a new staff. But I don’t think that’s Sylvester. I won’t exactly stake my reputation on it, but I’m pretty certain.

See ya next season, whenever that may be. 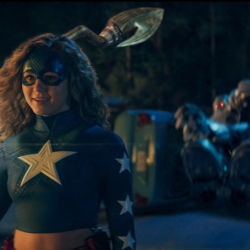 The Surprising Success of Stargirl

In a lot of ways, Stargirl should have been anathema to my tastes. James Robinson’s “Starman” is my favorite comic series of all time, and I have a deep, deep love for the way that Robinson, David Goyer, Tom Peyer, and Geoff Johns took the inactive Justice Society of America and brought them back to […] 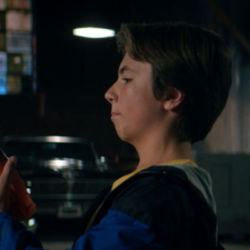 With just one episode left, Stargirl continues to ratchet up the tension and set the stage for the end of the first season. And, with production likely getting underway later than expected, it may be some time before we get new adventures with Courtney and co. 1. Mike knows the drillThis episode has a few […] 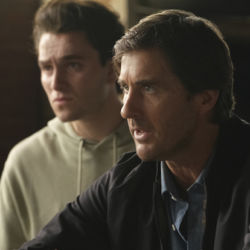 As Stargirl moves into its season one endgame, “Shining Knight” takes a step back and makes sure that all of the pieces are set up exactly where they need to be for the two part finale. It also pauses the superheroics almost entirely to shore up the family dynamics, which it does to great effect. […]