This episode of Stargirl may be the least action-oriented in any in the show’s two seasons. However, the last 5 minutes have, perhaps, the most consequential action of the entire series as well. This is a strange episode, balanced on the precipice of teasing the future and clarifying the past.

Just last week, I mentioned how much of an asshole Starman has been in the all the flashbacks thus far. Well, this episode spends its first ten or so minutes letting you know that he’s not actually so bad after all. Sure, he’s still somewhat condescending to Pat, but he reveals a bunch about himself, his relationship with Pat, and his feelings about the JSA. Of most import to us is his love for Pat, which basically was never acknowledged until this week, but he truly considers Pat family. Beyond that, he says that his relationship with Pat is more important to him than the JSA. That’s a bold statement for a few reasons, but a very welcome one in the context of this series.

There’s a scene where Pat and Courtney are driving in the car, and they’re surfing around the radio stations, stopping when Brenda Lee’s “I’m Sorry” plays, causing a confession. This is a combination of two gags from Tommy Boy, one where “I”m Sorry” plays after Tommy is hit in the face with a 2×4 by Richard, and also when they’re changing radio stations and settle on “Superstar” by the Carpenters. It is so clearly a Tommy Boy homage that I’m sort of impressed, if a little pissed at just how lazy it is.

This episode continues to blur the intentions of the Shade consistently. If I had not read so many comics with the Shade in it, I’d be fully convinced of his villain status after the events of this episode, but I still think that Shade is acting on his own behalf, but is still looking out for the new JSA. We learn here that he saved Doctor Mid-Nite by shielding him in his shadows. We’ll come back to that in a minute, but his actions in this episode can be condensed down to two parallel lines of thought: he is looking out for himself and he has no time to walk these simpletons through his every move.

Yes, he brings Eclipso back, but he also regains his powers. Yes, he tricks Barbara and Beth, but he does so because he likely couldn’t fully explain everything in an efficient way. And so, he does what he needs to in order to move things along.

Also, again, there is something between Shade and Barbara that we don’t know yet.

Ok, let’s name ’em: Obisidian, Mr. Bones, the Gentleman Ghost, Jakeem Thunder. This continues the super strong Infinity Inc. connections, with both Mr. Bones and Obsidian having II ties, as was Jenny, Beth, Yolanda, and Rick. But this episode also teases the original Doctor Mid-Nite’s potential return from the Shadowlands, sees Jenny really embrace her power, and the first sign of Jakeem’s power wielding the Thunderbolt.

This season was always going to be a weird one, filmed in the midst of COVID-19, and this episode really highlights the transitional aspects of the season, somewhat wrapping up last season’s stories, somewhat setting up season 3.

OK, so let’s lay out the end of the episode. Because Shade lied, Jenny puts back together the Black Diamond and summons Eclipso. Eclipso then sends Courtney into the Shadowlands, leaving Pat and Jenny looking on in horror. Now, we know that Doctor Mid-Nite is there. We also saw Cindy “Shiv” Berman sucked into the shadows. We also know that now the Shade has his connection back to the shadows, and so while it may seem like Courtney is screwed, she actually will have a fair amount of potential help there.

That said, this is an excellent cliffhanger, and adds a sense of urgency to what was, otherwise, a relatively placid episode. 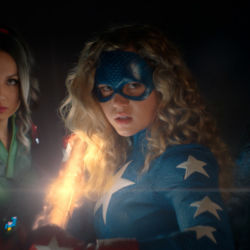 The finale to season 2 of Stargirl is an odd duck, as it both feels incredibly rushed and also like it is dragging things out to bizarre lengths. Each moment in this episode that felt surprising or earned was still telegraphed, and all the stuff that felt expected just kept going and going. That’s not […] 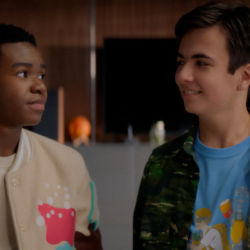 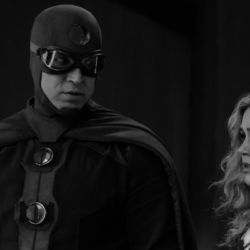