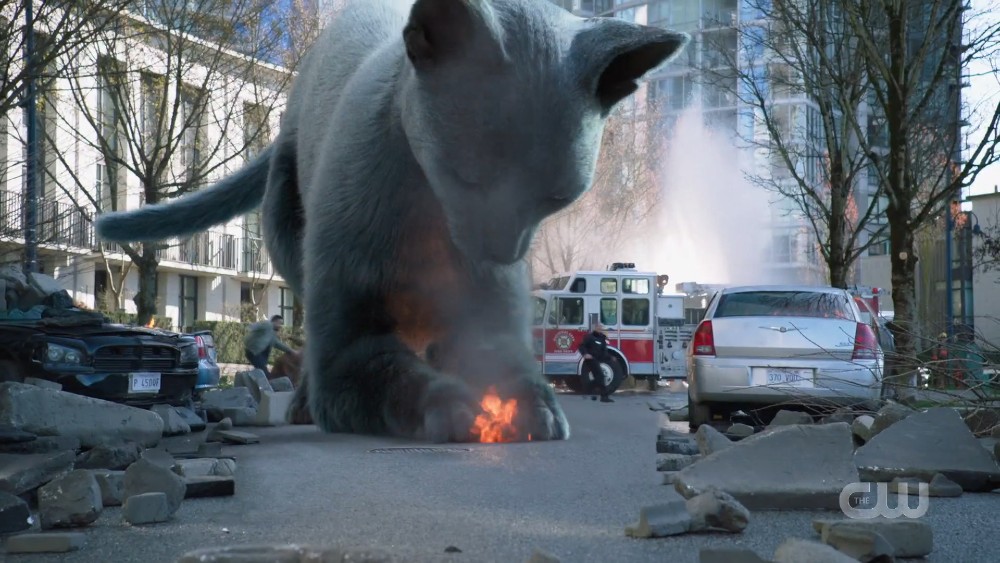 Welcome back all you Supergirl fans! Every time, without fail, the week I miss ends up containing my favorite moments of the season up to that point. Eat your greens everyone!

Most of the time the action in Supergirl leaves me cold. This is truly across the board for the CWs shows, though, so I try not to comment on it often. The same happened in “Mxy in the Middle” but I got such a kick out of their Beebo style fight against a giant cat that I can’t be mad. It was just way too funny and the best part is that no one, not even the snarkiest commentators of previous seasons, made a peep about how funny it was. Perhaps tensions were just too high but a little debrief on the absurdity of their lives without the ironic eyeroll would have been nice.

Also, I think the cat was real, in that they filmed it in front of a green screen. Then, much like with the boring CGI monsters they usually fight, they added it in through the magic of CGI & compositing at a large size. I really hope this is what they did because then I can get an even bigger laugh out of the team adding in a bunch of ridiculous effects coming out of its mouth, presumably because it was mewing or yawning.

I am absolutely floored by how paint by numbers this episode felt. Not that I didn’t like some of those aspects but I was sitting on my couch, slack-jawed that HALFWAY THROUGH YOUR FINAL SEASON you’re introducing a fetch quest for the villain that can’t get started until she traps our favorite(?) chaotic good Imp, Mr. Mxyzptlk. Seriously, we spend the entire episode faffing about in a race against time that never really feels like it has any urgency.

Plus, now the rest of the season is going to be a race against Nyxly (and Mitch) for these totems? Sure. Fine. Whatever. If it gives the season a clear direction and a central goal, I’m all for it. What I wouldn’t have given for these things to have been seeded in the first half rather than the Phantoms, though.

3. Toothless Critique? In MY CW show?! It’s More Common Than You Think

Coming off of the Very Special Episode about gentrification last week, it feels incongruous to shift 100% to superheroic nonsense in “Mxy in the Middle.” Because Supergirl is a show that deals with both fantastical superheroics and topical, grounded commentary rather than solely trafficking in metaphor and allegory, it has a more difficult job balancing the two tones than it would leaning farther into one or the other. This is an example of an episode where the two clash HARD rather than seamlessly transitioning.

In “Still I Rise,” Kara talked about how Nyxly’s sentencing in the Phantom Zone fed her resentment and was more destructive to her. The episode also talked quite extensively about how important it was to have a system that, rather than being punitive, was rehabilitative. There was more to it than that but I only have so many words. Here, however, the episode shows us one confrontation where Alex shows up with a phantom zone projector, Nxyly insinuates she was always kinda like this, and Kara ends up declaring they’re taking her down no matter what.

The underlying sentiment of – our prison system, and even the idea of a prison system, is fucked and the way we think about, and treat, “prisoners,” both currently and no longer incarcerated, is extra fucked – should remain consistant regardless of the “innocence” of Nyxly, and so when the set-up seems to negate its own point and then frame that as the correct move, rather than A move a character is making, it feels wishy-washy, especially when it’s only been one episode and especially, especially when the personal motivators seem to be playing second fiddle to the good vs evilness of it all.

It felt empty and that’s not what you want to feel from a final season.

4. There are ALIENS who FLY Lena. Magic isn’t so ridiculous

When Arrow first delved into magic, Ollie’s skepticism could be understood. Superman was not a part of this universe. Aliens weren’t really a thing. And The Flash not dying because of overheating was the closest thing to a real supernatural experience this universe had seen. Here, Lena has LITERALLY SEEN PEOPLE FLY and the existence of aliens and superheroes who can do some pretty incredible things with just their mind is old hat. Her doubting that magic exists and scoffing at her mom being part of a Coven? That felt very forced.

I get it. She fits an archetype and this is that archetype’s answer, even if it is more tempered, but come ON. Her brother was Lex “I wanna kill Superman” Luthor, you had to have some experience with magic, even if you thought of it as advanced tech. GAH! This bothered me more than it should’ve, mostly because, again, everything around it was so standard and dull.

Woman wants to learn about past, goes to parents hometown, is shunned with no explanation upon giving her mothers’ name, is yelled at despite not actually knowing jack all because of what her mom is thought to have done, then we find out that her mom was actually completely innocent and are treated to a true-crime reenactment flashback.

I was extra mad that her mom was innocent because it would have been much meatier and more interesting to have had her mom be either a different woman back home or a more complicated figure. It would give Lena a plot to have that doesn’t revolve around revenge or being the team’s Q at least.

For all my griping and grousing, I actually had a lot of fun when Mxy was on the screen. Last time we saw him in a much improved form, he brought the right amount of impish energy without overdoing it. The same is true here, though the writers try to inject a bit more pathos into things since he’s pretty useless without his powers, which is actually a really cool dynamic that could have been used to comment on power and privilege and…they don’t really do anything with it do they?

Not really. His musical number at the top is delightfully uncomfortable, his attempts to help feels like a kid at a bring your child to work day, and the copy machine failure was a great prat fall but beyond that, he really isn’t given anything to do or talk about until the end, where he very blatantly talks about his privilege and how he ultimately traded Nyxly in to keep it. That last part sounds interesting but trust me, it wasn’t, cause it was done in an exposition dump 2 minutes before the end of the episode and about 1 minute before he was eaten by the orb. Goodbye Mxy, we hardly knew ye.

That about does it for now! I know I didn’t talk about Nia but I did that more than enough two weeks ago and really, it was just the resolution to that in a quick way. What did you all think of the episode? Let me know in the comments and I’ll see you all in a week for part one of the hunt for the totems! I think. Until then, stay super y’all. 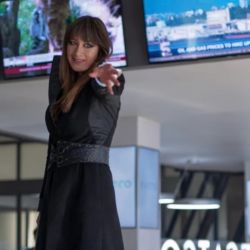 It’s week three of TOTEM WATCH. Our intrepid reporters are out there scouring the globe for news on which totem will be found next, who will get there first, and why the humanity totem was caught making out with the hope totem in the back of a Dennys. More on this, at 11. 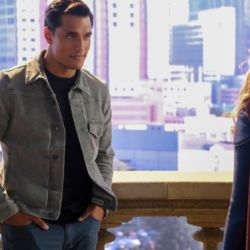 Things are getting interesting as the battle for the next totem commences in a way that’s not just a rehash of “The Gauntlet.” This change makes for a less fun episode but hey, it could be worse. We could still be fighting the Phantoms. 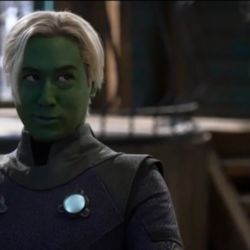 Five Thoughts on Supergirl‘s “The Gauntlet”

It’s the start of The Gauntlet, a seven episode hunt for mystical macguffins to teach life lessons. We’ve got our template for the rest of the season and it has given me the courage to say: I think I’m going to enjoy these episodes.