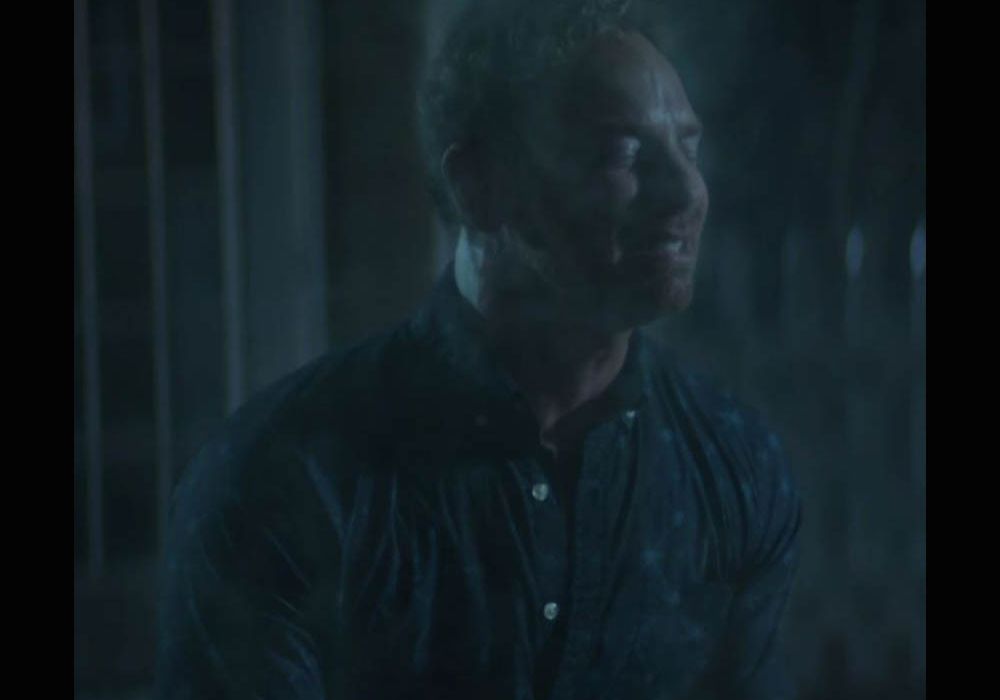 Hey Swamp dwellers! Welcome back this week as we are looking at this week’s Swamp Thing episode from DC Universe, “The Price You Pay”. Keep your hands inside the vehicle at all times and grab your fire extinguishers in case of spontaneous combustion.

“The Price You Pay” deals with a bunch of stuff, but it is really Daniel Cassidy’s episode to shine. Literally. The episode takes on the familiar framing of giving us flashbacks to show how a character got the way they are (I just finished watching Jessica Jones season 3 and they do something similar with Trish). In this case, we get flashbacked to Cassidy sitting on the film set for the Blue Devil movie, bemoaning the fact that he was just the stunt guy and he was bored because the star was such a diva. He gets approached by a familiar figure, the Phantom Stranger we met last episode albeit in much more dapper clothing this time. He obscurely offers Cassidy a Mephistophelian bargain that ensures that Cassidy would remain in Marais and that a woman would be coming to guide him – this would be Madame Xanadu I presume – in return the director and producers of the film get so sick of the lead actor’s shit, they offer Cassidy the role on the spot. So it seems as if the Phantom Stranger has been playing a very long game in Marais and setting the pieces he needs into place.

The seed set by the Phantom Stranger starts bearing fruit eight years later when Cassidy is woken from the coma he was in by Woodrue’s experimentation with the mutagen and it seems to set something inside Cassidy off that causes him to heat up and emit blue flames. After a frantic escape from the hospital, he is sedated and returned and Madame Xanadu does something to ease the flames inside him. We still don’t know what his full role in Marais is yet, but this is a step closer to his destiny.

At the end of “Drive All Night”, Woodrue informs Sunderland that he may have discovered a great breakthrough, but first it would have to be caught and studied. Sunderland promises to send hunters into the Swamp to catch whatever Woodrue needs, which is of course Swamp Thing/Alec Holland. Those hunters end up seriously out of their league as they try to trap and tranquilize Swamp Thing, who learns a little more about his physical abilities in response. Despite Swamp Thing striking back with considerable force (he does a really cool thing with smacking trees and firing dangerous wooden splinters), the hunters manage to escape and end up at the hospital ER for their wounds. This of course stirs up the ant nest about a serious danger out in the Swamp, and Abby being confused because she does not believe Alec would respond so violently. The fact that people are injured means that the Sheriff’s department has to get involved. Therefore, Sheriff Lucilia sends the hunky deputy Matt out into the Swamp to see what’s up.

3. It’s About Ethics in Mad Science

So Dr. Woodrue does a totally uncool thing in this episode. Frustrated by his belief that Abby is hiding information from him and needing a win with Sunderland, Woodrue spikes Cassidy’s IV bag with the mutagenic material he got from Abby. This leads to Cassidy waking from his coma and burning the bright blue lights. Of course Woodrue did not get any sort of informed consent to do this, but this was the sort of action we expected from him ever since he first showed up. Especially as he was the one that developed the mutagenic material that Sunderland was dumping in the Swamp in the first place. Woodrue’s conscience, namely his wife Caroline, is extremely unhappy when she learns about what he did saying that it could mean the end of his career if the college Board of Regents ever discover it. This creates an interesting parallel between Woodrue and Alec, who if you remember was working for Sunderland because he was discovered fabricating results for his research.

I mentioned at the start of these recaps that I have never read any of the Swamp Thing comics. This is still true, but it’s impossible to get six weeks into this and not pick up at least some of the major plot elements from the comics as I research stuff for these posts. One of the things I have learned is that in the comics it is Abby’s uncle/father (depends on which series I guess), Anton Arcane is one of the notable villains for Swamp Thing and he seems to be of a certain mad scientist bent. I feel that the show is using Woodrue in this place – not only is he the one that created the mutagenic agent that started all these troubles and led to Alec becoming Swamp Thing, but in trying to cure his wife’s condition he has the motivation to do unwise and risky things that will pose a serious threat to our heroes. Even if it means sacrificing his career or even his humanity.

We get a bunch of answers to lots of little mysteries in this episode. First off we find out that hunky deputy Matt Cable really was the figure in the boat in the pilot that shot and blew up Alec Holland. Sheriff Lucilia is not happy to find out that Remy Dubois was telling the truth last episode. I get the feeling that she is not so mad about what Matt did, but rather for whom Matt did this. She says that she has worked hard to make sure that Matt does not fall under Sunderland’s influence and is angry that he has put his own career and independence at stake for just a bit of cash.

As I mentioned above, we also get to learn a lot more about Daniel Cassidy and the deal he made that is keeping him trapped in Marais.

Let’s see… what other secrets were revealed? Oh yeah! Since Matt was sent out by his mother to hunt down the threat in the Swamp, he discovers Swamp Thing and they almost fight until Abby intervenes and tells the hunky deputy that he is actually Alec and she is helping him recover. This creates a bit of a crisis for Matt, since we know that he is the one that tried to kill him at the beginning and he does not know if Alec would be able to identify him.

Finally, Abby confronts Sunderland over the attempted mugging of Liz in the last episode, that led to a comatose Cassidy, and it seems like both of them have pulled off the kid gloves. Sunderland is no longer hiding his influencing the events around Marais, and Abby is having none of it.

And it is not a road trip…

The very end of the episode has Abby and Swamp Thing together in Holland’s lab and he talks about how he needs to dig deeper into the Green that surrounds him, but he is afraid that if he does he will lose more of what made him Alec Holland. Abby empathizes with him and says that she is still there for him and still sees Alec inside the viney tangle. Then Swamp Thing grows the above flower out of his hand and it releases a cloud of spores that surround both of them. When Abby looks up she sees Alec as he used to be and he was able to speak to her as well. There is definitely some psychotropic stuff going on there. Unfortunately the episode ended, so we’ll have to wait until next week to see what they say to each other.

– To research something for this post, I went back and rewatched sections of the Pilot episode and it made me reflect how much I regret that we couldn’t spend more time with Alec and Abby before he became Swamp Thing. They were a really interesting a fun pair to watch. Now it’s all swampy shadows and vines.

– Swamp Thing has done a really good job subverting my expectations for Madame Xanadu. I was half expecting her to be one of the antagonists, and in league with whatever darkness is in the Swamp. Instead, she has turned into an interesting and caring character, especially in regards to Cassidy.

Alright fen walkers, that is all I have for you this week. If you hear something crunching through the dark woods, you best run. Discretion is the better part of valor after all. 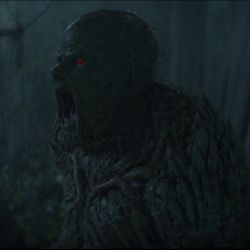 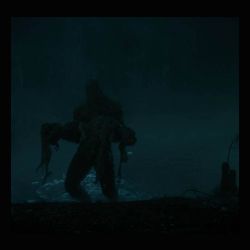 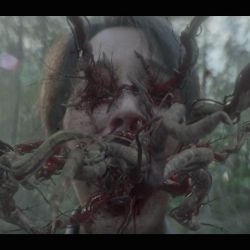