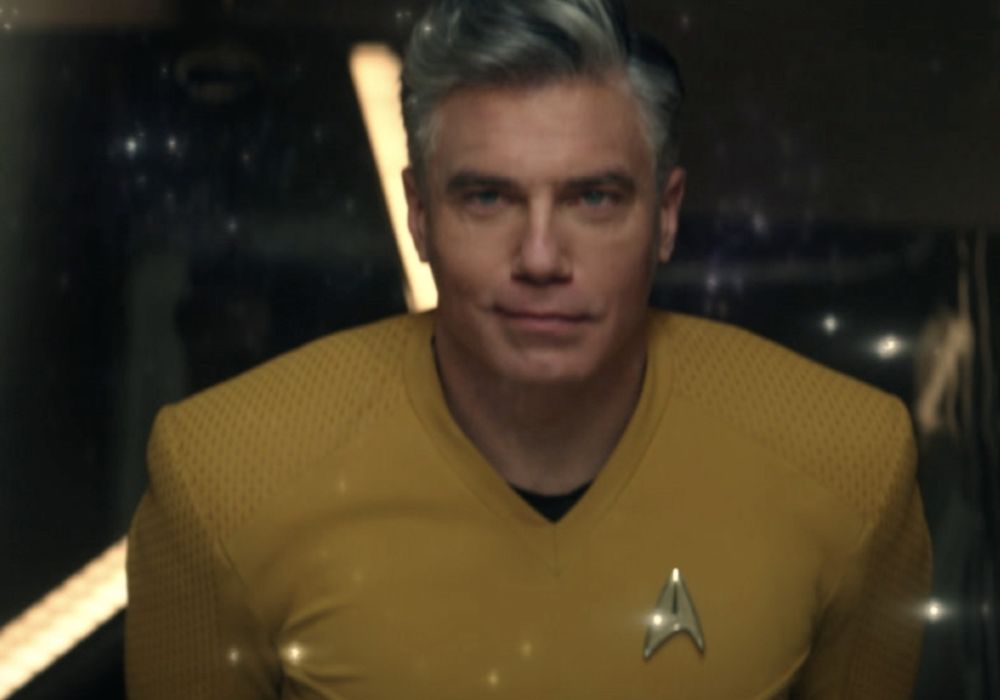 Christopher Pike is called back to the Enterprise to rescue an old friend, but this first adventure spawns a new five year mission for the captain. Spoilers Ahead!

1. Recap and Return To Form

During his arc on Star Trek Discovery Captain Pike was shown his future. A future that long time Trek fans know all too well. It is an unchanging and horrible fate for such a good and honorable character. It has also frozen him in his own prison. Choosing to stay away from Starfleet, even knowing his future is set in stone, Pike remains in his snowy cabin home in Montana. The only thing that gets him out of his home is the call to rescue his former Number One, Una, who has been captured during a failed first contact mission. It is through this set of events that the writing team for this first episode so ingeniously fills in viewers, new and old, on what has happened to Pike in the past. We are never burdened with the retelling of necessary information, it is simply and naturally dropped into this new story line. There is thankfully no formal recap at the top of the episode. This new series stands on its own with previous canon as minor “required” knowledge, rather than a crutch holding it back from running at full speed.

Because the recap of information is peppered throughout the episode, at no point does this story feel weighted in any one direction. It simply gives us set up as to where these characters are in their lives, whether you are new to them or not, and throws you in, knowing they are holding your hand just tight enough to guide you and not drag you into the world of Star Trek. This is where the return to form comes in. Unlike the majority of other new shows that have come out under the Trek banner in the last few years, Strange New Worlds is going back to episodic adventures where we will meet and learn more about the main characters, rather than being given a few set crew members to follow along with a storyline that takes up an entire season of television. It is a format that has worked for many other shows over the years, but is mostly having a hard time finding its footing within Trek. I truly appreciate what those shows are trying to do, but for the most part their messages are forced, muddy, or lost in the scope of what they are attempting. This premiere episode goes back to the basics while still maintaining a partially modern storytelling sensibility and style. So, rather than feeling like a step backward, it’s creating a new version that should be more welcoming to fans of all ages and familiarity.

While I enjoy most of the new Trek that has been released, especially the episodic (and comedic) Star Trek: Lower Decks, this pilot episode felt like such a breath of much needed air, that I have sat down to watch it three times (and a fourth as I write this), just to make sure I wasn’t letting my own biases cloud my judgement as to whether or not it is a good episode of t.v., and not just following guidelines for what I like most about this franchise. Weekly adventures, a likable and relatable crew, and social commentary that is relevant and applicable to modern society has been the backbone of this property and this new show is embracing that. It is back to basics while still giving viewers something very new. This can’t be social commentary as it was in the 1960s because we are dealing with a very different world now, but it also needs to feel timeless and so far, Strange New Worlds is doing that. The sweeping adventure, techno-babble, and delightful cheesiness are all there without over-doing any of it.

2. Reverent To and Reworking Canon

“Strange New Worlds” is doing something that almost no other long standing property has done before. It is a prequel series, something no longer new to Trek, and using long-standing and concrete canon/continuity while blending it with non-canon, or in this case, unused canon to create a new thread in the ever expanding Star Trek continuity. Pike and a few of the other characters in this show are based on a version of the crew that was originally never meant to see the light of day. These characters were from the original Star Trek pilot shot in 1964 and all but Spock were thrown out to make way for the version fans have known for nearly sixty years with Captain Kirk and his crew. Later in the original series, the pilot was re-cut as a pre-Kirk storyline that tied into Spock and Pike’s past and thus Captain Pike and the other characters shown in the flashbacks from the pilot became canon. Threads introduced even as early as this first episode like Spock’s fiancée T’pring are canon, even sub-canon like ideas and details used in little read novels and the animated series from the 70s.

For someone like me, who knows a lot about Trek, this is a fun use of the existing knowledge and easter eggs that is NEVER harming or weighing down the plot, but enriching it for those in the know, and simply telling a new story for the neophytes just looking for a new sci-fi show to watch. Now, I know a lot, as someone who has watched all things Trek since the time I was four years old (That’s 32 years of fandom for those asking), but there will be the purist fans out there, who claim things are wrong because Spock’s fiancée has been brought into the story at this point in time, his quick uses of emotion (even seen in the original series!), or that Admiral Robert April is now a middle aged Black man, and not the old stuffy white guy with gray hair as he was in unused Original Series footage, and later in the animated series. It is those fans who can’t appreciate the balancing act that comes with creating something new in a such a long standing franchise. Not only does this show stick to the established canon, it is properly expanding upon it, and doesn’t create a whole new timeline via time travel, like the J.J. Abrams created Kelvin Trilogy did, in order to make something new yet familiar without the constraints of fifty plus years of canon.

3. Reacquainted With the Crew

This first episode gets us introduced and re-introduced to a few famous characters, and a group of whole new crew members to fall in love with. This take on Pike, Spock, and Number One were brought back into the story via Discovery so those who watched that, are familiar with these portrayals. Beyond that trio, we have some fan favorite characters with new faces, with Cadet Uhura joining the crew, and a pre-Starfleet Nurse Chapel assisting Dr. M’Benga in Sick Bay. M’Benga, Erica Ortegas, La’an Noonien-Singh (keep that name in the back of your mind), and Chief Kyle round the rest of the crew that we have come to know in this pilot and they are not only strongly written for being brand new, but viewers will feel like they already know them, even before the episode has wrapped. The crew as a whole feels perfectly suited for this franchise, no matter what point you jumped on over the years. They have a wonderfully balanced classic and modern vibe and the entire cast truly shines. Every character feels completely realized, even if they have limited screen time. Halfway through this episode I knew these characters better than the majority of those on Discovery after four entire seasons.

Aside from the use of the long running continuity, this episode does have to reckon with the fact that some important threads were set in motion because of its ties to Discovery. A major event from the end of Disco’s second season is what helps create the scenario at the core of this first episode and, again, without getting bogged down in re-telling everything that happened in that show, we get a brief and naturally placed recap with just enough info for us to be reminded and/or understand exactly how we got from point A to point B within this story. Perfectly executed. From here on out, the show will probably have next to no callbacks to Disco, but if it does I have faith that it will never hurt the momentum of this story. This episode is, by far, the best thing Akiva Goldsman has written and his name is all over this thing, including directing it.

Like the subtle, but necessary update of things like how the social commentary is used and what it is aimed at, the beloved starship Enterprise, the uniforms, and many other
details are updated while still fitting within the continuity of what has come before. Of course there are/will be those insufferable purists who cry about changes, like the bridge of the Enterprise and other details, but again, they have been updated to suit today’s technology while still wholly embracing what has come before. Sorry that the original series was built on cardboard sets in the 60s, but things need to look better. For those willing to look, the weird design of 60s sets are still there, it now just made to look like a real working ship and not what we used to have, as much as I LOVE THOSE OLD SETS.

Final Thoughts This show is beautifully shot and crafted and I can’t wait to see where it goes from here. As previously stated, it is made up of everything that makes “Star Trek” such an adored and revered franchise. And I am not ashamed to say that I was moved to tears more than once while watching this show. It reminded me of what Star Trek‘s mission has been all along; to show us that we (humans) can be better. That a better future is possible, even if humanity and Earth has to go through the worst possible scenarios to reach such heights. With the dark times we have already lived through and are currently trudging through, Star Trek continues to be the light at the end of the tunnel for me that it has been for most of my life. It’s also a ton of fun and wonderfully exciting. I welcome Strange New Worlds with open arms. 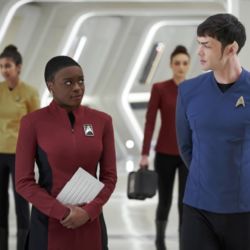