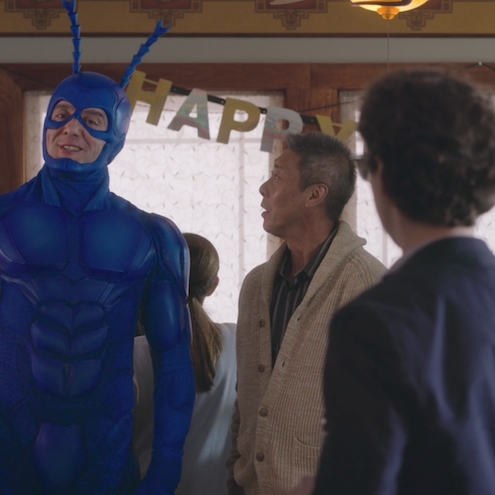 This was probably the weakest episode of Amazon’s The Tick yet. For reasons I’ll highlight below, I’m not sure the Tick works as well as a parody of modern superhero cinema as it does as a colorful spoof of, say, ’80s Marvel and DC comics. With such a small offering of short episode, I’m afraid the series isn’t going to be afforded enough time to meet its potential, or to build an audience that will be interested in seeing how absurd the property can get. With that said, the episode wasn’t a total loss – here are my “5 thoughts” on it:

“Party Crashers” was a shockingly uneventful episode for a series that is only delivering viewers 6 short episodes (so far) in its first season. This episode would have strained to make any impression on me at all, if it weren’t for the introduction of perhaps the funniest character the show has to offer: Dangerboat, Overkill’s sentient aquatic headquarters. Voiced by the great Alan Tudyk, with a sardonic robot butler cadence not unlike his performance as K-2SO in Rogue One, Dangerboat provides an immediate formal, yet silly foil for the brash Overkill character. Of course they banter like a married couple to provide much of the comedy, but the best touch was Dangerboat’s burgeoning hobby as an *record scratch* EDM producer? When we meet Dangerboat, he’s working on a theme song for himself that sounds eerily similar to the Tim & Eric “Beaver Boys” theme song.

One thing The Tick has been subtly good at is foreshadowing things in the background that show up in later episodes and get greater context. What was once a throwaway line said by a reporter on TV, becomes a crucial plot point in a future episode. The “Very Large Man” referenced in a previous episode shows up on a TV news report, towering over the city, pixelated junk threatening the townspeople below. When we saw an unassuming homeless man a couple times in the first couple of episodes, we may never have expected that he’d show up a few episodes later to play a significant role. In this episode, we formally meet “Tinfoil Kevin” the homeless man seen wearing a tinfoil hat in the first couple of episodes. Now, thanks to The Tick’s misunderstanding of social norms, he’s become a de facto roommate of Arthur’s, helping himself to a nice hot shower. As an aside that has nothing to do with the idea of foreshadowing: The Tick displays several social errors in this episode, in fact, which doesn’t provide much comedy, but moves the plot forward and fits the character pretty well. For instance, he doesn’t understand why he’s not wanted at the birthday party for Arthur’s step father, nor does he recognize that Arthur is purposely trying to lie to prevent him from going to it.

3. A Pleasant and Professional Party

This episode of The Tick tried to generate some humor from superheroes and villains attempting to hide in plain sight, whether it was Arthur trying to go to his step dad’s birthday party and not make waves, or Ms. Lint showing up and trying to play herself off as one of Arthur’s co-workers. The problem is that this didn’t generate a lot of comedy. I think we were supposed to laugh at the absurdity of these characters trying to engage in normal life, but the Tick shows up in all his blue rubber splendor and sort of gives up the ghost. There were a couple of charming moments, but not a lot of humor was culled from this plot. In particular, the step father character, Walter, was played with a lot of enthusiasm and warmth by Francois Chau. He’s excited to have The Tick at his party, as he’s something of a superhero enthusiast, asking The Tick all kinds of questions that a normie wouldn’t otherwise know to ask. Again, not much humor or insight comes out of these scenes, but he was a pleasant character to watch in a show where the normal citizens of the city don’t get all that much to do.

I don’t think there’s any other way to say it: Arthur’s hesitation has become a hindrance to the show. The Tick is about embracing the weird and it’s just taking Arthur far too long to follow suit. In “Party Crashers,” the battle with Ms. Lint for Arthur’s moth costume rages on, as it continues to be the macguffin that the series revolves around. But I’d rather be watching he an The Tick running around in costume doing their thing – that’s when Ben Edlund’s comic is at its best. The Tick works better as a spoof than as a satire of the realism of modern superhero shows. There’s a joke near the end of the episode wherein Arthur can’t figure out how to select from the many HUD options available in his computerized moth helmet. He jerks his head back and forth as the AI voice rejects his intent to access an menu option. This joke probably only lasts 20 seconds or so, but it feels interminable and really not funny, especially considering there is no clear rhyme or reason as to why the helmet finally responds to his commands. The situation attempts to play on the modernized versions of superhero costumes seen in movies like Iron Man, Batman v. Superman, and most recently, Spider-Man: Homecoming, but making fun of something overly technical and realistic has diminishing returns. The Tick’s comedic spirit has always succeeding in embracing the utterly absurd and fantastical aspects of comics – the things that are impossible to accomplish or don’t physically make sense, not things that are merely 5 or 10 years away in technological terms.

Tinfoil Kevin: “I am homeless…I’m not office-less.”

The Tick: “You don’t think we should be out there on the trail of this emotionally unbalanced zipline-ejaculating vigilante?”

The Tick: “The other is the mirror of the self. Am I naked, or am I never not naked?” 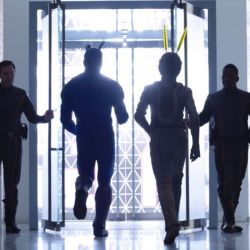 Welcome to Multiversity Comics’ “Five Thoughts” on The Tick. As is customary here at Multiversity Comics, these “5 Thoughts” will regard generally anything that crosses my mind while watching the episode, along with a dash of criticism here and there as I deem necessary. However, the 5th thought is always a collection of the episode’s […] 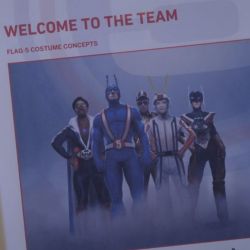 Five Thoughts on The Tick‘s “In the Woods”

Welcome to Multiversity Comics’ “Five Thoughts” on The Tick. Amazon Prime may have dumped the entire series out to us all at once, but this column will be coming out once a week, covering one episode a week, until we reach the end of the season. As is customary here at Multiversity Comics, these “5 […] 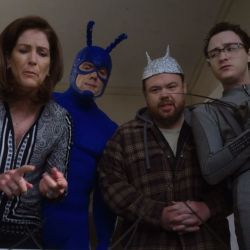 Five Thoughts on The Tick‘s “Joan!”

Welcome to Multiversity Comics’ “Five Thoughts” on The Tick. Amazon Prime may have dumped the entire series out to us all at once, but this column will be coming out once a week, covering one episode a week, until we reach the end of the season. As is customary here at Multiversity Comics, these “5 […]