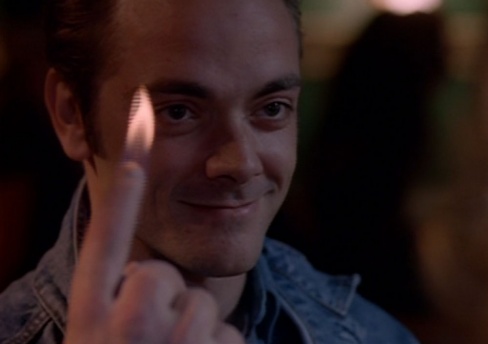 With summer quickly approaching, pretty much every show worth watching is coming to an end. That makes the summer the perfect time to binge watch what you missed along with some old classics. That’s where the Multiversity Summer TV Binge comes from. One of my personal favorite shows ever is The X-Files, and it is my mission in life to make everyone ever watch it. This summer, I’ll be looking back at season one. This week we look at “Fire,” the most ship worthy episode of the series so far and a solid mystery of the week episode.

“Fire” has an interesting set up because Mulder and Scully aren’t really involved with this case until a familiar face from Mulder’s past gets involved but we’ll get to her later. The episode begins in England and on an seemingly ordinary day, a rich, older man is saying goodbye to his wife before going to work when he spontaneously bursts into flames. We get our first look at the villain of this week, Cecil, played by Mark Sheppard, as he look on the scene with a menacing stare. Then we cut to Mulder and Scully who are getting into their car on a much quieter day than usual. They find a tape that says they are probably about to be blown up and are then startled by Phoebe Green, an inspector from Scotland Yard. She brings them into her investigation involving burning deaths of Parliament members.

“Fire” is mostly about these characters and less about the story. It has an easy to follow premise but the real hook here is the drama that unfolds between Mulder, Scully and Phoebe.

No, it isn’t but Scully’s reaction to Phoebe no matter what she does is exactly the wind that sets a ship sailing. Phoebe is a former girlfriend of Mulder’s and their relationship did not end well but when it was good, it is implied that it was hot. These two had chemistry back then and it shows. Scully immediately knows that something isn’t right with her and while Phoebe isn’t in on this crime, she is messing around with Mulder in a really unfair. Bury me with every image of Scully rolling her eyes at and about Phoebe. It’s a beautiful thing and really the first (in my opinion) true inkling of something more than friendship.

Mulder’s personal life is once again a big part of this episode as seen through his relationship with Phoebe but one of the things we get a glimpse at in this episode is his fear of fire. It’s kind of interesting because of all the things that scare him, it’s fire, which is fairly controllable compared to something like aliens from outer space. Phoebe knows this and kind of toys with Mulder in regards to it. He’s constantly put in situations where he has to face this and Mulder almost feels like he has to continuously prove himself and over come this. When he’s hurt with smoke inhalation, it isn’t Phoebe who helps him but Scully. This goes back to my second point and shows just how quickly this bond has formed between them. Phoebe is the worst but she’s still not as terrible as the actual villain of this episode.

Which is absolutely something Cecil throws right out the window the second he can. Like many episodes of The X-Files, how he got his power is sort of implied and not outwardly stated. His name shows up in a couple of different places including in a death after a British Satanic ritual. Maybe he got them that way? I like to think so. Cecil is a psychotic killer and his motivations are shaky at best but that’s kind of what makes him scary. He found a niche and has targeted it to great effect. Cecil is played with a lot of charisma and it’s easy to see how he works his way into families like this because he comes off as a kind hearted rogue. He connects with the kids very easily and at a bar, he charms people until things go off the rails. He’s a good villain but I don’t think he gets enough time to become truly memorable. Like I said earlier in this, “Fire” isn’t necessarily about him and it definitely isn’t about his victims. I can’t even remember their names because they honestly were just set pieces for this drama and not really well formed characters.

Remember when I said Phoebe was the worst? Well, she is and she leaves Mulder exactly the same way she did before as she’s caught smooching the MP she’s supposed to be protecting from an arsonist. She leaves Mulder another tape but he never listens to it. He has lost interest in her and he goes back to work with Scully, his truest friend (and true love). Scully questions this but he tells her that there is no point in dwelling on this and he’s right. It is the last we ever see or hear about this character again. Apparently she was at one point considered as a recurring character but that never took form. Like Scully’s sister (we’ll get to that in later seasons) the attempt to bring in another possible romantic interesting just fell flat. Why? Because Anderson and Duchovny have chemistry that you can’t manufacture. They are irreplaceable and their relationship feels like it came together because of these actors. Cecil’s ending is not so great and remains one of the most interesting open endings in the series as far as the mystery of the week episodes go. Cecil doesn’t die and he doesn’t lose his powers. He’s burned up and basically charred but his mutation lets him heal and so, we don’t know what will become of him. He’s in a chamber without anyway to light up and that’s the last we ever see of him.  I love these endings because it feels so Twilight Zone-esque and at any time, maybe with the right story, those characters can be revisited…maybe.

What do you think of this episode? Let me know in the comments below! I’m very excited about next week as we look at “Beyond The Sea,” one my top 5 episodes of the series.