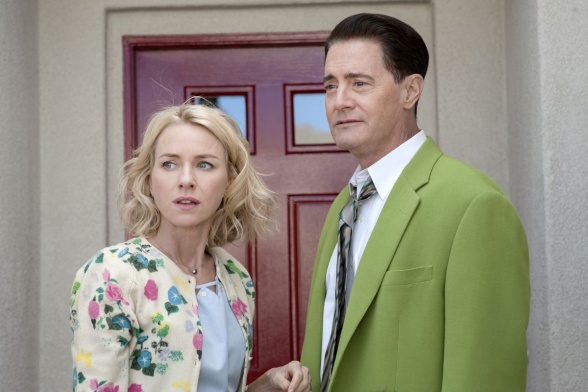 And with another week in the rear view mirror, we return to Twin Peaks: The Return. This week we get our first one hour episode after two double sized weeks. The sixth part of Twin Peaks: The Return is a little slower than the first few episodes but still has a lot to take apart. Let’s jump into this but note there are spoilers all throughout.

Dale Cooper is still very lost, confused and stuck in the life of Dougie Jones. In this week’s episode he is still just as lost as ever at the beginning of things but something is happening in his head. He’s visited again by the One Armed Man and told to wake up. He’s told not to die and to wake up. It’s vital that Dale Cooper get back who he was even though Dougie’s life will leave him in a bad jam. MacLachlan continues to be so vulnerable as confused Dale and I just want to give him a warm place to stay and some cereal. I want to protect this sweet boy from the world but ultimately, he has to fight evil Dale (BOOP) and we’re starting to get there. Little things like his fixation on the cop’s badge and his drawings on the forms all show that Lynch is taking us somewhere. It’s just going to be at his pace.

Every single critique of the women of Twin Peaks is incredibly valid and I will not tell you that the pieces out there about that are wrong. I would love to write about that one day myself. However, part six of Twin Peaks: The Return starts to give the women of this show something a little more to do even they don’t get nearly enough screen time. The first big thing here is that we get to see Diane in the flesh, which kind of happens in a surprising fashion.

When Albert said he knew who they had to get and he knew where she drank, I honestly assumed he meant Sarah Palmer. He meant Diane. Yes, that Diane. The one Dale talks to in his tapes. To make it even better? She’s played by Laura Dern who is the person pretty much everyone fan cast for the role. Diane is at a very nice bar looking sorta like Sydney Bristow but far cooler? It’s a great look and I’m obsessed. We also got to see Naomi Watts’ Janey-E do more than just yell at poor, sweet Dale. She takes matter into her own hands with the money that Dougie owes to some loan sharks. Watts’ performance here is amazing because she one part concerned wife and another part killer deal maker. She scares the loan sharks and gets them to take less money. It’s an amazing scene and finally got me to like the character.

This is a thing I actually said out loud because I was weirdly taken aback by someone flipping a dime instead of a quarter. Let me back up, this scene featured the guy from the end of last week’s episode. You know which one, the huge jerk who had fun sexually harassing women and smoking in a bar he wasn’t supposed to. Well, turns out he’s involved in drug dealing and he meets with the big boss in a very strange scene that plays as Lynchian as it can get. This guy is dressed like a 50’s biker and he’s all over the place with weird movement. He flips a dime to screw with this guy and eventually lets him go. It’s an incredibly strange scene that ultimately leads to something horribly sad.

4. No One Is Allowed To Be Happy

Hello Harry Dean Stanton, you have some explaining to do. Before our small time drug dealer shows up, we get to meet Stanton’s character. He’s an old man that drives into Twin Peaks from the trailer park he lives in and it looks like he does this just to leave the house. On an ordinary day, he’s watching a young boy play with his mother. They’re chasing each other around a bit, all in fun and a crosswalk, a truck driver lets the boy run in front. Seems nice but the truck is huge and this poor boy couldn’t see the aforementioned jerk drug dealer flying down the street. He’s pissed off from his interaction with his boss and is flying in his truck. He goes right through the intersection and kills the boy as Stanton’s character watches on.

This scene, like the murder investigation reveals from last week, start to connect some dots between people. Stanton watches this and he sees the spirit of the boy (I think) rise up into the sky and is alarmed. It doesn’t look like he’s alarmed because he saw that but more that he’s seen this before. I’m very curious about who he is or what he can do. It’s a great sequence that’s so tragic and intriguing at the same time. Lynch did this with Laura Palmer’s death too. You’re stuck on this  violent scene and need to not only gawk but see how everyone else is reacting. The way the camera pans around perfectly captures this and it makes the whole thing so much more unsettling.

5. Ongoings At The Sheriff’s Department

Back at the sheriff’s department, we catch up with Hawk while he’s washing his hands in the restroom. When he takes some stuff out his pockets, a coin with a Native American chief falls out and it leads him to notice something on the slightly broken bathroom door. He investigates and finds papers that we don’t get to find out about just yet.

Meanwhile, Chad is being a jerk to everyone and everyone. He’s a jerk to Hawk in the restroom and then he’s even more of a jerk when he reacts to Doris (Sheriff Truman’s wife) yelling at Truman. Another officer says to him that she wasn’t always like this and he mocks Doris because as it turns out, she’s like this because of trauma. Her son killed himself and Chad thinks that’s funny. Chad is a worse cop than Andy and he should be punched by someone at some point. It’s dark but I think this reveal with Doris and Truman is interesting. Lynch very purposely had our first interaction with this woman be incredibly abrasive and unlikable. We never question anything about her. We see her as the yelling shrew of a wife that this sweet man is stuck with. Lynch plays upon the idea of first impressions and twists that around on us in a really tragic sense.

What did you think of tonight’s episode? Let me know in the comments below!