The Wheel of Time turns, and Ages come and pass, leaving memories that become legend. Legend fades to myth, and even myth is long forgotten when the Age that gave it birth comes again. In one Age, called the Third Age by some, an Age yet to come, an Age long past, a wind rose above the great recap pages of Multiversity Comics. The wind was not the beginning. There are neither beginnings nor endings to the Wheel of Time. But it was a beginning.

Today, we will look into episode seven, “The Dark Along the Ways.”

Within the Ways, the four remaining Emond’s Field folk argue over whether to go back for Mat, with only Egwene among them agreeing with Moiraine that they had not left him behind, but rather he had left them. As for the idea of reopening the Waygate, for the women to use the One Power within the Ways would invite the appetite of a being known as “Machin Shin” to feast upon their souls.

Machin Shin itself is translated to “the Black Wind,” speaking of their fears in their minds and taunting them, attracted to channeling and feeling cold to the touch. When Egwene instinctually channels away a Trolloc that attacks her, she accidentally attracts it to their location, a danger that Moiraine knows, as does Loial, but seemingly nobody else in the group (Lan included).

As a side note, the fact that the Waygates can only be opened by channeling (in contrast to the books, where it was a relatively mechanical process) seems like an odd oversight, as how could they be expected to leave the Ways without channeling or having a channeler at all, especially when it came to the Trollocs, who do not seem to have any such person with them? Yes, they did have no apparent means of escape in the case of that lone Trolloc, but the way Moiraine and Lan discuss, it seems as though they believe the Trollocs are all going that route, meaning they had to have some form of channeler.

That channeler, judging from a brief moment, seems to be Padan Fain. While it seems that Padan Fain let them through, there is next to no attention given to the idea that he could be a male channeler who is merely evil and not mad, nor how he controlled the Trollocs, effectively creating what at best begins to resemble a plot hole.

The group exits in Fal Dara, also known as the Fortress City. According to Loial, it is the “last bastion against the Blight” (which he does not explain, but seems to be a dark power of some sort), and according to Moiraine, it is a day’s walk from the Eye of the World.

The idea that there would be a fortress as a “last bastion” against the forces of evil one day’s walk away from the location that people claimed in a previous episode to be the prison of the Dark One himself seems rather ridiculous, as if it is such a big deal that they do not expand, but the forces of the Light are essentially on his doorstep. Rather than seeming threatening, it makes him seem all the more pathetic and worthless as a villainous force.

The fact that Malkier is noted to have fallen to the Blight, with him brought to Fal Dara, indicates some even stranger distances: either the Blight expands out radially in many directions, or the supposed kingdom is less than a day’s walk from either Fal Dara or the primary location at the heart of this Blight.

Beyond that, the presentation of the Blight itself (which is never fully explained, just stated as existing and shown) feels a bit over the top. Rather than being a location of sparse vegetation and death, as per an actual blight, it is akin to an encroaching forest of gnarled trees so thick that it cannot be seen through directly. Rather than being a force of death, this presentation does not feel much like a “blight” at all, just invasive plant species that conveniently stopped a bit away from Fal Dara.

In general, the idea seems to come across as not one of overall storytelling, but rather basic math.

At a tavern, Moiraine sees the Seer, Min Farshaw. While she does not appear to be a channeler, she has the virtually unique ability (be it blessing or curse) to see “viewings” around people regarding their futures. These prophecies are never, ever wrong.

In the interest of clarity, it seems prudent to identify exactly what each vision was.

All of the romantic behaviors all come to a head in this episode.

Nynaeve accidentally reveals Perrin’s feelings for Egwene when Rand argues that she left him and so has no say in how she treats Mat. The group splinters over this revelation, but while it came across as very awkward, perhaps it is best just to her it out of the way for storytelling purposes. With Egwene and Rand reconciling relatively easily, it seems all the more just a quick wrap-up to fit in with the existing intra-group tensions.

Lan and Nynaeve connecting romantically is a little better, though still very fast, only being in the space of a single season. Still, the storytelling makes it work, more or less. The fact that Lan is revealed to be the lost king of the fallen kingdom of Malkier is a little weirder, but the way the term “Dai Shin” is peppered through the episode makes it a little less strange as well.

In general, the pacing on these romances, all conveniently coming together or being shown in the penultimate episode of the season, seem more about wrapping things up for the big finale than treating the story as the first part of a longer journey. Lumped together, they come across as rather worrisome, as if the script is rushing to wrap up for a final episode instead of being the end of one book out of fourteen.

5. Shining Walls and a Dragon Reborn

The cold open shows an Aiel woman, notably one blonde, not red of hair (and thus likely not one by blood), pregnant as she faces armored soldiers with nothing but a spear, evidently giving birth during the fighting or shortly after it. As we later learn, the identity of her son is none other than Rand al’Thor himself, his father Tam having been a soldier in that battle on the slopes of the mountain of Dragonmount. According to credits, the woman is Tigraine Mantear, who is indeed important to others, but for reasons that are mostly irrelevant for this season given those who are connected have yet to be introduced. The fact that she is so mobile and proficient in combat may seem odd, to say the least, but that is neither here nor there.

At night, Rand dwells on his travels so far. When he broke down the door of ironwood keeping him from getting away from Dana, he had used the black male channeling (hereafter called saidin given the explanation in supplementary pieces also released by Amazon but not within the episode itself, as opposed to the white saidar of women). Tam’s feverish words about a boy taken from the mountain to his wife Kari shows all the more, and Machin Shin gives the final piece of evidence in its rants into his mind. As Moiraine and Siuan had thought, there is the Dragon amongst the group, and it is Rand who has been the Dragon Reborn all along.

With that evidence, and the knowledge that any who stand between him and the Dark One will die, he and Moiraine leave Fal Dara together, going to the Eye of the World without his friends.

Until next the Wheel wills. Do you have any thoughts, questions, or concerns? Feel free to leave comments below. See you next week! 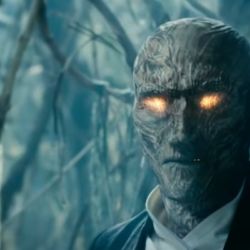 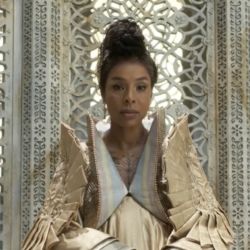 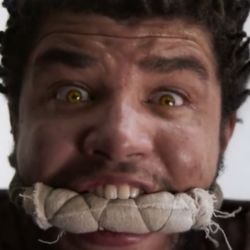 Five Thoughts on The Wheel of Time‘s “Blood Calls Blood”