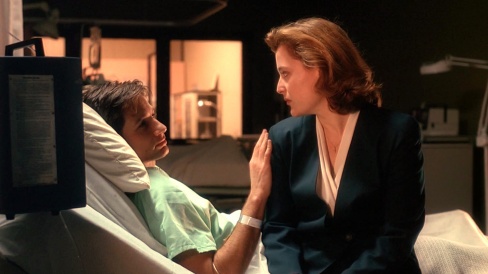 With summer quickly approaching, pretty much every show worth watching is coming to an end. That makes the summer the perfect time to binge watch what you missed along with some old classics. That’s where the Multiversity Summer TV Binge comes from. One of my personal favorite shows ever is The X-Files, and it is my mission in life to make everyone ever watch it. This summer, I’ll be looking back at season one. This week we look at “Beyond The Sea,” one of my personal favorites of the entire series run and a huge turning point for Scully.

“Beyond The Sea” has a two fold premise instead of just a straight forward case. To begin things, Scully’s parents come to visit her for dinner and to catch up. After dinner, late at night, Scully sees her father sitting in a chair across from her. He vanishes as the phone rings and it’s Scully’s mother telling her that her father suffered a massive coronary and has passed away.

Elsewhere, a young couple, making out in their car, are harassed by a strange man pretending to be a police officer. He kidnaps them and because of how it was done, this is believed to be a repeat offense so there are only a few days to find them alive. This comes back to Mulder who is called in to talk to Luther Lee Boggs. He is a death row inmate who was on the table to be killed but got a last minute stay. He now claims that this experience got him close to death and has given him powers. He now claims that he has information about this case and wants to be taken off death row in exchange for information. Given Scully’s mental state after losing her father, you can see how things are about to get dicey.

2. This Isn’t Silence of the Lambs, I Swear

No, it really isn’t. “Beyond The Sea” is often compared to that movie but that comparison couldn’t be farther off the mark. Luther Lee Boggs (played to perfection by Brad Dourif) is not Hannibal Lector. Hannibal Lector is calm, gives off the aura of class and sophistication despite being a guy that kills and eats people. Boggs is dirty, angry and by no means an easy villain to idealize. Scully and Boggs also have no glimmer of respect between them or admiration or any kind of warm feelings. There is nothing here besides anger and manipulation. Dourif is known for playing unstable characters and is probably best known as the voice of Chucky. He plays this role with so many different layers. He’s a terrifying man. He’s violent and unstable but he’s also like a scared dog. He’s able to manipulate Scully and ultimately fails to get what he wants. I have watched this entire series through multiple times and Boggs is the most memorable one off villain the show gets.

3. Mulder Takes A Back Seat

Mulder is the catalyst for getting Scully and Boggs to meet but this is an episode all about Scully and it’s a really important one. I’ll get more into this in the last point but for this point I want to talk about how the focus has really shifted here. Many of the first episodes of this series have focused on Mulder and his history but with “Beyond The Sea” we get very acquainted with Scully and her issues with her family. They are far from dysfunctional but one of the things really looked at here is Scully’s decision to not go into medicine as a career. She went into the F.B.I. instead because of her desire to do the most good and it’s something that always sat as a big difference between her and her father. At his funeral, she reflects on this and worries that he was never proud of her or felt like she had done something so horrible that he didn’t love her as much. This has weighed on Scully every day of her career and with his sudden death, she never gets to really address that with him. Again, they didn’t have a horrible relationship but these feelings were there and very valid things to feel. This is also the beginning of a theme that we’ll see come up again later on. The X-Files gets into the father/child relationship quite a bit and this is just the beginning of that.

Yeah, me neither. For all the things that “Beyond The Sea” does right, it does at times forget there are victims here. You never get the urgent feeling of time passing by. There is a time frame to find these kids based on the last incident and there’s a stated urgency but it never feels urgent. This one hour episode feels much longer and while that’s great for all the character work it does, it isn’t good for the actual kidnapping here. I’ve seen this episode multiples times and I cannot tell you the names of those characters. Did they have names? The world may never know.

5. The Skeptic Becomes The Believer

The most important thing about “Beyond The Sea” is that it becomes a turning point for the series and in the working relationship between Mulder and Scully. After witnessing Boggs have one of his visions, Mulder seemingly disproves his statements with a trick and when they are walking out, Boggs begins to sing “Beyond The Sea,” the song played at her father’s funeral. She looks at him and sees her father there and in her father’s voice, Boggs asks her if he got his message. Later, Scully drives back to the motel and notices a few things that he said are real. She ends up following his vision and finds a charm belonging to one of the victims and signs that they had been there.  At this point, Scully begins to believe in Boggs and as the episode goes on, she fights against Mulder who doesn’t believe.

The X-Files at this point had not gone out of its way to make Scully annoying but her blatant disbelief despite the things she saw really went against everything she supposedly stood for. She wants proof of things but her experiences are apparently not enough and this cycle would eventually become very exhausting. So, at 13 episodes in, The X-Files took the next step in evolving Scully and made her a believer with realistic reservations. This changes things drastically as now she and Mulder are basically in the same place. The rules have been changed and it makes the dynamic even more interesting now as she goes into cases with the desire to learn and not immediately disprove things. Scully never reaches the level that Mulder is at but this episode marks a shift for her and it takes the show to the next level.