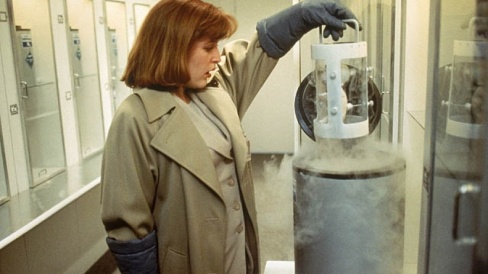 Summer is long gone and that means the Multiversity 2017 Summer TV Binge is winding down. I’ve spent the last couple of months looking at the first season of The X-Files and we’ve hit the finish line. This is it. The big season one finale that basically sets up everything that’s to come for the next 9 years. “The Erlenmeyer Flask” is where everything really takes off for the bigger mythology of the show so let’s jump into this.

“The Erlenmeyer Flask” starts with a big car chase that feels really out of place for the show. When this ends, a man, who’s bleeding green blood jumps into the water and the theme music hits. The driver of this car is Dr. William Secare and he’s so important that Deep Throat himself has approached Mulder with this case. This leads Mulder and Scully to his lab partner Dr. Terrance Berube, who’s working on something called Purity Control. What comes next is an episode that blows the lid off of what Mulder believes in most – extraterrestrials. They’re real and they’re here.

Here. We. Go. The actual Erlenmeyer flask that the title of the episode is talking about is labeled Purity Control. What is Purity Control? A government run project to create alien human hybrids. Dr. William Secare was an alien-human hybrid and when he entered the regular world’s population, the shadowy side of the government that Deep Throat works for, sprung into action. This is just the tip of the iceberg of what experiments are being done but I’ll stay in the here and now for the purposes of this recap/review. Purity Control is an attempt at control over the population but it exists entirely in secret and for this episode, this is a huge twist. For the entire first season, we know what Mulder believes in. We know what he believes happened to his sister and there is a big difference in that and what he and Scully actually uncover here. It jumps deep into the conspiracy side of things but also works in aliens in a really exciting way.

Throughout these first season episodes, Scully has gone through a big transformation. Initially written as the skeptic who’s there to prove Mulder wrong, she’s become a part of these cases in a truly meaningful way. Her skepticism has ceased to be played up as an annoyance and is now there to ground Mulder. She’s not afraid to believe in what she sees and what she sees is the key word here. Scully believes in science. She believes in facts and proof and that’s why it’s brilliant that she’s the one who actually infiltrates Fort Marlene and gets the alien fetus herself. Scully doesn’t have the kind of belief in aliens and conspiracies that Mulder does but this is a big moment for her. She is holding the proof and this is something that does change her going forward. She fully gives into investigating the x files and even though she does still have her reservations about how willingly Mulder believes things, she is in this now. This is her no turning back moment.

Deep Throat, you were gone so soon but ultimately, this is for the best. Listen, after Scully gets the alien fetus, Mulder sees the guys in the tanks and they find out the bacteria in the Purity Control flask is not from Earth, Deep Throat is just in the way. Deep Throat gives Mulder information and for a little while, this works. If this had kept going, this would have been weird. Deep Throat is either with us or against us. There is no room for an in between kind of character and his death pushes things forward in a really good way. When you’re dealing with secret operatives in the government experimenting on humans with alien DNA, there is no one to trust and with Deep Throat getting killed by people on his own side, it makes the stakes that much higher. Mulder and Scully have discovered the ultimate x file here and Deep Throat’s finals words, “trust no one,” will be so crucial for these two to remember.

5. Shutting Down The X-Files Division

I hate to break it to you but investigation of the x files has been shut down. Mulder and Scully are being put into new divisions and that’s that…

Just kidding! But really, the season ends Skinner shutting Mulder and Scully down after all that went down with them and Deep Throat. It all goes full circle back to the first episode. Scully was sent to watch what Mulder did and the higher ups and finally gotten their way and have shut him down. It’s also one hell of a way to end your inaugural season before you’re sure you’re getting renewed but that’s what kind of makes it genius. However, since we know that the show goes on for another 9 seasons, we know they’re not done. What I like the most about this goes back to a previous point. Scully’s reaction is panicked and she’s actually upset about this. Mulder has kind of accepted that it’s over but Scully knows now, for sure, that something is going on and she needs to be a part of solving it. How they get back to doing their thing is a big part of the first few episodes of the second season and maybe, next summer we’ll get there.

When X-Philes (the fandom name) talk about this show, we tend to not like season one all that much. It’s so much ground work for what comes next and with this episode, we enter what I think is truly The X-Files. Mulder and Scully are in this together now and the alien mythology arc has formed. This is like an appetizer. It’s tastes good but it isn’t enough to satisfy you. That’s what this season is. See you next summer!

Summer is long behind us, but the Multiversity Summer TV Binge continues! Although I’ve never been what you would call an anime person, I’m a huge fan of Attack on Titan. I first fell in love with the subtitled version of the show, so I thought it would be fun to revisit the dubbed version. Watch […]