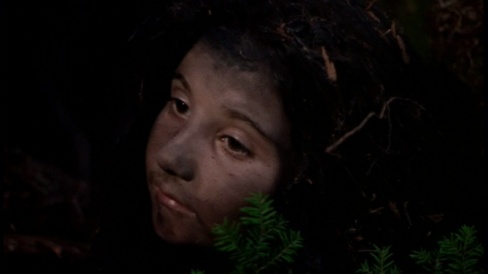 With summer quickly approaching, pretty much every show worth watching is coming to an end. That makes the summer the perfect time to binge watch what you missed along with some old classics. That’s where the Multiversity Summer TV Binge comes from. One of my personal favorite shows ever is The X-Files, and it is my mission in life to make everyone ever watch it. This summer, I’ll be looking back at season one. This week we look at “The Jersey Devil,” a fine but ultimately forgettable episode.

“The Jersey Devil” is the next in a nice string of “monster of the week” episodes for the series. When I say nice, I mean that it actually gives the show a chance to come into its own by stepping away from mythology episodes for a little bit. “The Jersey Devil” begins with the Atlantic City police (what up New Jersey) investigating a death in the woods. It looks like a man was eaten and what’s worse is that it looks like a human did it. Mulder and Scully are not actually called in on this case but Mulder, being the guy that he is, gets involved because he thinks this may have something to do with the fabled Jersey Devil. The Jersey Devil is supposed to be some kind of winged creature that lives in Pine Barrens. Funny enough, I’ve lived here my whole life and I don’t think I heard of The Jersey Devil until I was out of high school. Anyway, Mulder thinks that is what’s going on here but what they learn ends up being something else entirely

2. Evolution Is A Weird Thing

Scully and Mulder discover that there is no actual creature but instead it’s some kind of backwards human evolution. There seems to have been two people, a man and a woman, living in the woods, feral like. They’re scavenger/hunters who behave sort of like carnivorous cavemen. They have killed people in the woods to eat and this has led to the police finding them. This is such a weird storyline because these are actual people with no super powers or abilities. They’re just humans who are basically out of time and the story struggles to find a way to approach that. Mulder’s sympathetic approach helps the episode tremendously but it’s such a weird and strange storyline that doesn’t entirely fall into place.

SCULLY SAYS MULDER IS CUTE! Okay, her friend says that Scully said he was cute but it counts because she doesn’t tell her she’s wrong. Scully and Mulder will eventually kiss and then some but in this episode we start to see them become a little more than just partners. Scully’s personal life is looked at here as she’s seen on a date and talking about having kids and having a family. Scully is in a place in her life where she has to start making these decisions (at least that’s how others see it) and she keeps taking the chances to go investigate with Mulder. The episode ends with her blowing off a potential boyfriend to go with Mulder to meet a contact about what they just witnessed. In just a few episodes, Scully has been through some big changes in her professional life. While she’s not a full believer, she’s certainly becoming committed to these cases. What I like about this is that The X-Files never goes about this suddenly. Scully and Mulder’s relationship evolves very organically with natural chemistry between Anderson and Duchovny. This is an episode where that chemistry starts to heat up.

One of the biggest problems with “The Jersey Devil” is that it kind of wastes the Atlantic City setting. It just has your generic cops who don’t want to work with the F.B.I. and continue to be jerks. Atlantic City used to be interesting and casinos are always full of characters. This episode would have been helped by using the setting to its advantage. If they hadn’t said multiple times that this was Atlantic City, I wouldn’t have known.

“The Jersey Devil” is a “monster of the week” episode so it wraps things up in a bow. At least it should have. It kind of has a downer of an ending when the woman is killed and we find out she had a child who’s now left all alone. I get that there had to be consequences of this whole thing but this just felt so sad and sort of unnecessary? It left me with a bad feeling.

What do you think of “The Jersey Devil?” Let me know in the comments below!