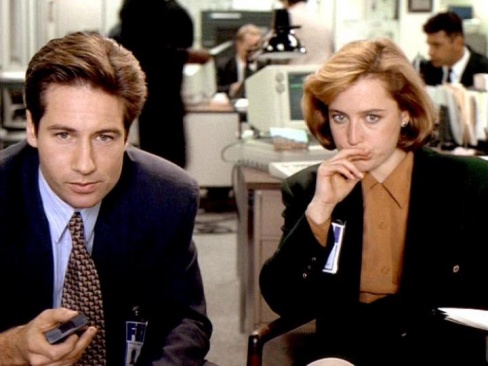 With summer quickly approaching, pretty much every show worth watching is coming to an end. That makes the summer the perfect time to binge watch what you missed along with some old classics. That’s where the Multiversity Summer TV Binge comes from. One of my personal favorite shows ever is The X-Files, and it is my mission in life to make everyone ever watch it. This summer, I’ll be looking back at season one. This week we look at “Shadows,” another early “monster of the week” case that’s pretty forgettable.

“Shadows” takes Mulder and Scully to Philadelphia, Pennsylvania after being called in to give their opinion on a couple of dead bodies with an interesting quirk about them. They have been dead for at least 6 hours and their body temperatures are still 98.6 degrees and it seems that they were killed by having their esophagus crushed from the inside. Because Mulder and Scully have seen some things, they are the first ones you could turn to for this but Mulder decides not to give away anything he might know. This leads the agents to a woman named Lauren Kyte who may or may not be dealing with her own protective ghost.

So Lauren Kyte works for a company that deals with defense department contracts and recently, her boss, Howard Graves, died. She is grief stricken and decides to quit but there’s something else going on here. Howard might still be around as strange things seem to happen whenever Lauren is is threatened. This is why the guys who tried to mug her got killed, why attempted assassins got killed and why her new boss almost got killed. Lauren knew some secrets that Howard told her about but ultimately this is a mess. It tries to be a story about a ghost who wants to protect someone but is also a story about a company doing bad things. This episode never really decides on what it wants to be but this is not surprising as this episode was kind of forced upon the team because FOX wanted to see Mulder and Scully doing more to help regular people.

I have watched this episode about 8 times and I cannot tell you a concrete reason why Howard Graves protects Lauren other than she knows stuff. It’s barely implied that they were a couple and then there’s a whole thing about Lauren being the same age as Howard’s dead daughter if she had lived. They almost fully went in one of those directions but settled on “rich boss talks like no one is around when secretary is around.” It’s not good.

4. An Attempt At Poltergeist

At the end of the episode, Howard Graves’ ghost really lets loose and we get a wild scene in his old office as he tries to settle this whole thing with his replacement and former partner. The X-Files can do scary but this ain’t it. These scares are like a knock off of Poltergeist which is really what the episode is going for on the whole. It never really clicks and just looks kind of cheap.

This isn’t an episode with a lot to talk about so I’ll close out with some great Mulder and Scully moments. They are forever the reason this show succeeded as much as it did. There’s the early scene where Scully knows that Mulder is lying about what he knows about these bodies and then there’s Mulder knowing that she’s lying to Lauren. Six episodes in and these two already know each other far too well. There’s some great banter between the two of them throughout the episode, especially when Mulder mentions that only one person ever succeeded in carrying out a fake death (Elvis). It’s fun watching them even this early on.

What do you think of this episode? Let me know in the comments below.