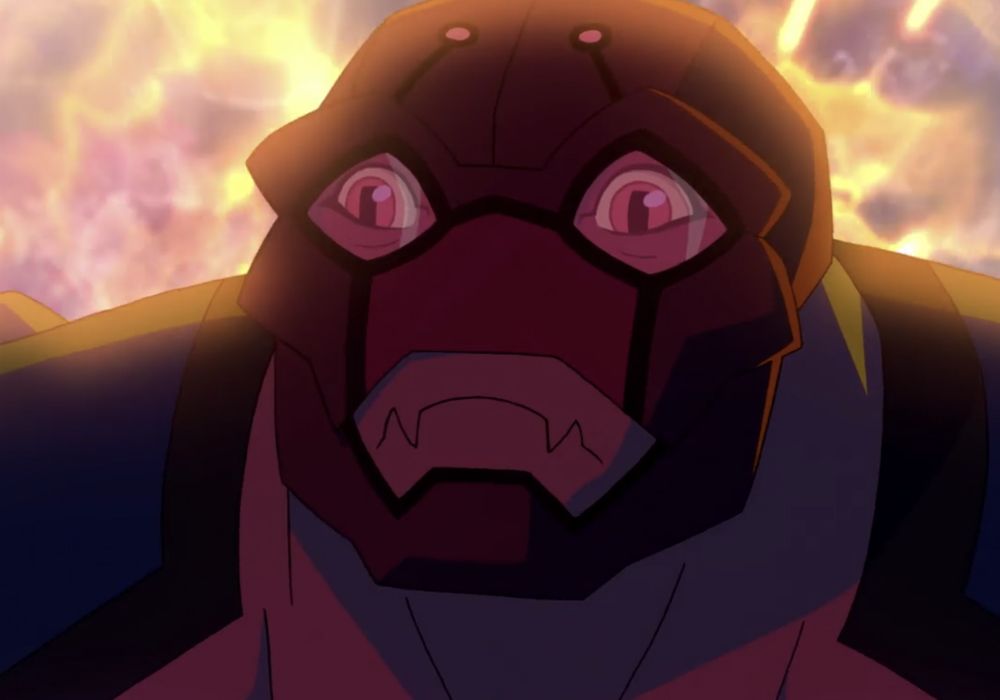 Round 2 of the Young Justice: Outsiders episode drop is underway and we are once again in the middle of it with “Away Mission.” As I touched on in my thoughts on last episode, this second installment seems to be dropping truly episodic episodes (funny how that works) with one-and-done narratives furthering the main themes of the season. In that vein, this episode features the first real look at The Team under Miss Martian as they tackle a mission on New Genesis. All the while Dick tries to train Brion and Halo. As always spoilers ensue! Let’s dive in!

1. A Marxist interpretation of history

This season just keeps borrowing *heavily* from social and cultural questions and issues in a way that is far more explicit than the past iterations of this show. On the books today is Marxism, revolt, and what you do when the bourgeois exploits you, your lives, your labor, the means of production, and really everything you do. So, you know, things that are completely relevant in real life. Right? Anywho…replace bourgeois with “Orion” and the New Gods of New Genesis and substitute the proletariat for the Bugs and we’ve got our characters in this world. I haven’t read any of Jack Kirby’s Fourth World saga, so I would imagine some of this subtext is heavily present, but here its explicit. The New Gods exploit the Bugs for their resources without truly producing anything (other than godliness which I guess is a whole other dissertation in and of itself). Mantis, Forager and the others aren’t having it. Chaos ensues, especially as Forager thinks there are “good” and “honorable” New Gods, trying to bridge the gap and achieve some sort of middle ground as best as possible. Again, there is explicit commentary being made, and I for one am still a fan of the maturity of this show being put to good use instead of just BLOOD CAUSE THAT’S WHAT THE KIDS WANT. Which is bad. Moving on.

2. The Forever People and The Team

This second block of episodes has been sort of self-referential with last episode’s inclusion of the Doctor Fate subplot, and this one bringing back The Forever People, or at least Bear. We met the Forever People in the latter half of season one, and were introduced to the miracles of Apokaliptin and New Gods tech around the same time. We have known these characters existed and Mother Boxes and boom tubes are no longer foreign concepts to us. We have never set foot on New Genesis and been introduced to the other denizens of Supertown until this episode though. It’s fun that Bear comes back to Superboy and Sphere to seek their help in assisting Forager and the Bugs and just how much excitement and exclamation this character brings to the table.

Conner has to send M’gann and The Team in his stead because of Dick and Brion, but it’s good because 1) it showcases the amount of trust the couple has, and 2) it gives a chance (finally) to check in with The Team after the events of the first episode. Suffice to say they are down some members and Tim and Cass are fighting in true teenage couple (but also my surrogate dad is an asshole and has bucked convention and international security to start his own privatized superhero force) fashion. M’gann leads Kid Flash, Blue Beetle, Traci 13, Wonder Girl, and Static to New Genesis to assist Bear, a far cry from the forces the Team had in season two. I love that Traci, Bart, and Jaime were all hanging out dunking on Beast Boy before the mission. This adventure both portrays M’gann as a competent leader and quality next-in-line commander after Kaldur’s move to the League, and gives us a look at how these characters have changed, matured, and grown in two years. It’s wonderful.

So while The Team is off in space, or in a parallel dimension? I’ve never quite understood what space New Genesis/Apokalips occupies in the multiverse. Like is there only one of each? Or are there 52 Darkseids? Can 52 Darkseids say “Darkseid is” at the same time? Hmmm.

Ok, back on track, Team’s in space, Dick, Artemis, Jeff and Conner decide to train Brion and Halo and begin to figure out what to do with them. It’s both a cute moment and also a showcase for Dick’s single-minded selfishness the last couple years. He hacks the League’s zeta tube apparatus to give a “G” designation to himself, Halo, Brion, and Jeff so they can begin to figure out what to do with the duo. They group bicker and quibble, like heroes are prone to do, all the while Halo and Brion are trying to figure out their powers, and it does not go well. This turns into training hour, with Brion realizing he has no handle on his powers, and Halo discovering more lights or auras she’s able to assume in order to activate more abilities. Halo is adorable, and tells Brion he’s broken and wants to fix him, wants to make the pain of his sister’s disappearance, his parents’ assasination, his own exile, his own country’s xenonphobia as it shuts out and deports Quraci refugees, go away. She can’t make it go away though. So Brion decides to back up and strike out on his own, only for Dick to impulsively offer to find Tara. This is not gonna go well. Dick is walking a line of being the worst of Batman, and the best of mission-minded Nightwing/Grayson. Someone needs to yell at him.

Not a development I saw coming, but M’gann apparently has a little brother who is also a white Martian. I think his name is M’comm, but don’t quote me on the spelling. I don’t speak Martian. It’s super cool to again see this show be additive to this continuity in ways that make sense and in aspects of the DCU that are lacking. This show began with additivity with Kaldur’aum, who has since (somewhat successfully) transitioned to the comics. It’s continued in adding to the world of Mars, first with Green Beetle stuff last season, and now with M’gann’s violent, revolutionist brother who wants to tear down the powers that subjugated him and kill his oppressors. Again, a far more mature approach to oppression, social commentary than this show is accustomed to. M’comm is basically the Martian Killmonger from Black Panther. And that’s a good thing. As humans we needed to be confronted with the pain and hurt of minority groups and to live in that, while also affirming our most basic human moral ideals that we need each other, belong to each other, and have to live with one another. Something that M’gann is imminently confronted with as her brother is on a con job to incite violence with the Bugs against the New Genesians on behalf of some third party. She won’t stand for it, and has learned a better way. Ultimately, a better way that he rejects as he kills his two metahuman servants. She couldn’t teach him, the battle continues, and the Team carries the dead back to Earth.

5. The Further Adventures of Forager

Forager is so innocent, and tragic, and believes in a “best” that he so wants to exist. It is so sad that he wants to believe the New Gods are better than they actually are and is ultimately punished for it. He fights for his principles and no one elses, and he is in mourning. Poor guy.

It’s interesting seeing this bulkier, more Ben 10-inspired Forager, as opposed to the Kirby-esque, humanoid portrayal of Forager in the comics. I like the design and appreciate that the artists and designers for this show leaned into the bug-like characteristics of a species called Bugs. It makes this gentle giant more relatable almost. I look forward to seeing more Forager, especially since Greg Weisman and Brandon Vietti have said he’s going to be one of the main point of view characters for this season. There is no more tragic way to watch war unfold than through the eyes of one who fought so hard to avoid it.

That’s all for this episode folks! Sound off in the comments below and we’ll be back on Thursday for the third episode of this batch before new ones on Friday!