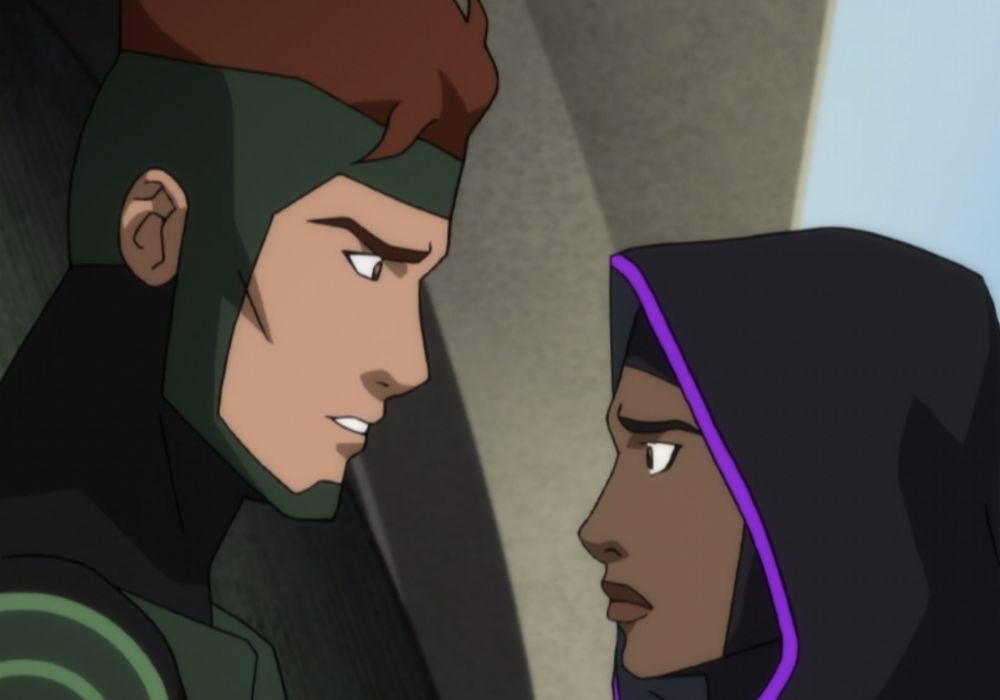 Today is the day…that I tell you at San Diego Comic-Con last weekend that Young Justice was renewed for a fourth season! Yes, yes we will be getting more of our renegade young heroes on the DC Universe app, even with the competing HBO Max coming from Warner Bros. Doom Patrol season two will even be on both services. SYNERGYYYYYYYYYYYY.

Anyway, you’re here for Young Justice: Outsiders‘ nineteenth episode “Elder Wisdom” where the Outsiders public nature causes problems for Lex Luthor and the League and invades the personal lives of some of the team members. As always, there will be spoilers from here on in, so do watch the episode! But with that let’s dive in!

So if the real world comparisons and features weren’t obvious to you in the first 18 episodes allow me to present to you “Elder Wisdom,” where Lex Luthor plays Donald Trump and fake news, conspiracies, and fascism are the players of the day and the word “Sad,” is uttered unironically. Yes, yes the hour has come.

So this week revolves around the Outsiders, the Team, and the League going to fiction Caribbean country ruled by a military dictator (where Lex has a hotel where they’re hosting a climate summit – something Trump wouldn’t do, the climate summit not the hosting government business at his resorts or hotels). The Outsiders show up to stop assassins hurting Luthor and other members of the UN, mainly Garth and Troia. Luthor uses this opportunity to call the League in to help and frame the Outsiders as out of touch kids and then the conflict splits to Outsiders vs. their parents and Lex vs. Godfrey.

It’s in the Godfrey interview that Lex goes full fascist, taking about reinstituting something like the House Un-American Activities Committee and metahuman registration. Godfrey throws him under the bus and the interview backfires, making Lex also look like a puppet (cue the Russia/Trump comparisons). Look it’s fine that this show wants to be grown up and play mature, but what’s the point of this other than being cheeky? Lex Luthor is evil so Trump is evil? We know that. Anyway it played very forced, which is an apt descriptor of this episode and the last.

The big subplot of the week revolved, again, around Violet. She gets her throat slit in grotesque fashion again during the mission at the beginning of the episode, but it’s ok cause she’s throwing herself into danger on purpose now. Ugh. I’m tired of Violet getting Kenny’d.

She’s giving everyone the cold shoulder, M’gann, Jace, and Brion, who decides this week he’s had enough. Violet confesses to kissing Harper, and Brion sweetly forgives her, which just makes her be the harshest we’ve seen her. Violet very sternly tells both Brion and Tara that she helped kill their parents. We learn that Gabrielle had been a servant in the palace and was paid off by Bedlam to let the assassins into the palace. This causes Brion to storm off, and Tara to almost have a panic attack. It will be interesting to see if Tara realizes connects the Light to Bedlam and realizes that they murdered her parents. She’d have to become a triple agent at that point.

Violet winds up writing a note at episode’s end and we cut to credit’s, and with how edgy this show is wanting to be, I have half a mind to think she might be writing a suicide note, but hopefully it’s just a “I’m running away letter.” I would maybe stop watching if it’s the former. Violet was one of my favorite new characters, but with the last couple weeks it just seems like the show writers are tanking her on purpose as fodder and seeing how miserable they can make her life.

In the world of teens who have more satisfying and emotionally fulfilling stories this week is Cassie, Bart, and Eduardo confronting their guardians about heroing. Part of Luthor’s plans with the public chastising of the Outsiders was to provoke outrage at home as well. And he does. Cassie’s mom, Eduardo’s dad, and Jay Garrick try to prevent their kids from doing more heroics, something they can’t stop Jaime, Static, or Gar from doing.

Somehow the line Cassie’s mom uses of her being fine with Wonder Girl when she was on a covert ops team, but now that she’s out in the open it’s not cool anymore seemed odd to me? Like I’m ok with my kid being a spy, but not a solider? Both are really dangerous. I don’t know. Jay’s seemed the most sincere, of trying to prevent more dead kids, and another Wally, but all of the Outsiders – in the preachiest way possible – get their parents to agree that they have to hero because no one else will. It was nice to see the adults, it again just felt hamfisted.

So Godfrey tricks Luthor into coming on the show and proving he has information wrong about the parents of the Outsiders (which he must’ve gotten from Slade, who got it from Tara, who was shaken up when she sent it over learning Violet helped kill her folks). Luthor confronts him in his dressing room and Godfrey says “We” had to teach him a lesson. We haven’t seen Godfrey be verbally evil and confirm his Apokaliptin status yet. We saw him end of season two on Apokalips, and we’re supposed to suspect something is up, but he has never confessed to his being a part of the Light and the whole network to anyone. Watching him be Putin and put Lex in his place was an interesting development, especially as it demotes Lex to more of a pawn in this universe, which he definitely isn’t in many others.

We also see more of Cassandra Savage, which is cool as that episode with the history of Vandal is still one of my favorites of this season (and probably the show). Watching her ask questions and wonder about her actions and the Light’s actions seem promising for her possible flip as well.

Alright so Batman’s underground League has officially also crossed into the morally grey realm, something that Wonder Woman is not overly comfortable with. Batman dons his Matthew “Matches” Malone disguise and M’gann impersonates an Irish girl so that Beast Boy can beat up some defunct robots to make Luthor look bad. Looks like the Light are not the only ones that are going to bend the Outsiders to their will for positive public opinion.

This again feels like the being in the weeds of the middle of last season, where things have to spin a bit before the next big shoe drops. But seeing Batman’s crew stand-in for all the hazy stuff that Dick, Artemis, and Kaldur got up to is cool. Especially for what it says about how the showrunners see these heroes, their fallibility, and the lengths they’ll go to.

Alright we’ll stop there. This is the last of what was originally a three episode drop, so hopefully next week’s episode starts with something other than the Outsiders winning Twitter likes. Sound off in the comments below and we’ll see you then!