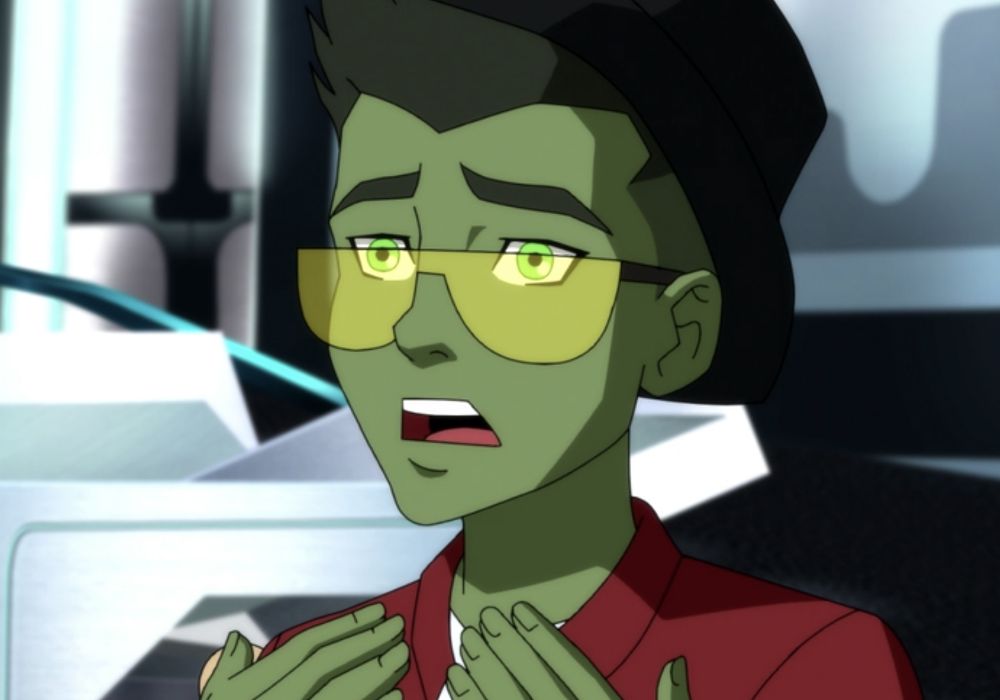 Round one has come to an end as the last of the first batch of Young Justice: Outsiders episodes closes out the situation in Markovia and sets the stage for what’s to come. This episode really does feel like the end of one of DC’s animated movies finishing a main plot and setting up smaller ones to be picked up. Or perhaps really, taken together, all the episodes are a regular hour of television. All in all, its a solid ending to this first batch of content after a six year hiatus.

This episode really feels like Greg Weisman and Brandon Vietti are giving us their vision and thesis for the rest of what is to come. This episode solidifies the more mature nature of this season, and also gives us the message of what we are to expect in the future. Just a heads up, as usual, I’ll be discussing full spoilers, but if you’re ok with that, let’s dive in!

I posited last episode that it would be fun to get more of these opening bits with Beast Boy pulling an ASPCA ad. This episode he’s on the DCU equivalent of Access Hollywood from Goode Studios (a stand-in for Warner Bros). He’s being interviewed by Courtney Whitmore (voiced by former DC All Access co-host Whitney Moore) on a viral show called Star Girl, which is funny cause Whitmore is Stargirl in the comics. He is so…grown up here. I feel like Beast Boy’s maturity level in the comics, especially as it pertains to some of his acting career-related moments, is very low. But here he talks about dating Queen Perdita of Vlatava and how they met at Wally’s funeral (Perdita being the girl who received the heart Wally ran across the U.S. in “Coldhearted.” He’s dressed like a young adult and holds himself with prose and confidence.

Then he drops a line that I just think is kind of brilliant. He calls himself one of the few “openly meta civilians” in the world. Vietti, who wrote this episode, links being “out,” like queer people are out or openly gay/bi/trans/queer/etc. to the concept of being a metahuman, and it makes a ton of sense. Of course most metahumans in the DCU hide behind masks and secret identities. But Gar doesn’t have to hide. They also are born with the gene and can’t do anything about it, just like queer people are born who they are. Using that language seemed to me appropriate, and also was handled with a lot of tact. I think this is something this season will be returning to, especially as they continue to focus on real-world issues. I thought it was a really playful link to make in a non-exploitative way, and am curious to see where it goes from here.

So Dr. Jace completes her work, and Brion gets metahuman abilities. It’s interesting that he also gets powers similar to the Plasmus creatures from these first few episodes. I hadn’t realized that perhaps the tarring activates the metagene and gives all the metahumans the same abilities. Of course Brion is called Geo-Force in the comics and has mastery over geological forces (just like his sister Tara who is still missing here. I wonder if we’ll get some ‘Judas Contract’ stuff mixed into this season).

Anyway Jace gets caught by Vertigo and Baron Bedlam and gets tortured. The Baron criticizes her for her “short-sighted morality.” Great line. Jace takes it all like a champ, ignores Dick’s help, and needs to tend to Brion. Then a fight ensues, The Light is mentioned for the first time this season, and all the people manage to escape. The weird cuts of the camera to Jace in this section as she’s holding Brion seem odd to me, and this show has taught me to lean into the oddities and question all the semi-amoral people. Jace transformed Brion, and ensured instability in Markovia. She’s definitely working for someone. She could also just be in love with Brion, which I think is probably not ok cause he’s supposed to be what like 17? One of those. Oh well.

I’m super happy that Prince Gregor is apparently a very intelligent young man. Prince Brion just marching back into the palace compound was probably not a good idea. It definitely could cause more national panic, but he does it anyway. Baron DeLamb brandishes his metahuman abilities and dukes it out with him and of course wins cause he’s had his powers longer. This isn’t really a thing I put together until Gregor calls his officers to arrest his regent and just points out all the plot holes in DeLamb’s story. It might’ve been convenient, or too “meta,” but I think it’s kind of cool to see the obvious plot holes snuffed out by characters in the episode. Clearly this season has bigger objectives than the politics of a small Eastern European country. Also Superboy boxing Bedlam was kind of dope, and not a fighting style I’ve ever seen Conner assume.

Even Brion still having to leave awhile makes a lot of sense here. Though that ambassador that tells Gregor to kick his brother out of the country responds rather quickly. Again, with the amount of reversals the villains have in this show, it’s good to be skeptical. I’m not entirely convinced, just like I am with Dr. Jace, that The Light didn’t want Gregor to run Markovia. While we may be leaving Markovia in these next few chunks, I have a feeling we’ll return.

So one of the Plasmus creatures violently “kills” Halo (or as Artemis calls her Halo-Girl). All this is done in service of Lightning getting his mojo back and going full, well, lightning on him. So for a minute I was really confused, and pissed, that this show had killed off one of its few female POC characters to further the arc of an adult male. But then it turned out Halo was still alive and apparently can’t die? So best of both world’s then right? She doesn’t get fridged, Lightning doesn’t get more guilt for not saving kids or little girls. I don’t know I’m still mulling it over. I am super glad Halo isn’t dead though, and I compliment the episode for giving me the fear (and anger) that she might be.

Alright so this is the thesis for this season loud and clear: We are the enemy. We, as in the royal we, the collective we, the regular people are the villains. We suck. We’re xenophobes and racists. We’re fearful simple creatures and we can’t help but be simple and fearful in the wake of the unknown. The regular people can’t be bigger than they are, and the heroes aren’t enough. Everything is soon to collapse.

That was vague, philosophical, cynical, and esoteric so let me dial in here. Lightning saves the Plasmus villain, and it turns out he’s the brother of the girl Jeff accidentally killed on Rann. After Lightning destroys the control device on his neck, he begins attacking Eck’s clones and Vertigo. There’s a Markovian farmer living nearby the fisticuffs and witnesses the whole brawl and so runs into his house to get his gun. As Vertigo escapes via boom tube, and the team congregates again to get their bearings, the farmer shoots and kills the kid. He’s proud of himself, he killed the monster. The battle was over. It didn’t need to happen. He’s the monster. We’re the monsters. Where do we go from here?

Not a happy beat to leave you with but the show returns tomorrow so hopefully things we’ll begin to look up. Sound off in the comments below and come back with us Saturday as we pick up with episode 4!