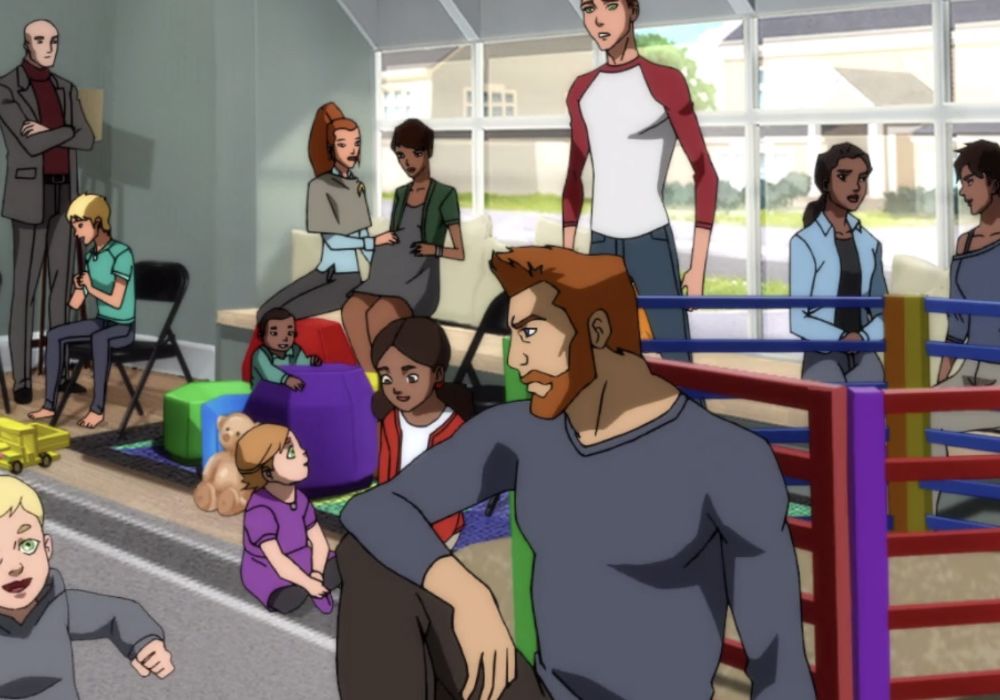 And we’re back with the last episode of round 3 of the Young Justice: Outsiders drop on DC Universe. The Light finally resurfaces again, in full, for the first time this season and things look to be heating up as we get ready to head into the last round of episodes until June. Full spoilers from here on in, but as The Light starts a scheming, another Fourth World character debuts, and Lobo returns, we got a lot to talk about. Let’s dive in!

So many children. So many super children. This is really the coolest and most fun part of this episode. I don’t love that this is splattered with darker aspects of the show that, for the first time, seem off putting. But still, so many hero kids have been born, conceived, or adopted over the course of the two year gap of this show. And that’s really fun. Barry and Iris have twins now with the Tornado Twins, Don and Dawn (still poorly named), and Iris is making sure Bart stops calling the baby dad (cause time travel antics). Mera and Arthur have had baby Archer (Archie?), which explains some more of Arthur’s passing the Aquaman mantle to Kaldur. Will (Red Arrow) comes over with Lian and chats with Black Lightning’s ex-wife Lynn whose brought their daughter Jennifer with her. Karen (Bumblebee) comes over, very pregnant, assumedly with Mal’s (Guardian) child, and Rocket meets her at the door with Amistad (her child with superhero Noble in the Milestone book “Icon”). Red Tornado wearing his John Smith disguise comes with his adopted daughter Traya, and I had no idea Tornado ever got married or had kids in the comics. Finally, this show brings Jonathan Kent into continuity as Lois joins the superhero Mother’s Day Out at the West-Allen’s in what is both of their first appearances in this show.

All in all, that took way too much Googling. Kidding. But it shows, once again, how many eras this show wants to grab from and how full and chronologically and continuity driven Young Justice is willing to be. This is a fascinating use of DC lore all piled and jam-packed into a quick 25 minutes. Who knew there were so many hero babies and kids.

More of Darkseid’s henchmen are rising to the fore. This episode we get G. Gordon Godfrey (who is still sadly not voiced by Tim Curry and its sad) take his clearly more sanctioned version of InfoWars to war with Gretchen Goode. Or, as Godfrey points out, the creator of the Goode Goggles that’ve been showing up, also goes by “Granny Goodness.” Oh my.

A few things here. 1) I miss Ed Asner. This Granny is far too sweet and subdued for any version of the evil Granny Goodness I’m used to. But I guess that means she was able to fool Bruce Wayne. Which leads me to 2) what the hell is Batman thinking working with Granny? Does he know? Are the heroes getting one-one-upped even after their plan last episode is laid bare and we know that the split is all an act? How far has The Light and Darkseid breached Earth? Which then gets me to 3) I joked about “Final Crisis” nonsense a few episodes ago, but I actually think that might be where we’re headed at this point. Granted it would be a far more modified version of that story. There’s no way an army of Supermen is gonna come in and fight Mandrakk and so forth. But still, what an ending to this season that would be.

Lobo is back and he’s…well he’s not good I guess he’s trying to kill Forager. Which, sidebar, Forager is frickin adorable and I loves him so much and if this show lays a single hand on his weird, alien body, I’m gonna be really sad. We saw Lobo back in the first episode of season 2, and if I remember he was underutilized and it seemed like Babs and Wonder Girl could kind of take him. Here he takes down Dick’s entire squad, after a hefty fight, and thinks he’s killed Forager and scrams. Still, we do get a far more realized Lobo than his appearance early last season. He has all his catchphrases calling people “bastiches” and says he’s gonna “frag all ya.” So yeah they get him right here, and he’s far more deadly, bloody, and more formidable than his last appearance. I like that there’s room for him to exist in this universe, he’s not redeemable, he’s in it for the money. While that’s not really a version of Lobo we’ve seen much in the comics recently, I’m sure this lawless, amoral, mercenary exists somewhere in some form.

Speaking of Lobo showing up: he kills Halo again and it’s…kinda gross. He shoots her through the stomach with his chain gun thing and blood splays and she faints and then heals herself again, but I’m really getting tired of this show abusing this character in every fight she gets into. Like I get that she can heal herself, she’s still learning, and that she can heal herself. But how come we aren’t seeing Brion or Forager or other newer characters also getting hurt in any sort of considerable way? Halo has been burnt to a crisp, had her neck snapped, and now has been pierced straight through the stomach. This is not a good look for one of the few front-and-center brown, female characters on this show, and not something I want to see continued. A few people on Twitter made jokes comparing her to Kenny on South Park, accept this is neither funny or necessary. Clearly she can heal herself, she can also heal other people, let the men start getting hurt for a change. Do better.

5. The Light gets brighter

Finally, this episode is bookended by The Light meeting in Bialya. This is for two reasons. One, they put the contract out on Forager so as to get confirmation that Nightwing has a new team, knowing that teams of young heroes have been problems for them in the past. Second, they send Lady Shiva, who we as the audience learn is running the League of Shadows, to kill Ocean Master who is gonna murder all of the hero’s families. Apparently somewhere in the last seven years, Orm broke bad (which he hadn’t yet in “Downtime”), and wants all the heroes to pay. Shiva calls his plan The Light’s “nuclear option,” which they’d only execute if absolutely necessary. Glad there’s still a code I guess, although it’s very chilling the villains very clearly know all the secret identities. Shiva does what any assassin with sense would do, she Alice in Wonderland, French Revolutions him and his head lands on the floor. This, combined with the Halo stuff, was the first time I’ve thought “Maybe this ‘maturity’ thing has gone too far” and questioned the mission, goal, continuation of the DC Universe shows if they’re all gonna be ultra-violent messes.

It’s clear though that The Light, now consisting of Vandal Savage, Queen Bee, Klarion, Ultra-Humanite (replacing the Brain), Deathstroke (replacing Black Manta), Lex Luthor, and Shiva (replacing Ra’s) are a little rattled. Things are starting to be a little more unpredictable, Dick having a team is an unaccounted for phenomena. But, lo and behold, Granny is here to save the day. The intrigue gets deeper, the chess game is continuing, and the midseason finale is on the horizon.

That’s it for this round folks. We’ll be back on Saturday for the beginning of round 4, this time with four episodes instead of three as we prepare for the five month hiatus. Sound off in the comments below and we’ll see you then.