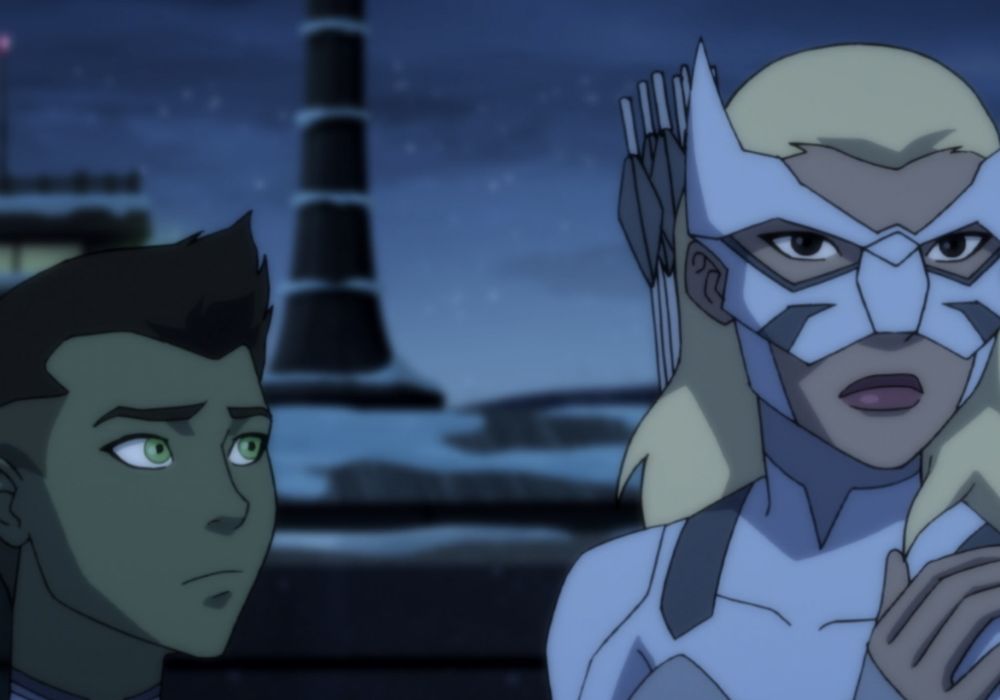 Today’s the day! Quite literally. As I write this, Americans around the world are getting ready for brats, beer, and barbecue, and some tanks to roll down Constitution Ave in Washington, D.C. You’ll be reading this as the sounds of fireworks are long gone and a ton more Carbon dioxide is pumped into the atmosphere. What a world we live in.

Anyway, you’re here for Young Justice: Outsiders coverage, presumably, unless you clicked by accident. So let’s give the people what they want! Today we have “Leverage,” the middle installment of the three episode drop that kicked off part two of this season. We have more DCU mainstays, more Russia, more love, more violence, more comfort, more commentary, more a lot of things. A lot happens in this episode, which very much overcompensates for almost nothing happening in the last one. Of course we’ll be discussing the episode in depth, so spoilers from here on out. Today’s the day, so let’s dive in!

So after last episode half reset the playing field and half reintroduced us to a good number of the characters and their conflicts, this episode…introduces a ton of new characters. That and really centers in on Artemis, Violet, and Gar, who really seem like they’ll be driving a lot of the action going forward. This episode both manages to introduce two new teams, which we’ll talk about, and highlight Beast Boy’s continued anger, Violet’s coming into her own (though she also is the only one who gets violently hurt, again, come on), and Artemis’ starting to move on with her life. We don’t get Dick or Jefferson or Conner at all here, though we do spend some time in Taos with the metahumans who are living there. This season has been good about having these side moments in this larger world like with the Zatanna/Dr/ Fate meeting, and the playdate in “Home Fires.” I have no idea how they are going to wrap three seasons worth of conflict up in 11 episodes unless they pick up the pace a little bit, however. I’m still really enjoying the ride, and hoping for that season 4 announcement soon. I don’t care if this show stays on DC Universe or moves to Warner Brothers’ rumored streaming service, I just want more of this and less of Titans. But the fans of this show know a lot about getting screwed, so not holding my breath, especially after the Swamp Thing fiasco. Anyway, all that being said, this was a fantastic episode, a slow mover of the larger plot, but giving us more world-building and some great emotional beats.

2. From Russia in Red

Alright so the main thrust of this episode is a new Gamma Squad from the Team, consisting of Artemis at the helm, Beast Boy, Geo-Force, Forager, Halo, and Tara, heading to Russia to investigate what seems like a Russian metahuman trafficking rink. They go, they scope it out, turns out Russia’s just building Iron Men, and we get an introduction to the Earth-16 version of the Rocket Red Brigade. There have been a handful of different Rocket Reds that have appeared around the DCU since they were created by Steve Englehart and Joe Staton in the late 80’s. They weren’t characters I was really familiar with, the last appearance by one of them in the short-lived New 52 run of “Justice League International.” One of them appeared in Justice League: Unlimited though which Wikipedia reminded me of. Thanks Internet *grimacing emoji*.

Anyway, as this season has made its social concerns and commentary more explicit, Russia was bound to show up. It’s cool to see them raiding the cabinet for all the toys, especially as obscure as this. Come to think of it, I guess the DCU doesn’t have a lot of Russian hero/villain stuff going on? Minus, as Aquaman states trying to calm down Geo-Force, that the former Soviet Union once occupied Markovia. I don’t think Rocket Red has been in “Doomsday Clock,” but I could be wrong. Anyway, the bigness of this Earth just continues. The armor the Rocket Reds are using look like the more sleeker Iron Man armor from Brian Bendis and David Marquez’s run on the character, and the bonding of the armor to Dmitri was extremely gross. All in all, great introduction, will we see them again? Who knows.

Right those are not the lyrics from “Heathens” on the Academy Award winning (lol) movie Suicide Squad. Those are from an Imagine Dragons song called “Monster” from when the Infinity Blade mobile games on the App Store were still a thing. Getting my “edgy, I’m trash” songs confused with one another.

Anyway, I bring up those lyrics, because it describes the side story in Taos rather well. The Dorado’s are still running the STAR Labs Metahuman sanctuary in Taos, which is where Miss Martian is doing counseling work during the episode for new guests. Those include Livewire and Mist who were last seen helping Cheshire back in “Triptych” and a new person, Wendy Jones, Windfall. Looking her up (cause what’s the Internet for if not googling obscure superhero characters), she was formerly apart of the Outsiders, later the Suicide Squad, and hasn’t been around in awhile. She’s the heart of the episode though. This sanctuary parallels the hub of Granny’s activity from last episode. As metahumans across the galaxy are forced to fight, these ones are trying to heal, and it’s not always going super well. Wendy, Windfall, has a traumatic experience where she almost kills three people, and then decides to wear the inhibitor collar for her own protection. It’s so…sad, and serves as the emotional backbone of the episode. As we get feelings of affection, feelings of guilt, we also get experiences of trauma. It really balances the episode, and allows the world-building to have emotional stakes. There are new super teams forming, and there is so much anxiety on this Earth because of metahumans, which is manifesting itself in metas themselves.

It was only a matter of time until they showed up. Yes the Suicide Squad has made an appearance, which still really only leaves the Green Lantern Corps as the biggest untapped DC property this show has not touched. Black Manta, Captain Boomerang, Monsieur Mallah (who is not the gorilla who is a part of The Light now, that would be Ultra-Humanite, which I only point out because I spent most of the episode confused), are all tasked by Task Force X to take down the Russians. The Team’s mission was almost “recon only,” if not for the villains showing up. There’s a reference made to Rick Flagg, and Waller shows up and spills everything to Kaldur, who dubs the group some kind of Suicide Squad. Waller just spills all the beans to Kaldur, but she can because the League is under so much fire already worldwide that they can’t say anything about it. Well played Amanda. I have no doubt we’ll see more of this group, especially as Manta is leading it, and he still has a score to settle with his son and Artemis. Oh how the mighty have fallen. Seriously though, let’s count how many super teams there are now: The Team, The League (in space and on Earth), Tim’s “Gotham Knights,” Batman Inc., all the metas at Taos, the Suicide Squad, the Light, the Rocket Red Brigade, and probably more? We dropped Dick’s Outsiders, unless they come back, but still that’s a lot going on. Where are we heading?

So the emotions were interspersed all episode with the big action and world-building. The best and cutest had to be Artemis and Will’s passing glances at each other as they take care of Lian. They’ve been living together for awhile now and settled into a routine and it was bound to happen. Though Artemis is Lian’s aunt, Cheshire’s still kind of around, and Artemis still has a framed photo of her and Wally by her bed so this may not end well. I hope it does though, it’s been brewing in the background, Will has matured so much, and they both deserve to be happy. Love is in the air.

Love may be on the way out, however, since we now know Halo’s realized she let the assassins who killed Brion’s parents into the Markovian palace. This makes less sense to me, because why would they need to pay her to steal things to let them in? And how’d she break in? Anyway, there’s a lot of guilt coming.

Beast Boy is the other emotional hot spot, as the anger just keeps building and building from being so close to Granny Goodness. Of course she made them do 52 takes. Of course. He’s gonna need a valve soon to let that all out…

All in all, this was a great episode, dropped a ton of content and inched us ever closer to where we’re going. Only one more episode to go in this block, and I’ll be back Monday with my thoughts for you. Sound off in the comments and we’ll see you then!