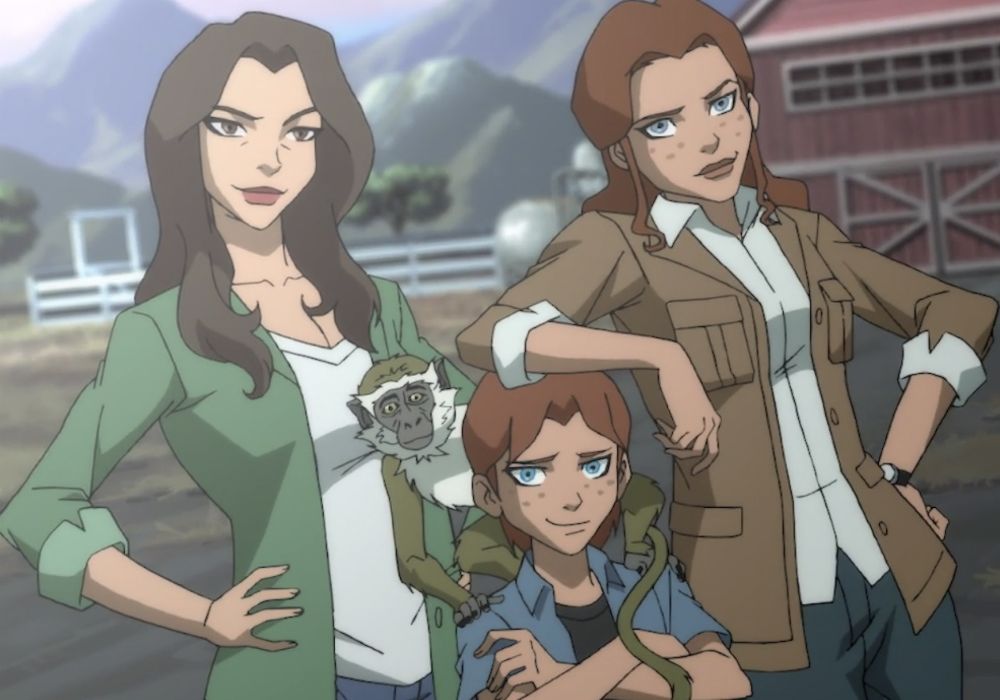 It’s the penultimate episode of the first half of Young Justice: Outsiders and it’s all about Beast Boy! After appearing in brief scenes before the title credits in the beginning of the season, Gar gets a whole episode, and it’s…quite sad. We also pick up on the same day as last episode and explore the fallout of day 1 of school for Forager and Violet. Fair warning, from here on out there be spoilers. But with that out of the way, let’s dive in!

We begin the episode with Gar on the set of his Star Trek spoof show in the middle of an away mission as one of his friends die. We then cut to the set and get a bigger picture look into Gar’s life, and how it’s changed in the last two years. We met Gar first back in season one in “Image” when the Team ends up stranded in Qurac and meet Marie Logan, who M’gann modeled her life after and her career on the show Hello Megan. He almost ends up dying in the episode and gets a blood transfusion from M’gann, so that when he shows up again for the first time in season two, and is green, we think it’s because of that. He appears in season 2 to be on the cusp of being a teenager/barely out of being a preteen. Those sideburns are really not doing it for him.

Here, he’s a more confident teenager, he’s dating Perdita, he is the star of a successful show, and he’s reunited Tom Bender who played Conner on Hello Megan with his mother. They’re filming in Burbank, which is a fun nod to where the DC Entertainment and Warner Bros offices are. The show’s doing great, Goode Studios loves it, and Gretchen Goode (Granny Goodness) has a hand in everything happening. Except we learn that things aren’t as good as we think they are. Gar is stuck with a step-father who doesn’t care about him in Steve Dayton, the former Doom Patrol member Mento, and we learn that he had gone to live with Mento and Elasti-Girl, Rita Farr, who was a co-star with his mom. Mento and Gar hate each other, and Mento doesn’t care what he does, which I guess has led him to be spending so much time with Perdita, since it seems like he hasn’t been spending time with M’gann. It was clear from the beginning we were getting a Gar episode, and I wasn’t sure why. But as it went on, as this universe’s Doom Patrol was introduced, as Gar got folded back into the fold, it was clear this was going to be an integral and important one-off chapter, perhaps unlike last episode.

Speaking of the last episode, we are still in the same day: October 15th. Violet and Forager are home from school, and it’s clear that Violet’s brought a friend in Vic Stone. No one knows what’s going on, or why it was Violet that ended up rescuing him, but we get more info as we go on, namely, that Violet is a walking Mother Box. It’s clever how the dots are connected here, hiding in plain sight in ways we should have seen coming. Superboy saw a destroyed Mother Box in Bedlamb’s lab in Markovia, Artemis met Violet first when she was dead, and Dr. Fate says she has an old soul living inside of her. They finally connect the dots when they realize that Violet opened a boom tube, and that the Mother Box had been infused in Gabrielle’s body and that Violet truly was a different being. Everyone’s happy they’ve figured the mystery out until Sphere and Cyborg are about to duke it out cause Cyborg has an evil Father Box inside of him rather than a Mother Box.

I’ve been a little lukewarm on introducing Cyborg via his New 52 origin since I feel like we’ve seen it a lot recently, but I hadn’t realized how significant the Father Box twist might be until this. Father Box’s are evil and Apokaliptian. I also don’t know that they appear with as much regularity in the comic DCU. But having two entities, emblematic of both, will probably help the Earthlings fight Darkseid, yada yada yada. It’ll be interesting then to see how they use Cyborg and Violet together going forward as we continue to mash comic book runs together.

Alright so Gar and Perdita are about to go clubbing in Hollywood, and while waiting for her to finish getting ready, Gar puts on her Goode Goggles. He’s playing a game, and then is injected with some kind of mind control device type thing and overwritten to be driven to go to Encino. He ends up being overwritten, but manages to make himself unconscious to avoid being taken to whatever was happening in Encino. It took me a couple guesses to wonder what exactly was happening here. Were the goggles meant to be worn by Perdita so that she would be brainwashed to go to Encino? Or, do all the Goode Goggles do this very thing every time a different user wears them? I think the latter, and it’s probably the way Granny has been capturing people with the metagene. Perhaps users that are identified as metagene-positive are brainwashed into heading to trafficking sites. These are brain-washy devices, and so the “Final Crisis” influences continue.

Either way, the entire experience is traumatic, dark, and intense for Gar. He first begins seeing himself on the set of Space Trek 3016 with all the members of the Team that have died since Gar has been in their orbit: Ted Kord (mentioned in “Intervention”), Jason Todd, Tula (who died in the Young Justice: Legacy video game), and Wally who died in “Endgame.” They get picked off one by one and Gar has to watch Wally die again before the entire animation style shifts to that of Teen Titans Go. Gar appears like he does in that show, and sounds like he does too, which made me realize the voice actor for Gar changed from seasons 1 and 2 to this season. Gar was voiced in this episode by Greg Cipes who voices him in Teen Titans Go!

This was the coolest, and most heartbreaking part of the episode. The voice actors from Teen Titans Go! take on adjacent people in the Doom Patrol: Chief, Robot-Man, Negative Woman, and Elasti-Girl, Rita Far, who is Gar’s godmother/step-mom. They apparently were a team in this universe, which is just another added continuity bit, but they go off on a mission and die leaving Gar alone. These mirror the events of “Doom Patrol” #121, which is later retold by Gar in “Tales of the New Teen Titans” #3. The entire Doom Patrol die except Mento, who is exploiting Gar for money if the cartoon, fever dream is to be believed. He goes to live with M’gann briefly, but Mento takes him away. He’s just tired of all the death, especially as he has to relive his mother’s car crash again. It’s so sad. I hadn’t realized how much death and destruction Gar had seen in this continuity until this episode, how much pain he’s hiding, but gee. No wonder he tried to bail on the Team. All that being said though, the animation style changing and the way this all unfolds is super inventive, and honestly probably couldn’t have been done had this show not been on DC Universe, so plug that one in the maturity win column.

Alright so a few things happen here at the end of the episode. 1) In the midst of his “psychic fugue state” as M’gann is trying to come and rescue him, some “monkey god” claims that he’d been inside Gar the whole time, even before he got the Martian blood transplant. Does this mean that Gar’s powers are based on more than just that and tied to something deeper? Does that matter? 2) Gar realizes that Gretchen Goode is totally evil, thus furthering exploring the extent to which Apokalips has invaded Earth. How will this affect things going forward? Will they confront her and will it go poorly? Or well? Is this ship going down or ramping up? 3) Finally, how will Gar and Perdita’s relationship, Conner and M’gann’s, and now the newly minted Brion and Violet’s change things going forward? Death was on the table when this show was on Cartoon Network. Things could be much worse.

All in all, this was a recovery from last episode, and sets up some possible big confrontations moving into the midseason finale. Sound off in the comments, and check back in with us on Saturday when we close this puppy out!