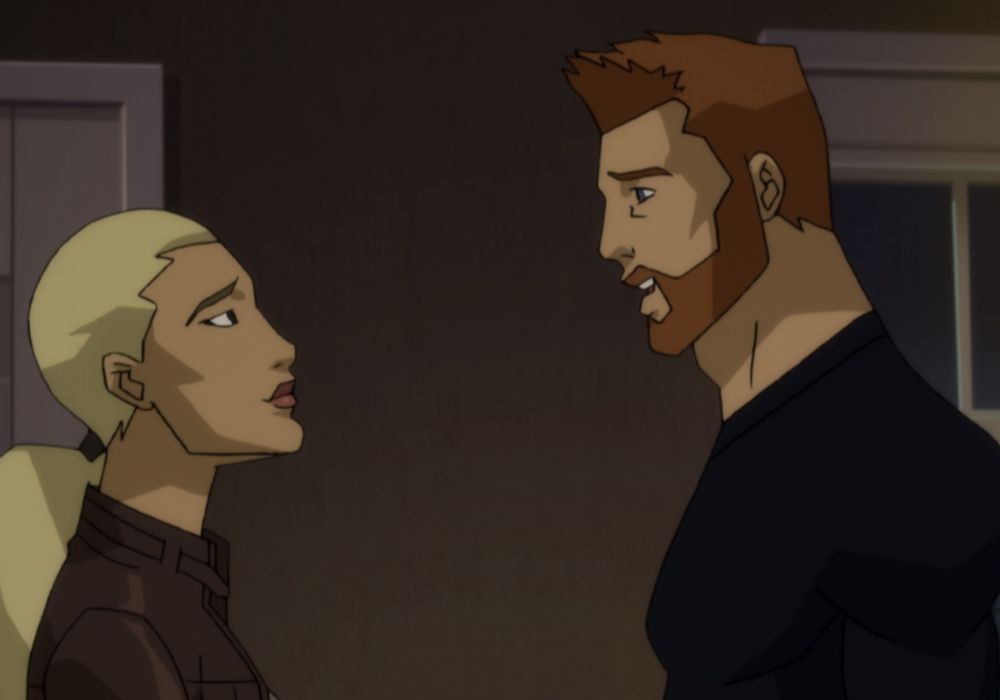 “You’re overwhelmed. Freeze was underwhelmed. Why isn’t anyone ever just whelmed?”

Today is the day I tell you that…man is this episode an emotional gut punch. Whew. I was blubbering about the same amount I did when the grandma died in Moana. Oh I guess spoilers for that movie too… You can catch it on Disney+ in two months as our corporate storytelling overlords start to consolidate narrative until the moment Disney will own the rights to every story ever and start signing contracts in hospital delivery rooms. Anyway this world’s a flaming hellscape, but this episode’s good.

Only one more episode left of Young Justice: Outsiders, this installment being the penultimate episode, and the middle portion of the three episode drop. This episode has a lot of leg work to do to set up a finale as it tries to weave all the threads of this season together to set up what is seeming to be a much smaller and more intimate final episode. Of course spoilers from here on out, though I highly suspect everyone (but me) has watched all three episodes by now since they’ve been out a few days. But with that, let’s dive in!

This episode opens once again in vignette just like “Quiet Conversations” a few episodes prior. I guess having Metron show up in an episode will do that to you. We pick up a few weeks after last episode on Valentine’s Day and get news of the Justice League returning with over 300 metahumans from space. The metahuman facility in Taos is filling up. Things seem, well, quieter.

There are four plots going on this episode, with Artemis’s taking the most time. Violet, Cyborg, and Beast Boy are watching Lian, the Markovs are family reunioning, Superboy tries to find Forager a new home, and lastly Artemis and Will finally confront the feelings they have for each other that seem to have been bubbling the last 24 episodes. Will sets out a nice, surprise dinner for the two of them and they share a moment before the whole thing shatters and Artemis runs off crying to her room apologizing to her picture of her and Wally. All of it from that moment to her wanting Zatanna to bring him back to life (mentioning “Secret” no less), to the then visceral encounter she has with Wally in “limbo” is just brilliant and powerful and important. We’ve known Artemis has been grieving, but we haven’t seen her grieve. We really haven’t seen any of the original Team who are left drive the pathos of the season. Sure they’ve been around, but are new friends have been in the forefront for the most part. And while M’gann and Superboy got engaged way way back at the beginning of the season, their rocky relationship stuff the last couple episodes has really been set outside. I love that we are getting this emotional closure, and as I’ve said time and time again, when this show’s on, it’s on fire. And what Wally and Artemis get here is nothing less than spectacular, and being able to have it and also so many other stories with similar weight is great.

Now whether or not this episode should’ve taken place 13 episodes ago is a whole another question about pacing that I’ve pointed out, and will probably have much more to say about in a few days. But right now this episode was powerful and is definitely in the top 3 of the season, if not at the very front for me.

2. Geranium City – A lesson in privilege

Did you forget that Superboy was a genomorph clone and there used to a city of genomorph clones? Gosh I sure did. That seems like eons ago that any of those threads were important or mentioned, but to pull that card back out, and to do it in a way that adds to Forager’s journey, and builds on these questions of “being out” and “passing” that have been in the undercurrent of this whole season was weaved in really, really well.

Superboy, like Artemis, is another of the original folks who hasn’t much to do on the latter half of this season. Forager too. And for their narratives to collide again, with the ongoing bit about Superboy “gathering strays” I think really works. Superboy takes Forager to Geranium City where all the genomorphs live, and gives him a tour, and introduces them all by name as some of his oldest and closest friends. It’s honestly lovely and adorable. Though it is a set aside and safe place for them, they also live in hiding, using their telepathy to disguise themselves as humans for protection. They aren’t free to be wholly and freely who they are, though they are more free, and more secure, than they were.

Superboy brings Forager here as a compromise option for him to stay on Earth if he wants, but Forager rejects that option, opting to be openly Forager and to cast off his Fred Bugg persona. This pleases Dubbilex, but it also prompts him to chastise Superboy for not doing enough, and not claiming to the wider world that he is a genomorph. Superboy can pass. He looks human, and has the privilege and honor and respect of the House of El insignia behind him. He doesn’t have to be “out” because of his ability to appear in the majority, unlike Beast Boy has to wear his meta-ness like a badge of honor because there’s no other way to be or appear. It’s powerful, and while Superboy doesn’t decide anything, I’m sure this sets up ideas for the next season. While this show has struggled with the real-world political comparisons (having Lex Luthor make an awful, “There’s good people on both sides,” at episode’s end, it has done well with its queer content this season. Young Justice once again calls us to examine our own privilege and ask, like the philosophy book title The Good Place has made famous, “To what do we owe each other?”

Metron slides into this episode in brief, boomtubing Violet and Cyborg away to somewhere Unknown. The location description even says “Unknown,” for where they go. It seems like some kind of New God, Source, something, something, but it gives Lian a laugh, and time for Metron to monologue. Also Violet and Cyborg are speaking in the languge of Mother and Father Boxes, which is a neat device.

We learn that the Mother and Father Boxes are the grandchildren of Metron. I’m sure that’s straight from the comics that Metron is the inventor of the Boxes and all the boom tube tech, but I honestly haven’t worked my way through the Fourth World Saga. So if anyone knows for sure, show off in the comments. Anyway, Metron says he’s proud of the two, and that they’ll be useful in the coming galactic conflict. Seeing as how there’s only one episode left, I take it Earth’s going to war with Apokalips next season and Violet and Vic have a role to play. I’m all in for more Fourth World, and I’m ready for the war I thought was coming sooner.

Alright so back to Artemis and Wally. Gosh it’s just so great. All of it is great. Artemis meets Wally in limbo and gets to live part of they life they had planned together. They get married, they have a baby, they both get Ph.D.s and are teaching at a university. She gets her closure, and it doesn’t backfire in the way that Zatanna warned her that it might. She gets to imagine a life with him, they get to tell each other how much they love each other, and he tells her that she needs to move on because she deserves to move on. It’s just such a poignant portrait of grief. Artemis has been sitting all season in between the desire to move on and the grief that if she does she’s losing Wally, but that’s not how it works. The memories will always be there. They get to say the goodbye they didn’t in “Endgame,” after Artemis had spent months undercover for Nightwing and Aqualad, and she comes back to Will saying definitively that she’s ready to be with people but that they’re family and friends. Which is perfect and honestly sort of mature and powerful for this show to approve and applaud their relationship.

What we also learn, which I’m sure won’t backfire, is that in an “Identity Crisis”-inspired move Zatanna and M’gann created the “playground” for her to experience everything that happened with Wally. It wasn’t actually limbo, it wasn’t actually Wally, they just gave her mind the tools it needed to work through it all. It’s an ethical gray area that I imagine will cause quite the stir down the road, but for now led to what might’ve been the character and emotional highlight of the season. This and Dick’s fever dream helped solidify for me that Wally is going to stay dead. Or should stay dead. Everyone’s grieved, let him be dead. Dang “this part” was good.

Alright so we’re treated to more of The Light pulling the strings. We knew this was coming. Vandal sent the Outsiders to ransack Granny’s Orphanage so they must’ve had a plan to combat Darkseid or further their nefarious agenda. And they do, and it involves Markovia. King Gregor, Brion, and Tara meet up for the first time since Tara’s been alive and get the family back together and try to figure a way to get them back to their home country. All this is going on while The Light sends Vertigo to break Baron Bedlamb out of prison so he can stage a coup and place himself as ruler of Markovia. Of course they only know to do this because of Tara’s duplicitous intel.

All this sets up a final showdown in Markovia – Outsiders versus Bedlamb – and brings the entire season full circle. I think it’s cool that everything is coming back together in a bow like this, but my main question is why? Why make this the finale? What is Markovia to The Light? What is Markovia to Darkseid? Is it important to either of them? Are The Light and Darkseid going to war? What the heck is going on? Why don’t I know? Did I forget to turn the oven off?

All this and more when we return in a few episodes for the finale. Sound off in the comments below and we’ll see you then! 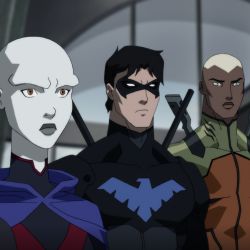 Today is the day, I tell you there is only one more week of Young Justice: Outsiders after this (though you’re getting three episodes next week). As someone in some high-budget, CGI-filled, superhero movie might say, “We’re in the endgame now.” And, in whatever fictional universe such a comment exists, they’d let him say it, […]