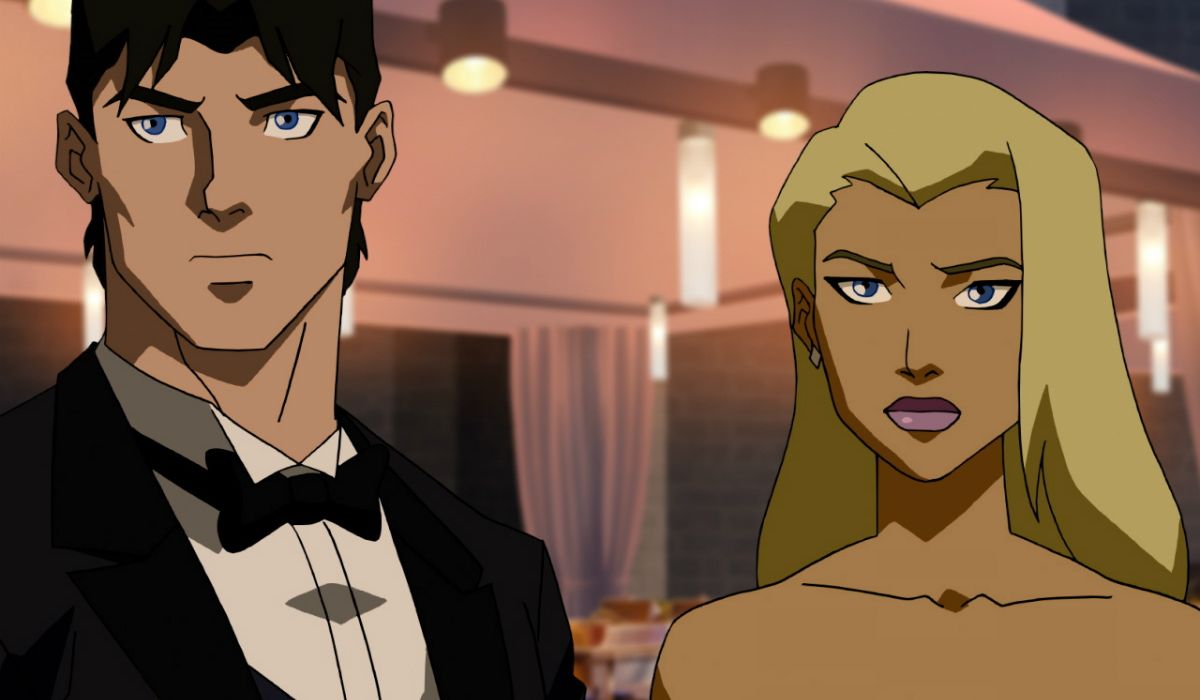 Round two of the first block of Young Justice: Outsiders episodes is all about Markovia. Dick and his squad infiltrate the country to try to take down a metahuman testing and trafficking facility and as you can imagine from the first part of this sentence: hijinks ensue. This episode is all action and infiltration, following the smaller plot from the first episode and aligning the pieces for the third episode to knock em down.

It’ll be interesting as we go forward to see if these blocks of episodes act as fuller stories all together rather than individual pieces. But right now you’re here for my pithy quips and whelming thoughts, dear reader. So with that, let’s dive in!

1. Middle of the crossover

So just like with the previous episode, I’ve only watched up to this point at the time of writing this piece as I’m trying to evaluate each episode individually. The first episode set up a TON of stuff, gave the fans a bunch of crowdpleasers and introduced the big galactic conflict for the season. Markovia was more of an afterthought, or at least an adjacent thought, and, in my opinion, was necessary but still less cool than the other things happening. This episode though is all about Markovia as Dick’s squad infiltrates the country and Prince Markov wakes up to the fact that there’s evil afoot in his small nation. With that, it has all the aspects of the transitional, middle of the arc/crossover comic tropes. It’s the middle of the action movie where people are punching and you’re waiting for the next interesting plot point to drop. It’s all action designed to get you from point A to point B. There’s nothing inherently wrong with that, and there’s still fun things happening here. That fact just feels very apparent to me. Again, I am very curious about how releasing all these episodes in 3-4 episode chunks will affect how each episode holds up on its own. Will all the middle episodes be designed this way?

2. “In the arms of an angel”/United Nations cameos

If you ever wanted to see Beast Boy be Sarah McLachlan, congratulations here’s your fix. The opener to this episode is great with Beast Boy as his rip-off Star Trek character telling you why you need to care about missing metahumans in true sad animal fashion. Super appropriate the guy who can morph into animals gets to play the Canadian, tear-inducing, ASPCA figurehead. I hadn’t noticed that Gar wasn’t really in episode one until this bit called attention to it, and its cool that he’s going through his actor phase now and the show is going to acknowledge that fun comic book tidbit.

Also, in cool cameo opener moments, Atlantis and Themyscira both have UN seats. Guess who their ambassadors are? Garth and Donna Troy kiddos! The world is growing and its great. I love/hate that Luthor has the UN at his grips, but if we get some fun talking head politic moments here, well, I like The West Wing so I’m not going to complain. Also Donna has the best line of the episode and having her tell the Bialyan rep to piss off was hilarious. I imagine there will be so many more of these types of things as we go forward.

Also, bonus thought that’s opener-related, the title sequence for this show is dope. It’s creepy, not bombastic, and sets the darker tone this show is going for. So kuddos to those people.

So Dick and Artemis go by plane and Jeff and Connor go by Supercycle and all end up in Markovia as things plunge farther into hell. Jeff and Connor infiltrate the corrupt children’s hospital where Dr. Simon Ecks is killing kids, and Dick and Artemis dress fancy to the pre-coronation gala of the future king of Markovia. They get separated and Artemis ends up back in the cemetery that SB and Lightning dropped hers and Dick’s gear off at. Here she meets this show’s version of Halo, one of the children being buried in a mass grave of dead kids who were experimented on. Spoiler she’s not dead. Told ya this show was dark.

We met Halo briefly last episode as she tried to steal from the Markovian palace, assumedly, to pay for food and was taken and tortured. In this version she’s a Quraci refugee and with that is portrayed as a young teen of Middle Eastern descent. In the comics she’s a white woman and was one of the original Outsiders created by Mike Barr and Jim Aparo, whose run this show is going to be borrowing liberally from. Can’t wait for the #comic$&ate people to go nuts, but I think it’s a great move. It both plays into our, real world, current political climate and treatment of refugees, and opens up different story possibilities as it seems this show is headed for worldwide instability. It’ll be cool to see her character grow and evolve alongside Prince Markov’s as they were both front and center in the posters and marketing for the season.

Dick’s team is tricked out with some of the fanciest gear that this show has portrayed thus far. The smart phone type objects that Lightning and Superboy use to break into the children’s hospital are really cool. The eye contacts that Dick and everyone are using to communicate and coordinate, also super cool, especially as Dick’s seems to have Oracle operating in the background without the knowledge of the rest of the team. The gleeful, nerd moment I had though was when Jeff and Connor fired some camera disrupter things in the hospital’s secret room, and their faces looked like the Hypnos faces that Spyral uses in the comics. Great nods, great gadgets, great usage. It all lends itself to the aura that Dick has been covert and is learning the spy game as opposed to playing hero out in the open. It showcases a different side of heroing that this show has yet to explore, but seems to be leaning hard into.

5. Darker villains in the depths of Markovia

Alright so we learn that, seemingly, Count Vertigo is behind Bedlam, the organization that is trafficking metahumans in Markovia. A member of Dick’s team says it like three times, so it must be true. Unless…

Anyway, this is a darker Vertigo than showed up in the first two seasons of this show as an antagonist, first as a member of the Injustice League, then in the episode Wally runs a heart transplant for his niece across the continental U.S. Well I guess he tried to commit regicide so maybe he was very bad before…I don’t know. Anyway, he has some of the same henchman from that episode. The guy he calls Henchy is the doctor who turns Wally away at the hospital door. It’s, again, cool to see the callbacks, and makes perfect sense that Count Vertigo, the evil Vlatavan, would be doing evil things in neighboring Markovia. I have no idea who Vertigo is working for, be it The Light (who have yet to be mentioned), or other Markovians, or what. But he manages to get the jump on Superboy and Lightning, and get Prince Markov in his clutches to undergo some tort…I mean metagene activation. Things are about to get dicey.

That’s all for this middle episode of the first block of Young Justice: Outsiders! We’ll be back Thursday as I dazzle you with how Prince Markov and Superboy escape. I’ll let you know when I know. Sound off in the comments below and we’ll see you then!