Disclaimer: I am not an expert in either science or World War II history; all of the information I will be using in this column is either easily found on the internet or is purely my opinion.

This month, we discuss drawing twins with Nick Pitarra, and get the final version of a piece of art we teased on Multiversity earlier this month. 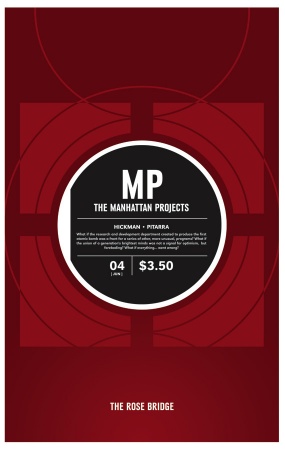 This month’s issue is all about travel; across galaxies, across dimensions, and across life and death.

The Golden Key, Part 1
“Clavis Aurea: the Recorded Feynman” is excerpted three times per issue. The Golden Key (the English translation of the book’s title) deals with those quotes. This month, all three quotes are from Albert Einstein.

“A human being is part of the whole, called by us ‘universe,’ a part limited in time and space.”

In this issue, the most complete version of the universe is shown to us thus far, from alien lifeforms, to artificial intelligence, to alternate dimension versions of ourselves, to sea life. If the universe is, indeed, ‘the whole,’ then each technological, evolutionary and accidental creation constantly changes what ‘the whole’ is. That also means that every death alters what the universe is; and in that way, the Manhattan Projects has changed the universe, perhaps, more than any other group of men in history.

The Land of Enchantment 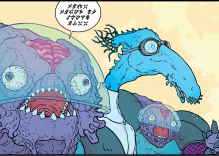 The issue opens with a trip to New Mexico for Groves, Oppenheimer, and some foreign military leaders, including Sergei Korolev, who would go on to be one of the most important figures in the Russian space program (more on him later), to meet an envoy of aliens. This group of aliens has met every ten years in the same New Mexican spot with human emissaries, and we are privy to this decade’s meeting.

Except that these aren’t the aliens we’re looking for; the typical sci-fi aliens are described (grey, large eyes, bulbous heads), are not who shows up. Instead, we get a distant cousin to Larfleeze and some multi-armed, giant brained companions. They have destroyed the Aoulo society made up of those grey fellas, and are promising humans access to “the stars” in exchange for an untold ransom. What is that ransom? More on that later, as well.

The Players
We get some new people showing up this month, as well as some familiar faces (very familiar, in fact). 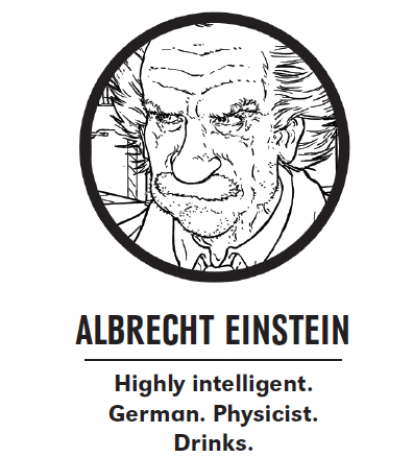 Einstein – Einstein’s story reflects Oppenheimer’s quite a bit this month, with an “evil” version of Einstein being the current resident of Earth. We have seen this Al choke a buddhist, drink heavily, and stare at a monolith. We’re given a little more insight into exactly why he did two of those things (we know why he drinks – because whiskey is delicious!), but more so, we get to see who the man born on this planet was, and how he differs from his counterpart. Hint: he’s not a bastard.

EDIT: Commenter Eric pointed out something I missed – in the “Cast” page at the end of the book, Einstein’s name is changed from reading simply “Einstein” to “Albrecht Einstein”, and he is downgraded from “Super Genius” to simply “Highly Intelligent.” Thanks, Eric!

Sergei Korolev – Much like von Braun, Korolev was a scientist who ran into interference from his government, but one who eventually made an impact on humankind through his, again, imagination’s ability to make space travel possible. I am certain this not the last of him we will see.

FDR AI – We get the first glimpse at the fully functional AI, complete with audio communication. We see him a little overwhelmed with all the information at his disposal, but never shying away from a joke.

The Golden Key, Part 2
“Imagination is more important than knowledge. For knowledge is limited, whereas imagination embraces the entire world, stimulating progress, giving birth to evolution.”

Imagination is what leads “Good” Einstein to begin to build the monolith that eventually leads to his demise – and it is the distinct lack of that which frustrates “Evil” Einstein so much – he could never let himself imagine the proper way to open the door.

Competing Paths to the Stars
Einstein’s monolith turns out to be a gateway to other worlds or, as he puts it, “A passage, an opening, to the stars themselves.” This comes later in an issue when aliens earlier offered to “give your people the stars.”

Yuri Gagarin has already been teased as being part of the series, and between Gagarin, von Braun and Korolev, a clear team for the task of traveling to outer space has been charted. But which of these paths will be the one that pays off? 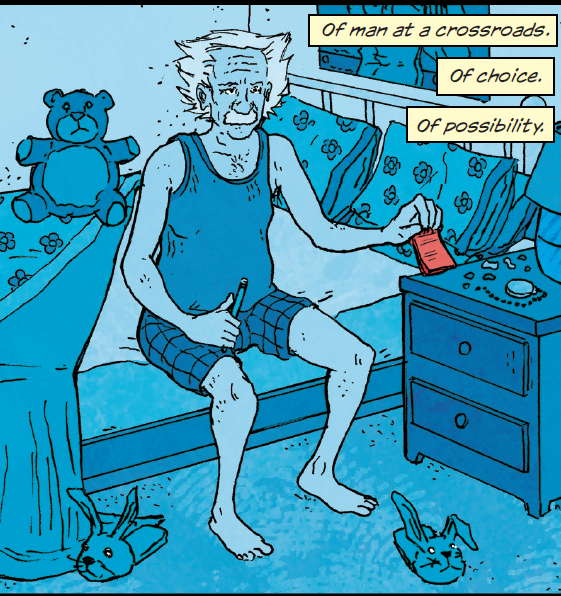 We get a glimpse into “Good” Einstein’s living quarters, and it is hilariously sweet. He has flowered sheets, a Rosie the Riveter poster hanging above his bed, a teddy bear on the bed, and bunny slippers on the floor. He is even found guilty of eating peanuts in bed. I want to hug this version of Einstein and introduce him to my daughter.

The Golden Key, Part 3
“The universe asked a question. I simply answered it. Who could have predicted the hell that followed?”

This quote is the most ominous and open-ended of those presented in this issue. Which hell in Einstein referring to?

This issue was subtitled “The Life and Death of Albert Einstein,” so we can presume that the “Good” Einstein is dead, somewhere beyond the portal, on the catwalk his bleeding body was dragged to by his “Evil” counterpart. But what if he survived? Since the “Evil” Einstein can’t open the portal, could the “Good” one open it again?

Two of the architects of space flight, one for the US and one for the USSR, have been introduced now. Between this and the various pathways to the stars, coupled with the aliens we just met, and the mention in issue #2 of the “Forever-Class Frigate, UTDF von Braun,” I think it is pretty safe to assume that final frontier is going to be in the forefront of the series for some time.

3) “Whatever We Ask In Return”

So what do you think the aliens want in return? A nuclear bomb? Rita Hayworth? A Duke Ellington record?

My guess is that they want a person to bring back with them and, no offense to the late Ms. Hayworth, they’re going to want a scientist. We known Feynman sticks around, so it won’t be him. Maybe they want the irradicated Dr. Daghlian, or the not-human Dr. Fermi? 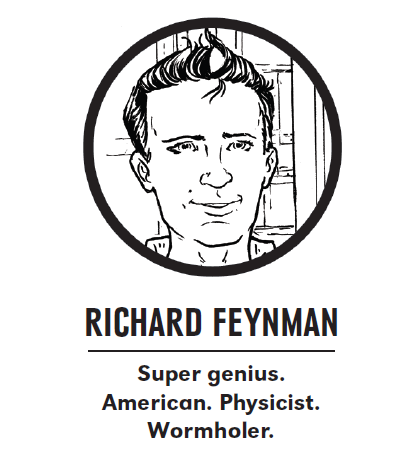 In the brief descriptions on the “Cast” page, only one has changed since last issue. Last month he “invented hair gel,” this month he’s a “wormholer.” Those two aren’t mutually exclusive, as far as I know, and perhaps because my style of hair is that it has no style, I find wormholes far more interesting than hair gel. Wormholes, as simply as possible, are ways to travel through space and time that would be a “short cut.”

So, Feynman one day will be able to travel through space and time faster than the average man. Is Einstein’s portal the reason why?

Nick Pitarra, who we’ll be hearing from momentarily, shows us two panels of an aquarium in the Projects headquarters. Of particular interest are the cephalopods (not sure if they are squids, octopi, or some other specific type of cephalopods), which use jet propulsion to move through the water, and the sharks, because of their physiology that allows them sharps bursts of speed. Perhaps von Braun used these animals as research for his rockets?

Continued below
Dispatches from Inside the Projects
This month, Nick Pitarra talks to us about drawing mirror images. 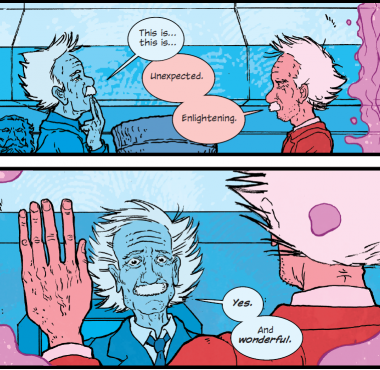 Brian: I want to ask you about the challenges of drawing two versions of the same character, like the Oppenheimer twins (and later, the multiple Oppenheimers hanging out in various scenes) or the two Einsteins – when you’re drawing them, how do you distinguish them from each other? Do you try and draw them as similarly as possible, or are there little differences that you build in? Does this present a challenge for you?

Nick: I’d say with Einstien, Evil Einstien Vs. Good Einstein was solved primarily with facial expressions and body language. There’s a hopeful look in Good Einsteins eyes for example when he wakes up and figures out the monolith, that you never see in the grumpy version.

In regards to Oppenheimer, the multiple personalities all have slightly different uniforms on. And in regards to the twins evil Oppenheimer has a little scar cutting above his left eye, its not much, but its something I added.

I think generally speaking the way you act the characters, not so much how well you draw they’re likenesses, does the most to tell them apart.

Nick also treated us to the final version of this, a drawing of the cast of “The Manhattan Projects” by Charles Paul Wilson III, artist of “The Stuff of Legend.” The version we ran was altered to not show the portal opening before this issue was released. So, enjoy the final version!

Final Thoughts
Next month’s solicitation for “Horizon” promises a look into the future built on the advances of the Manhattan Projects. As long as there are still comics, electric guitars and Reeses Pieces, I’m excited to take a peek.

If you have any questions, thoughts, or observations, please leave them in the comments below, or email brian@multiversitycomics.com.

You can purchase “The Manhattan Projects” at fine comic book stores everywhere, or digitally here.

See you next month!