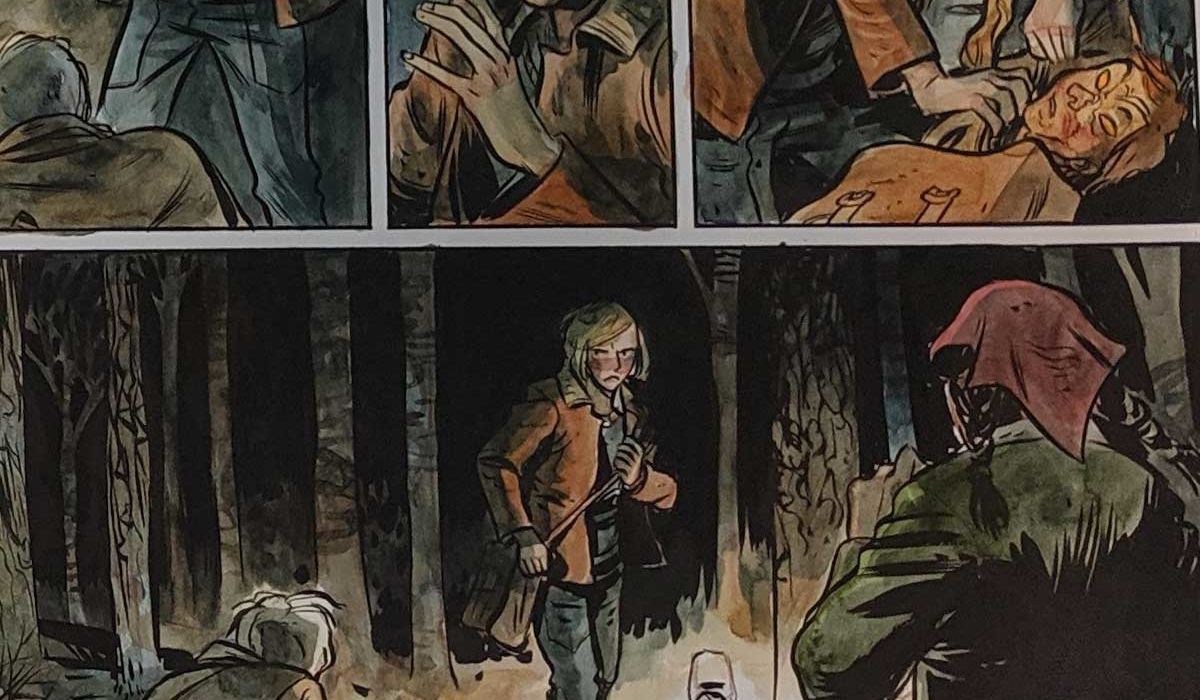 When I think over the last decade of comics—the comics I loved and kinds of stories that clicked with me—one name pops up again and again: Tyler Crook. He burst onto the comics scene mid 2011 with “Petrograd” (a creator-owned OGN with Philip Gelatt), as a guest artist on “The Sixth Gun” #14 (created by Cullen Bunn and Brian Hurtt), and with ‘Monsters,’ his debut arc on Mike Mignola and John Arcudi’s “B.P.R.D.: Hell on Earth.” 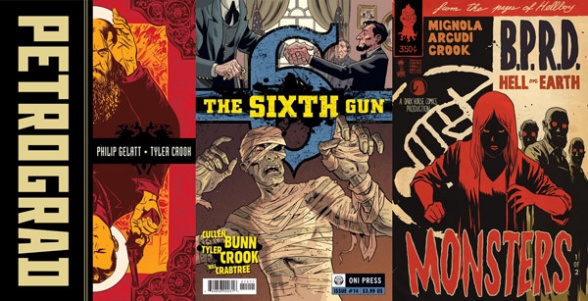 All three came out within a two-month period, and show of Crook’s tremendous range right from the beginning. “Petrograd,” a two-hundred-and-fifty page graphic novel, is all about the political machinations that led to the assassination of Grigori Rasputin. Large portions of “Petrograd” are simply characters in a room talking, but it works because of Gelatt and Crook’s intense focus on character. There are always at least two discussions going on at at any time, and Crook made sure the art tracked both. Just looking at the images, it’s effortless to read the power exchanges in each scene. 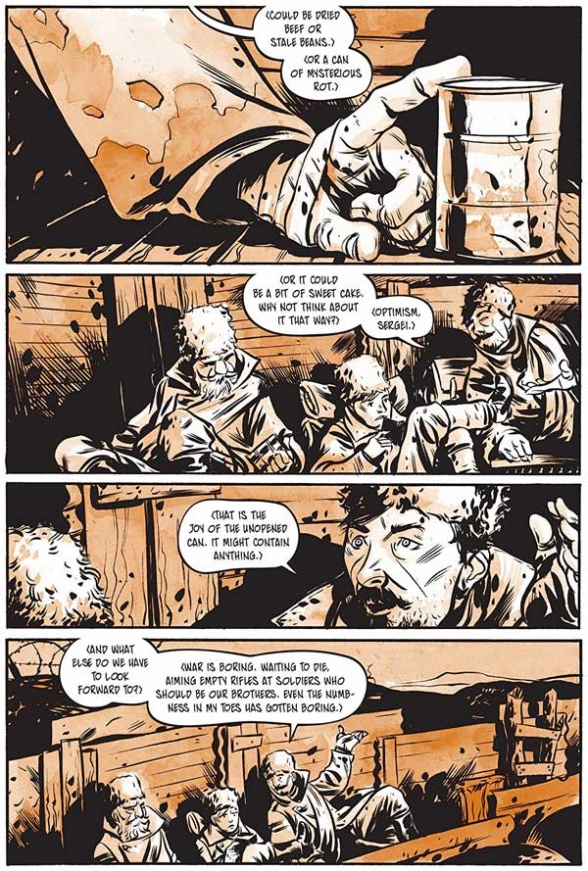 In “The Sixth Gun” #14, Bunn gave Crook a one-shot focused on Asher Cobb, the man that would become the nine-foot mummy throughout the rest of the series. It’s a character-based piece and separate enough from the ongoing plotline that it can function like a standalone tale, giving Crook a bit of stylistic freedom. For the most part Crook keeps the art in the same vein as Brian Hurtt’s work, but for a vision in the middle of the story, he gave us a beautiful watercolor sequence. 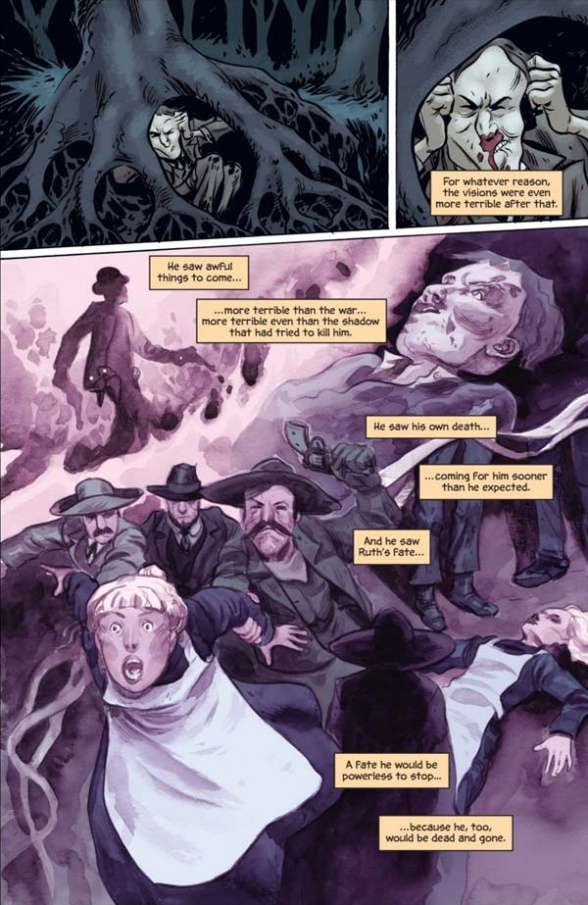 In ‘Monsters,’ Crook had the unenviable job of taking over “B.P.R.D.” from the legendary Guy Davis. Talk about pressure! I don’t know if it was by design or happy coincidence, but Arcudi gave Crook a two-issue arc largely devoid of the epic scale we’re used to seeing in the series and paired down the cast so we were focusing only on Liz Sherman. The result was an arc that accentuated what Crook brought to the series. The sequences with Liz alone with the visions that haunt her are especially striking. 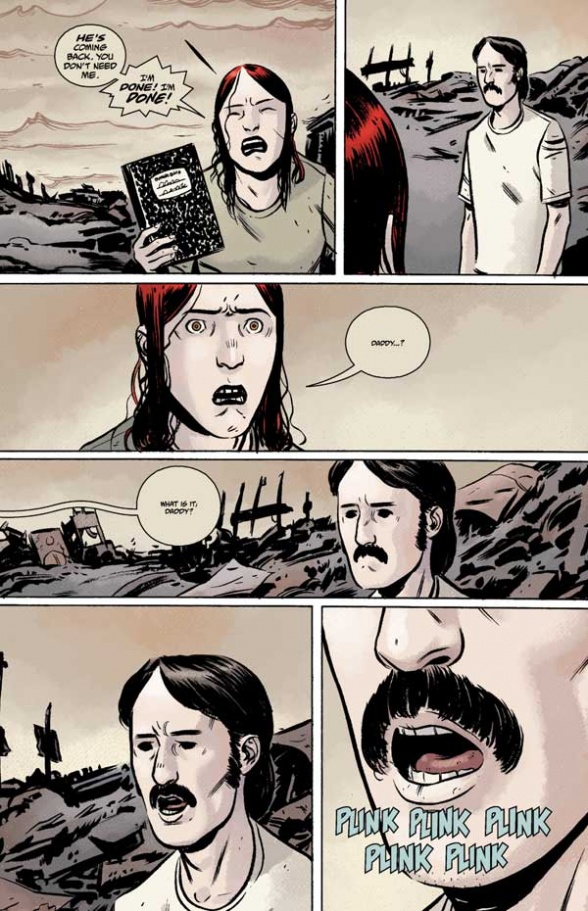 Considering this was how Crook debuted, it’s little wonder he went on to win the Russ Manning Most Promising Newcomer Award in 2012, and ever since I’ve found myself buying every story he’s drawn. For the next three years he worked primarily on “B.P.R.D.,” drawing more issues than any other artist for the ‘Hell on Earth’ cycle. This culminated in late 2014 with the one-shot ‘Grind,’ one of the best reviewed issues the series has ever had. 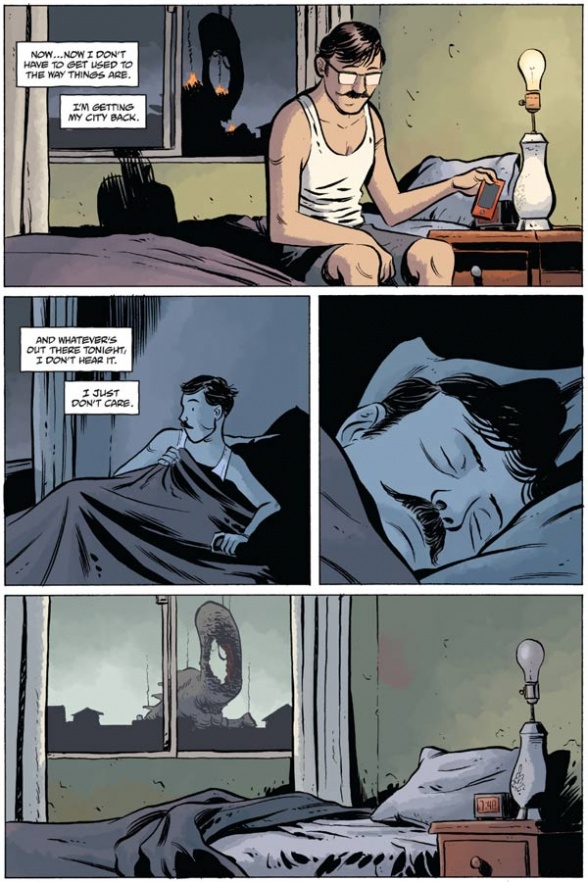 2014 also brought us “Witchfinder: The Mysteries of Unland” (written by Kim Newman and Maura McHugh). While still a Hellboy Universe title, this miniseries was separate enough that Crook could experiment with the art style a bit by introducing gray washes, resulting in a truly memorable book unlike anything else in Mignola’s line. 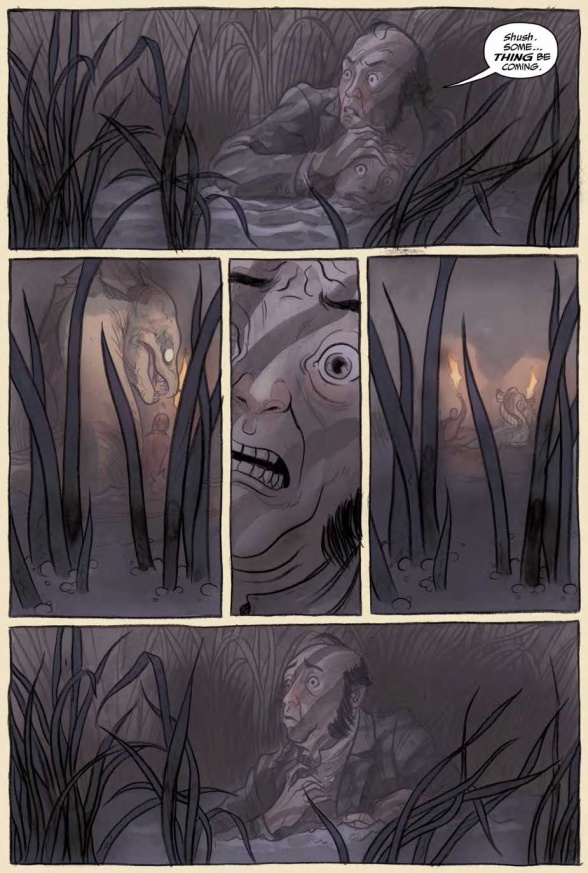 From “Witchfinder: The Mysteries of Unland” (2014)
Colors by Dave Stewart; Letters by Clem Robins

Crook also worked on “Bad Blood,” a creator-owned miniseries with Jonathan Maberry. Here, Crook pushed himself beyond inks and started working with watercolors and doing his own lettering. 2014 was a hell of a year. With each new title it seemed like Crook was getting bolder. 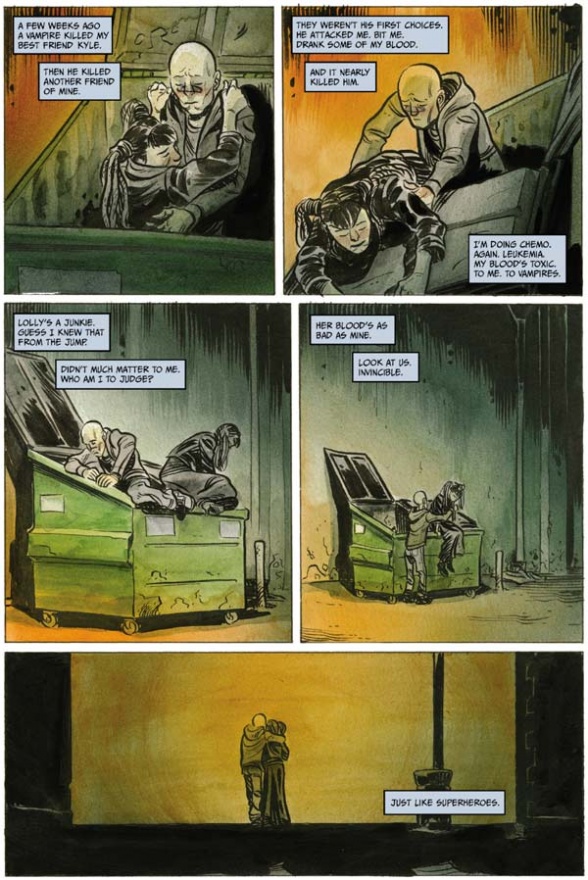 While Crook had been busy on Mignola’s books, he’d continued working with Cullen Bunn too, doing a few fill-ins and a miniseries for “The Sixth Gun.” His work with Bunn got better and better with each new collaboration too; 2015’s ‘Dust to Dust’ was a stunning miniseries and incredibly heartbreaking. 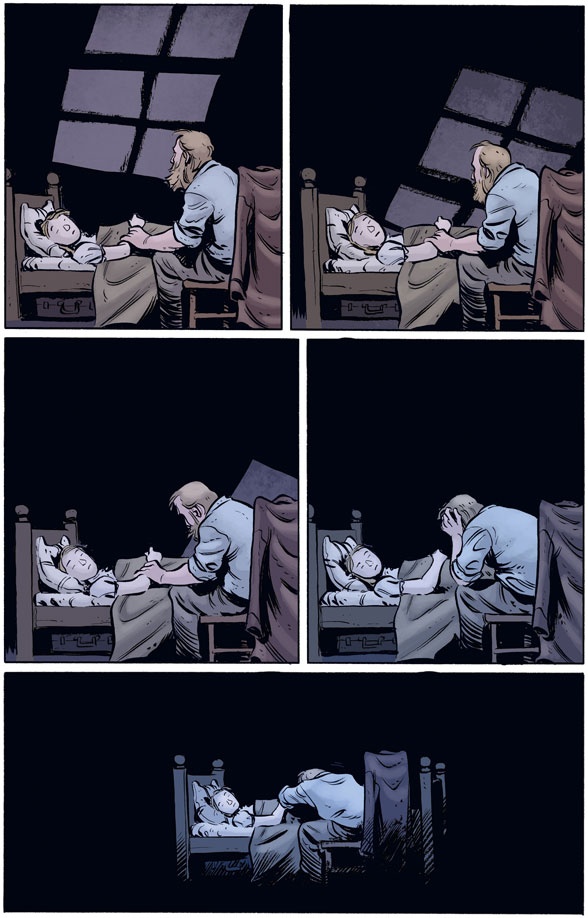 From “The Sixth Gun: Dust to Dust” (2015)
Colors by Bill Crabtree; Letters by Crank!

Crook and Bunn followed this with “Harrow County,” an ongoing creator-owned series and a career-defining work for both of them, and one of the best horror titles of the decade. The art “Harrow County” absolutely delivered in terms of horror—just look at those covers! (How he worked on Mike Mignola’s books for so long and never once did a cover will eternally baffle me.) 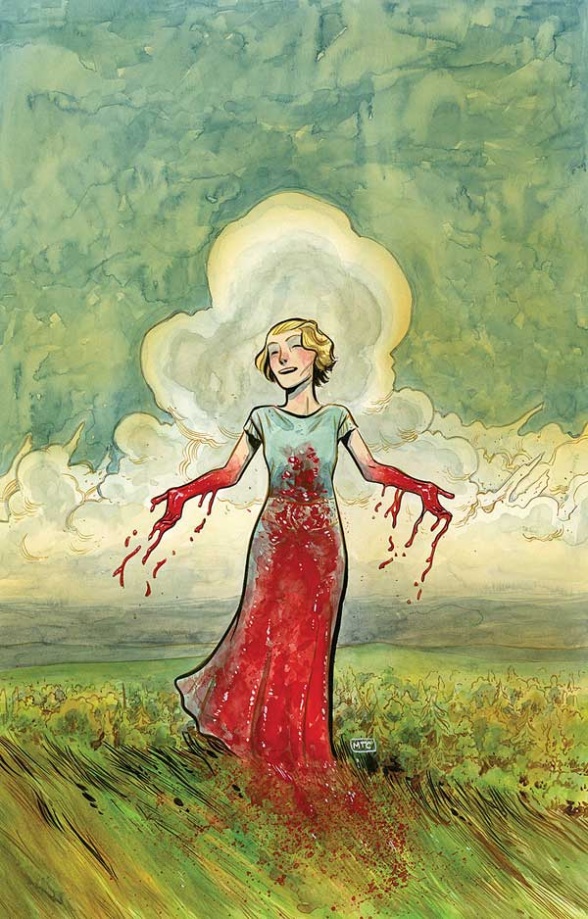 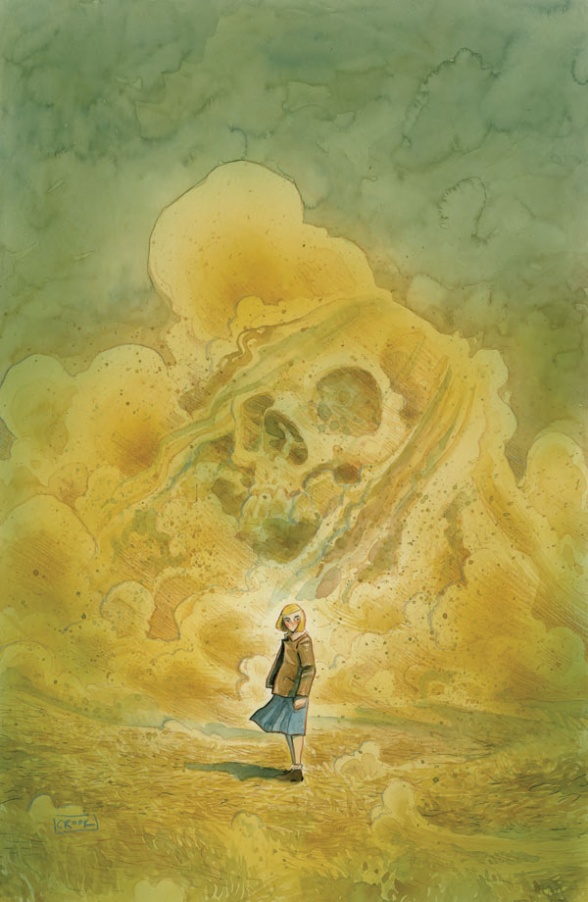 And yet, it’s the character work that gets me the most. “Harrow County,” despite being a horror book, has warmth to it. There’s joy in simply watching Emmy and Bernice walking side by side and singing. Time and time again, Crook makes artistic choices that favourite character, something Bunn must have recognised immediately, because he kept carving out space in the book for character moments, trusting completely that Crook could bring them to life. 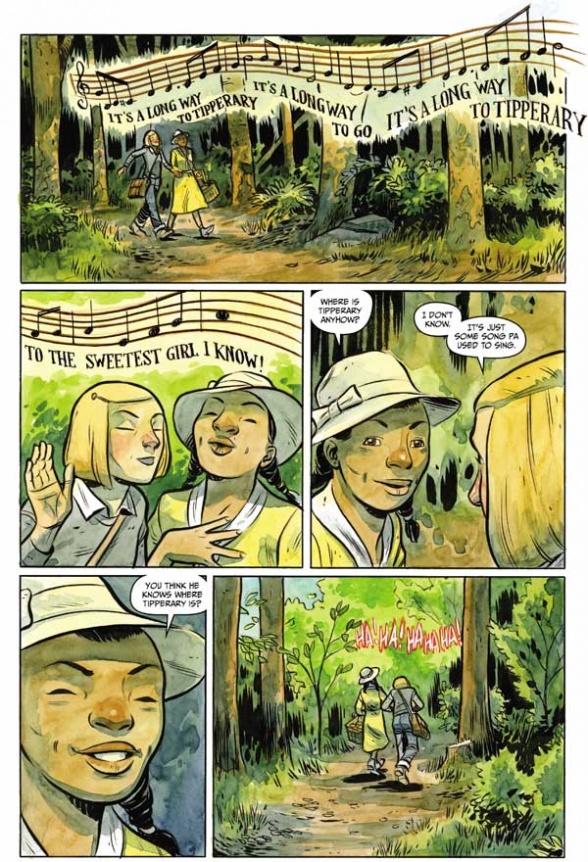 In the final issue, Bunn wrote a series of spreads to showcase Crook’s work, giving us one last walk through Harrow County before saying goodbye. It’s such a wonderful celebration of Crook’s art and the world of “Harrow County.” 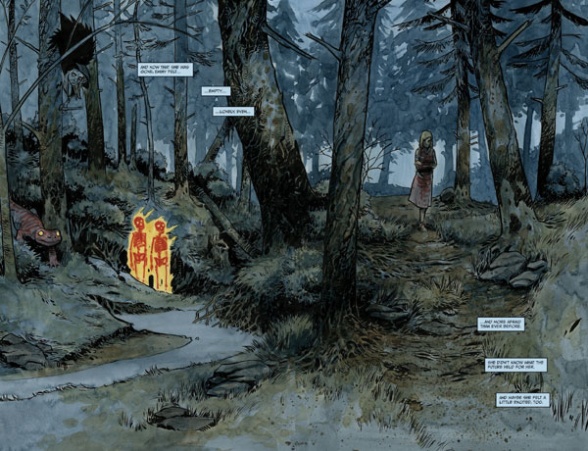 After “Harrow County” came to an end, Crook started a new project with Cullen Bunn and Brian Hurtt, “Manor Black,” where he continues to push himself in new directions. I can’t help but marvel at how “Manor Black” has such a distinct visual identity from “Harrow County.” “Manor Black” communicates its story through color radically different from “Harrow County,” and I find myself genuinely excited to see where the series will go next. There are only four issues at the moment, but they lay a tantalizing groundwork for stories to come. 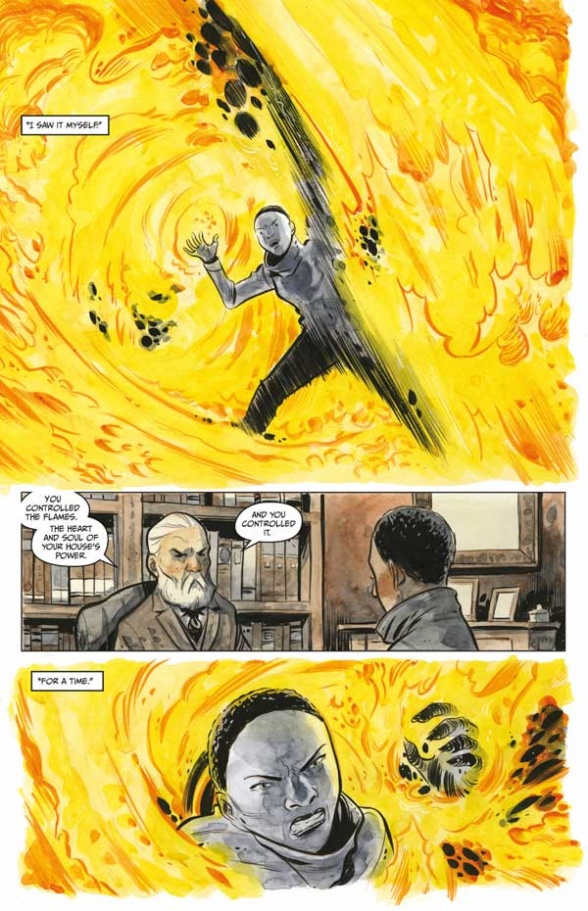 2019 also brought us “The Stone King,” a ComiXology Original written by Kel MacDonald. Here, Crook got to visualize a fantasy world entirely separate from our own, one with stone giants and dog-like steeds the size of a horses. Being only a four-issue miniseries, we spent only a little while in this world, but it was a memorable time—so much so that it garnered an Eisner nomination. 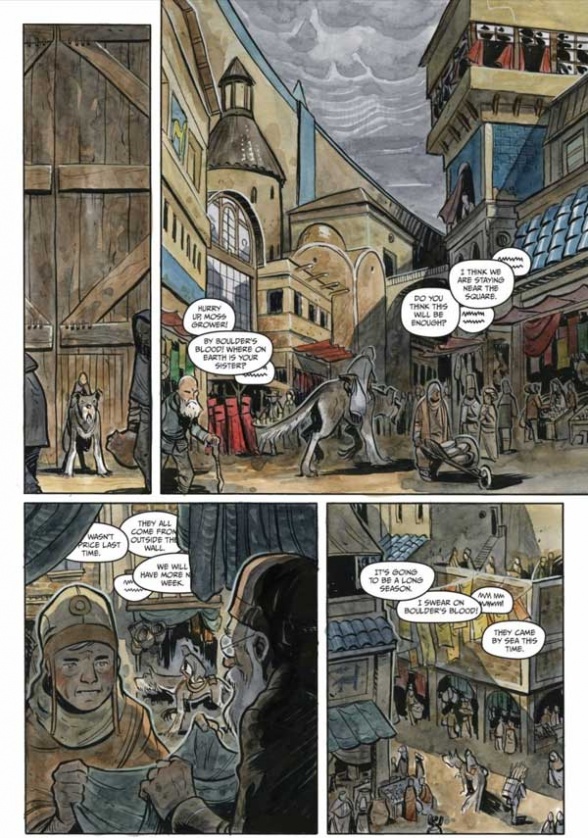 This decade has given us a wide range of stories from Tyler Crook, but there’s a commonality to it all. In the end of the world of “B.P.R.D.: Hell on Earth,” the giant attack in “The Stone King,” and the epic battle god-like witches in “Harrow County,” Crook finds the heart in the scene and accentuates it. In his nine years of comics work, this is the quality I find again and again, and it’s something that reflects my own tastes in the comics I’ve sought out and read in the 2010s.

So to end the decade, I did something I’ve been wanting to do for some time now: I bought an original page of Tyler Crook’s work. It arrived recently and I was thrilled to discover he included not just the page, but the pencils as well. 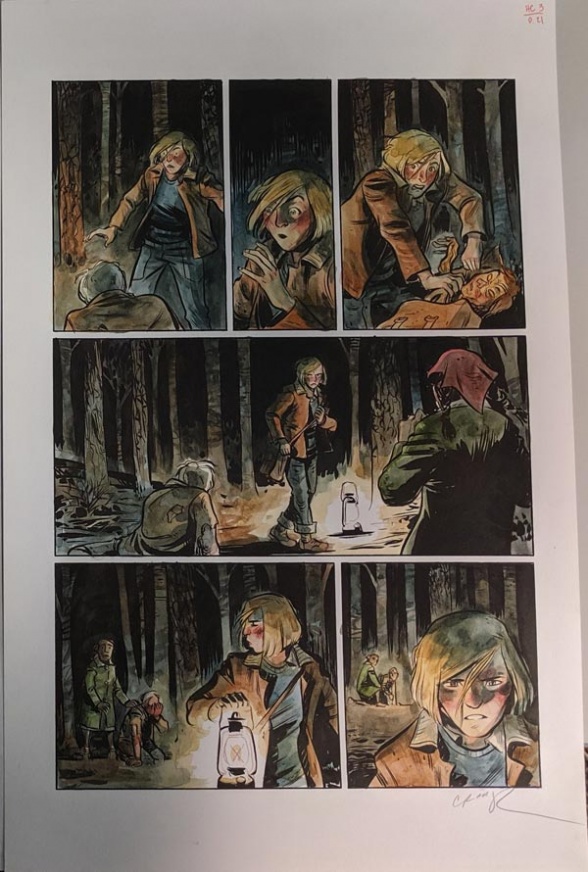 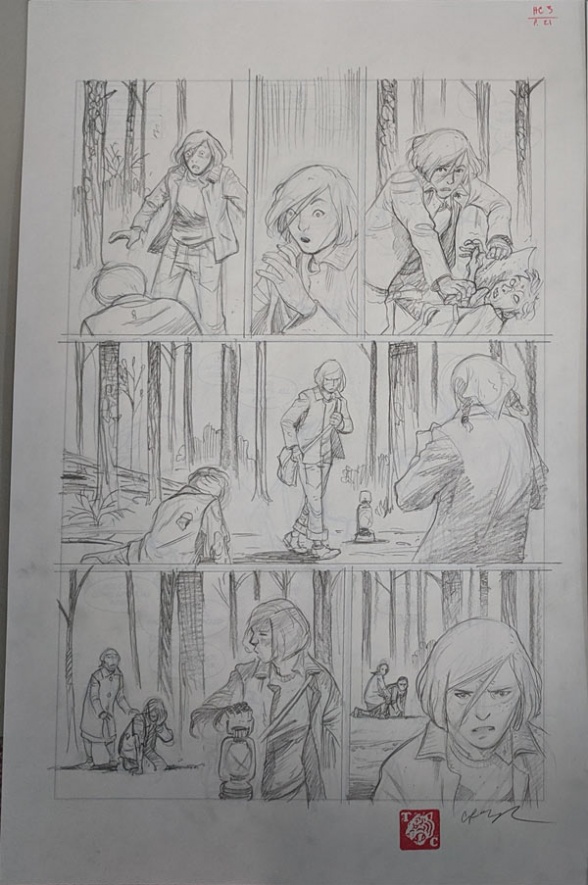 There’s nothing like seeing the art in person. In the pencils, printed in blue, are his layouts and first pass on the lettering… Even the “Harrow County” library editions couldn’t quite capture this glimpse into his process.

I bought this page because of its final panel. It marks a page turn and the punctuation of a rather dramatic sequence, and Crook could have milked this panel to make the emotions big and dramatic, or he could’ve pushed the cliffhanger-like aspects, but instead he went small and intimate—a choice I find infinitely more interesting. 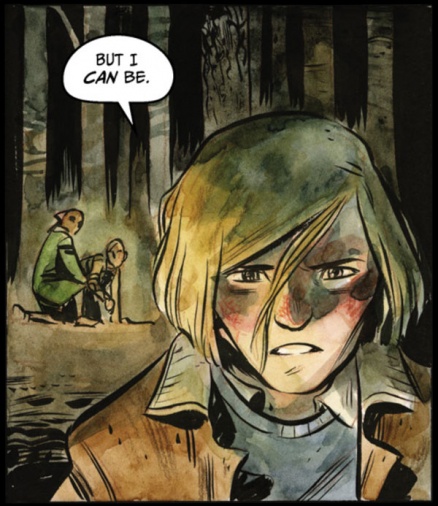 This page seems the perfect way to wrap up my experience of comics in the 2010s, and what I hope I’ll continue to enjoy and immerse myself in as we head into the 2020s.

Feel free to sound off in the comments about the artists you enjoyed in the 2010s, and share art if you can—I love seeing the art that gets people excited about comics. You can check out more of Tyler Crook’s work on his website and on his YouTube channel, and you can follow him on Twitter. If you’re like me and would like an original piece, Cadence Comic Art currently has a sale on his work. Happy New Year, all! 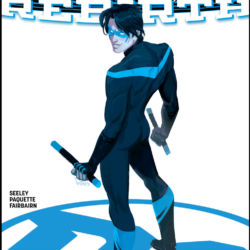 A Celebration of Dick Grayson’s Ass. Yes. We’re doing it.