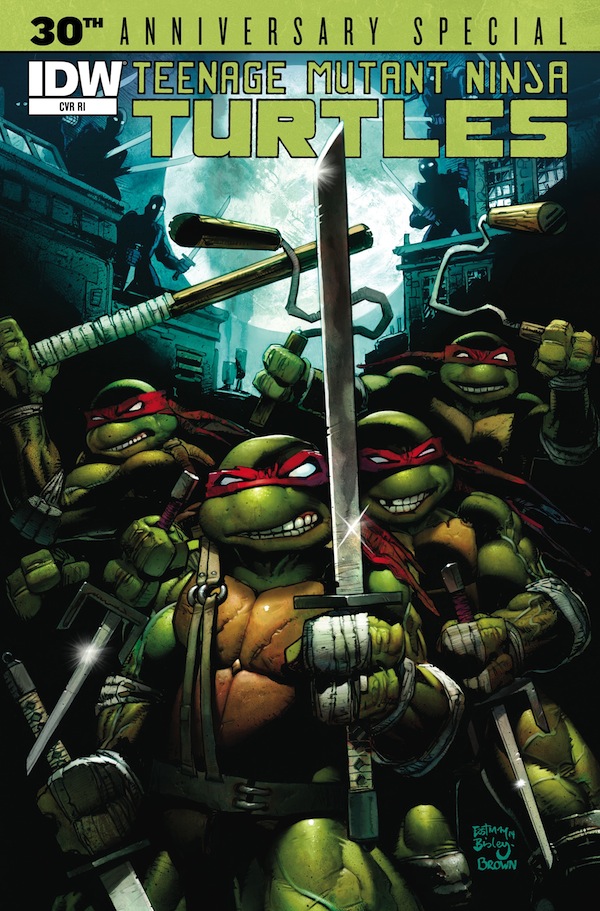 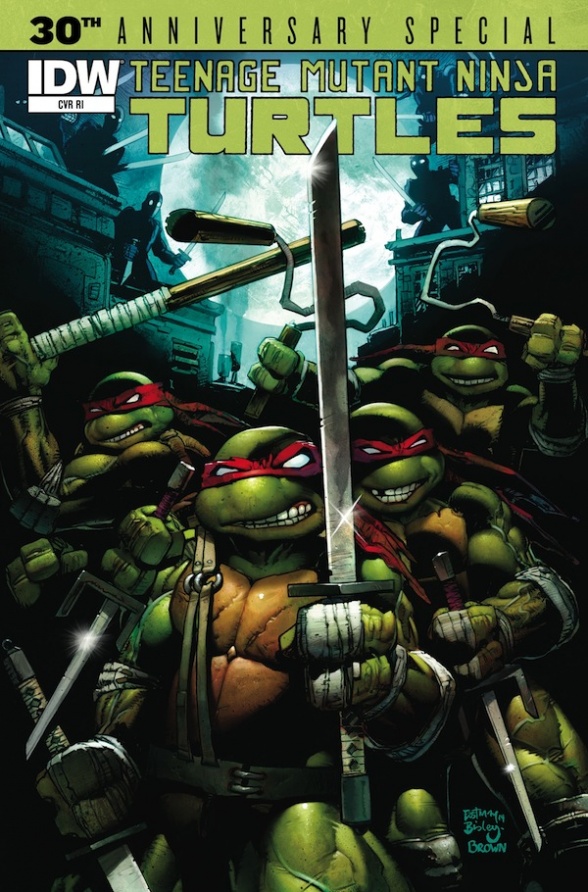 “Teenage Mutant Ninja Turtles” turns 30 this month, making it officially older than many of our Multiversity staff. To celebrate, this week we are featuring a lot of Turtles content, including interviews from many of the creators who have made the Turtles what they are over the past 30 years of comics, all of whom are featured in the brand new “Teenage Mutant Ninja Turtles 30th Anniversary Special,” on sale on Wednesday from IDW. To close out this week, we have a chat with Turtles co-creator Kevin Eastman. Eastman has returned to the Turtles world lately, acting as a consultant, cover artist, and overall overseer of the IDW Turtles book. We also have a page to share from Eastman’s piece in the “30th Anniversary Special.”

The new IDW ongoing reads like an ‘Ultimate’ Turtles (like Marvel’s Ultimate line). You and Tom Waltz are taking elements from the many different Turtles iterations and melding them into something new and exciting. Are you working from a big road map of characters and story beats you want to incorporate, or are you letting the narrative unfold on its own and having that inform what gets brought back?

Kevin Eastman: First and foremost, it is very important for me to give proper credit where credit is due – and Tom Waltz was the original architect to what the foundation of the new series would be before I was brought in to consult, along with series editor Bobby Curnow and of course approved and guided by the team over at Nickelodeon. In my first meeting with the IDW staff, when Tom laid out what he wanted to do, I flipped out – loved it – and opened the door to be part of the team if they wanted me to do more than just covers and I’ve had THE best time ever working with these guys for nearly three years now.

Tom and Bobby do all the heavy lifting here – Tom doing scripts that are paced wonderfully, and Bobby is an incredibly gifted editor – who always has spot on notes and ideas on the development, as well as the final work. Together they then work with Nickelodeon to get the work approved and incorporate the final notes and tweaks, and off to the artists. My role really is to sit with the guys as often as I can, and we’ll go over the road map – and we all brainstorm the possibilities, exploring all plots and arcs – and to me that is the really fun stuff, and in the heat of these sessions some pretty cool stuff evolves.

I guess in addition to the consulting, brainstorming, covers, and layouts here and there, I’ve been able to fit in a few idea’s like issue #21, and last years sixty page Annual. Many of the ideas developed before that issue came out, which allowed me to have some fun with some new characters, several of which are now part of the new IDW TMNT Universe. The terribly late second Annual I am doing, brings back Renet, from the original TMNT issue eight (the Cerebus cross over) which has been a hoot and a half redesigning her, and bringing her fully back into the TMNT’s world. I should be wrapping the forty eight page issue up in the next week or so – I feel completely dreadful it is running so late, but at the same time I have been doing literally tons of really fun 30th anniversary projects with IDW I think all the fans will enjoy through the end of the year. 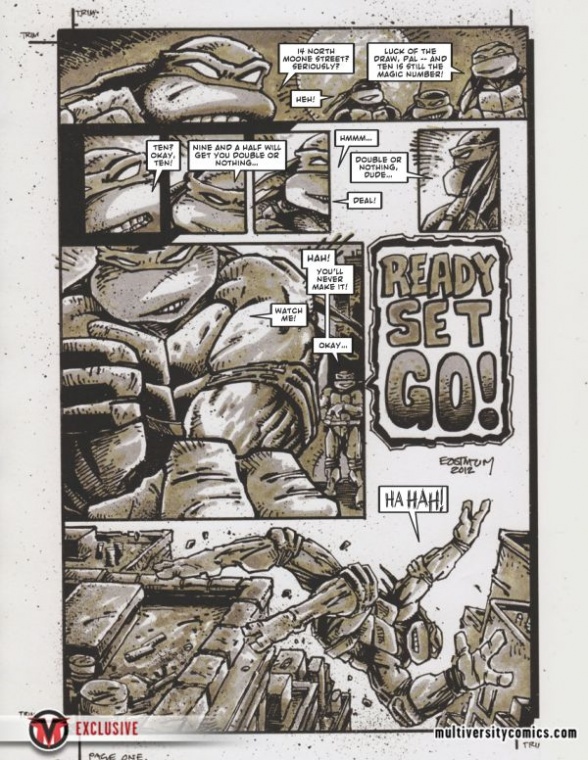 When it came to producing pages, you and Peter seemed to work as one; trading off doing pencils and inks to create a unique voice that was separate from either of your individual styles. Now all these years later when the two of you collaborated on that new cover, was it like riding a bike? Did you just fall right back into the groove?

KE: As you clearly stated, Peter Laird and I had and awesome relationship and combined voice in the early years, and even when we couldn’t draw everyday like we used to, we still had a combined voice over where the TMNT empire went over the next fifteen years, but it WAS incredible to get back together for two covers for the 30th Anniversary. Nothing could replace the way we worked and how passionate we were thirty years ago, and I think we both agreed it would be a lot of fun to do more together… lets see what the future holds, but I’m excited.

Looking back over the last 3 decades, and at all the various Turtles media, what would you say you’ve enjoyed most regarding others’ handling of the characters and the concepts you and Peter created?

KE: That is a SUPER tough question, as I sincerely liked all of them. For comics, the original “Tales of the TMNT’s”, the Bode issues, Michael Zulli run, and the Veitch series, as well as the original Ken Mitchroni and Chris Allen Archie series, Images run… too many others to name, but each had a heart and soul to them. I feel all of the writers and artists that stepped up really gave them their all. If I had to pick one to put on top, it would have to be the current IDW run, as all those TMNT worlds have left an awesome history to pick and choose and mine for options to include in the playground Tom and the crew have designed.

For other media, hands down it would be Steve Barron’s first TMNT film, and I thought Kevin Munroe’s 2007 animated film was incredibly strong and very well done. The Nickelodeon “Turtles Forever” also ranks at the top of that list. Out of the 280 animated shows we worked on, I thought there were some wonderfully written (and animated) shows, but as most of them were reflective of what was going on at that time, they all have a certain charm.

I’ve always been curious about the fifth Ninja Turtle, Kirby. What’s the story behind him? Why hasn’t he ever been used, and what’s the likelihood he’ll show up in something one day? Possibly the IDW series, maybe?

KE: Kirby, the proposed “Fifth Turtle” was something Peter and I developed for a fourth New Line Cinema film that was eventually abandoned. It was developed a bit further for Motion Picture Corporation of America film version, that was also abandoned – there are several drafts of script done, I had them floating around for years and sold them to a collector several years ago. Not long after the films were abandoned, Saban and Fox Kids optioned a live action series, and we developed the concept of Kirby as one of the new characters for the series – but in the eleventh hour, the head of Fox at the time, decided the Kirby character had to be changed to a female, Venus, or there would be no series. Peter refused to be part of it, and I pushed ahead with the concept to make it all that it could be… in hindsight, I should have stuck by my partner and let the chips fall where they may, something I regret to this day.

I do not know if you’ll see a fifth Turtle, beyond the ongoing character Slash in the current series, or a female Turtle for that matter, I think it would need to be something carefully thought out, and something with a very serious and strong foundation.

Thirty years from now, where do you see the TMNT franchise? What are your hopes for the long term health of the series?

Considering the fact we thought we’d never sell a single copy of issue one, let alone still be discussing new TMNT projects, comics, TV, and film projects thirty years later… I feel it would be impossible to even venture a guess. I guess at the end of the day really, it is in part about the work we do with the TMNT projects on the one hand, but if we don’t have the fans to support those, that is pretty much all she wrote. I am incredibly grateful to all of those that have stuck with the TMNT’s all these years, they have given a small town kid who only wanted to be Jack Kirby when he grew up, the job of his dreams – my dreams, I really am the luckiest guy on the planet. 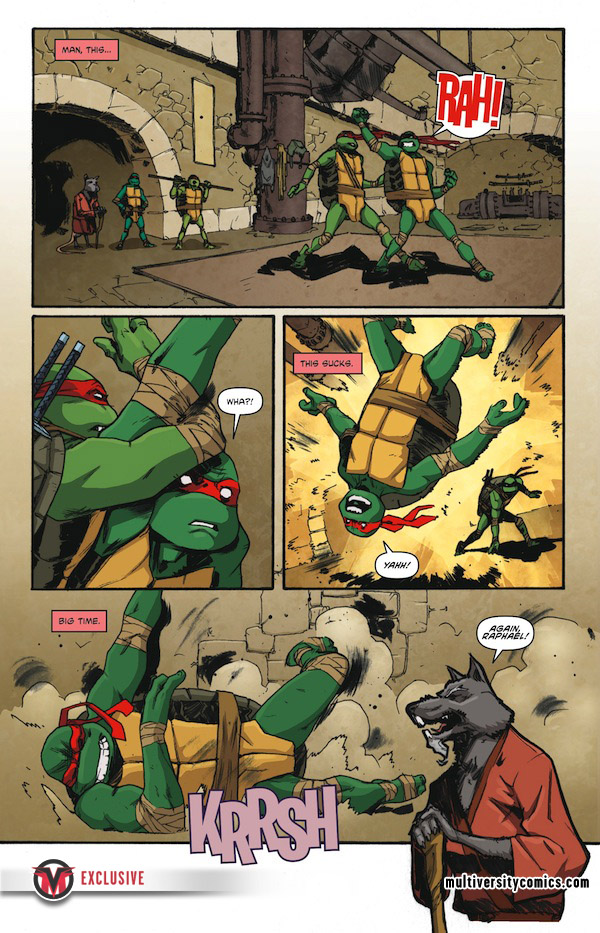 30 Years of TMNT: The Modern Era with Tom Waltz and Dan Duncan [Interview] 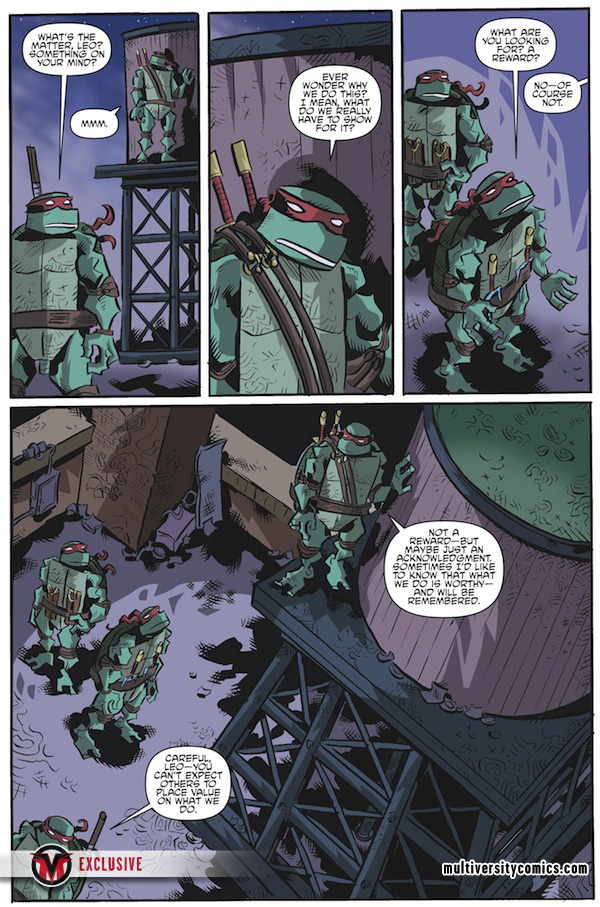 30 Years of TMNT: Stepping Back into Mirage with Jim Lawson [Interview] 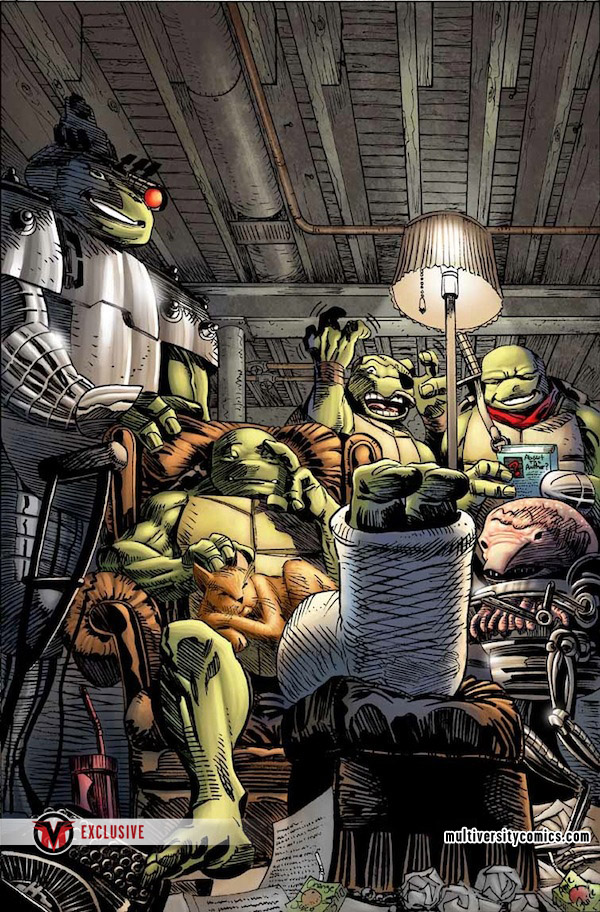 30 Years of TMNT: Gary Carlson on Bringing the Turtles Back to Their Roots [Interview]