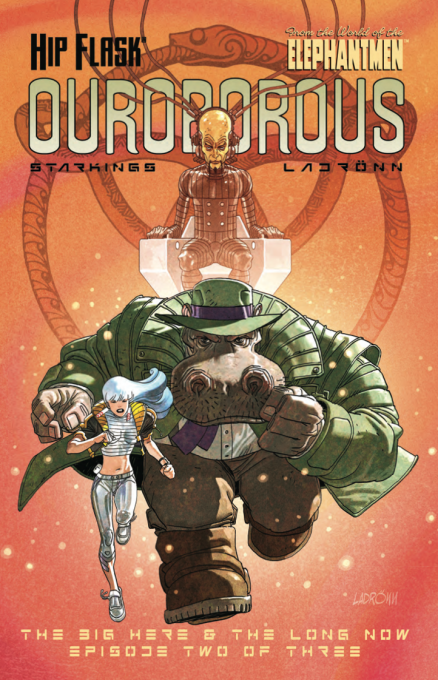 This Wednesday sees the release of Ouroborous, the long awaited fourth chapter of Richard Starking’s Hip Flask. This issue explores the fallout from the Silencer’s actions, and sprinkles in a dash of time travel to spice things up some. I had the chance to pick Richard’s brain a bit, exploring some of his writing process, working with series artist LadrÃ¶nn, and the world Hip Flask lives in.

The last issue of Hip Flask ended with such a bang, can you give anyone not reading the series a tease of what they’re missing?

Richard Starkings: Well, Sahara’s father has sent the Silencer to kill Obadiah Horn, but at the last second, Sahara got in the path of the bullet. And then some globe encircling ship appeared in the sky above Hip and Vanity who were on the trail of the owner of a mysterious car that materialized in the center of a time travel experiment. 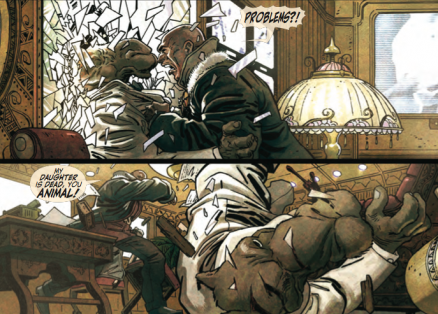 Where does this story fall in terms of the big picture with Elephantmen? With this issue, we’re (seemingly) obviously further into the future that the ongoing Elephantmen series. With this slated as a 5-issue mini, what can you tell us about how it all ties back into the big story.

RS: The events in ELEPHANTMEN have been set 2 years — sometimes 20 years or more — earlier. The main stories we’ve followed in ELEPHANTMEN have all occurred in a two or three month period. Some of the main characters in the series meet their demise in the HIP FLASK storyline, so ELEPHANTMEN was, by necessity, designed as a prequel.

LadrÃ¶nn, your artist on the series, seems to hit a new high in this issue (which is saying a lot!), can you talk a little about your process with him? Where do the two of you work independently and where does collaboration begin?

RS: LadrÃ¶nn was very generous with his time and energy when we started working together on HIP FLASK, as anyone who has seen UNHUMAN: THE ELEPHANTMEN ART OF LADRÃ–NN can attest. His commitment was invaluable because all the ideas I had for the series were BIG ideas and he helped me bring them to life exactly as I’d imagined. Every artist who has ever worked with me knows that I have very specific ideas about the way the characters look and behave… I often communicate those ideas with sketches and doodles, and even before LadrÃ¶nn came on board, I’d designed all the costumes and lead characters. The advantage of working with a talent like LadrÃ¶nn is the grandeur and majesty he brings to the world. We have very similar touchstones and share a lot of the same inspirations — ALIEN, BLADE RUNNER, DOCTOR WHO, THE FANTASTIC FOUR — so it has actually been very easy for us to communicate. The first issue, UNNATURAL SELECTION, involved more intensive communication as LadrÃ¶nn was creating a whole new way of working, both with paint and photoshop… he was shaking off six years of working Marvel style and I was encouraging him to do so — I wanted lots of double page spreads and splash pages, fewer panels on each page and LadrÃ¶nn was happy to accommodate me.

Seems no one is surprised with how good this issue looks.

With your encouraging LadrÃ¶nn to explore different modes of working and approaching the page, did he present you with any new ways of thinking about your characters and settings? Were there any story elements that you thought were concrete before he came along?

RS: No, I’d developed all the characters and story ideas years before LadrÃ¶nn got involved, but when we started working together, he had asked me how the Elephantmen were created and, after I told him, he told me he wanted to tell THAT story, the origin of the Elephantmen, which became HIP FLASK: UNNATURAL SELECTION. I had wanted to start with HIP FLASK on the trail of The Silencer, so that readers were presented right away with the Elephantmen characters living amongst us, but I was happy to tell the origin too. More than anything, LadrÃ¶nn definitely helped establish the tone of the series — the darkness and ugliness which we both enjoyed in movies like ALIEN and BLADE RUNNER.

As a letterer, how does dialogue and other text placement play into cover and page design? Do you leave dialogue placement to Ladronn, or is the page breakdown process a collaborative one?

RS: A good artist has always considered dialogue placement before the pages get to the lettering stage — Jim Lee is one of the best artists in that regard, when you first see his artwork, you can’t believe there’ll be space for balloons, but there always is. With both ELEPHANTMEN and HIP FLASK, I re-dialogue the issues AS I letter them, and I can honestly say that I don’t really think too much about placement, it’s second nature to me now after over 25 years in the business. For me Lettering is so much a part of the whole comic books, I see it even before it’s there — sometimes before it’s even written! We created a lettering font based on LadrÃ¶nn’s lettering style for CABLE in the 90s and refined it for THE INHUMANS. It’s used now on most of the HUMANOIDS books, including LadrÃ¶nn’s work on FINAL INCAL.

What are some of the things you consider when re-dialoguing? What can a finished page change for you?

RS: I always like to include some dialogue in my scripts to suggest the tone and direction of a scene — recently I included some quotes from ALSO SPAKE ZARATHUSTRA to guide ELEPHANTMEN artist Axel Medellin as to the state of Hip Flask’s mind when he practically Hulks out on us. But the finished pages were sound effects with no real narrative or dialogue. The art spoke much louder than words, so I felt I didn’t need to add any. In OUROBOROUS, in a scene between Hip and his arch enemy, Obadiah Horn, I swapped out the script I’d written seven years ago for dialogue that referenced ELEPHANTMEN continuity.

Is there a definitive point in your career when you realized that lettering and it’s placement had become second nature? Or did it creep up on you?

RS: Probably when I was 12 or 13 years old and I could distinguish the strengths an weaknesses of different pen letterer’s styles in various Marvel comics.

When we first learned of Ouroborous, it was teased with a July 2006 street date. Can you talk a little about how the Elephantmen ongoing affected this release? Is it a situation where time got away from you, or did the story and art decide that there was something else that needed to happen?

RS: There’s a question you’ll have to ask LadrÃ¶nn! He spent much of the time between 2005 and 2012 creating those FINAL INCAL albums. They’re beautiful pieces of work, but naturally, I’d have preferred he had finished HIP FLASK first. I launched ELEPHANTMEN because I had a lot of ideas for the HIP FLASK characters begging my attention and I couldn’t wait on LadrÃ¶nn. I met with him recently and pointed out that I completed 50 issues of ELEPHANTMEN in the time it has taken him to finish this 4th issue of HIP FLASK!

Were you ever tempted to recruit another artist to finish the series?

RS: Not at all. I knew that LadrÃ¶nn would take his time, even if I didn’t realize HOW long he’d take! But one of my strengths is patience. Perhaps I’ve been TOO patient, but after issue #5 of HIP FLASK is complete, readers who come to the collection fresh won’t care about how long I had to wait for it. I realized this after working with J. Scott Campbell on DANGER GIRL. Once the original 7 issue series was collected, what mattered wasn’t how long it took, but how good it was. 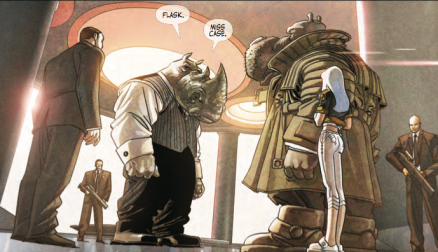 Speaking of Elephantmen, how has that series affected Hip Flask? Has anything in the Hip Flask mini changed because of how the story in Elephantmen has evolved?

RS: Not really — I wrote the script in early 2005 and made very minimal changes when I lettered it. It was fun to reference earlier stories, but the plot of the five issue mini hasn’t altered in any way. Readers who see it as part of the bigger ELEPHANTMEN narrative, will have a much richer reading experience, but it is a story that can stand alone.

Your characters live in a world that has seemingly endless storytelling possibilities. With that in mind, do you feel that you’ve been working to a definite end? How do you approach narrative in a world of your own creation?

RS: I’m really proud of the world I’ve built and the characters that live in it, but I feel I’ve barely scratched the surface… there will be at least 80 issues of ELEPHANTMEN and 11 trades total, but there’s no definite end as such.

While a high concept, sci-fi noir book on the surface, you use Hip Flask to examine a variety of ethical questions the world faces. From animal rights, to scientific boundaries, to proxy wars, all manner of neo-ethical questions are raised. When in the creation of the series did you know you wanted to incorporate this element of the story?

I love science fiction — I describe the series as PULP SCIENCE FICTION, which, for me encompasses everything from DOCTOR WHO to THE FANTASTIC FOUR, THE HULK, BATTLESTAR GALACTICA, INDIANA JONES, STAR TREK, STAR WARS, ALIEN, BLADE RUNNER and UFO, THUNDERBIRDS and PLANET OF THE APES. ELEPHANTMEN is my mash up of all those concepts I grew up loving… the real beauty of it being something new and unique despite all those influences is I often don’t know what’s going to happen next!

I’ve written issues for creators like Rob Steen (FLANIMALS, ERF) and Shaky Kane (BULLETPROOF COFFIN) which read like episodes of THE TWILIGHT ZONE and recent storylines for Axel Medellin which remind me of issues of DAREDEVIL and THE UNCANNY X-MEN that I loved as a teenager. The story LadrÃ¶nn and I are telling in HIP FLASK is part ALIEN, part BLADE RUNNER, part WATCHMEN, part PLANET OF THE APES with huge helpings of Moebius and Kirby… in amongst those influences, I think our own personalities and issues have emerged.

The theme of ELEPHANTMEN is really, “What does it mean to be human?” Naturally, that gives rise to all manner of questions and considerations. Western culture is built on the biblical assumption that man holds dominion over animals… what then if a man is ALSO an animal? Most of the challenging issues in ELEPHANTMEN stem from that conceit. In my eyes, Hip Flask is just a guy trying to get a job done. He has the soul of a man but it is trapped in the body of a human/animal. The people who have problems with that really have a problem with themselves — in buddhism, the world of animality is a world in which we look down on those creatures we feel superior to and look up to the creatures to which we feel inferior. All civil rights issues stem from the world of animality. True humanism is compassion for everyone, no matter their station in life. Hip is a man of compassion, as Chandler says; “Down these mean streets a man must go who is not himself mean, who is neither tarnished nor afraid… a complete man and a common man and yet an unusual man. He must be, to use a rather weathered phrase, a man of honor.”