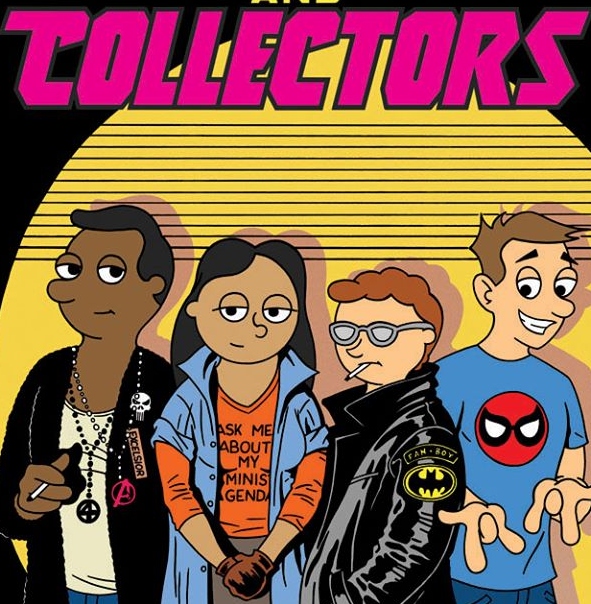 The relationship a comic book collector has with their longboxes can be just as deep and as meaningful as with one’s spouse or partner. If you’re lucky, you have someone that shares your passion for sequential art – – or at least mildly tolerates it. For comics fan and owner of California comic shop Hi De Ho Comics Eddie deAngelini, that relationship provided inspiration for his webcomic “Collectors” dealing with the ups and downs of sharing your love of comics with the one you love.

To date, “Collectors” has been serialized in four print annuals.  There’s a Kickstarter for the fifth underway, with 70% of its funding goal met since it was launched over the past weekend.  I chatted with Eddie about his comic, his influences, the challenges of being a business owner during a pandemic, and some of the famous folks that walked through the Hi De Ho doors.

Tell us a bit about your webcomic “Collectors.” 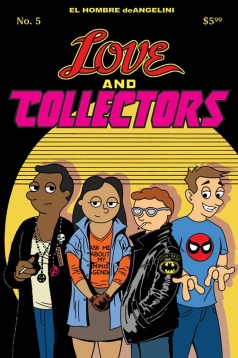 Collectors Vol. 5 Cover Art
Eddie deAngelini: Collectors is about the two things I love most: my wife and my comic book collection…but not always in that order. It’s done in the style of a Sunday morning newspaper comic strip, which was my first introduction to comics. From there, I consumed a steady diet of anything Spider-Man, Batman and the like. That love of those characters and their creators helped to shape my comic strip. But the real humor comes from sharing a marriage with someone who isn’t from that world and that’s where Kristen comes in.

The second star (or first, depending on who you ask) of Collectors is your wife, Kristen.  How does she feel about what appears to be personal conversations jumping from your home to the page? Has there been anything she’s vetoed from being public?

ED: I always tell people that some of the gags in my comic strip actually happened and some are made up, and I leave it to the reader to decide which is which. At first, Kristen was worried about the way she’s portrayed in some of the comic strips. She was worried that she’d be thought of as an angry and nagging person, but the readers love her. One even went as far to say “I love mean Kristen!” Kristen has been supportive of me since day one of starting Collectors. I try to sprinkle in a sweet comic strip here and there and I think that helps to keep a happy home life.

Kristen is also a bit of a comics fan herself, and co-hosts her own podcast on Latinx in the comic book industry, Comadres y Comics.  Was she a fan before you two met, or did the love of comics come out of your relationship? 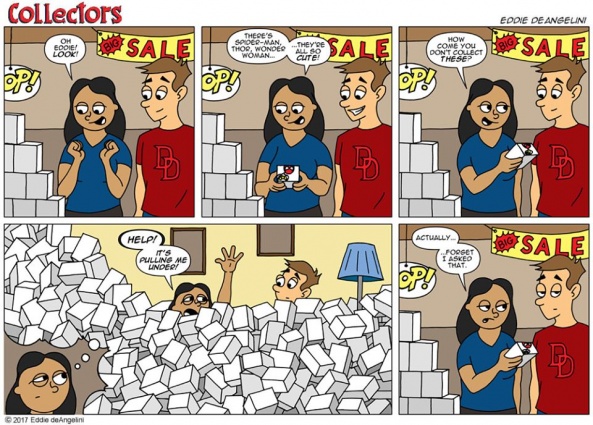 A recent Collectors strip on the perils of toy collecting
ED: Kristen didn’t know anything about comics when we first met. Her education came when she agreed to manage Hi De Ho Comics with me. She got tired of some customers assuming she didn’t know anything because she’s a woman. She made sure that no one could talk down to her by reading as much as possible and learning the industry. She ended up finding female and Latin voices in comics that she could relate to and enjoy. Out of that came her podcast that she and her co-hosts have built into an impressive body of work.

Tell us a bit how you create “Collectors.” Do you work primarily in digital, or pen and ink, or a bit of both?

ED: I pencil and ink every strip to this day. I love the tangible aspect of pen and paper. From there, I scan my work and the colors and lettering are done digitally. Just recently, another cartoonist was nice enough to pass down his older Wacom to me, so I’m considering going all, or mostly, digital.

As a longtime comics fan, what were some of your favorite stories growing up?

ED: I absolutely loved anything Spider-Man. My dad would stop and buy me comics on his way home from work when I was a kid and I would read and reread those comics until they fell apart. As an adult, I can afford to buy some of the comics I dreamed of as a kid and that love continues to this day.

Who are some of your artistic inspirations?

ED: My inspiration comes from everywhere: Comics, music, movies, real life. Some of my inspirational constants are the works of Jack Kirby, Steve Ditko, Jim Steranko and many more of the comic book legends of the 50s, 60s and 70s. A more recent inspiration is Harvey Pekar. I was never exposed to him when he was alive, but I later discovered his work and found a very painfully human quality to it. One of the best compliments I’ve gotten is when someone called “Collectors the American Splendor of today”.

Is there one character in comics that you’re dying to take a stab at writing or drawing? And what spin would you put on it?

ED: I never daydream about writing or drawing already established comic book characters. I’m more excited about what I can do with my own characters and about new characters and new comic strips that I can create in the future.

You’re in a unique position as both a comics creator and a comics business owner, as the owner of Hi De Ho Comics in Santa Monica. How have things been since you had to shut down for the lockdown?

ED: It’s been a very surreal time. I’ve been going into the shop as much as I always have to do as much mail order business as I can, which is our only source of income at the moment. Our current closure might be temporary, but it will have long lasting repercussions once the doors open again and I fear that a percentage of small businesses nationwide won’t last into 2021. I agree with the need to shut down, but I’m very frustrated with our current administration favoring big business over the little guy.

Being in Southern California, you’ve probably had a celebrity or two come through your doors.  Any memorable encounters or experiences?  I know one comics writer and artist that also used to be one of your employees …

ED: You’re referring to Sina Grace, writer of Marvel’s Iceman and BOOM! Studios’ Ghosted in L.A. and all around awesome guy. He worked at the shop before I bought it, but I met him and friended him through the con circuit. Given the shop’s location, we get a lot of film and TV people stopping in and shopping. Some of my favorites are Joss Whedon, Mark Hamill, Robert Kirkman and Mark Waid. But my all time favorite celebrity shopper is Frank Grillo, who is an all around super nice guy and my personal fitness role model.

As a business owner, what’s the number one thing fans can do right now to help their comic shops survive?

ED: If you’re a regular at an LCS, the best thing you can do right now is don’t forget about them. Stay in contact with them. Stay engaged with them on social media to help them stay relevant and continue to give them your business. There may be no new comics coming out right now, but your shop has a wealth of back issues and trade paperbacks. Now is a good time to try out all those older series that you told yourself you’ll read one day. You can also help them by buying a gift certificate now to use when they reopen. Equally important are all the smaller indie comic creators out there who are struggling. With all conventions postponed indefinitely, a sizable part of their income has been taken away. If you follow any indie creators and love their work, support them now. Shop on their websites and support their Kickstarter campaigns. We comic folk are great at banding together and helping each other. Together, we’ll make it through any rough patch this industry can throw at us.

Visit Hi De Ho Comics online at http://www.hidehocomics.com. Collectors is available weekly online at https://collectorscomic.com, and don’t forget to check out the Kickstarter for Volume 5 of “Collectors” before it closes on May 28th.