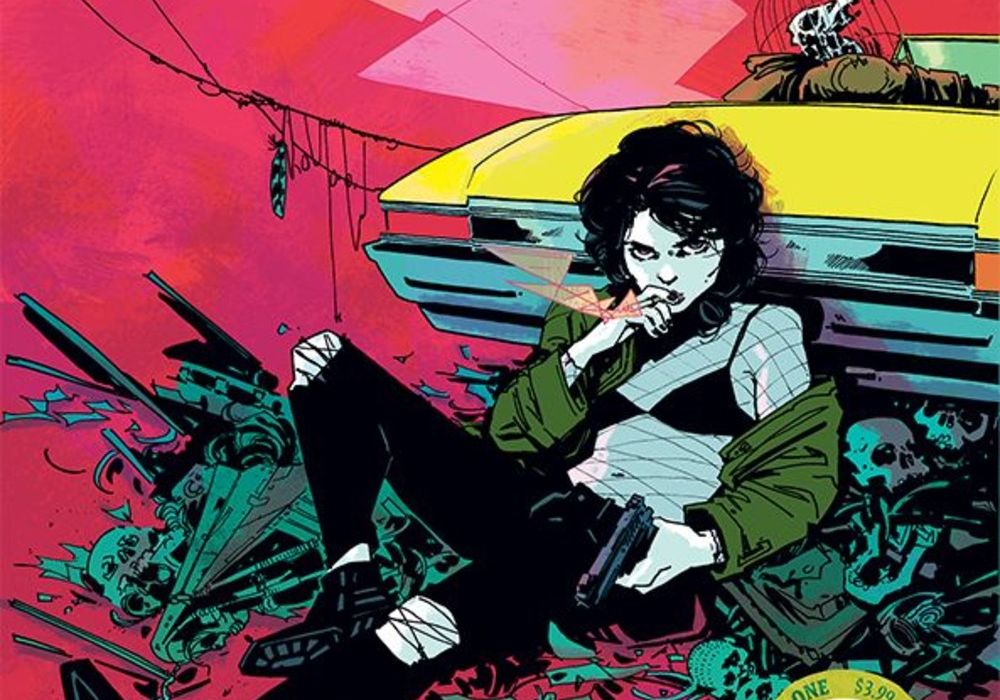 In recent years, grindhouse-style stories have slowly come back to public attention. With post-apocalyptic settings already in a variety of tales, the grit and grime of a cross country chase in a wasteland isn’t the most unusual of plots. However, through the combined efforts of writer Dan Watters and illustrator Dani Strips, the harsh, unusually fantastical world of “Coffin Bound” shows that there is more than enough life in these tales, especially in the comic medium.

A big thanks to Watters and Strips, who sat down to answer some questions about the series.

You’ve both dealt with relatively, shall we say, dark and “gritty” stories, from the horrors of “Deep Roots” and “Lucifer” to the Wild West atmosphere of “The Girl with No Name.” How does the apparently post-apocalyptic road trip present in “Coffin Bound” compare to the tone of your previous works?

Dan Watters: I’d say “Coffin Bound” is not a million miles away- anyone who’s liked those books should find plenty to like here, too – but it’s definitely an evolution. That’s what you’re always trying to do as a creator. I think I’ve been actively expunging my more direct influences as I go along, so “Coffin Bound” is probably all the more “me” than books I’ve worked on before, which I hope will be the case with every book, to be honest.

“Coffin Bound” is dark and strange, for sure- we’re getting the word surreal thrown at us a lot, which I found odd at first, as I hadn’t really considered that too much – we’re combining sci-fi, fantasy, and particularly horror tropes in ways I figured I hadn’t seen done before, so I suppose the outcome might read somewhat surreal to some. I hope the book’s also a lot of fun; I think there’s a lot of very old school vaudeville comedy in the mix of its makeup, particularly with our main double act.

Dani Strips: All the projects I’ve worked on until now have been relatively different from each other, at least visually.

From complete Sci-fi 2000AD stories to one of the latest which was the Western “The Girl With No Name” and everything in between, every comic I’ve worked on was unique in its special way, and I like to consider myself lucky that I got to try new things.

“Coffin Bound” too has a totally unique tone compared to my previous works, but is particularly special to me because of the amount of involvement I got to have in each part that I might not have had in other work-for-hire stories.

Being able to discuss the whole thing from scratch with Dan and not just receiving a script whenever it’s ready makes “Coffin Bound” a really personal project.

The series has been described as set in a “dark, twisted fantasy world.” What can you tell us about the setting, and what sort of things we might encounter there?

DW: The world of “Coffin Bound” is rusted, rundown and broken in just about every way…. the way our own is starting to feel, frankly. There are plenty of factions trying to get by and survive in their own ways, to eke out lives in an entropic world. We’ll be exploring some in this arc, and merely glancing off others. We’re not leaning too hard into the fantasy and sci-fi elements. They’re there, but the plot remains pretty grounded – Izzy and Vulture et al. are scrabbling in the muck of the earth, and there’s no article of wonder that’s going to release them from that.

There are strange rituals and tech aplenty, however, so get ready for easy-gro skin, on the fly plastic surgery that Doctor Frankenstein might have been proud of, and an unstoppable totemic monster or two.

DS: “Coffin Bound” is set in a “dark, twisted fantasy world” indeed but if you check closely I think it’s not that far from our reality. In fact, it ended up being set in a world where there is no specific time or place – yes it has a lot of American-like sceneries and settings but you could say that nearly every place in the world could look like that after a long-gone devastating war or an environmental destruction.

Then there are some objects that you can place in time such as a typewriter or a folding cell phone with a small antenna but again, the comic’s timeframe is neither the 60s nor the 90s… or it could be? Everything seems familiar and unfamiliar in the same time.

It’s the same with the characters you will encounter in that world. Their actions and reactions, their thoughts and wants and angsts could fit in any “today” you chose to put them into -although there are some pretty weird situations and stripping scenes in there to expect!

And I don’t think Dan and I planned all of this rather than it flowed organically through us towards this direction in the end.

The content, both from the story and the art, brings to mind the grindhouse films that were most popular in the 1970s. Are there any films or comics of that style that particularly influenced this work?

DW: Faster, Pussycat! Kill! Kill! was brought up a fair few times in conversation. As was [The] Rocky Horror [Picture Show], though that’s not really Grindhouse- it just lives in that same wheelhouse of 70s shock and shlock. We wanted to work with those kinds of styles and use them as a springboard to talk about other things. I was talking about “Coffin Bound” recently with someone and the description came out as “using all the influences Tarantino does and combining them in exactly the way that Tarantino wouldn’t.” I quite like that, and it’s probably quite accurate.

DS: This is definitely something that we had in mind actually! Dan and I were clear from the beginning about the aesthetics of the book and we were mostly inspired by old movie posters. I really can’t name any because they were so random and so many. I know for sure that we started off from Faster Pussycat! Kill! Kill! and then we were unleashed into the depths of the wide web. We would just send to one another pictures and articles that we would find online all the time and one brought the other and this is how “Coffin Bound” was born.

Where did the initial idea for “Coffin Bound” come from?

DW: We wanted to make an “us” book, that was the kind of thing no-one else could make, and that each of us would or could only make with the other. We wanted to make something fun, and furious, and manic, and also something that tried to talk about grief, mortality and poor decisions. I knew that after Caspar Wijngaard and I did “LIMBO” I wanted to take another genre and slam it against a certain form of existentialism, so plotwise it came a little from that. I was reading a lot of Timothy Morton and Graham Harman’s philosophy at the time, so wanted to do something ontological. You don’t get too many funnybooks with ontology at the centre of their plots, from what I’ve seen at least, so I figured the world might be able to handle one more.

DS: I think Dan had seen a drawing of a girl that I had made and liked it a lot and I don’t know what weird thing it triggered in his mind because when he came back to me with a draft outline of a whole story around this girl and we started putting bits and pieces here and there and finally he put the whole thing together like the great magician that he is and boom! “Coffin Bound!”

Other than that, we would spend hours on Skype talking about our lives and our thoughts and stuff that we worry about and things that we have done or have happened to us and this played its part too. I guess we wanted to make a book we would both really enjoy.

For Dan Watters: Dani’s done covers for “Deep Roots” in the past. Was it her work on that series that led you to approach her for this?

DW: It was more the other way around. Dani and I knew we wanted to work together by that point, and Vault Comics were doing a wonderful initiative last year where every book they released had a variant cover by a female artist. When they asked me who I wanted for “Deep Roots”‘s covers, Dani was the first and obvious choice. She did some amazing covers on that book, and it was great to develop a bit of a creative rapport before we dove into making our own book.

For Dani: What inspired your art choices for “Coffin Bound?”

DS: As I mentioned before, Dan and I had a great back and forth of images, videos, articles, movies etc, all of which were a great source of visual influence. So yes, most of the art choices in “Coffin Bound” come from old Grindhouse movie posters, strange articles about shamanic tools or tribal masks or stuff like “The 10 Deadliest Birds in the World,” but other times it would just be something that Dan would have written in the script or the outline, just one word that would create this image in my mind straight away. I really can’t explain it properly, but some things just explode images in my mind!

At this point I would really like to talk about Brad Simpson’s art choices as well, because he was given total freedom with everything and absolutely nailed it! Like for example, if you look closely, Eartheater has one green and one red eye and I guarantee you that none of us ever gave these directions to Brad!

And lastly, is there anything else you two would like readers to know about “Coffin Bound?”

DW: This book is a passion project- Dani, Brad, Aditya, Emma and I have been sweating blood over the damned thing for about a year now, and I won’t speak for the rest of the team, but it’s exactly the book I wanted it to be. I hope it’s unlike any comic you’ve read of late. I hope you enjoy it.