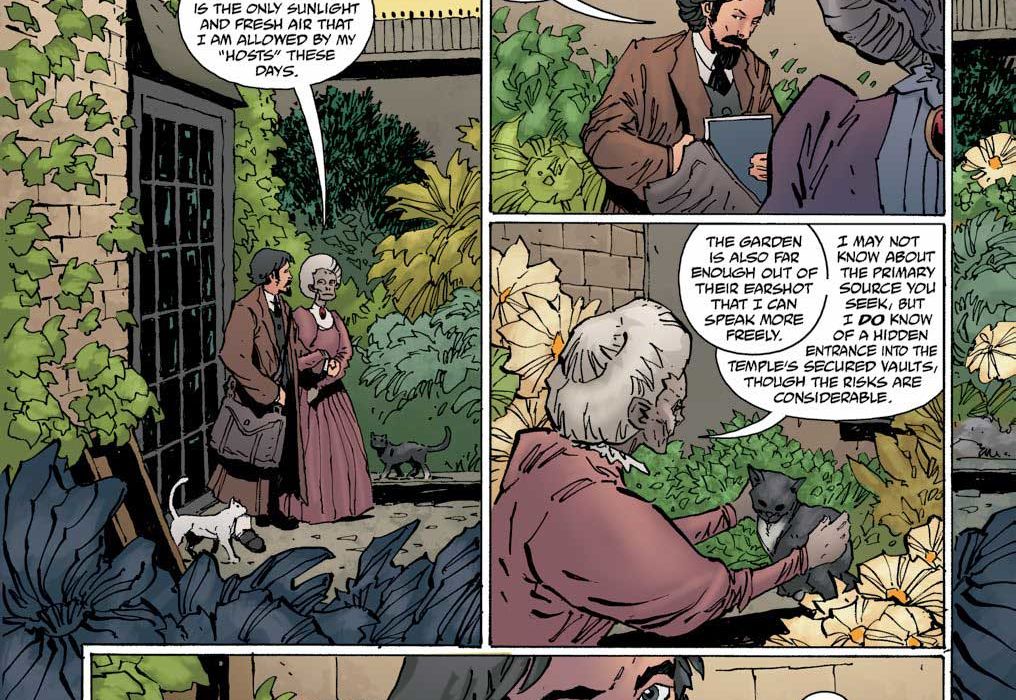 Welcome to Mignolaversity Debrief, our column where we explore the latest stories from Mike Mignola. This time we’re discussing “Witchfinder: The Reign of Darkness” #3 with writer Chris Roberson and artist Christopher Mitten. If you missed our previous debriefs, here are links to #1 and #2. 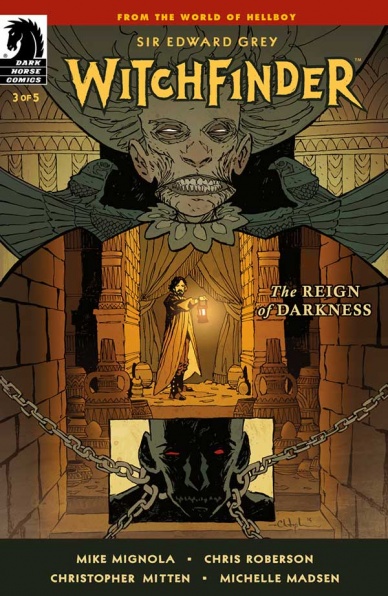 I love this cover. Given that all five covers for this arc have been revealed now, do you mind telling our readers a bit about your process on these?

Christopher Mitten: It’s all pretty straight forward, as things go: do a few thumbnails of different concepts and layouts, wait to get everyone’s feedback on which design works best, then, once that’s settled, it’s just a matter of hopping to pencils and inks and colors.

Sometimes, in thumbs, there are a bunch of wildly different ideas bopping around and you kind of toss them out there to see if anything works, but for this one, I had a fairly concrete idea of what I wanted to try once I’d read Chris’s script. His writing always offers a lot of wonderful imagery from which to pull, so that’s never an issue, but here… here we get Panya. She’s a terrific character in terms of the world of the book, but also from a design standpoint. She’s a knockout, and I knew I wanted her to feature prominently.

I did three quick thumbnails but, in a bit of an all-eggs-in-one-basket scenario, they were really just variations on the image that popped into my head as soon as I finished reading the issue. I’m just happy it seemed to click with everybody. 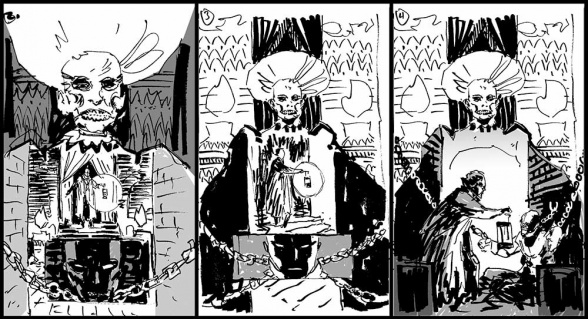 Of the five covers, this, I think, is my favorite. This or issue four; I flip-flop.

There’s a section in this issue when Sir Edward Grey has to sneak into the Universal Temple of the Heliopic Brotherhood of Ra, which is largely dialogue free. How loosely is something like this written in the script? Is there much back and forth as it goes to layout?

Chris Roberson: I typically focus on the physical movements of the characters in the panel descriptions, where they are in the scene and what kind of posture or expression they have, and leave decisions about the layout to the artist in most cases. In this instance, the descriptions were pretty sparse, and I trusted that Christopher would be able to make it work without any unnecessary dialogue. 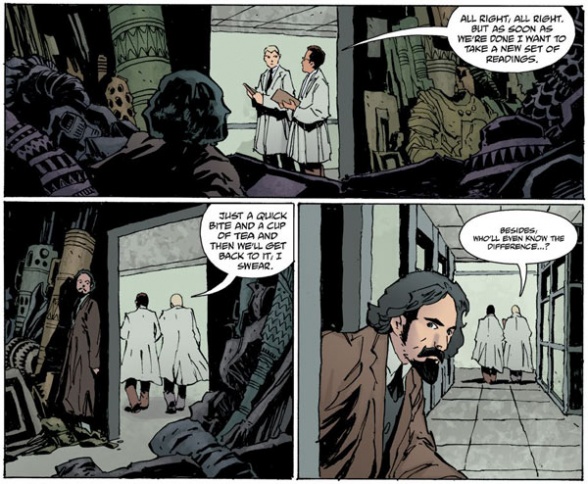 Christopher M.: Scenes like this are always a lot of fun. It’s just pure storytelling. Chris and I don’t get to lean on dialogue for support. When Chris writes it’s always clear what’s happening in the script—I can see so effortlessly in my head—so it’s my job to make it equally so when I’m drawing, to not muddy it or make it choppy and confusing.

Also, after all the work Chris and I have done together over the years, and with Mike there and our editors, Katii O’Brien and Jenny Blenk, there’s a comfort in knowing what everyone wants from a scene, any scene, and how it to best make it flow. Everyone’s on the same page, in the same headspace, and it’s a really nice place to be creatively. 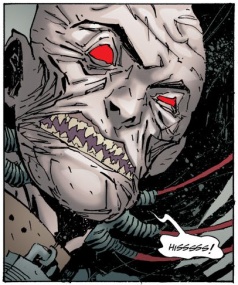 In this issue vampires come back into play. I’m curious, from a writing standpoint, what it’s like writing vampires in Mike Mignola’s Hellboy Universe, where so much about them is still a mystery and their mythology is unfolding on so many fronts. Most recently, in “B.P.R.D.: The Devil You Know,” we saw their demise and in “Hellboy and the B.P.R.D.: Saturn Returns” we saw a man turned into one of the ancient pre-vampires, the cold people. More “B.P.R.D.: Vampire” is still planned, and we know the Bureau had several run-ins with vampires in the 1960s, ’70s, and ’80s, even if those stories haven’t been told yet. How do you navigate all that? And what’s it like to add to this collaborative mythology with Mike Mignola, Scott Allie, Gabriel Bá, and Fábio Moon?Continued below

Chris R.: As always, it’s a little daunting. When we first talked about using the vampires in “Witchfinder: City of the Dead,” there was a fair amount of discussion about exactly how vampires work in the world of Hellboy, what happens to them when they are killed, and so on. We played around a little bit with the cold people in “Witchfinder: The Gates of Heaven” without ever coming out and saying that was definitely what was on the page (but the priest in chapter three who attacks the two flower women had most definitely been turned into a Victorian version of one of the cold people). In many ways, though, I tend to think of the different eras and settings as fiefdoms, and the Victorian era is the one that is primarily my responsibility. Gabriel and Fabio’s ‘Vampire’ stuff is their fiefdom, and I wouldn’t dream of setting foot it in without an invitation, while the cold people stuff is under Scott’s purview.

Of course, the other big player is Hecate. She’s been showing up off and on in the Hellboy Universe ever since 1996’s “Hellboy: Wake the Devil,” usually to give Hellboy these lofty speeches about the end of the world. But the thing is, Sir Edward’s relationship with Hecate is very different from Hellboy’s. When Hecate speaks to Sir Edward in the epilogue of “Hellboy: Darkness Calls,” it’s much more personal. There are barbs in her dialogue that speak to how well she knows him.

So when you’re working on ‘The Reign of Darkness,’ you’re laying the groundwork for this relationship. In this issue Sir Edward mentions how he feels dogged by Hecate since his first encounter with her four years ago, and I feel bad for him. Imagine how he’s going feel a hundred and thirty years later.

Chris R.: It’s definitely something that we’ve been talking about since the beginning, and that is going to continue to be slow-burning in the background through the rest of Sir Edward’s career. And with ‘The Reign of Darkness’ we definitely wanted to build on those glimpses of that, for lack of a better word, relationship between the two. Things like the Heliopic Brotherhood are always going to be more immediate demands on Sir Edward’s attentions, but there is a slow drumbeat of menace with Hecate for him. We’re careful not to overplay it, but the last time that we’d really touched on it was in ‘City of the Dead,’ so it seemed like it was time to bring it back to center stage again. And clearly, this is not the last time that Sir Edward will encounter Hecate as time goes on.

The other aspect of this is that you’re working on this story backwards. We’ve already seen the last time Hecate and Sir Edward Grey speak to each other. Now, according to way too many random pieces on the internet, prequels are bad, they never work, and then some angry grumbling about Star Wars, The Hobbit, Fantastic Beasts, or whatever other blockbuster film franchise has done them wrong.

And yet, in an odd way, the Hellboy Universe is kind of built on prequels. It’s doing them all the time and they’re really damn good. Why do you think that is?

Chris R.: My instinct is that the difference with the Hellboy Universe is that while the stories we’re telling are technically “prequels” because they are set in the past, they seldom if ever do the thing that prequels so often do of explaining things in the background of stories that we already know. And since the audience already knows the original story and how it ends up, the prequel can sometimes feel a little superfluous. But the stories that we’re telling are more like period pieces, that just happen to take place in this fictional history instead of our own (or rather, in a history that is very, very much like our own with the addition of bits of supernatural menace in the shadows). We occasionally link back to things established in previous “Hellboy” or “B.P.R.D.” stories, like exploring exactly what happened between Sir Edward and Giurescu, but even in those cases all that we originally knew about the incidents to begin with were cryptic references and casual asides.

Christopher M.: Exactly; yeah. I think that’s why these stories work as well as they do. There are all these little cracks and alleys to be explored and ideas to be expounded upon, all these new stories and new characters often brought into being by, like Chris said, a character’s tossed-off comment or a tiny glimpse of some mysterious image. It never feels like we’re being led around over well-trod territory, perfunctorily connecting dots because we have to get from here to there. They don’t feel rote. They don’t feel like tales told out of obligation. And because of that, they’re fun to read, and, happily, also fun to make. In the end, a win-win.

You can find Chris Roberson on Twitter and Christopher Mitten on Twitter and Instagram. We’ll have more debriefs next month, but none for “Frankenstein Undone,” I’m afraid—everyone’s schedules are too busy for the moment. We’ll try to check in on that miniseries after the final issue though. 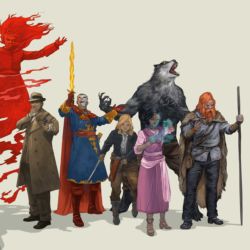