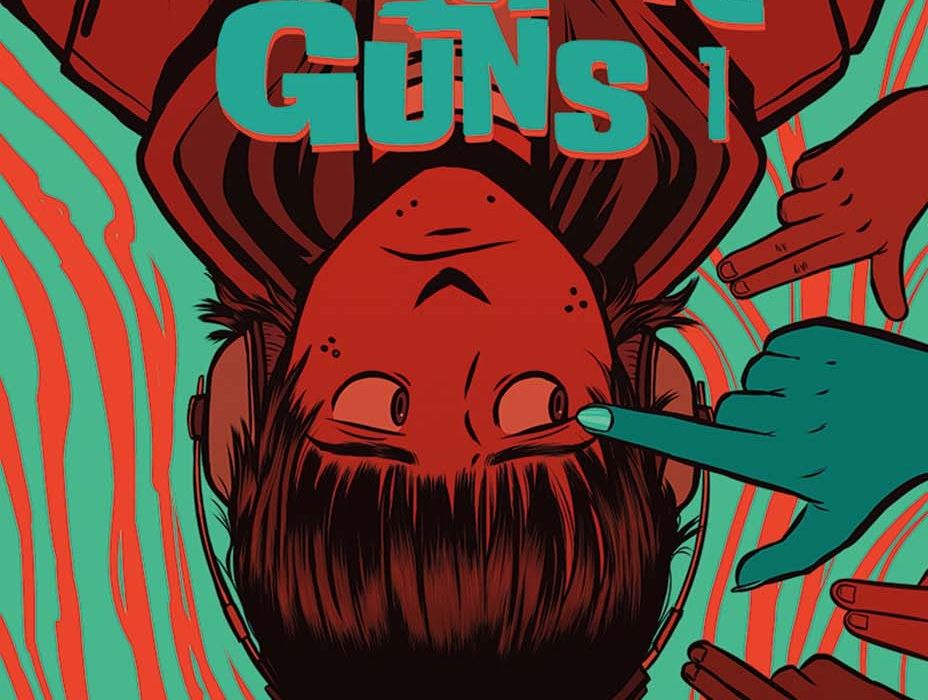 “Finger Guns” is a new series from Vault Comics that promises to take the titular, innocuous hand gesture and make you think twice about its possible power. But the story is about far more than just going pew pew and having something actually happen. We sat down with writer Justin Richards to discuss the series, its themes, and to give you all a taste of the new series who’s first issue drops February 26th. . .Oh wait, that’s today! If you’re still on the fence after the interview, we’ve got a preview of the issue below. Give it a nose.

Thanks again to Justin for answering our questions and Vault for the preview!

We’ve all made finger guns at some point in our lives, for a variety of reasons and with a variety of intentions. For me, YuYu Hakusho’s use of finger guns is the template of its power and meaning, and this is a little embarrassing, but I used to imagine having those powers and would pretend to do the kinds of things Sadie and Wes do. For others, it’s that Urban Dictionary definition. What was it about this gesture that drew you to making it the focal point of the book, so much so that it’s the title?

Justin Richards: I’ve used finger guns a lot in my day and that may be why it was the symbol that was used in the dream I had that inspired this story. As the development has gone on it’s definitely proven itself as a symbol to mean many things. My use of it in the past has usually been as a greeting, farewell, or a wink of sorts. All of these are innocent things that are changed the second you make it any more literal than its original intention. It’s the power of this versatility that made me decide to stick with the finger guns as our driving symbol.

On that same note, there’s playfulness in the book to the way Wes and Sadie use their powers that makes them feel like teens, which is often quite hard to portray. Wes’ initial run through the mall or that two page spread in issue #2, they’re plot relevant but take their foot off the gas to really sink into the silliness of the concept, and how these characters would handle it, without being dismissive. Do you see this as a companion tone or idea to the larger ones at play or is it a necessary component of the rest that is often overlooked?

JR: I find the playfulness that we use in the book to be necessary for taking breaks between the heavier themes and moments that we have, of which there are plenty. I’m also just a silly person, so it comes through in my scripts.

If you were to boil down the central conflict of “Finger Guns” to an “Anna Karennena” quote, why would it be “all happy families are alike; each unhappy family is unhappy in its own way?” I promise these all won’t be leading questions.

JR: You’ve certainly struck a core theme of “Finger Guns.” We explore this through Wes and Sadie, who both belong to less than happy families. They’re both in troubled homes, but for very different reasons. It’s the attempt to control such things that will truly become our central conflict.

Taking a step away from the thematic, it’s clear the power sets of Wes and Sadie have a logic behind them, and I have my theories on why Wes’ is anger, Sadie’s is calmness, and why some people don’t seem affected. Without spoiling too much, can you talk on the thinking behind how they work, how they manifest, etc.? Or, if that’s too spoilerful, what’s the process of crafting the logic and working it into the issues? What’s your philosophy for powers based exposition?

JR: In regards to the powers, Wes and Sadie are actually both capable of the same things. They just discover their powers in different order because they’re people who use different style finger guns in their day-to-day routines.

As for working them in, my philosophy revolves around minimal amounts of exposition without leaving any inconsistencies. I really want to trust the readers to follow along without holding hands more than necessary.

Let’s talk your artistic collaborators for a sec because what’s a comic without them? They’re really bringing their A game to the comic, in particular, I’m thinking of the page where Wes has just had Sadie test her powers on him. It’s a powerful page that does a lot tonally, plot wise, and emotionally. How’d the team come together and what was it about Val’s art, Rebecca’s colors and Taylor’s lettering that made them a great fit?

JR: This comic is nothing without my amazing team. We’ve all been on the same page from the get go. Val and I have been completely in sync from the get go and everyone understands the emotional tone we’re going for and they’re all some of the best at what they do. It’s been a great experience working with all of them and I hope I get to keep working with them throughout my career!

When working with Val, did you model any of the finger guns faces and poses to get the energy just right?. . .Maybe I should rethink my phrasing on that one but whatever.

JR: Val hasn’t made me do any modeling thus far. He’s been taking his own reference photos and just nailing everything I’ve written. I did do 1 terrible drawing for him that I think was helpful. 😉

When you’re scripting, how much detail do you go into in regards to the page and panel beats? What’s the flow you like to establish page to page, issues to issue?

JR: I like to think my scripts are pretty loose. I like to trust my artist to know more than me when it comes to layouts and design of a page 9 times out of 10. I do write a (mostly) set number of panels and descriptions for each panel, but not usually too much detail unless it’s a more action heavy sequence. Val is really good at understanding what I’m going for, which I’m sometimes shocked by.

OK, final question. Right now, the story is very focused on Wes and Sadie and the external events that shape their internal lives. Is the cast going to expand at some point or will it remain intimate, even though the two are not mutually exclusive?

JR: Both! We do expand our cast a bit as we go, but Wes and Sadie are definitely the heart and soul of this book and they will be our focus. Thanks for reading!! 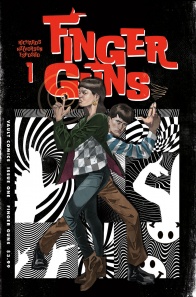 Cover by Tim Daniel
Written by Justin Richards
Illustrated by Val Halvorson
Colored by Rebecca Nalty
Lettered by Taylor Esposito
Two troubled teenagers discover they can manipulate emotions by firing Finger Guns. There will be laughs. There will be tears. There will be uncomfortable teen feelings and angst. Oh yeah… and chaos. So much chaos. 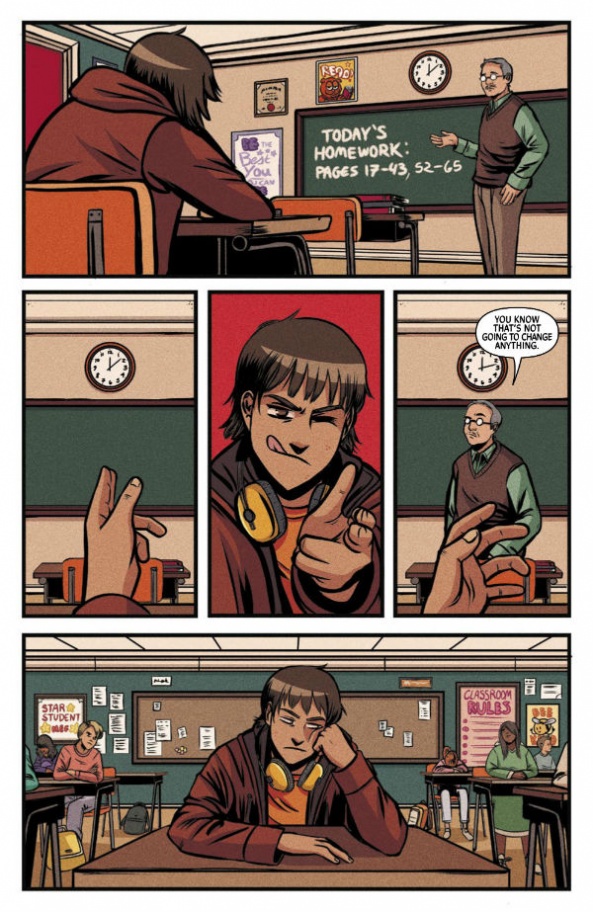 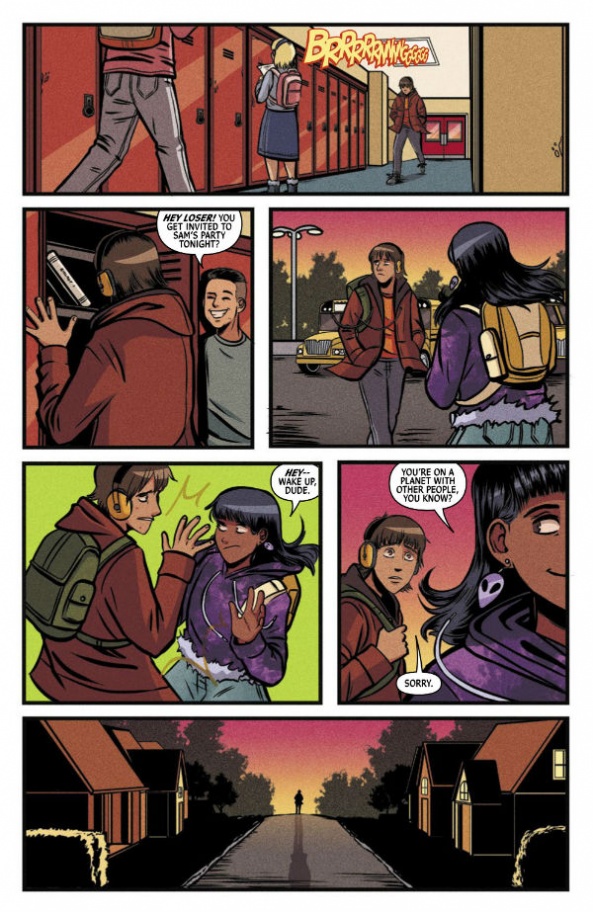 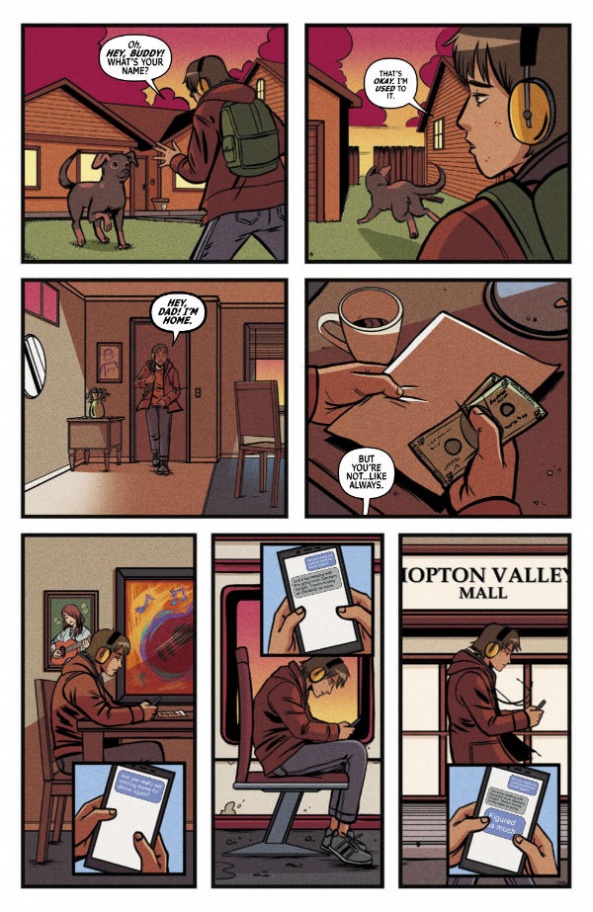 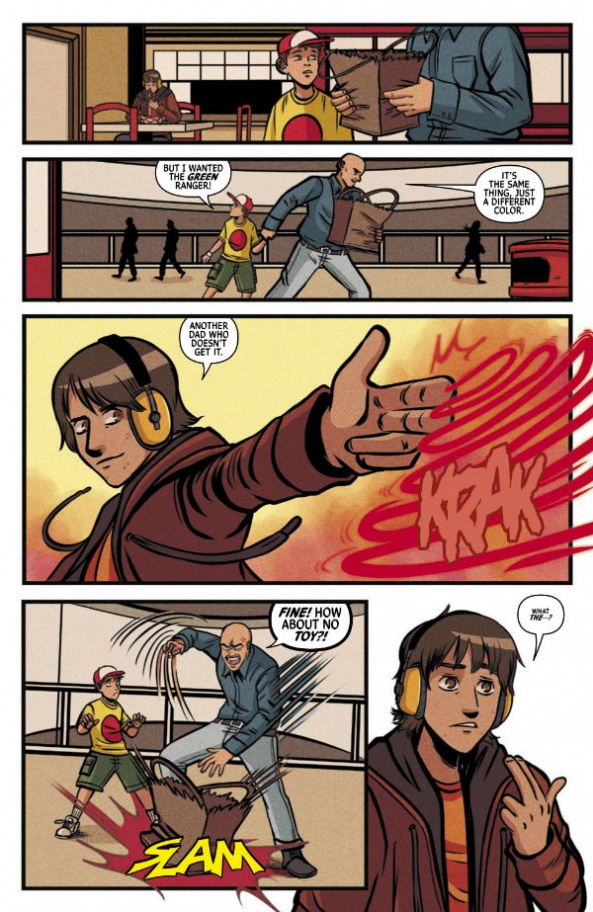 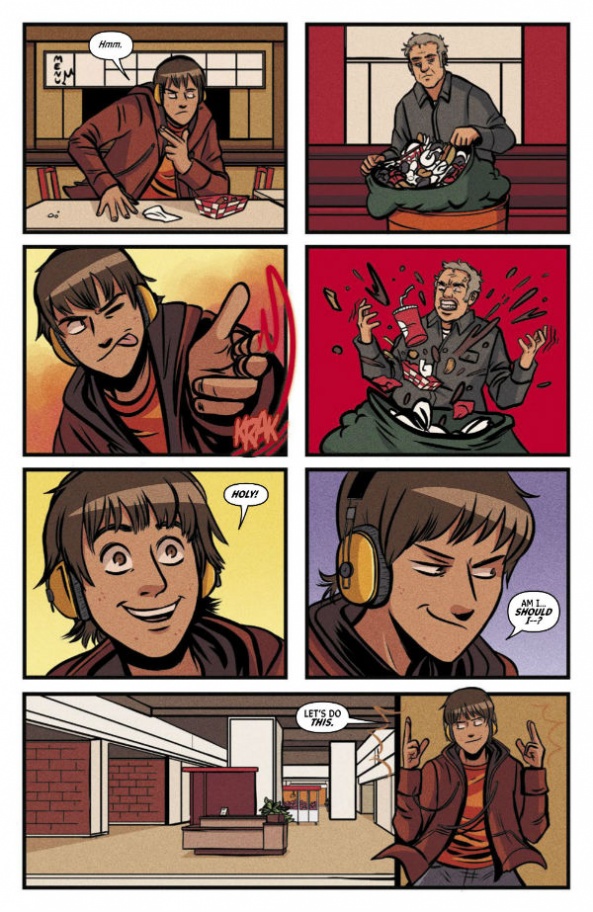 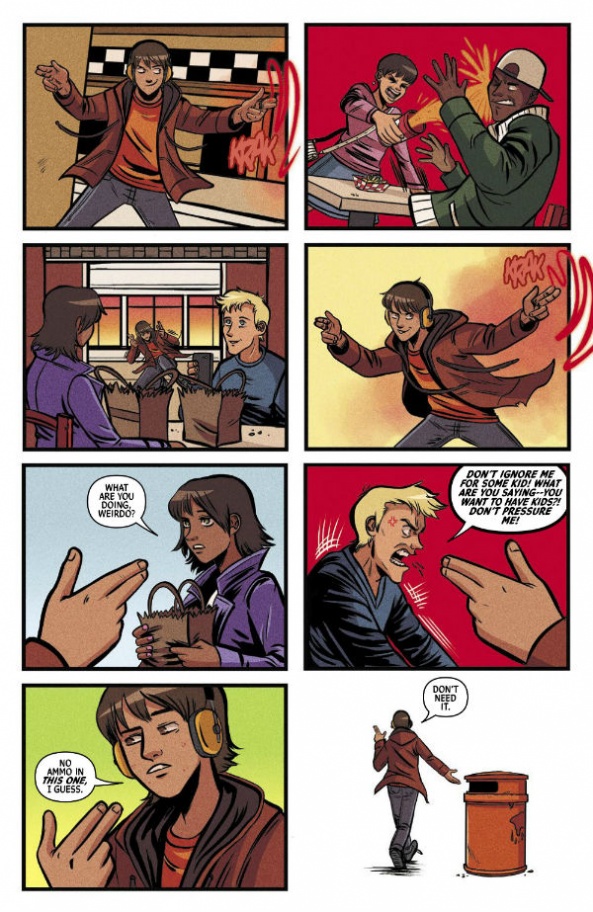