Knowledge is power, as the old saying goes. That includes the power of destruction, the power to cause social collapse.  From Brave New World to the American Library Association’s list of most frequently challenged books, a book brings that knowledge to the reader, but it’s up to that reader to act on that knowledge.  Welcome to the world of “The Last Book You’ll Ever Read,” centered on a book (and its author) that is so shocking, it’s leading to the destruction of the social order.  A horror story like this could only come from the pen of comics horror master Cullen Bunn, known for the complex, layered horror of “Harrow County,” “Brothers Dracul,” and much more.

Cullen sat down with us for a chat about what to expect from this new series, which sees its second issue drop tomorrow – – and we have an exclusive preview of that issue at the end of this interview.  Our thanks to Cullen and Vault Comics for their time, and be sure to pick up issue #2 (and issue #1 if you missed it) digitally or safely in your comic shop of choice tomorrow!

This is a story that starts with a book so scandalous and provocative it drives civilization to the brink. Is there a book in your mind that would be our real-world equivalent of Satyr?

Cullen Bunn: Let’s face it. Almost any book can be dangerous when you throw misinterpretation, misinformation, and second-hand understanding into the mix. And the more popular the book, the more potentially dangerous it becomes. But the closest inspiration I have for Satyr would be fictional works such as Sutter Cane’s novels or the play “The King in Yellow” and the real world fervor over books that certain groups deem blasphemous or sacrilegious. The passion or vehemence that can rise from words, even in those who have never read those words, is fascinating and frightening to me.

While this is an apocalyptic story, it takes a different interpretation of the word “apocalypse” – – not a destruction of the world, but more of its classical Greek roots of revelation. Thus it’s no surprise to me that a book is at the center of this story since the literal Greek translation of the word is “from cover.” How do you plan — without spoiling too much — to combine both of these definitions of apocalypse into this story?

CB: Like the written word, the apocalypse, I think, is open to individual interpretation. What might seem like the end of the world to one person, might be a non-event to someone else. In THE LAST BOOK YOU’LL EVER READ, we’re seeing this rebirth of sorts, this change in the world. We’re also seeing some very different reactions to those events. Olivia Kade’s book is the focal point, because different people see the content differently. Sadly, in Olivia’s case, almost all of them want her dead.

Continuing on this thread of Greek mythology, the satyr – – the creature that lends the title to Olivia’s book – – actually has its roots in bawdy humor and parody of tragedy. Are those elements we might see in future issues, or will this straight up lean into the horror and supernatural?

CB: Certainly less humor and more horror in this particular tale. The symbology of the satyr is important to the story, though, as you’ll see as the story progresses!

By the end of the first issue, we certainly know a lot about Olivia, but not enough about Connor, the security guard hired to protect her as she prepares for her book tour. Is there something you can share with us that will help us to get to know him better for issue #2 and beyond?

CB: We’ll be digging into what makes Connor tick more and more in future issues. He’s sort of a by-the-books kind of guy. There are rules he follows. He likes to stay in control of his actions. This, though, will not necessarily play well with what is going on in the world around him. How can Connor stay “in control” when everything is collapsing around him and everyone is giving in to their more feral instincts? This struggle will be central to his character.

CB: Haha! Oh, I know why she wrote the book, and I’d probably suggest it is not the reason most readers think at this point. The words “lightning rod” spring to mind. The discovery of Olivia’s intentions, though, are a key part of the story ahead.

In the launch announcement of the title, artist Leila Leiz looked to old Hollywood to create the look of this world. What other influences did you look to in order to create this world?

CB:  I looked toward a number of quiet and surreal horror stories as well as more than a few end-of-the-world tales. Even though this comic is not necessarily “quiet” and it gets more and more “loud” as the tale progresses, I wanted to root the story in a world that feels very real. This is our world. That, hopefully, makes the sudden and shocking changes taking place seem both realistic and strange at the same time.

You are quite possibly the busiest man in comics these days, making your mark in horror, but also work for Marvel and DC. What’s brought you the most joy – – the licensed properties at Marvel and DC, or the creator-owned work? And for someone as busy as yourself, how do you stay motivated without suffering burnout?

CB: In the last several months, burnout and depression have been hard to hold at bay. Once upon a time, I would have said, “You just have to write through it.” But I’ve changed my tune somewhat. These days, I look for those moments–sometimes fleeting–when inspiration and motivation strikes, and I just make the most of it. My productivity levels are probably less than half what they once were. I hope I can get back to where I was, but I have to take care of my own mental health as best I can.

As for licensed properties versus creator-owned work, it really is no contest. I love writing stories about the characters I loved as a kid. I love contributing to those established universe. When I do, though, it’s rare that I’ve been able to really cut loose and do what I’d want with them. After all, those characters belong to a company, and the company has its own guidelines for what they want to happen. With creator-owned comics, that shifts a great deal. These are the stories the creators want to tell, unfiltered, told in the way the creators want. There’s power there. That’s where the best stories come from, hands down.

Outside of this title, what other upcoming work should we keep our eyes out for?

CB: I have a ton of creator-owned work coming out right now. If you like THE LAST BOOK YOU’LL EVER READ, you should most certainly check out LUCKY DEVIL and BASILISK and PHANTOM ON THE SCAN. I have new HARROW COUNTY stories coming out. And there are several unannounced projects coming along soon. I’m also writing SHADOWMAN for Valiant, and it is a dark horror superhero story you don’t want to miss.

Olivia Kade’s cross-country book tour kicks off and is immediately met with resistance. The public lashes out against her treatise on the collapse of society, and it is Connor Wilson’s job to keep her safe. As events surrounding the tour grow more violent, more surreal, and more horrific, Connor can’t help but wonder — is Olivia’s book bringing about strange changes in the world? 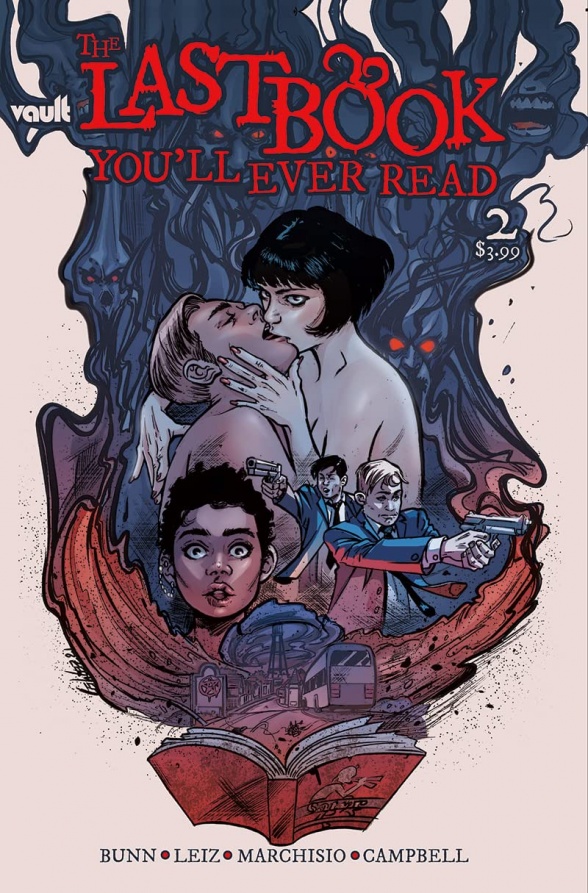 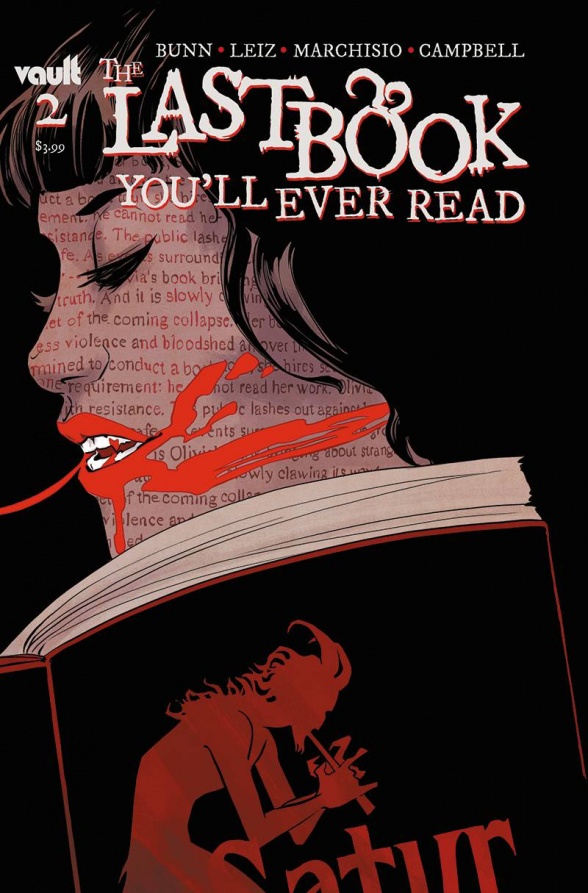 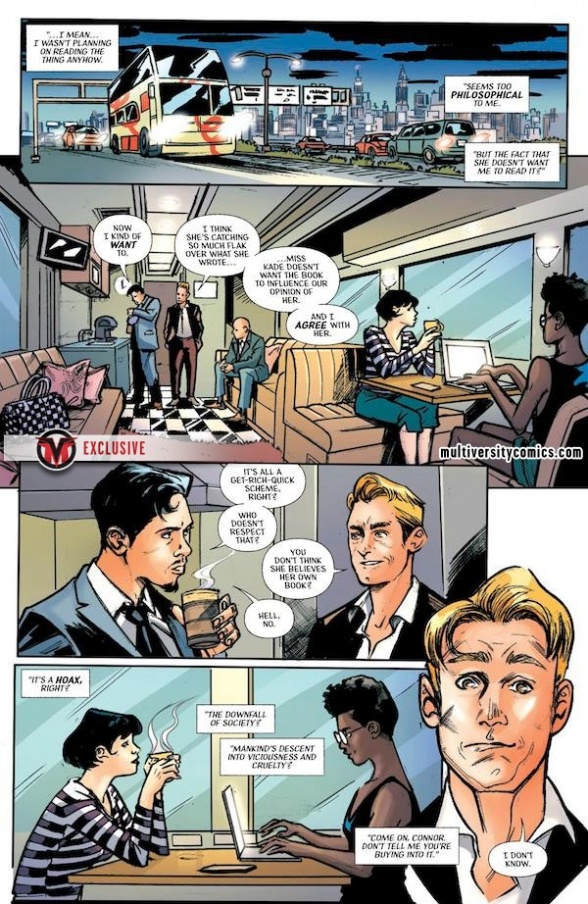 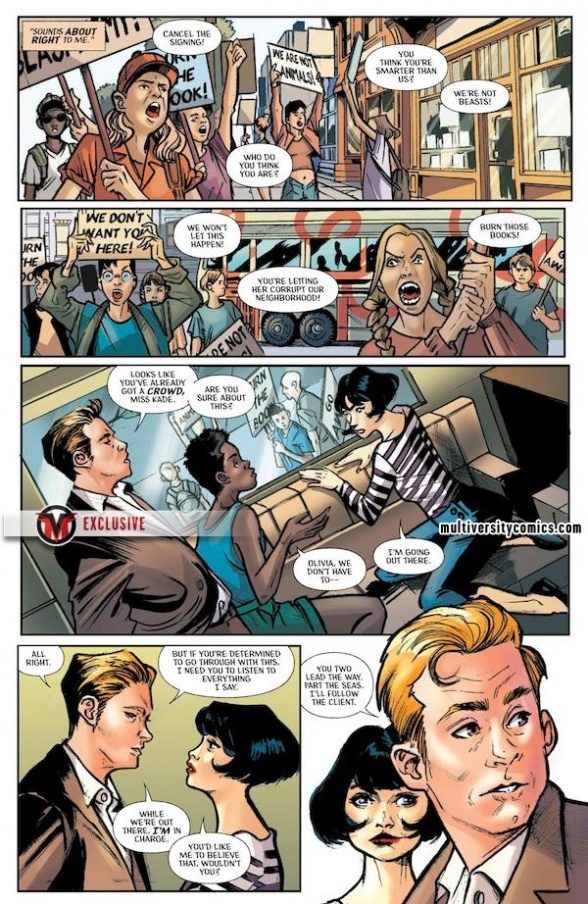 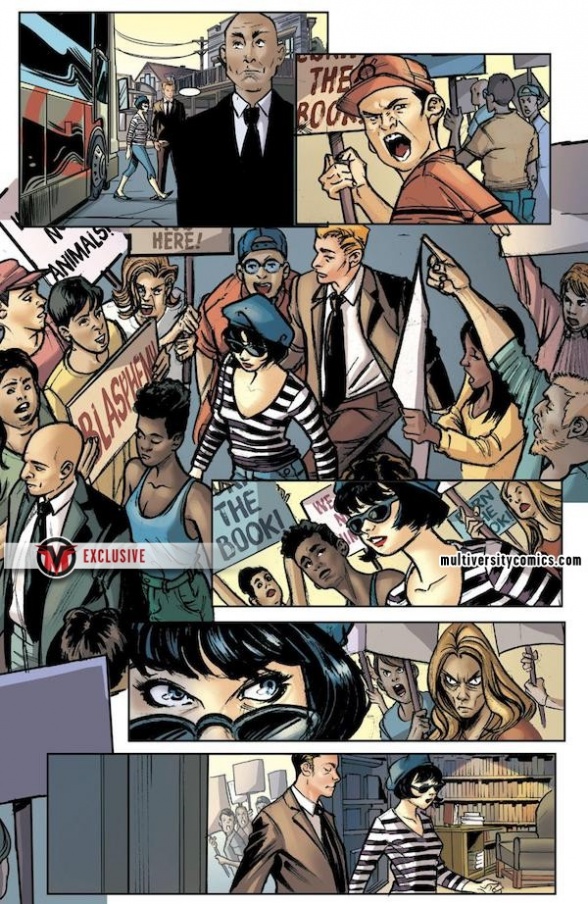 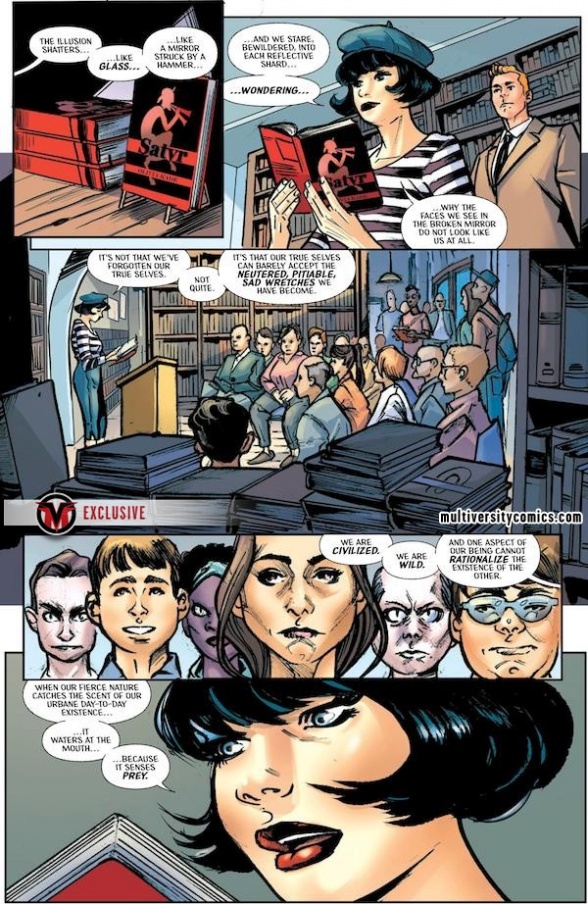 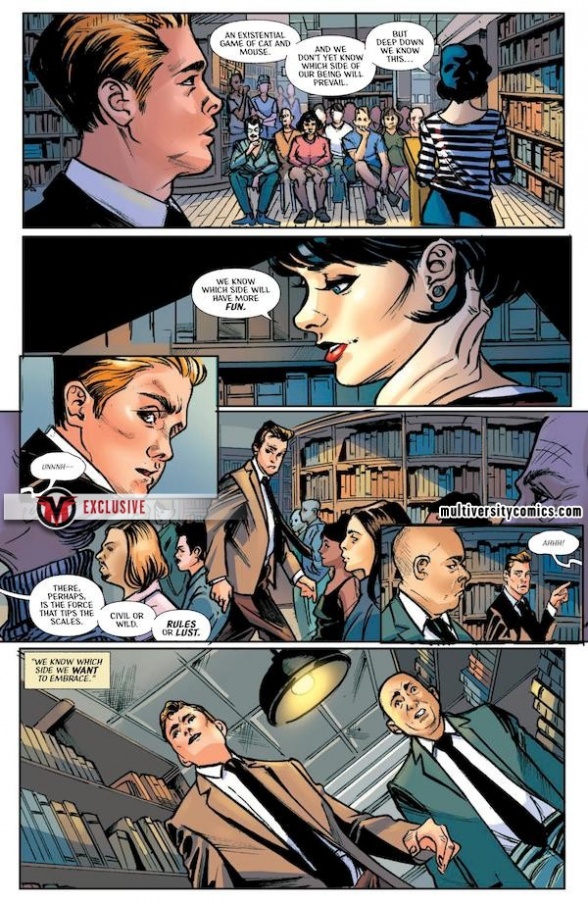 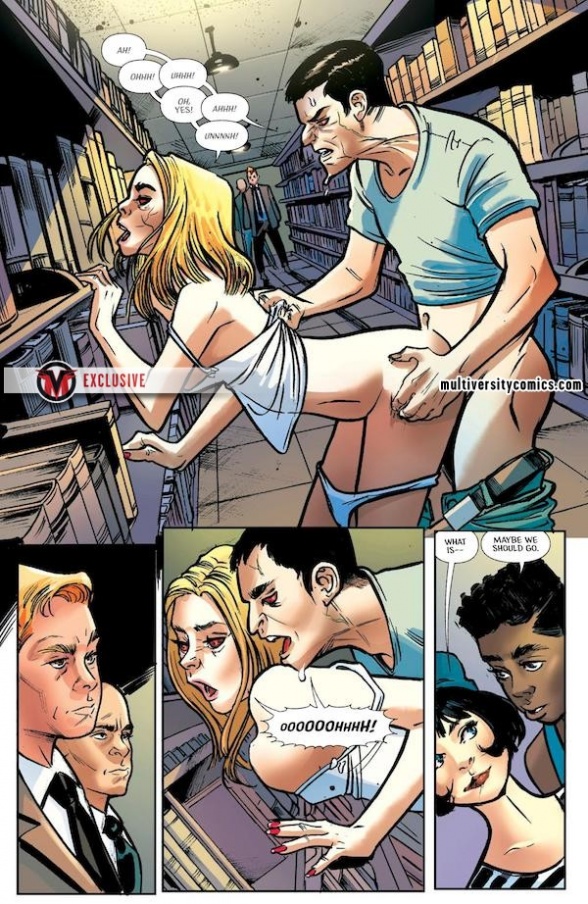 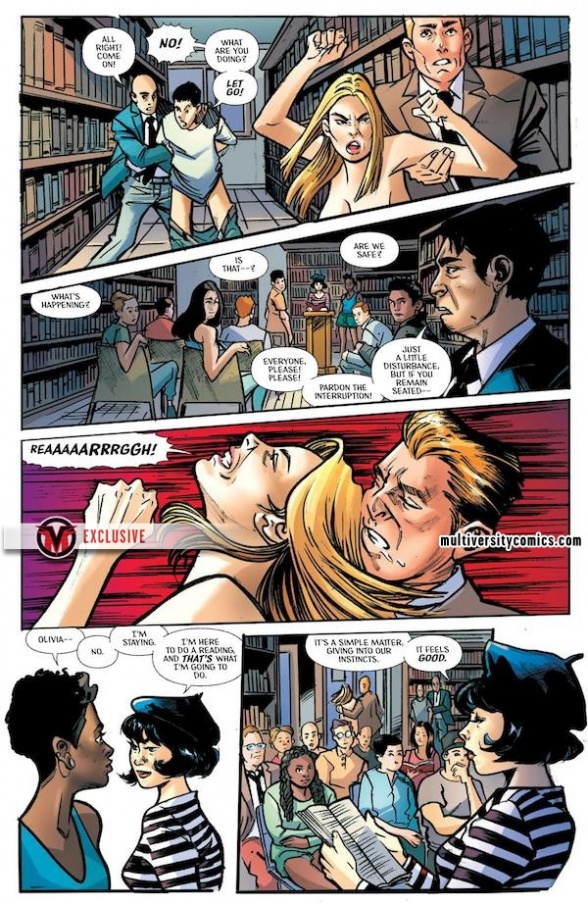