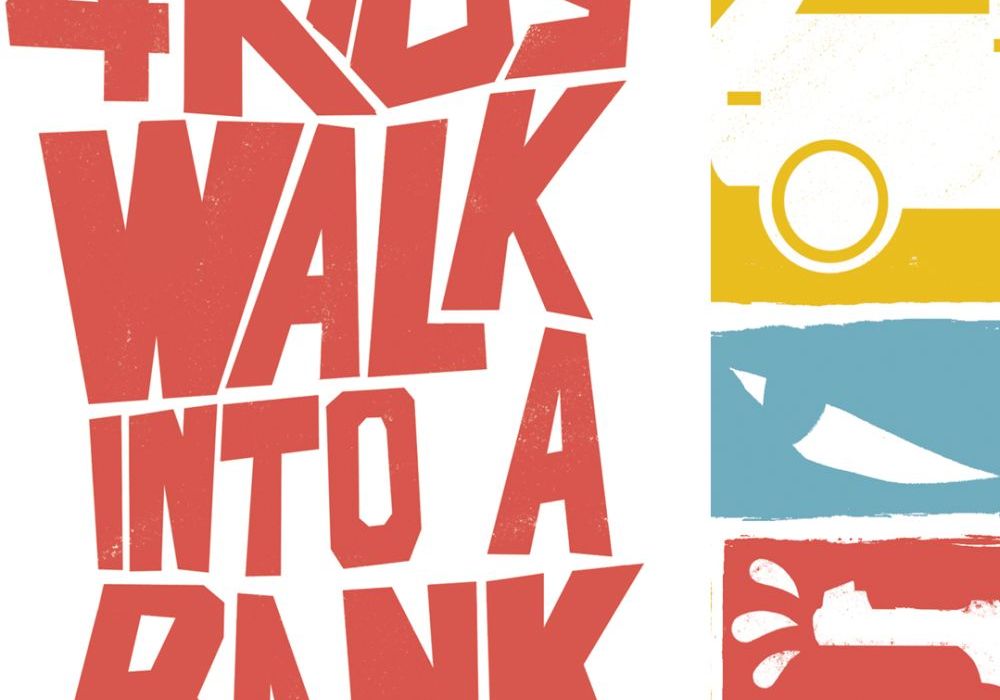 Last week, you may have seen our pretty prositive Pick Of The Week review for “4 Kids Walk Into A Bank”, the new comic from Tyler Boss and Matthew Rosenberg about a group of kids caught up in a world of violence and crime. Spoiler alert: I pretty much loved it.

Following that, we got the chance to talk to Matthew Rosenberg about the series, its strong characters, its gangster film influences, and, most importantly of all, Dungeons & Dragons.

First of all, thank you, Matthew, for taking the time to speak to us about “4 Kids Walk Into A Bank”. This is a comic I’ve been looking forward to since I first heard about it and I think a large part of that is actually the title, which is something you seem to have a knack for.

It’s certainly a title that sums up a core of what the books about while only scratching the surface of what it’s really about. Between this and “We Can Never Go Home”, is a good title something that’s important to you when writing a story?

Matthew Rosenberg: If you asked me a few months ago I would say titles don’t matter to me at all. I wish I could just call things “Boss Mauer Rosenberg Comic #1” or something equally as dumb, just to not have to think about it. That’s why my books have kind of annoying, tongue-in-cheek titles. I don’t care that much for myself. But I do think it makes them stand out a bit on shelves and that is helpful. So yes, what started as a joke is now probably my career plan going forward.

This first issue opens up with a sequence I really loved of the kids playing Dungeons & Dragons. It felt like a good balance of having fun while introducing the kids, who are all very disparate personalities. What was it like trying to dig into the voices of the kids?

MR: I am very much a writer who really gravitates to strong characters. I tend to know, no matter how small the part, who everyone in my story is. And when you think about things that way having the characters have unique voices isn’t something you really need to work at. I spent a lot of time thinking about those 4 kids and imagining them early, so when it comes time for them to speak that just happens really naturally.

“4 Kids” is a comic that wears its influences, particularly gangster movies, proudly on its sleeve with references to Goodfellas and Pulp Fiction even before you hit the first page. Were these influences something that you knew were going to be a part of the book from the start?

MR: Yeah. Both Tyler and myself started the book with a strong sense that it would be a love letter to a lot of things we care about. As we went on, more and more of that seeped into the book. I don’t think it was intentional, we just get really excited about sharing influences with each other, trying to slip nods and jokes about them into the book. Eventually we decided to go at that head on. The book is about stealing, so we steal from the things we love. There is a ton of theft, homage, and tribute in comics all the time. We just wanted to be blatant with it.

Throughout the comic, the tone dances between pretty comedic – largely due to kids’ personalities – and pretty tense with a pretty dramatic confrontation being one of the big set pieces of the first issue. What’s it like trying to match those tones in the writing?

MR: I think it goes back to my feeling about character. If the characters feel real, if they have personalities, if they are cared about, then they are very versatile. If the creators care about the characters it should appear on the page. And if it does then the reader should care most of the time. And if they do then you can ask a lot of the reader. So taking funny people and putting them in tense situations, or taking intense people and putting them in funny ones, all of that can transition easily. I think that’s the big thing, making your characters an anchor readers can hold on to.

Paige is a kickass girl who is honestly way braver than I could have ever hoped to be at her age. What made her the right character to be at the centre of this story?

MR: She is the little kid I wish I was at her age. Paige is great because a lot of the things that are her strengths are also real problems. She sticks up for herself to her detriment, she is fiercely loyal to a fault, her imagination propels her down bad paths. She is self reliant and really smart, but also makes really bad choices sometimes. So on one hand she is this really cool, tough, and weird little kid who I think is awesome as hell. But on the other hand she pays a price for that. I had a teacher when I was younger who said “tragedy is your grandmother falling down a well. Comedy is someone else’s grandmother falling down a well.” Now, aside from that being an obviously fucked up thing to say to children, it is a fun simplification of how we process story. Paige may not be me, but she is close enough to what I wish I was that her story feels close and personal. It has moments of real tragedy because of that. But she isn’t me. She’s a weird little girl who gets into crazy situations and that allows for comedy. So on a practical level that is why Paige is the right choice for the lead of the book.

And on the other level, Paige is the leader. Every group of friends had one whether they know it or not. And Paige is theirs. Her life, the stuff she has been through and the stuff she is willing to do, makes her the engine of the whole group. Without her there can’t be a story.

Finally, let’s get real: D&D. What’s your race, class and alignment? ‘Cause I’ve always been partial to Chaotic Good Elven Rangers and I’m not sure why.

MR: To be totally honest I was much more of a Warhammer player than D&D, but I’d say Elf to start. And I guess I’m a Neutral Good Paladin. I believe in doing good, but I am not trying to be a cop.