So get this: these four kids walk into a bank, right? You won’t believe what happens next!

Matthew Rosenberg, writer of the excellent “We Can Never Go Home”, teams up with artist Tyler Boss for another comic at Black Mask Studios. With the unbelievably catchy title, Rosenberg and Boss create a crime caper that combines the spirits of films like Pulp Fiction and The Goonies.

Read on below for our full review of “4 Kids Walk Into A Bank” #1 to find out why you should not miss out on this one, but watch out for some mild spoilers. 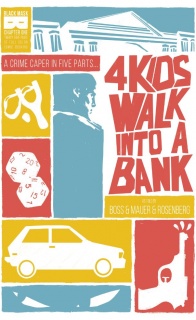 Written by Matthew Rosenberg
Illustrated by Tyler Boss
A FUN(ISH) CRIME CAPER ABOUT CHILDREN! 11 year old Paige and her weirdo friends have a problem: a gang of ex-cons need her dad’s help on a heist… the problem is those ex-cons are morons. If Paige wants to keep her dad out of trouble, she’s going to have to pull off the heist herself. Like Wes Anderson remaking RESERVOIR DOGS, 4KWIAB is a very dark & moderately humorous story about friendship, growing up, d & d, puking, skinheads, grand larceny, & family. As told by TYLER BOSS (Lazarus, Vice.com) & MATTHEW ROSENBERG (We Can Never Go Home, S.H.I.E.L.D.: Quake).

“4 Kids Walks Into A Bank” #1 is a comic that knows exactly what it wants to be and exactly who its audience is going to be. Before you even hit the first page of the comic there’s a reference to GoodFellas and Pulp Fiction. The first page opens up on a fantasy landscape of four brave adventurers attempting to defeat a mighty dragon. This is a pretty strong first impression, almost as strong as the title itself, and it shows that Matthew Rosenberg and Tyler Boss aren’t messing around here. This is a story about kids, about four kids, to be precise, and Rosenberg and Boss embrace that entirely and it’s entirely why the comic works.

Kids in comics are pretty exclusively written by adults, and that’s also the case here, but one of the reasons that “4 Kids” works is that Rosenberg and Boss embrace the disparate personalities of the four different kids. This is the beauty of the opening scene, which is revealed to be an visualisation of the kids’ Dungeons & Dragons game as it introduces the readers to the kids right off the bat; showing the personalities of the kids and how they interact with one another. This allows for a light, humorous tone from page one as the D&D session descends into squabbling. Rosenberg’s writing showcases the universal truth that most childhood friendships are spent arguing more than actually being friends. It’s a great opening scene that sets up everything you need to know about the characters right off the bat while sucking you in with some great humour.

Even as things take a turn for the dramatic and get darker and darker for the kids, that opening scene sets the tone for the comic’s humour. As the comic progresses, the mix of writing and art allows for some great comedic beats. There’s a panel that’s essentially a cut to black with text alluding to the violence occurring. It makes the impact of the violence all the more impactful. This is followed up on the next page by a great sequence of four panels lined up in a row showing a slingshot, a D&D miniature, an eye, and the reaction panel of just a sound effect of the reaction to getting shot in the eye, another way that Rosenberg and Boss playfully showcase the impact of violence in the comic by not directly showing it. It’s inventive and playful and gives the comic an almost ’80s movie vibe which belies the much more serious danger of the situation.

Speaking of the artwork here, I’m trying my very best not to make a “Tyler Boss is a boss” joke even though it would be entirely appropriate. Though Boss’s linework is pretty simple, it is also lively and full of character thanks to intricate panel layouts. Pages routinely have somewhere between six and eight panels, some even going up to thirteen, which gives the artwork a sense of flow that works perfectly with the sprightly, back-and-forth dialogue. This is one of the reasons the aforementioned four panel sequence works as Boss uses the artwork to slow down the action and break down moments in time so the reader can see how a situation is built which emphasizes the violence without actually showing it.

Boss’ artwork is coloured Clare Dezutti and the colours are pretty much perfectly executed. The colours are flat, meaning there’s not much in the way of intricate shading or layering, leaving the definition from Boss’ inks. Combined with a pretty warm palette this is the perfect match for Boss’ simple linework, as it doesn’t drown out the details of the artwork while keeping everything feeling naturalistic and warm. This does mean that many of the characters seem to be wearing similar shades of burgundy, but that’s something I’m more than willing to accept given the fact that the comic seems to be set in the ’70s or the ’80s.

All in all, “4 Kids Walk Into A Bank” is a comic that definitely lives up to the strength of its title by combining the styles of ’80s kids’ adventure and gangster movies. This is a comic that lived and died based on how well conveyed the kids were, and Matthew Rosenberg and Tyler Boss nail their disparate personalities and create some fantastic humour in the interactions between them all. Tyler Boss’s simple linework and intricate panel layouts creates a very interesting comic to read that keeps a lively nature that hides just how dark the story can get and is brought to warm, rustic life by Clare Dezutti’s colours. It looks like this is another must-read comic put out by Black Mask Studios, a publisher who must be batting a thousand by this point.

Final Verdict: 9.6 – A fantastically funny comic that hides a dark side. Please don’t miss this.