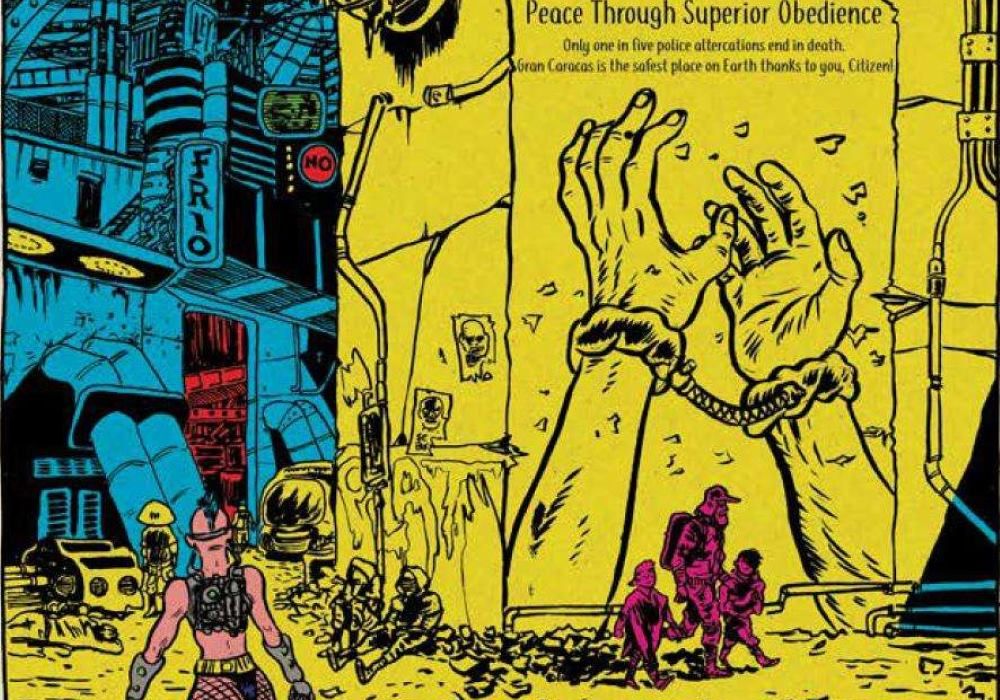 Dave Baker is a comic book artist, writer, lover, and critic. We’ve talked with him in the past about his hilarious but inarguably compelling project “Shitty Watchmen.” Later, he gave us his thoughts on the state of the comics industry and told us about the work that went into “Action Hospital.” Now he’s back with a new project: a dystopian Cyberpunk comic called “Night Hunters.” We talked about his process, his influences, and about the Cyberpunk genre in general. He also was kind enough to share some pages from the book. Check them out, and let us know what you think!

In a few words, what’s your new comic, “Night Hunters” all about?

The heyday for Cyberpunk was probably in the 80s and 90s. Do you think its inherently a retro-genre, like two-fisted adventure serials? What are you and Alexis doing to bring the genre into the present?

DB: The cyberpunk genre grew out of a rapid expansion in the cultural awareness surrounding technology and futurism. That’s something that never goes away. And, honestly, is back bigger than ever, currently. Technology is always evolving and changing. Using the tropes of the genre that initially critiqued the expansion of technology to re-critique it today feels very apt. Also: there’s a lot of fascist iconography in how Cyberpunk has evolved. Bio-soldiers, futuristic weapons, and technologically advanced rebreathers. They were originally mean as a symbol of the individual, but were subsumed by larger, usually governmental, forces. These images are hardwired into the genre and we’re trying to turn them on their head and use them to critique the systemic oppression of the lower classes. It would be really easy to make something like Universal Soldier, which is ostensibly Military Porn, but we’re doing the opposite.

You’re someone who’s very conscious of the medium you’re working in. What sort of thought goes into your panel layouts when creating a world like this?

DB: I love comics as a medium. I’m always thinking about new mechanics and ways to push the boundaries of the artform. In all honesty, my goal for this project is to write the best goddamn Alexis Ziritt comic ever published. Alexis has drawn some great books, but I want to push him to make the best work of his career. As such, I’m purposely setting things up to give him the best most Alexis-y stuff to draw. He’s amazing at galactic action, as we saw in Space Rider, and cool fumetti inspired characters, as we saw in Tarantula, but for Night Hunters I want to put his world building skills and illustration prowess dead center. He’s an extremely skilled draftsman. I know that give the time and space to make this book, he’s going to knock it out of the park. Shit, he already has. Have you seen the preview pages? They’re amazing.

Cyberpunk is about the intersection of politics and technology. You made this Cyberpunk story all about policing. I’ve got a lot of thoughts and assumptions as to why, but… why? Were you inspired by a particular event or experience?

DB: Why would I make a comic about the rampant misuse of power and the militarization of our police force? Yeah, you could say it might have something to do with current affairs. The rise of far right wing politics across the globe. The increased pressure on governments to violate citizen’s rights, the rise of the private prison industrial complex, the massive uptick in police shootings, the proto-military aesthetic that many police forces are taking, and the simple fact that our laws are being strip-mined to enrich the 1%. To say nothing of the political landscape of Venezuela right now. Alexis is from Venezuela. This story comes from him. We molded it together and a lot of the socio-political overtones are me, but I feel like the position we’re coming from is fairly apparent.

I’m a big lover of cyberpunk in all its forms. So if you had to pick personal favorites, what would be your favorite Cyberpunk movie? Novel? Music? Game? And I know you love comics, so how about your top three biggest Cyberpunk comic book influences.

DB: Alexis and I are both big genre nerds. When creating this project we heavily discussed Cyber City Oedo 808, Appleseed, and Robocop. We also discussed at length the Charlie Band produced and Albert Pyun directed film series Nemesis. If you have seen it, do yourself a favor. The first film in the series stars the kickboxing champion of the world at the time Olivier Grunner. it features a kit-bashing of Robocop, Blade Runner, John Woo, and Ray Harryhausen. It’s amazing. There’s an energy and a freneticism in the film that Alexis and I really connect with. There’s also an ineptitude that’s very endearing. As for the second part of your question, there are a lot of good Cyberpunk comics. But there aren’t a lot of great cyberpunk comics. The top ones for me are Appleseed, Channel Zero and Ronin. I also really love the work of Josan Gonzalez aka DeathBurger. His The Future Is Now books area amazing.

I think the ultimate goal for Alexis and I is to make a comic that feels like a bootleg comic of a really popular franchise that you find in a dusty dollar bin at a flea market. You take it home, you forget about it and then when you read it, it almost supersedes the original thing in its execution. Like Night Hunters is kinda like if you took Robocop and ran it through a Lady Terminator or Robo Vampire filter and somehow ended up with an even more searing social satire. Or, at least, that’s the goal anyway.

Where can people find more of your work?

And if you want to see what Dave is talking about, here are some images from the opening pages of “Night Hunters!” 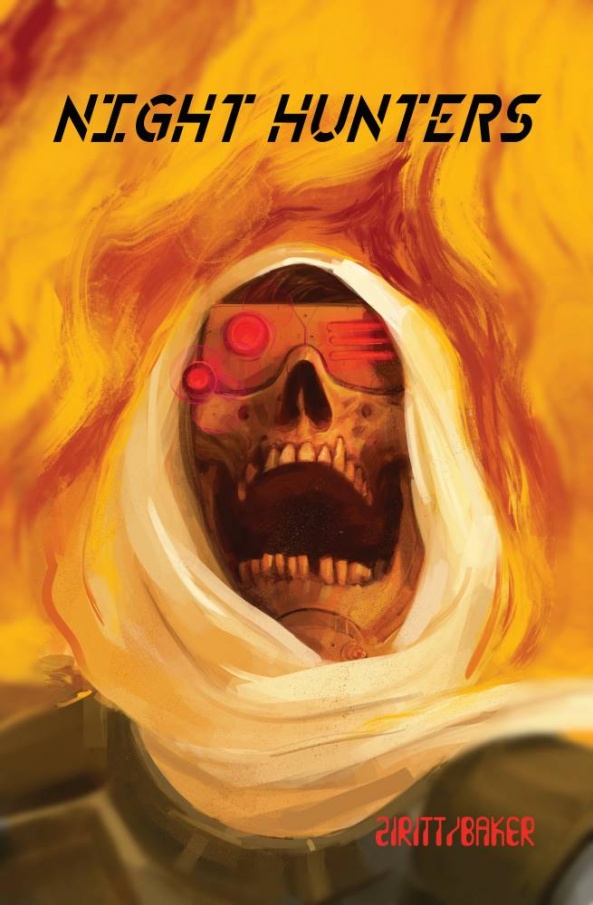 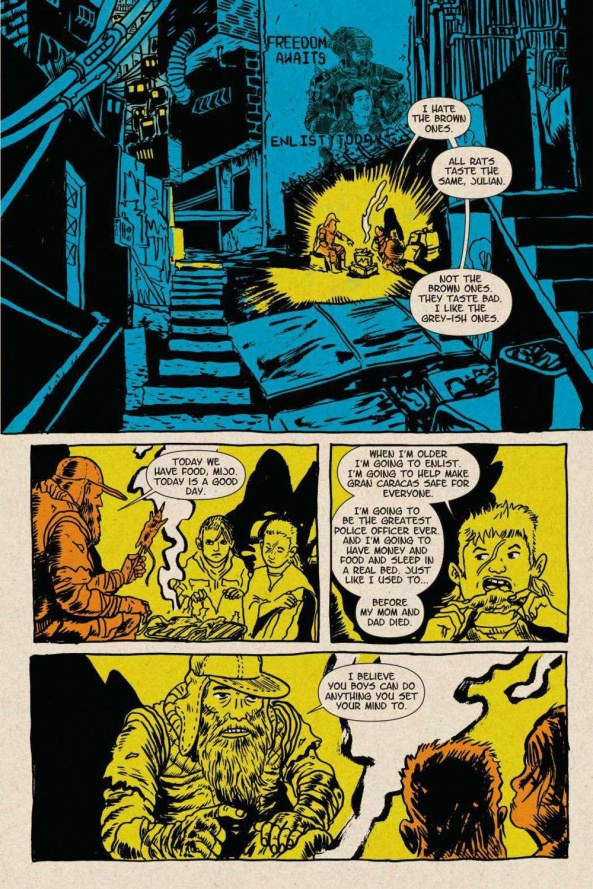 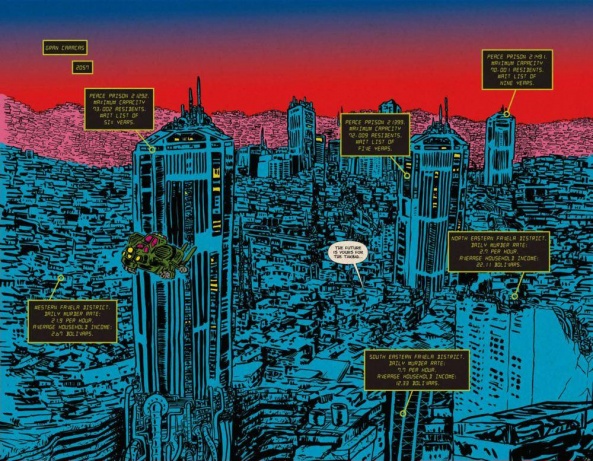 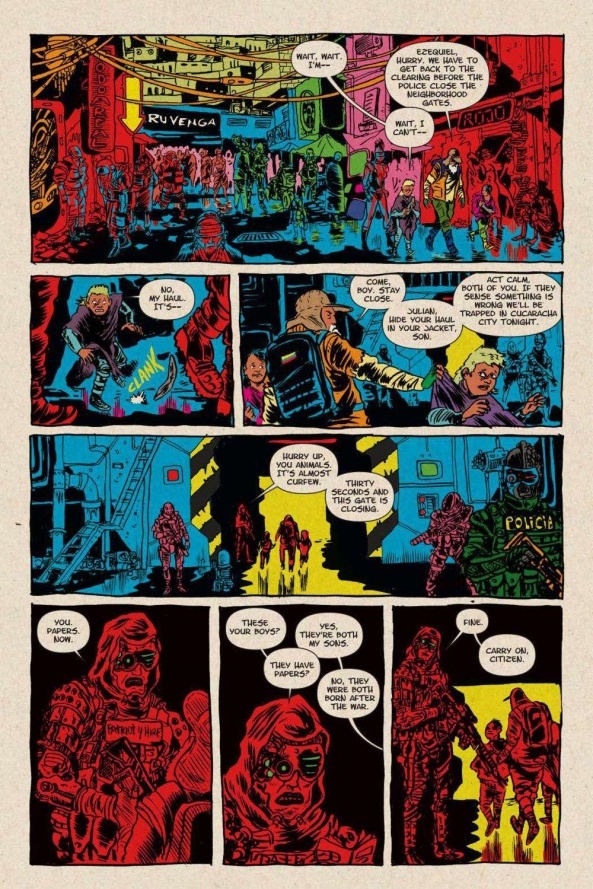 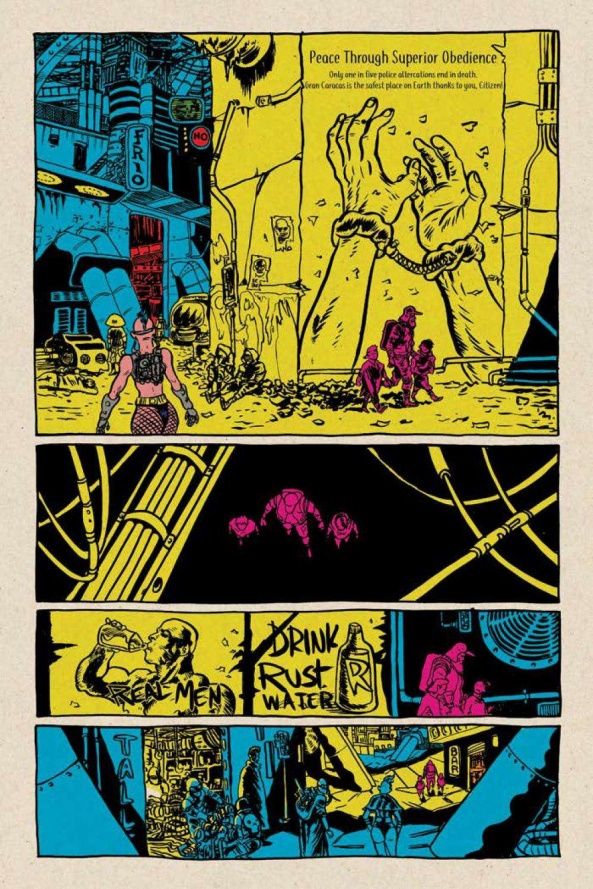 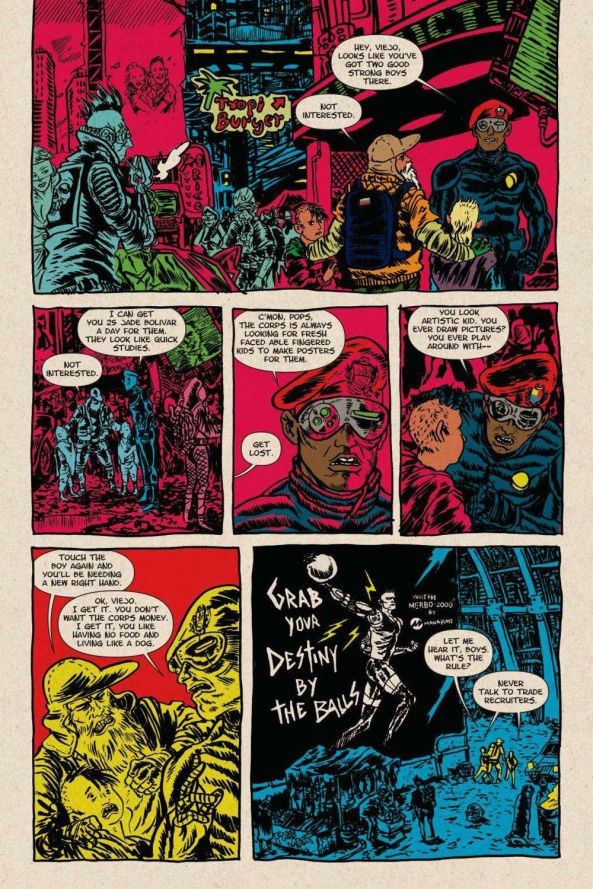 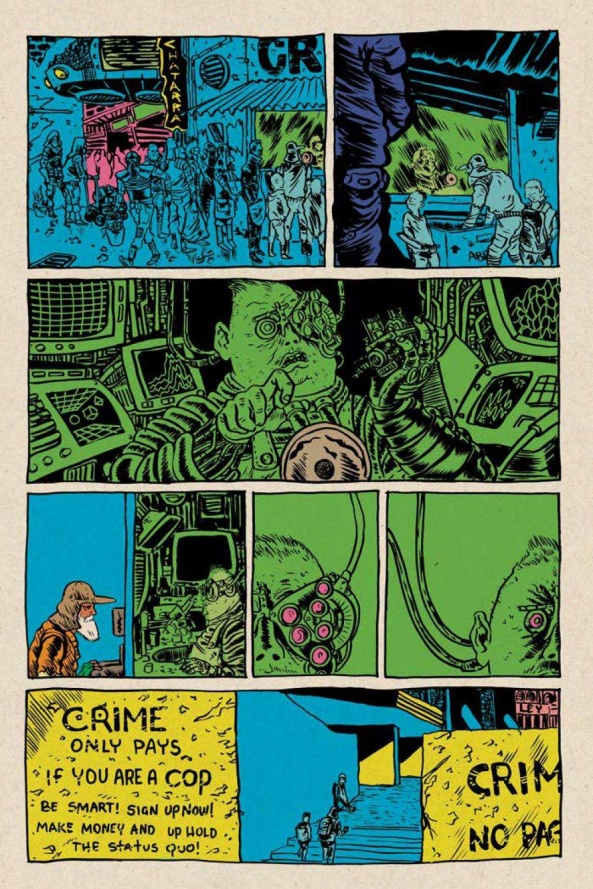 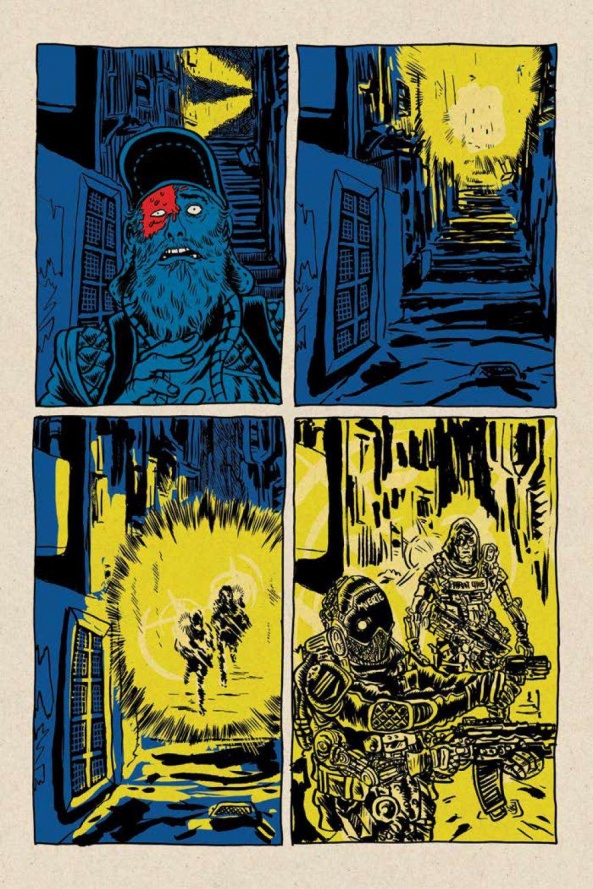 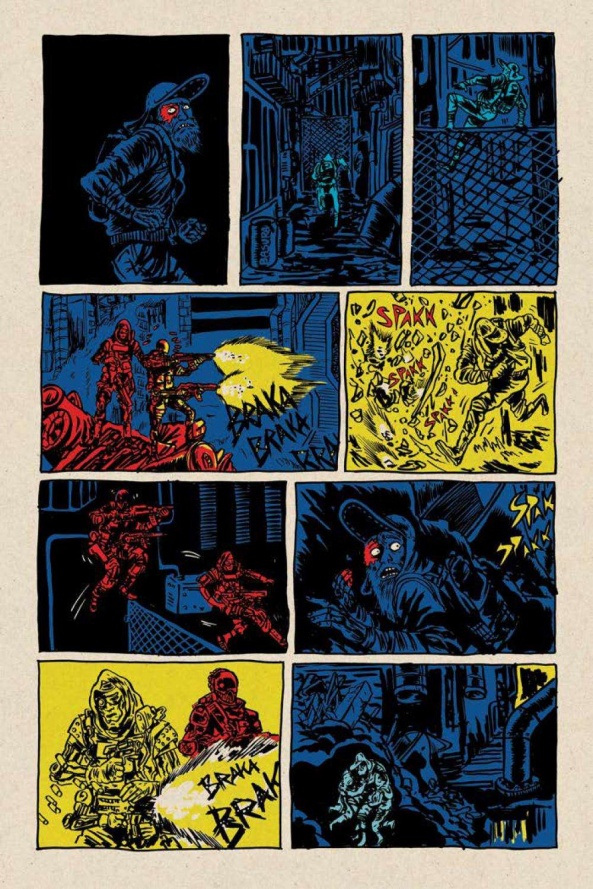