In order to translate horror to the comic book page and tell a unique story, sometimes (as we learned from the musical Gypsy) you gotta have a gimmick.  For artist Ken Perry’s series with Devon Wong and John Hunt, “Wretched Things” takes a page out of the animated classic The Secret of N.I.M.H.  – – using mice to be cute and creepy at the same time.  He carries this spirit over into his other stories, such as “Next Dance” which blends romance with darker undertones to tell a story of grief and renewal.

At Terrificon, I chatted with Ken about these two particular projects, as well as some of his other artistic influences, including his work in other media.

The first thing I found out about you is that you’re a comic artist and you’re a firefighter. And that’s a little fun cobble of careers. Tell me which one came first.

Ken Perry: I don’t know. I always wanted to do the two when I was growing up. I wanted to be a firefighter. I wanted to be an artist. I got a degree in painting and sculpture. I did graphic design for 10 years. Then I got on the local fire department where I live and I’ve been doing that for 13 years. I always do the art on the side, but now, I’m kind of doing both things.

Were you a comics fan before you became an artist?

KP: Yeah. My first comic book, when I was five years old, I went with my grandmother to get her prescriptions at the pharmacy and if I was a good boy I could go into the spinner rack and get that. It’s been downhill since that.

What were you some of your favorite characters, stories, series – – either as a child and even as today as an adult?

KP: I grew up in the 80s, in the early 90s, so it was all like the X-Men, things like that. The high fantasy of Conan the Barbarian books, those are great. Also “Savage Sward.”

Your book with Source Point Press is “Wretched Things,”which looks like a dark, twisted version of The Secret of N.I.M.H. Tell us the premise of the story. 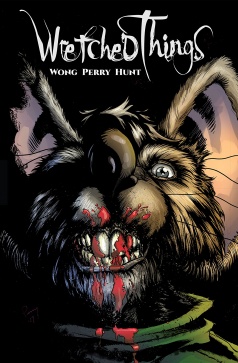 You had this old Victorian House. It’s been abandoned for a while. The vermin take over the house. The rats, the spiders, the centipedes. A young couple buys the house. They tried to move in and renovate it, get rid of the vermin. But the vermin rise up against them. They’re tribal. The rats don’t like the spiders don’t like the mice, but they have to put their differences aside and rise up against the humans.

KP: And the writer, Devon Wong, he’s big into political science. So there is that underlying subtext. When he wrote it was around the time of the Arab Spring. So he has a lot of anti-extremism in there.  It’s almost like Animal Farm, where you can read it at different levels, depending on how deep you want to get into it. You get the one spider who’s  like a Che Guevara who goes on like his little monologues. And she has her own agenda and she uses the other critters in that house to meet her ends, which aren’t the greater good.

The artwork in this book is all black and white and that seems to be in terms of your comic art, the medium you prefer to work in. What is it about black and white that you love so much?

KP: I did the black and white and John Hunt did the color.

KP: Yes, there is color. I just wanted it to be gritty and dirty, like the old house it’s supposed to be in. That was my end of the yard. I like to play with the scale cause you have these little critters in this big house. Drop it down to their world or the house looks like a universe. But then I would pull back to the house scale, the human scale and the critters were small. It was just fun playing with the different scales, moving the camera around to show the different angles.

What are some of your artistic influences that you’ve pulled in as you’ve created these worlds?

KP: I had so many growing up. I was a child of the 80s and late 70s. But back then it was all the 70s comic books. You had a ton of Neil Adams and stuff like that and Klaus Janson, Bill Sienkiewicz, guys like that, John Buscema. I mean all the greats. And then you had Image hit in the early nineties, so you had all the lines and the triangles via Jim Lee, [Joshua] Williamson style art. I try to do my own thing. I love black as you can tell. So I try and make it dark and gritty.

You’re not just a comic artist, you do other media, you do sculpture, you’ve done scrimshaw, you’ve done painting. How has each influenced the other, if at all?

KP: I think you can pull a little out of everything. I like the storytelling end of comics, and I always try to tell a story. Like in my sculptures, I used to do Greek mythology, but I do it all with like rebar, outlines of shapes to try and like tell the story. It’s very gestural.

Which character in comics today that you look at and be like “damn, I want to write this character.”  Who would that be?

KP: I’d have to say Daredevil. I’d love to write and draw it just because it speaks to me. He was raised Catholic and I was raised Catholic, went to Catholic school kindergarten through high school.  It spoke to me, his mission, how he always has that Catholic guilt. I’ve long gotten over the Catholic guilt, but I can relate to it. And he grew up in the city. I grew up in a city. He grew up in a not good side of the city, and so did I, in my city. I didn’t grow up in New York, but I grew up in a smaller city, Fall River, Massachusetts, that has its own crime and its own problems.

Is there any spin you’d want to put on Daredevil that isn’t out there already?

KP: I think I would just go to his mental breakdown. Like when is enough enough? When do you finally cross the line and go too far from vigilante to your own justice, the final justice?

KP: That’s how it started, the whole four issues.

KP: I met Devon through Comics Experience. Okay. It was a great forum run by Andy Schmidt. He was an editor for Marvel, IDW, he did “Transformers,” “GI Joe: stuff like that. He runs a community, Comics Experience, and it’s all comic creators. He’s got professionals on there like Reilly Brown, Nicole Boose, who’s an editor for Millarworld. She’s worked at other places too, I believe DC. And they get together. We all collaborate, we all critique each other’s work. And you have professionals on there who give you their honest opinion, which is valuable. Don’t just sugar coat it. You can tell me what you like, but tell me what you don’t like too. Don’t hold back. And I met Devon through there. Andy is actually our editor, initially our publisher. And he got us actually through a deal on to comiXology Submit, under his label. There was a bunch of books that we did that way. And then Comics Experience went into Source Point Press.

You’ve done a few other projects, some one-shots, some stuff that’s been Kickstarted – – in particular, “The Next Dance,” which I’ll call it a non traditional love story. Tell us a little bit about that one and where readers can get that today.

KP: It’s not your typical comic book at all. It’s not action. It’s not adventure. It’s basically the tale of a widow and her journey and her emotional recovery from it. It’s a lot of emotion. I played a lot of that into the artwork. It’s very dark. It’s a lot of facial expressions and reading the facial expressions and her interactions.  They can get it through me or Anna Leue, who’s the writer. We’re still trying to find a permanent home for it.

Anything else in development that you can share with us?

KP: I’m currently working on [webcomic] “Shelter Division” with Bob Salley. It’s basically in the X-Files theme. We have a secret government agency that has Bigfoot,  the Roswell alien and an immortal working for them.

“Wretched Things” is available directly at Source Point Press’s website and on comiXology. More of Ken’s work is also available on his website.