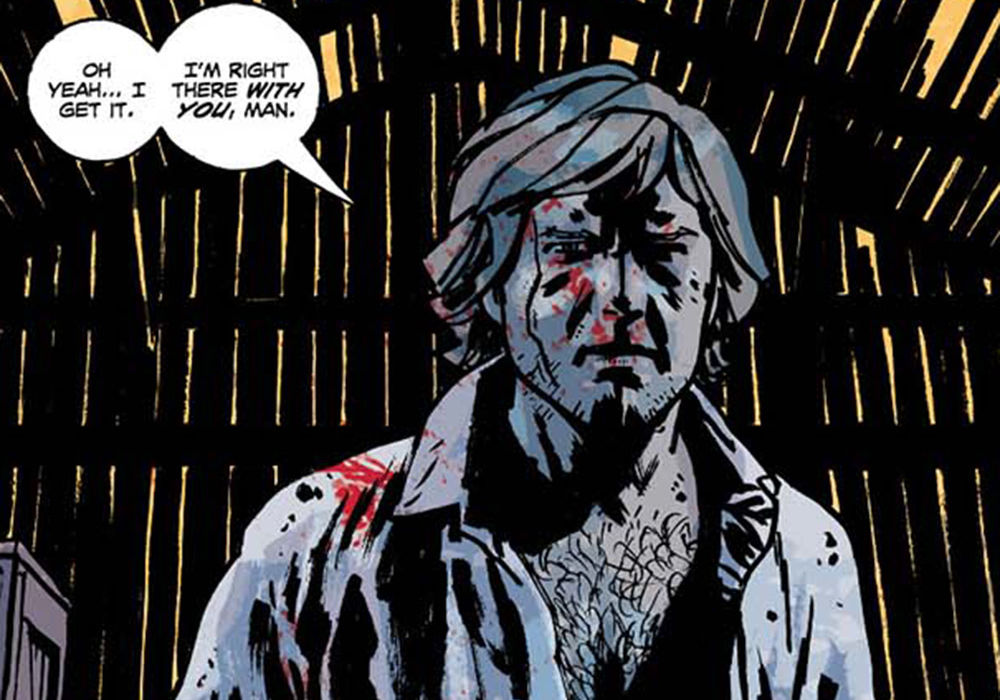 Multiversity is no stranger to Ed Brubaker and Sean Phillips’ recent comics. From “Criminal” to their first OGN “My Heroes Have Always been Junkies” to their last OGN “Pulp”, it’s safe to say we’re big fans so we are very excited to bring you an interview with Brubaker about their newest, and most ambitious project thus far, “Reckless.”

While “Reckless” isn’t your first foray into graphic novels with Sean, it is the longest you’ve released to date, and perhaps the most ambitious, as it’s the first in a series. What was the impetus for doing this not in the traditional monthly format but in its prose counterpart’s traditional format of, well, full-length novels?

Ed Brubaker: Part of it was that the market was shut down, and we had no idea how long it would be closed, so we figured if we did a graphic novel we could at least keep working. Then when the market was back, we’d have most of a book finished already. Which is exactly what happened.

I’m not sure we’d have made the leap in such a big way if not for that shutdown, though. After “M Heroes Have Always Been Junkies and “Pulp” I really wanted to do more original hardbacks, and to do something longer, for sure, but I don’t know that we’d have had the guts to just change our entire publishing plan like this. Which, at the time we started “Reckless”, we’d just had “Pulp” delayed, so we had no idea that it would be such a big hit.

This is kind of a dream project for me. Ever since I saw Darwyn Cooke’s adaptations of “Parker” into graphic novels I really wanted to do something like that, a series about a pulp character that just comes out straight in book form. Each book tells a whole story, but the character goes on to more “adventures.” I thought it would be fun to do something like that, our version of that kind of paperback pulp hero, a bit of escapism, and someone to root for… but since it’s me and Sean doing it, it’s still kind of dark and fucked-up.

Is the pace more or less taxing for you, Sean, and Jacob doing it this way? Or is it about the same when factoring in the longer breaks between books?

EB: We’re working faster, doing these books. It’s a lot to tackle, since we decided to do three in a row without a break. Sean finished “Reckless” and painted the cover for “Friend of the Devil” a couple days later, then started drawing that book the next day. Luckily we’re in a pandemic, so neither of us are taking vacations.

But I think it’s also that the work is going faster because it’s all one long story we’re making, and not having to stop every month and do a new cover and solicit. All that stuff cuts into the flow, and so far it’s all flowing really well. I love being able to do shorter chapters, and I found myself waking up every morning looking forward to the next chapter, as the momentum kept building, and Sean’s pages kept coming in.

We’re lucky, of course, that both of us are very motivated, and we’ve got a nearly 20 year track record of putting out books, so I knew we could take on a 144 page book and get it out on time, and put the next one out four months later, since we had some lead time. But even for us, this is a crazy amount of productivity.

How much of Ethan Reckless, the titular character’s, life and arc do you have established beyond what’s revealed in book one? Have you left any intentional holes for yourself that you may or may not revisit down the line?

EB: I know most of his history, but part of the fun of doing these books is that each one takes place years after the previous one, so we get to watch him aging and going through the changing times of the 80s and into the 90s. It’s all written from our present day’s POV, looking back at his past, so as we get to see him growing through the books, I leave a lot to figure out with each new book. You have to do that, or you’d get bored writing about your characters.

Should we expect Ethan to be the center of every book or will the side characters get a chance to take the spotlight?

EB: Oh, I’m not sure. I’d love to do a book about his assistant/sidekick, Anna, at some point. And I might have a few different POV characters in a book down the line, to play around with the format. The series is a bit of a twist on this genre, using a lot of the tropes but flipping them around, so I imagine we’ll keep experimenting with that stuff the more of these books we do. I have ideas for about five books so far, including this first one.

You’ve said before you wanted “Reckless” to be a throwback to the crime novels with a central character but standalone adventures: Sherlock Holmes, Easy Rawlins or Parker come to my mind as analogous examples. How much of that decision do you think is nostalgia or is it more a more sustainable format for a graphic novel series?

EB: I think it’s a bit of both. I’d been finding myself reading a bunch of old pulp series character books in the early days of the pandemic shutdown, and really enjoying the escapism of that. The comfort of these short books, many of which I’d read before – Like Lew Archer, or Travis McGee, or Parker books – and it just occurred to me that Sean and I had never done a character that was just a good guy. Or our version of whatever that means.

And I thought it would be fun to use the trappings of that era and genre — like the cover is right off the racks of the 60s and 70s paperback racks, you know? — but to make it feel more like our stuff, a bit more modern, or post-modern maybe, in its sensibilities. It’s from that era, but it doesn’t feel dated like a lot of those books do, and it’s written from our day, looking back at what were pretty bleak times in our country… although now we mostly think of the 80s as a golden age, because we’re so much more apocalyptic now.

I’m not sure it’s more sustainable to do graphic novels with recurring characters like this or not, honestly. It’s pretty standard for mainstream book publishing, and European comics have a lot of graphic novels that follow characters, but other than Darwyn’s “Parker” books, there haven’t been many attempts at this kind of thing in US comics. But so far our orders for this are better than “Junkies” or “Pulp,” which were both huge hits, so I’m keeping my fingers crossed.

The big hook I think is knowing that you don’t have to wait a long time for our next book. There’s no cliffhangers or anything like that, but if you dig “Reckless” then you can check out the next book just a few months later. That’s one of the reasons I love series characters so much. Because you get to see what they get into next, book after book.

You’ve become something of the premiere crime/noir thriller writer in comics and I’ve noticed that your projects, including “Reckless,” center on watching someone’s life just…break because of their actions. Do you find that to be an essential characteristic of the genre, the type of person that ends up a crime/noir protagonist or just a facet of your interests?

EB: Honestly, I’m not very analytical about this stuff. I just write from my gut, and follow my instincts about what I feel like I want/need to write about. “Reckless” partly grew out of the idea of how memories and feelings fade, and how someone you once loved can be forgotten, and how that can feel like a betrayal even though it’s just the natural course of life. That feeling grew into a character, which ended up being Ethan Reckless, and the other parts of the book grew out of figuring out who he was, and what his history was. And of course, some of his history let me write about parts of our recent history that I’d be fascinated by a long time, since I was a little kid watching the news in the 70s.

But I would say, just on instinct, very few crime stories or mysteries are not about broken people. All people are broken people to one degree or another, anyway. Even Sherlock Holmes was a junkie.

In addition to “Reckless” you’ve got a project with Marcos Martín over at Panel Syndicate called “Friday.” How’d that come about? Do you think you end up flexing different writing muscles when crafting with Marcos than Sean?

EB: “Friday” came about because Marcos emailed me out of the blue to ask if I wanted to write something for him to draw, and I responded immediately saying I did. And then I thought about it for about five minutes and pitched him the basic concept. I’d been toying with the basic idea of a post-Young Adult character for a long time in my notebooks, but I could never crack it until I thought about seeing her drawn by Marcos. Suddenly it all clicked into place then, and I realized it needed to have that mix of horror and mystery, like a grown up version of Edward Gorey smashing into Lovecraft, and examining that whole teen detective concept in a fun way.

So far it’s been a great experience, working with Marcos. I think the only real difference between writing that and writing my books with Sean is that it’s more of a teen horror thing, but I think it still feels like my voice. It’s still a character-driven thriller. Just with some creepy elements around the edges.

To close us out, what’s been the most fun part of “Reckless” thus far?

EB: Probably seeing the cover come together. I had a vision in my head that I tried to articulate to Sean, but he just completely blew me away. It’s maybe my favorite cover painting he’s ever done. And getting the box of books from the printer was a lot of fun. It’s always so great to hold the book in your hands and see there’s no mistakes.

This is a really special book to us, so we went all out on the design and printing.

“Reckless” is out now from your local bookstore, comic book shop or favored digital retailer. “Friday” can be found for pay-what-you-want on Panel Syndicate.